Centrist Senate Democrats are raising concerns over Democratic leaders’ plans to assemble a package of $3.5 trillion in spending and tax cuts, even if offset by other sources of revenue and savings. Because Democrats cannot afford to lose a single vote from their own caucus in the evenly-split Senate, that means that overall spending level will likely have to come down, either by excluding or shortening the length of some proposed programs.

But in the House, committees are drafting and voting on Democratic-written bills that total roughly $4.5 trillion over a decade, according to congressional aides familiar with cost estimates of the bills. That widens the gulf between where liberal Democrats and their centrist counterparts want to land—with no one ready to make big concessions yet.

Democrats on the House Ways and Means Committee on Tuesday moved closer to finishing work on their portion of a $3.5 trillion budget reconciliation bill and said they expect to vote Wednesday to advance the legislation.

Congressional Democrats are aiming to quickly approve the legislation, known as the Build Back Better Act, so the full House can put its stamp of approval on the economic relief that President Joe Biden proposed in his American Families Plan. The legislation raises new revenue from changes to domestic business provisions such as increasing the top corporate tax rate to 26.5% and limiting the deductions for interest expense.

House tax-writing committee debates over $1 trillion in tax cuts for reconciliation bill - Jay Heflin, Eide Bailly. "At this point, it is not clear if the House’s majority party has the votes to pass the budget reconciliation bill or the $1.2 Bipartisan Infrastructure Bill. The reason: passage of one bill depends on the passage of the other and certain lawmakers disagree on which bill should be voted on first."

The House plan would reverse the doubling of the estate-and-gift tax exemption that Congress created in 2017. That increase would end after 2021 instead of expiring at the end of 2025. The exclusion would likely fall to around $6 million per individual from $11.7 million. Estates surpassing that threshold, after charitable donations and other deductions, would be subject to the tax, which has a top rate of 40%.

The Democrats’ proposal also limits popular techniques used to keep estates below the estate-tax threshold, including some uses of grantor trusts. Many wealthy families minimize tax bills by placing assets intended for heirs into these vehicles.

The average tax rate paid by those earning $1 million or more a year would soar from 30.2 percent to 37.3 percent in the year after a proposed $3.5 trillion tax package from Democrats would go into effect.

That amounts to a 10.6 percent increase in the tax rate for that top group of earners, according to a Joint Committee on Taxation analysis released September 14.

But by 2027 the numbers turn ugly for every income group except for those earning less than $30,000 a year, the JCT found.

Democrats target cigarettes and vaping as potential sources to pay for $3.5 trillion economic package - Tony Romm, Washington Post ($). "The group said this week that Democrats’ plan also could make a marked difference at a time when e-cigarettes, which are untaxed at the federal level, are increasingly on the rise among millions of younger Americans — so the new taxes could further deter their use as well."

40-plus tax increases: A rundown of House Dems’ $2 trillion tax plan - Brian Faler, Politico. "Democrats are not proposing to completely reverse that corporate rate cut — they’d push it back up to 26.5 percent. But they are also tightening those taxes Republicans created on multinationals’ foreign profits and adding a few others. The combined result is a $963 billion tax increase on corporations, according to official estimates — which businesses complain is almost three times the tax cuts they received in 2017."

JCT: House tax plan targets rich, but $400K pledge under stress - Laura Weiss, Roll Call. "Through the rest of the decade, people making less than $400,000 could see their taxes go up slightly, never by more than 1.5 percent, according to JCT’s analysis."

The provision aims to force ultrawealthy individuals to pay taxes on money that could otherwise largely escape taxation, particularly in the case of individuals who funded their Roth IRAs with shares of stock in start-up companies before the stocks could be sold to the public. The strategy was highlighted by ProPublica in a June article revealing that Peter Thiel, a founder of PayPal, had used it to build a Roth IRA valued at more than $5 billion.

The legislation targets that strategy by prohibiting an IRA owner from investing their account into an entity that they don't own but have a substantial interest in, and would disallow IRAs from holding a security if the issuer of the security has a condition on the holder of the account’s status. IRAs holding investments that are securities that haven't been registered under federal securities law would lose their IRA status. The bill would have the change go into effect at the end of 2021 but would provide for a two-year transition period for IRAs already holding such investments.

Clean Energy Strikes It Rich With House Dems' Tax Proposal - Keith Goldberg, Law360 Tax Authority ($). "The House proposal includes a direct pay option for the PTC and ITC that will essentially allow developers or investors to receive their tax credits in a lump-sum rebate. Experts say a revival of a post-2008 financial crisis program, where renewable project investors could collect cash grants instead of federal tax credits, could help widen the pool of potential investors and make smaller-scale projects more attractive since smaller developers generally have a tougher time attracting, or affording, tax equity investment."

Congress Targets $10M Qualified Small Business Stock Tax Break - Robert Wood, Forbes. "But now, the Ways & Means Committee has proposed slashing QSBS benefits for high income persons. A proposed amendment would change section 1202(a) so the 75% and 100% exclusion rates for QSBS gains will not apply to taxpayers with adjusted gross income of $400,000 or more.  The baseline 50% exclusion would remain available for all taxpayers. The amendment will apply to sales and exchanges after September 13, 2021, subject to a binding contract exception."

Neal’s Tax Bill Is Big And Bold, With Hits and Misses - Howard Gleckman, TaxVox. " Lawmakers used to at least give the idea lip service. But this draft seems to go out of its way to add complexity to the tax code. In part to keep Biden’s promise to not raise taxes on households making $400,000 or less, the bill is replete with thresholds and phase-outs. To say nothing of new special interest tax breaks it creates. A tax credit for local newspapers to partially offset payroll? Really?"

Top Combined Capital Gains Tax Rates Would Average Nearly 37 Percent Under House Dems’ Plan - Erica York and Alex Muresianu, Tax Policy Blog. "That would be the highest federal tax rate on capital gains since the 1970s—and it would be above the generally estimated revenue-maximizing rate of 28 percent. The proposal should also be considered in the context of state-level capital gains taxes, which most states levy." 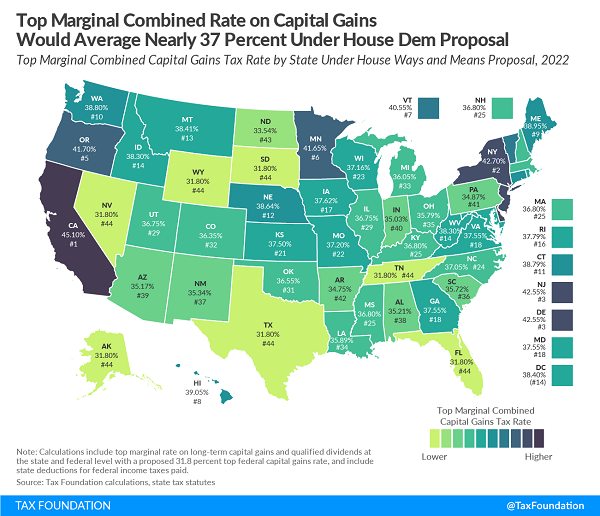 Eric B. Sloan of Gibson, Dunn & Crutcher LLP told Tax Notes that revaluations are “wickedly complicated” when the issue involves multiple layers and guidance is absent.

“Unless the government is prepared to issue meaningful guidance that will make it administrable . . . this proposal has the potential to kill partnerships” as viable business entities, Sloan said of the provision housed in a newly created section 704(f). The biggest companies will be able to pay accountants and other professionals to maintain databases tracking all the moving parts, but everyone else will face a level of complexity forcing them to either abandon using partnerships or simply not comply, he added.

Related: Partnerships and the Year 2021.

Energy-Efficient Contractors Get A Benefit with the Extension of 45L - Joe Sawatske, Eide Bailly. "45L is a section of the Internal Revenue Code that provides a tax credit of up to $2,000 for each qualified energy efficient residential dwelling unit. Residential properties potentially qualifying for the credit include single family and multifamily residences with three or fewer above-grade stories."

Legislation enacted in December extended the WOTC through the end of 2025. This long-standing tax benefit encourages employers to hire workers certified as members of any of ten targeted groups facing barriers to employment. With millions of Americans out of work at one time or another since the pandemic began, the IRS noted that one of these targeted groups is long-term unemployment recipients who have been unemployed for at least 27 consecutive weeks and have received state or federal unemployment benefits during part or all of that time.

IRS Not Looking at ‘Small Potatoes’ Easement Cases - Kristen Parillo, Tax Notes ($).  "'We’re looking at situations that are grossly overvalued, and it’s not just a little bit — these are the outrageous situations,' Lois Deitrich said during a September 14 webinar sponsored by Strafford.

You're celebrating just by reading this. Today is National Online Learning Day. I assume the party will be a Zoom event.