A report released Monday by the Treasury Inspector General for Tax Administration found  the federal government has paid at least $42 million in interest on NOL refund claims in fiscal years 2020 and 2021. The CARES Act of 2020, passed in the early months of the COVID-19 pandemic as a way to provide quick relief to taxpayers, made several modifications that temporarily repealed some of the restrictions imposed by the Tax Cuts and Jobs Act of 2017. The temporary repeal gave taxpayers an opportunity to carry back losses, which were previously limited.

The emergency pandemic relief granted in the Coronavirus Aid, Relief, and Economic Security Act allowing refunds for net operating loss carrybacks to prior tax years was enacted in March 2020 specifically “to provide fast and direct economic assistance.” Yet by virtually every measure, the implementation of that promise fell far short, a Treasury Inspector General for Tax Administration report released September 12 shows.

After the CARES Act was enacted, eligible taxpayers could claim the NOL relief by either filing a Form 1045, “Application for Tentative Refund,” which allows taxpayers to obtain an upfront refund even if the original return with the NOL hasn’t been fully processed by the IRS, or by filing a Form 1040-X, “Amended U.S. Individual Income Tax Return.”

It wasn't just your refund that was slow to arrive.

The IRS’s Inability to Timely Process Noncorporate Applications for Refund of Net Operating Losses Under the CARES Act Delayed Taxpayer Refunds and Cost Millions of Dollars in Additional Interest - TIGTA. "The IRS is statutorily required to process tentative refund applications within 90 days. However, the number of Forms 1045 considered over-aged (i.e., not processed within 90 days) increased from 900 in Fiscal Year 2020 to 7,585 in Fiscal Year 2021. The cases remaining in ending inventory (i.e., not processed by the end of the fiscal year) went from 1,626 in Fiscal Year 2020 to 8,974 in Fiscal Year 2021. The overall impact has been negative for both taxpayers, whose potential refunds have been delayed, as well as the Federal Government, which must pay the accumulated interest due to taxpayers on these delayed refunds."

Who exactly? That seems to be a rather closely guarded secret. Bloomberg also noted that Democrats on the Hill appear interested in someone with bipartisan credentials.

But whomever it is, November 12 — Rettig’s scheduled final day — is going to be here before you know it. Congress still has to get the government funded by the end of the month, and lawmakers will of course be mostly focused on the midterms over these next eight weeks.

The way in which the tax is structured — and the absence of fixes to current flaws in the research credit — may mean that only small businesses with specific characteristics can take advantage of the expanded benefits.

Related: How R&D Can Help Startups Gain Return on Investment.

Clean energy projects currently require tax equity because most developers have limited tax liability to directly claim the credits. Selling the credits through the transfer market avoids the complications and risks often involved with such transactions.

"The new book minimum tax means large corporations will be looking for a way to minimize their liability, and the enhanced, expanded availability of clean energy credits under the IRA would make for a logical match," said Liam Donovan, principal at Bracewell LLP. "The flexibility afforded under the law's transferability provision broadens the pool of potential buyers."

New Trouble Ahead for SPACs: The Stock Buyback Tax - Chandra Wallace, Tax Notes ($). If a Special Purpose Acquisition Company fails to find a suitable acquisition, the investors money is returned - their shares are repurchased.

"No profits are being made when SPACs simply give back their shareholders’ money, so applying the buyback tax to that transaction 'flies in the face of the policy' underlying the tax, said Douglas S. Ellenoff of Ellenoff Grossman & Schole LLP."

Municipal Bonds Suddenly Look Cheap. Some Are Tax Traps. - Jason Zweig, Wall Street Journal. "The quirk arises because the income on munis is typically tax-free, while gains in value are taxable, just as with other securities. This applies to people who trade muni bonds with the aim of buying low and selling high."

Minnesota, Michigan Tax Agencies Address Cryptocurrency - Emily Hollingsworth, Tax Notes. "Minnesota’s Department of Revenue has issued an updated fact sheet that includes information about NFTs in relation to sales and use tax treatment of digital products. The fact sheet, released August 23, says NFTs are subject to sales and use tax if the underlying good or service is taxable in the state."

The eligibility criteria for the Kansas credit are less comprehensive. The credit covers any recreational, entertainment, or educational activity that allows the general public to view or enjoy rural activities, including:

Where Do People Pay the Most in Property Taxes? - Janelle Fritts, Tax Policy Blog. "Property taxes accounted for 72.2 percent of local tax collections in fiscal year 2020." 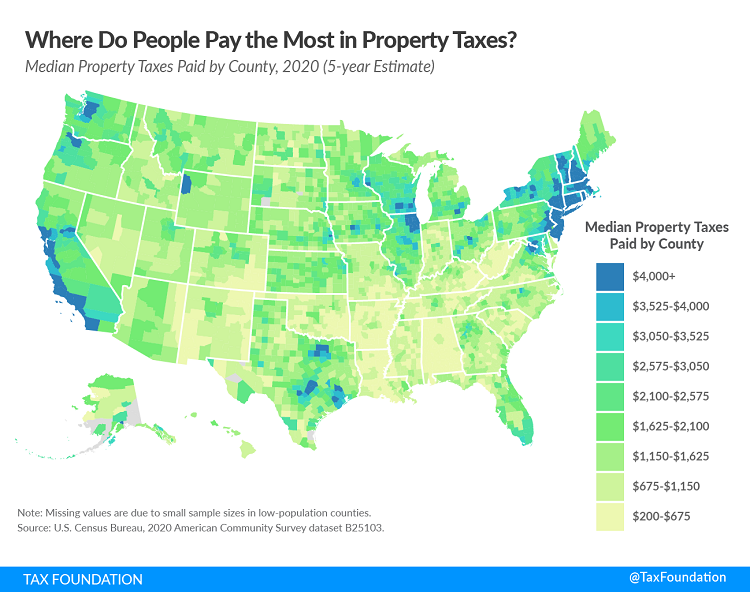 Have a side hustle? Estimated tax payment on that money due by Sept. 15. - Kay Bell, Don't Mess With Taxes. "When you have a gig job, you have to take care of these tax payments on your own by directly sending the appropriate amounts to the Internal Revenue Service as estimated tax amounts."

No Reasonable Cause Demonstrated for Failure to Pay Taxes and Timely File Tax Returns - Ed Zollars, Current Federal Tax Developments. "As was noted earlier, merely having had various unfortunate circumstances take place is not enough to obtain relief unless it can be established that those circumstances are the cause of the failures in question and that the cause was not willful neglect—burdens that are placed on the taxpayer under the law.  Remember, the law requires the taxpayers show that these are the facts in their case."

Taxpayers seeking to claim the new electric vehicle tax credit will find it harder to qualify - National Association of Tax Professionals. "Only battery powered cars manufactured in North America with a manufacturer’s suggested retail price (MSRP) below $55,000 are eligible for the credit. Vans, SUVs and trucks that have an MSRP of up to $80,000 are also eligible."

US Supreme Court to Settle Long-Disputed FBAR Penalty Issue - Matthew Lee, Bloomberg. "The Supreme Court’s decision to hear Bittner to settle the conflict that has arisen from the conflicting interpretations of the meaning of “violation” in the FBAR penalty statute is important for several reasons. First, the conflicting holdings by the appeals courts in Bittner and Boyd mean that taxpayers are subject to disparate penalty treatment depending on where they reside. Taxpayers who live in the states comprising the Ninth Circuit will face significantly lower FBAR penalties than taxpayers residing in the states comprising the Fifth Circuit."

Appeal Of $90 Tax Court Decision Shows Passion Of Pro Bono Attorney - Peter Reilly, Forbes. "An appeal of a Tax Court decision by a taxpayer who was found by the Tax Court to owe $90.86 should have an interesting story behind it. After all the fee to file the appeal is $500. And the story behind Grajales v. Commissioner of Internal Revenue is pretty good as we can learn about how the system works and fails to work for ordinary taxpayers who get caught up in it."

Plaintiffs In Sexual Harassment Cases Are Taxed, Defendants Are Not - Robert Wood, Forbes. "If you make claims for emotional distress, your damages are taxable. If you claim the defendant caused you physical injuries or caused you to become physically sick, damages may be tax free. But most sexual harassment plaintiffs will have a hard time doing that."

In The Context Of The Federal Budget, The Inflation Reduction Act Wasn’t Very Big - Eugene Steuerle and Nikhita Airi, TaxVox. "It’s always tempting to exaggerate the importance of the latest big fight in Congress. The Inflation Reduction Act of 2022 (IRA) made some major policy changes. But big or revolutionary in sheer dollars? No. Most of the major provisions of the new law will move around just a fraction of one percent of total economic output."

Tax-Preparing Cosmetologist Fails to Blow Out IRS Assessments - Mary Katherine Browne, Tax Notes ($). "The Tax Court found that the IRS was correct in determining that a licensed cosmetologist and tax return preparer deliberately failed to report the income from her three businesses by almost $1 million dollars and assessing a $100,000 civil fraud penalty against her."

In the opinion, Judge Wells sets the stage:

Petitioner is a licensed cosmetologist and an experienced tax return preparer. During the year in issue she solely owned and operated a tax preparation company (TaxTime Services or TaxTime) and a hair salon (Xplosions Hair Design) and co-owned a restaurant with her husband. Petitioner and her husband maintained bank accounts at SunTrust Bank to manage cashflow from each of these businesses. TaxTime was recognized as one of the largest tax return preparation companies in Columbus, GA, had continuous operations from 2009 until 2014, and employed approximately 18 persons on average.

Before running her own businesses, petitioner worked as a tax return preparer for Expert Tax Services from 2007 to 2009. She also dedicated time to furthering her tax expertise by attending several courses and seminars in individual tax return preparation. Eventually she accumulated enough knowledge to host her own tax return preparation courses, which she administered from 2011 to 2016.

This makes me curious what the courses covered:

On June 10, 2016, the State of Georgia convicted petitioner of one count of state tax evasion (for failing to report income on her state individual income tax return) and one count of theft by taking (for improperly filing her TaxTime clients' state income tax returns). As part of her sentence, which included 15 years of probation and a $31,300 fine, the State of Georgia permanently barred petitioner from owning or operating any tax preparation company and preparing income tax returns at the state, local, or federal level for other persons.

So maybe she can still teach tax courses?

One might suppose the Tax Court would have less sympathy for a tax teacher than for an ordinary taxpayer. One would be right:

Respondent introduced credible evidence that petitioner failed to maintain, or to submit for examination, complete and adequate records of her income-producing activities for the 2012 taxable year. Petitioner was fully aware of her obligation to maintain such records as she held herself out to the public and qualified as an expert in tax return preparation.

Petitioner appears to argue that her failure to report income was due to negligence, rather than fraud, by testifying that operating many businesses at once caused her to “lack attention to certain areas,” and that neglect was responsible for the “mistake” of underreporting her income. While it may be true that 2012 was a busy year for her, petitioner's tax knowledge, training, and course instruction weigh heavily against her claim that underreporting significant amounts of gross income was a mistake. See, e.g., Becker v. Commissioner, T.C. Memo. 2018-69, at *49. As an experienced, highly trained tax return preparer who held herself out to the public as such, petitioner was or should have been fully aware of her obligation to accurately report income and of the consequences of failing to do so. In general, operating a few businesses is not a reasonable defense to underreporting the income derived therefrom, nor is it a reasonable excuse considering one of those businesses was a tax preparation company.

The court upheld the 75% civil fraud penalty for the preparer/cosmetologist.

The moral? If you run a tax prep business, you ought to pay your own taxes, obviously. It is interesting that someone would be both a cosmetologist and a tax preparer. The professions may seem very different, but they both typically involve making the best of imperfect inputs.

Together again. Today is both International Chocolate Day and National Peanut Day. You know what to do.