The IRS’s destruction of millions of documents related to unprocessed information returns early last year prompted a furious response from the tax community, as well as calls for Congress to investigate the agency’s decision.

Joe Kristan of Eide Bailly LLP shared a similar sentiment: “It’s shocking. . . . For the IRS to just throw all that work away is insulting.” He also described the news as a slap in the face to taxpayers who properly filed their information returns electronically, because their return information can be matched, while taxpayers who may have disregarded their paper information return obligations or underreported income won’t get caught.

The return destruction was revealed in a report of the Treasury Inspector General for Tax Administration released Monday.

We don't normally use memes, but this one by @LoganGrafTax is irresistible: 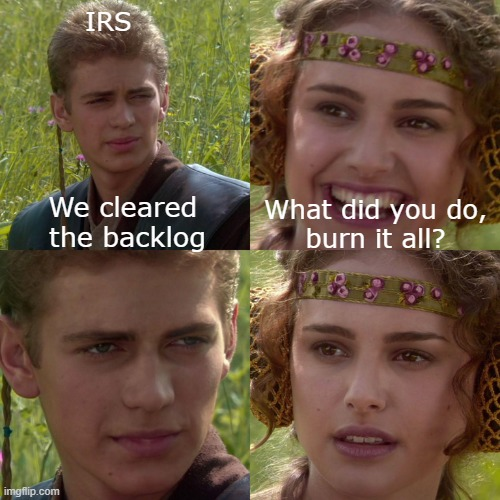 Treasury Secretary Janet Yellen said the leaking of confidential tax information has been detrimental to public trust, and her department is still awaiting results from investigations into the origin of the disclosures.

The investigations are looking into how news organization ProPublica obtained tax documents on some of the highest net worth individuals in the country and revealed how many of them paid a significantly lower tax rate than most Americans.

On the plus side, only non-destroyed return information can be leaked.

Colorado on Track for First Retroactive SALT Cap Workaround - Michael Bologna, Bloomberg ($). "Colorado is on track to become the first state in the country to engineer a workaround to the federal $10,000 cap on deductions for state and local taxes retroactive to 2018 with enabling legislation passing the House on Tuesday."

There are some potential logistical issues. a recent Tax Notes story ($) explains how the bill would work:

The Senate bill would require that passthrough entities seeking to retroactively take advantage of the workaround for tax years 2018 through 2021 make an election on or after December 1, 2022, but before July 1, 2024, on a composite, amended tax return. The returns must not contain any changes unrelated to the election, according to the bill.

The rate for the entity-level tax will remain at 4.55 percent for tax years beginning on or after January 1, 2020. For tax years 2018 and 2019, the rate would be 4.63 percent (the corporate income tax rate for those two tax years). The bill specifies that the tax should be disregarded for purposes of calculating the state's credit for taxes paid to other states.

The advantage would be a reduction in taxable income via a deduction for taxes paid at the entity level. But for what year?

Under normal tax law principles, a deduction cannot be taken until both the "all events" test and the "economic performance" test are met. That would most likely occur no sooner than 2022, when the legislation is enacted and the required Colorado returns are filed and payments made. It appears that taxpayers would be amending prior year Colorado returns to obtain lower federal partnership taxable income in 2022.

This is perhaps the most aggressive use so far by a state of IRS Notice 2020-75, which authorizes the entity-level tax workaround. Whether the IRS will consider this to be an overreach remains to be seen.

New York Bill Extends Entity Tax Election Deadline for S Corps - Benjamin Valdez, Tax Notes. "Under S. 8948, signed into law May 6, S corporations will have until September 15 to elect to pay the entity-level tax for tax year 2022, for which owners can claim a refundable tax credit for their portion of the tax paid, allowing them to avoid the $10,000 SALT cap created under the Tax Cuts and Jobs Act. Under the workaround approved as part of the state’s fiscal 2022 budget, the deadline was March 15."

The Senate’s top taxwriter plans to push for tax provisions, including an advanced manufacturing credit and full research and development expensing, when House and Senate conferees meet to iron out differences in their versions of a broad manufacturing bill.

Under a provision of the 2017 Tax Cuts and Jobs Act that takes effect in 2022, research expenses must be amortized over five years. Before 2022, they could be deducted immediately.

Link: Programs Susceptible to Improper Payments Are Not Adequately Assessed and Reported

You Received an IRS LT11 Notice (or Letter 1058), Now What? - Zachary Montgomery, Freeman Law. "The LT11 and Letter 1058 are alternative forms of IRS final levy notices. Generally, a taxpayer receives the LT11 or Letter 1058 from the IRS after receiving a series of prior notices—CP503, CP504, CP504B, etc. These notices are generally what stand between the IRS and seizing a taxpayer’s assets."

May 14 is final IRS TAC walk-in Saturday - Kay Bell, Don't Mess With Taxes. "With Tax Day over, most U.S. taxpayers are done with their annual Internal Revenue Service. Some, however, are dealing with non-filing issues. For those who need help resolving those tax matters, the IRS is opening some Taxpayer Assistance Center (TAC) doors across the United States for one more Saturday. This coming one. May 14."

Taxpayers Loses Refund Due To Filing Return Before CARES Act Effective Date - Ed Zollars, Current Federal Tax Developments. "The U.S. Court of Federal Claims rejected a taxpayer’s argument that the IRS improperly allowed the offset of a tax refund on his 2019 return filed in January 2020 against his outstanding student loan debt in violation of the CARES Act.  As the opinion pointed out... since the offset took place over a month before the CARES Act was signed into law, there was no relief available that would enable him to recover his refund."

What happens when a taxpayer transfers assets to avoid the IRS? - National Association of Tax Professionals Blog. "A fraudulent conveyance is when a person claims to have transferred property to another party without receiving adequate payment. If a transfer is found to have been fraudulent, the IRS is allowed to set it aside."

Tax Court Caselaw Update - Roger McEowen, Agricultural Law and Taxation Blog. "Lesson: You are an employee if you direct the business of the corporation and the corporation’s sole income comes from the services you provide. "

The Future of Tax Policy for Remote Workers - David Stewart and Paul Jones, Tax Notes Opinions. "The convenience of the employer rule basically says that, 'If you're working from home for your own convenience and not out of any employer necessity, the state's going to treat that day as a day worked in New York.' So, New York cases started to come out and New York was taking a very broad interpretation of what was a convenience day. Then they extended this, in some other cases, beyond just local telecommuters to people who were working remotely from across the country."

Rethinking the Incidence of the Corporate Income Tax - William Gale, TaxVox. "A study by Eric Ohrn of Grinnell College shows that the five highest-paid executives at the studied firms reaped between 17 and 25 percent of some recent corporate income tax cuts – including changes in depreciation rules and subsidies for domestic production."

Recent FBAR Case: IRS Seeks “Willful” Penalty $8.8M Without Much Regard for the Facts - Virginia La Torre Jeker, Virginia - US Tax Talk. "IRS is still waging war on unreported offshore accounts and assets. The Schik case involved very early days in the FBAR enforcement crusade (the year was 2007).  Given this, one might expect a certain degree of leniency from the IRS.   The IRS view was that Mr. Schik was 'willful' despite a fairly unique set of facts. It is unlikely that today, the government will seek anything less than “willful” FBAR penalties for violations if it is given any ammunition to do so."

Related: Facing penalties? See if they can be reduced or removed before you pay.=

RV Salesman Sentenced to Prison for Tax Evasion - U.S. Department of Justice (defendant name omitted). "According to court documents and statements made in court, Defendant, formerly of Alma, instructed his employer not to withhold income taxes from his paycheck and then did not file tax returns with the IRS from 2014 through 2016. During those years, Defendant earned more than $378,000 selling recreational vehicles and automobiles. When questioned by IRS investigators, Defendant falsely claimed to have been shot down and wounded on a Navy mission, causing him to suffer from post-traumatic stress disorder. He also falsely stated that a CPA had prepared tax returns on his behalf."

Let them sleep, then. It's National Third Shift Workers Day!