The House passed its retirement package March 29 on a 414-5 vote. The Securing a Strong Retirement Act of 2022 (H.R. 2954) — sometimes referred to as Retirement 2.0 or SECURE 2.0 — has roughly four dozen provisions, including many that are also in the Retirement Security and Savings Act of 2021 (S. 1770). That Senate bill has been developed in the Finance Committee over the last three Congresses by Finance Committee members Benjamin L. Cardin, D-Md., and Rob Portman, R-Ohio.

There appears to be wide agreement on many of the provisions, including one to allow an employee’s payment on a student loan to count toward an employer match on a 401(k), 403(b), 457(b), or SIMPLE IRA plan. Another provision with wide bipartisan support would boost the required minimum distribution age from 72 to 75.

In a short order released Thursday, Chief Justice Robert Brutinel said Proposition 307 couldn't be placed on the Nov. 8 ballot because the law it targeted, S.B. 1828, qualified for a "support and maintenance" exception in the Arizona Constitution that protects certain laws from being referred to the voters. The Maricopa County Superior Court had found that the law didn't fall within the exception's criteria because it didn't "appropriate state funds or generate necessary revenue," according to the state high court's order. The justices will release a full opinion at a later date.

Pot taxes surpass those from alcohol in legalization states - Reid Wilson, The Hill. "The report, from the Institute on Taxation and Economic Policy, found the 11 states where marijuana is legal pulled in just shy of $3 billion in excise taxes on pot in 2021, compared with about $2.5 billion they made on alcohol excise taxes or liquor store profits."

According to court documents, from Summer 2014 through approximately Spring 2018, Defendants... operated a scheme to defraud the United States government of more than $17 million through the filing of false and fraudulent tax returns in the names of hundreds of identity theft victims. The conspirators used sophisticated cyber means to obtain the personal data used to file the tax returns. Conspirators—including individuals located in Nigeria and Vietnam—then prepared and filed the returns quickly and in large batches. The tax returns were filed from real CPA firms across the United States, all of whom had been hacked.

There's a lot of disturbing stuff here. The operation continued for almost four years. Thieves seem to have had no difficulty finding CPA firms with vulnerable IT systems, and the firms apparently didn't realize that third parties were submitting ID-theft returns through them. It is a sobering reminder of the importance of information security - both for taxpayers and for firms. 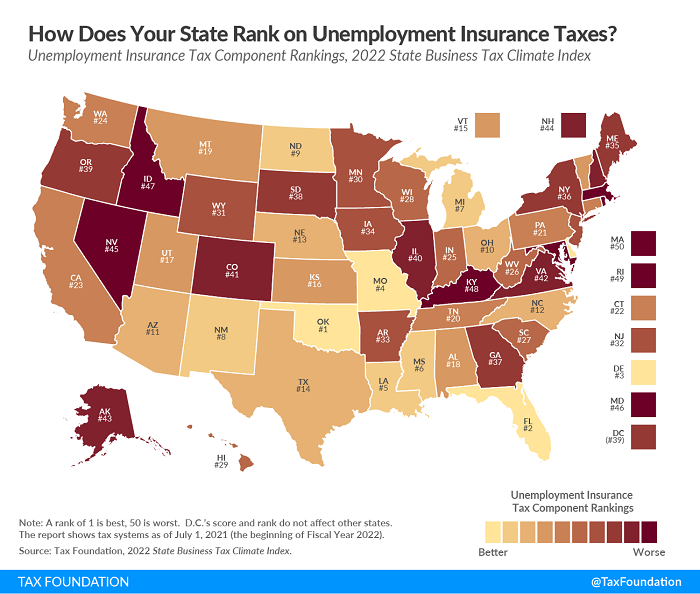 In states with Eide Bailly offices, Oklahoma has the highest ranking - in fact, number 1 overall.

5 post-filing tax tasks to take care of now - Kay Bell, Don't Mess With Taxes. "Adjusting your withholding is easy. Start by using the IRS' online Tax Withholding Estimator. It will help you make sure you're withholding the appropriate amount to avoid either owing or getting a huge refund at tax filing time. Then using the revised withholding amount, complete a new Form W-4 and give it to your payroll administrator. The results will soon show up in your future paychecks."

2022 Tax Season: The Tax Season From Hell (Part 1) - Russ Fox, Taxable Talk. "Government regulations cause the tax professional community to shrink. There’s an excellent quote: 'Whatever you tax you get less of.' Regulations have the same impact. My professional society, the National Association of Enrolled Agents (NAEA), strongly believes that the IRS should regulate all tax professionals because it would weed out bad preparers. I disagree. If someone wants to be a bad professional, it’s easy and no amount of regulation will stop it. It’s 'whack-a-mole.' But regulations also make it harder for me to operate, with costs passed on to you (the taxpayer)."

Volunteer Tax Prep Is A Crash Course in Pandemic Tax Policy - Richard Auxier, TaxVox. "But leaving policy aside for a minute, our client’s federal tax liability was the result of his failure to withhold taxes owed. We often see a similar problem with clients who get nonemployee compensation for house cleaning and construction jobs. These workers (who sometimes are mislabeled employees) don’t have tax withheld from their paychecks throughout the year and can end up owing thousands of dollars (that they don’t have) in income and payroll tax when they file. Unfortunately, the ins-and-outs of tax withholding are rarely discussed with them, especially if they speak English as a second language, until they’re staring at a massive tax bill."

Payroll Taxes Funded the Most Scandalous Frauds in 2020 and 2021 - Carrie Brandon Elliot, Tax Notes Opinions. "For two years in a row, the Association of Certified Fraud Examiners has placed theft of pandemic-related enhanced unemployment benefits at the top of its annual list of five most scandalous frauds."

Taxpayers Fall Far Short of Qualifying as Real Estate Professionals - Ed Zollars, Current Federal Tax Developments. "Rental activities are generally treated as passive activities under IRC §469, limiting the ability of taxpayers to offset losses from such activities against other income. However, a special rule applies to individuals who can meet the qualifications to be a real estate professional under IRC §469(c)(7)."

Corporate Officer Can't Avoid Employee Classification for Employment Tax Purposes - Parker Tax Pro Library. "The Tax Court held that a corporation, which was organized by an individual as a vehicle to offer online courses on real estate development, was liable for employment taxes on the remuneration paid to that individual because, as an officer of the corporation, the individual qualified as an employee under Code Sec. 3121(d)(1). The court rejected the corporation's assertion that the individual performed services in dual capacities as both an officer-employee and an independent contractor and found that the minor services exception of Reg. Sec. 31.3121-1(b) did not apply."

You Received an IRS CP504 Notice, Now What? - Gregory Mitchell, Freeman Law. "The IRS sends a CP504 Notice when a taxpayer has failed to pay a balance owed.  The CP504 Notice is a Notice of Intent to Levy issued pursuant to Section 6331(d) of the Internal Revenue Code."

2022 1st Quarter Published Expatriates - International Tax Blog. "The number of published expatriates for the quarter was 568... The 8-quarter moving average has how now dipped significantly below 1,000 names per quarter"

Prop regs fix a PTC issue 7 years later - Annette Nellen, 21st Century Taxation. "A 4/5/22 Tweet from the Treasury Dept indicates that this change should enable about 1 million people to save hundreds of dollars per month on their coverage."

Sending 1099s doesn't help Ponzi Scheme Operator. A US District Court in Indiana was asked to reconsider whether its sentincing of a convicted Ponzi scheme operator. The sentence took into account "sophisticated means" used to convince investors that they were really earning money, rather than having it stolen by the operator. One of the sophisticated means was the issuance of 1099s for (imaginary) investment earnings credited to the investors.

The defendant had an interesting argument. From the district court opinion: (defendant name omitted):

Defendant insists that producing 1099 tax forms and filing tax returns on what was imaginary interest income for some of the clients didn’t reflect sophisticated means designed to cover up his crimes. He relies on 26 C.F.R. § 1.451-2(a) which explains that "[i]ncome although not actually reduced to a taxpayer’s possession is constructively received by him in the taxable year during which it is credited to his account, set apart for him, or otherwise made available so that he may draw upon it at any time, or so that he could have drawn upon it during the taxable year if notice of intention to withdraw had been given." Defendant argues that he was obligated by law to report to the Internal Revenue Service his clients’ purported interest earnings on their investments as income, which, according to him, proves that he was not using sophisticated means to carry out or conceal his crimes.

The court was unimpressed:

Defendant misunderstands the reasons for the Court’s finding that he utilized sophisticated means. While it is true, as Defendant points out, that some of the investors chose and received monthly interest payments, many others elected to roll over their interest amounts. As to this latter group, his creation of 1099 tax forms and his filing of tax returns on the purportedly accrued interest, whether legally required or not, was a fiction — fraud, to be exact. The reported interest did not exist, that is, it was not "made available so that [the investors] may draw upon it at any time." 26 C.F.R. § 1.451-2(a). Rather, Defendant had stolen the investors’ money, which resulted in the money being unavailable for withdrawal. In fact, as Ponzi schemes do, his scheme also came to a crashing end because the new money dried up and could not be withdrawn by older investors. Therefore, the creation of 1099 forms and resulting tax returns perpetuated the lie that the investments were safe... and were earning interest.

The moral? First, the obvious - beware "safe" investments paying mysteriously-high returns. And if you choose to steal investor money, issuing 1099s won't score you any points when the chickens come home to roost.