What Will The Mid-Term Election Mean For Tax Policy? - Howard Gleckman, TaxVox:

With Democrats retaining narrow control of the Senate and Republicans on the cusp of winning the barest of majorities in the House, it will be difficult if not impossible for Congress to enact major tax bills in 2023.

The Child Tax Credit. The #1 priority for progressives is to restore several elements of the expanded CTC  Congress enacted temporarily in 2021. Some Democrats may try to squeeze some changes into December’s must-pass budget bill. But it is a long shot. Sen. Mitt Romney (R-UT) proposed his own benefit package for families with children. But it has generated almost no GOP support. If Democrats can’t act in the lame duck, it is hard to see the issue going anywhere in 2023.

The best bet: Expect nasty partisan wrangling over the debt limit and a possible government shutdown as well as deep ideological divisions among the Republicans. The result will be little or no major tax legislation in 2023. But some narrow bills could pass, as both parties start to jockey over their tax agendas for the 2024 campaign.

GOP Seems Willing to Make Deal to Extend Child Tax Credit - Rebekah Barton, Tax Buzz. "It is worth noting that there has also been Republican support for some type of extension. In July, Senator Mitt Romney (R-UT) was joined by two other Senators in introducing the Family Security Act 2.0. "

With control of Congress split between the parties, efforts to renew or repeal the TCJA tax provisions might not fare well for either party.

Earl Pomeroy, senior counsel at Alston & Bird LLP, predicted that lawmakers could punt decisions on the 2017 tax cuts for another two years until the next presidential election, just as they did with thetax cuts enacted under former President George W. Bush that expired in 2010. That decision led to the fiscal-cliff agreement  between Congress and former President Barack Obama in 2013.

A November 7 list of investigation topics from Ways and Means Republicans includes spending from the $1.9 trillion American Rescue Plan Act of 2021; “all documents” related to the expanded child tax credit; the IRS sending out 9 million letters about potential benefits the month before the election; the IRS’s March 2021 destruction of 30 million documents; the June 2021 news of a leak of taxpayer information to ProPublica; data on states’ decisions to make nursing homes admit COVID-19-infected residents; the administration’s “family glitch” fix related to the Affordable Care Act; the administration’s support of waiving patent protections of COVID-19 vaccines to spur availability in other countries; documents related to OECD negotiations; the IRS’s tax return backlog; and the administration’s proposals to require more information reporting from banks.

California stares down $25B deficit after years of record cash - Blake Jones and Lara Korte, Politico. "California not long ago was reveling in a record budget surplus. Now the Legislature’s fiscal analysts are projecting a $25 billion deficit next fiscal year as tax revenues decline."

“It’s definitely a different flavor,” said fellow member and enrolled agent Phyllis Jo Kubey. “There’s tremendous optimism and excitement about finally having the means to do some of these things.”

Improving functionality of online accounts is a key recommendation of the group.

A federal grand jury in Charlotte, North Carolina returned an indictment today charging two tax attorneys and an insurance agent with conspiring to defraud the United States and helping clients file false tax returns based on their promotion and operation of a fraudulent tax shelter.

According to the indictment, from 2011 to the present Defendant attorneys... residents of St. Louis, Missouri, and Defendant insurance agent, a licensed insurance agent and broker based out of Jefferson, North Carolina, conspired to defraud the United States by promoting, marketing, and selling to clients a fraudulent tax scheme known as the Gain Elimination Plan (“GEP”).

Federal undercover agents posing as owners of a Texas nail salon helped catch the trio in 2019. The sting culminated in [Defendant attorneys] unknowingly preparing amended returns for the agents for 2015, 2016 and 2017, exposing the scheme's methods by claiming more than $100,000 in fraudulent refunds, according to the indictment.

The realization on those returns had to be pretty terrible on a per-hour basis.

The so-called gain elimination plan involved the two lawyers setting up a limited partnership for a client strictly for the purpose of avoiding taxes and then having the client transfer near total ownership interest of the partnership to a specific charitable organization, prosecutors said. The charity was unnamed in the indictment.

After setting up the partnership, lawyers helped the clients file fraudulent returns deducting as expenses fictitious royalties and management fees that were in theory tax-exempt because the companies were owned by the nonprofit charity, according to the indictment. But the charity did not actually receive the money and the clients went about their existing businesses as usual, prosecutors said.

While this is terrible news for the defendants, their clients surely face audits, back taxes, interest, and penalties. If a tax plan sounds too good to be true, chances are it isn't true.

The U.K. government announced the largest tax increases and spending cuts in a decade on Thursday, becoming the first major Western economy to start sharply limiting its spending growth after years of ramped-up fiscal stimulus during the pandemic and recent energy subsidies.

Chancellor Jeremy Hunt announced £55 billion, equivalent to around $66 billion, of spending cuts and tax increases over the next five years, an attempt to begin lowering the size of government debt relative to the economy from the fiscal year ending March 2028. Among the measures, Mr. Hunt said he would raise taxes by freezing the thresholds at which people pay higher rates, pulling thousands of people into the top band of tax as their pay is boosted by wage rises and inflation. The government will also reduce an energy subsidy to households next spring. It is also increasing a windfall tax on energy company profits. 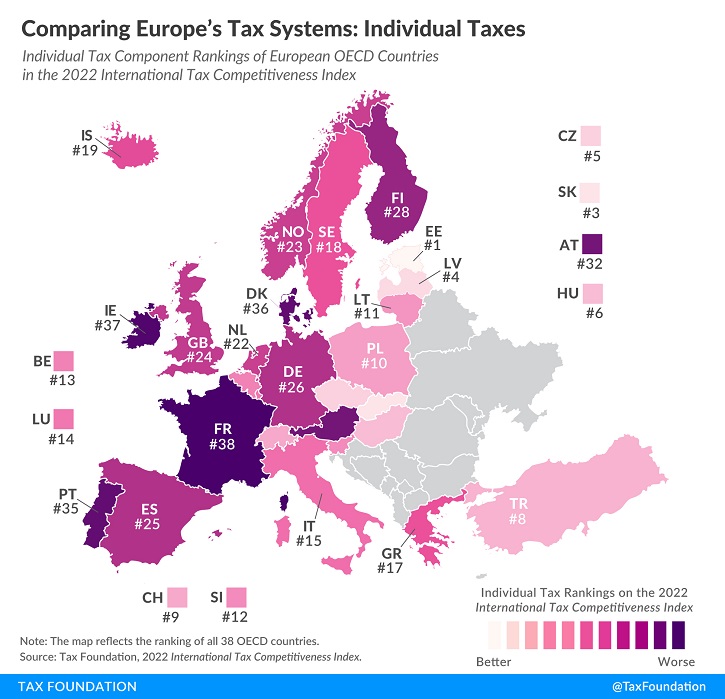 Money, modernization and messaging are IRSAC report focus - Kay Bell, Don't Mess With Taxes. "In addition to the perennial money considerations, this latest report also offered recommendations on IRS modernization efforts, improvements to the taxpayer experience while fulfilling tax enforcement efforts, transitioning taxpayers to a more digital experience, and expanded communication between the IRS and its diverse taxpaying clientele."

This is What It’ll Take for the Next IRS Commissioner to Succeed - Fred Goldberg and Charles Rossotti, Bloomberg (both former IRS Commissioners): "The bedrock principle of American tax administration is rigorous non-political adherence to law. Any actual or perceived deviation from this principle is destructive to the foundation of the tax system and it is uniquely the responsibility of the commissioner to see that this principle is adhered to and believed in by the public."

What you need to know about the expanded Residential Clean Energy Credit from the Inflation Reduction Act - Thomson Reuters Tax & Accounting. "If you’ve had clients tell you that they’ve spent $5,000 on new energy efficient windows for their home and, year after year, you’ve patiently explained to them that the most they can get is a $500 lifetime credit, you’re now in luck."

Seven Reasons To Get A Tax Opinion Before You File With IRS - Robert Wood, Forbes. "4. It is Too Late to Get an Opinion if You’re Audited."

According to court documents and statements made in court, Defendant, 62, of Sioux City, owned K&L Construction, Inc., a landscaping and construction company. As the sole shareholder and president of K&L Construction, Defendant was responsible for filing quarterly employment tax returns and collecting and paying over to the IRS payroll taxes withheld from employees’ wages. From the second quarter of 2014 through the first quarter of 2017, K&L Construction paid approximately $3.8 million in wages to its employees and withheld approximately $1 million in payroll taxes, but the company did not pay over any of these withholdings to the IRS.

During IRS collection proceedings, Defendant accepted responsibility for paying K&L Construction’s outstanding tax balance. Defendant, however, submitted a false form to the IRS that concealed some of his assets. As part of his plea agreement, Defendant admitted that he submitted the false form for the purpose of concealing assets and evading payment of K&L Construction’s outstanding payroll tax liability.

Two big mistakes. The first was not paying over withheld taxes. The IRS hates that, and often that alone is enough to start a criminal case. Not being honest in reporting assets for collection made it a lot worse.

A loaf of bread, a jug of wine, and a hike. Today is the happy conjunction of National Homemade Bread Day, Zinfandel Day, and National Hiking Day. Calories should about even out.