The White House said no deadline has been set for bipartisan talks on a compromise infrastructure package, but House Democrats said they are ready to move ahead without Republicans if a deal can’t be struck by the end of next week.

After a meeting of House Democrats with administration officials including White House counselor Steve Ricchetti Tuesday, House Budget Chair John Yarmuth said the administration was “giving it a week or 10 days and then we move along with reconciliation,” referring to fast-track legislation that doesn’t need GOP support to pass.

“I don’t see a prospective change in rules pertaining to the taxation of future realization with capital gains as being retroactive,” she told the Senate Finance Committee during a hearing on Biden’s budget request.

The Biden Administration last month introduced a $6 trillion budget request that included a call for taxing long-term capital gains and qualified dividends at ordinary income tax rates for taxpayers with adjusted gross income of more than $1 million. “This proposal would be effective for gains required to be recognized after the date of announcement,” according to the Green Book. The proposal was announced on April 28, 2021.

The "Green Book" explanation of the Biden capital gain tax increase said that it would be retroactive; Administration sources talked about an April 28 effective date.

Also: "The President’s budget is also not a bill and Congress is not bound to include any of its provisions in legislation."

Ms. Yellen also said the government would take any necessary actions to protect taxpayer data following the release of information about wealthy Americans in an apparent leak to ProPublica.

“We’re only one week out on this and I really want to emphasize: We do not know what happened,” Ms. Yellen said. “We don’t have any facts at this point.”

That they don't even know whether it was a leak or a hack yet is not reassuring.

Yellen: Disclosure of tax data to ProPublica a 'very serious situation' - Naomi Jagoda, The Hill. "ProPublica last week published an article detailing the taxes of prominent U.S. billionaires, indicating that many paid little or no taxes. The report was based on confidential data obtained from an anonymous source."

Yellen Defends Tax Hikes, Discounts Inflation Fears - Doug Sword, Tax Notes ($). "Yellen reiterated the administration’s desire to make the expansion of the child tax credit permanent and told lawmakers that their directive in the American Rescue Plan Act of 2021 (P.L. 117-2) to make the annual credit available in monthly payments would be implemented in July. The credit was made fully refundable and expanded temporarily to $3,000 per child and $3,600 for children younger than 6."

But McLeish emphasized that the practical compliance challenges posed by Biden’s proposals could be dramatic. He recalled that one TEI member at a midsize U.S. company with only a single tier of controlled foreign corporations described how her company ultimately had to forgo claiming the foreign tax credit under the global intangible low-taxed income regime in 2018 and 2019 because there simply wasn’t enough staffing and software resources to finish the computation.

With Biden proposing to apply those calculations on a country-by-country basis, “you’re looking at an exponential increase in the number of forms that would need to be filed, and quite frankly, you’re looking at hiring more staff,” McLeish said.

A Global Minimum Tax and Cross-Border Investment: Risks & Solutions - Daniel Bunn, Tax Policy Blog. "These higher tax revenues would, however, come at a price of lower global investment. Businesses that currently utilize low-tax jurisdictions to facilitate cross-border investment would see a significant tax hike on their current projects and face a new tax deterrent on future projects—an effect ignored by many policymakers."

With the elimination of the deduction for federal taxes, many high-income Iowans are likely to see their state income tax bills rise.

Colorado Gov. Jared Polis (D) has signed a bill extending a tax break for qualified retailers that allows them to retain state sales tax to offset revenue losses caused by the COVID-19 pandemic.

Under H.B. 1265, signed into law June 14, restaurants, bars, and other food and beverage businesses that lost revenue because of the pandemic can deduct up to $70,000 in monthly net taxable sales for June, July, and August.

How Stiff Are Distilled Spirits Taxes in Your State? - Janelle Cammega, Tax Policy Blog. "This round of information is on us, so help yourself to the following map to see whether you’re shaken or stirred by how your state’s distilled spirits taxes compare with the rest of the nation." 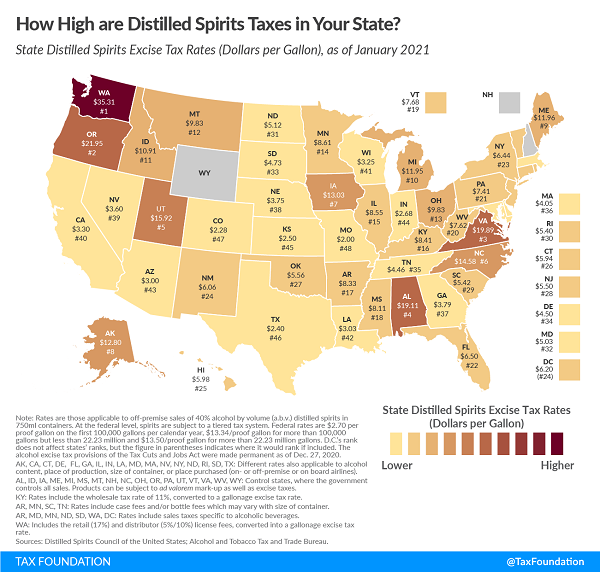 Due to Backlog of Unprocessed Returns, IRS Makes Temporary Changes in Offer in Compromise Procedures- Ed Zollars, Current Federal Tax Developments. "The IRS was facing a massive backlog of returns as of May 1, 2021 per information provided by Erin Collins, the National Taxpayer Advocate in a Senate Hearing. This backlog of over 30 million unprocessed returns is creating problems for processing offers in compromise, as the officer attempting to process an offer may be unable to access the filings for the last two years—and not know if that is because the taxpayer has not filed those forms or they are just stuck somewhere in the backlog."

Related: Related: What is the IRS Fresh Start Program?

"For too long, the wealthiest Americans and big corporations have been able to use lawyers, accountants, and lobbyists to avoid paying their fair share — and budget cuts have hollowed out the IRS so it doesn't have the resources to go after wealthy tax cheats. The IRS should have more — and more stable — resources to do its job, and my bill would do just that," said [Senator Elizabeth] Warren in announcing introduction of The Restoring the IRS Act of 2021.

Those dastardly tax advisors, telling clients how to comply with the tax laws.

Remember Michael Avenatti? He briefly was famous as the attorney for adult film actress Stormy Daniels in her case against Donald Trump. He was even touted as a presidential candidate, until legal troubles intervened. He has been convicted of attempting to extort $25 million from Nike.

In his cameo in the spotlight, Mr. Avenatti also hit the tax headlines. An IRS analyst pleaded guilty to disclosing IRS data to the lawyer - a reminder of the legal issues that will face any IRS employee linked to the leak of information on wealthy taxpayers to Pro Publica.

Mr. Avenatti himself faces an indictment on 19 tax charges:

Some of the tax charges relate to Avenatti’s ownership of Global Baristas US LLC (GBUS), which operated Tully’s Coffee. Starting in late 2015 and continuing into 2017, GBUS failed to file employment tax returns and failed to pay approximately $3.2 million in federal payroll taxes, according to the indictment, which notes that this figure includes at least $2.3 million in “trust fund taxes” that GBUS had withheld from its employees’ paychecks. In 2016, the IRS initiated a collection action against GBUS, and, in June 2017, the IRS filed a federal tax lien against GBUS as part of its attempts to collect nearly $5 million in unpaid federal payroll taxes and penalties.

Court records indicate that the tax case is scheduled for trial next month. The government has the burden of proving the accusations.

Mr. Avenatti's presidential ambitions may be on indefinite hiatus, but is a candidacy ever really over as long as the T-shirt is still available?

Something for everyone. Today is National Eat Your Vegetables Day. If that's a bit stern for you, it's also National Apple Strudel Day and National Cherry Tart Day.