Limited liability partners trying to claim exemptions from self-employment taxes will continue to get scrutiny from the IRS.

Audits involving limited liability companies claiming exemptions from self-employment taxes are ongoing and have been fairly successful, Clifford Warren of the IRS Office of Associate Chief Counsel (Passthroughs and Special Industries) said May 11 at a Practising Law Institute virtual conference.

Self-employment tax regulations written before the advent of limited liability companies have never really been updated to take them into account. The Tax Court set a marker limiting some of the most aggressive taxpayers in it's 2011 Renkenmeyer case (136 T.C. 137), but there is still enough gray area to tempt taxpayers.

Related: Partnerships and the Year 2021.

The Internal Revenue Service, in response to disruptions of the fuel supply chain, will not impose a penalty when dyed diesel fuel is sold for use or used on the highway in the states of Alabama, Delaware, Georgia, Florida, Louisiana, Maryland, Mississippi, North Carolina, Pennsylvania, South Carolina, Tennessee, Virginia, and the District of Columbia.

A federal judge has denied Ohio’s request to block the U.S. Treasury Department from enforcing a provision in the recently adopted federal COVID-19 relief act that prevents states from using the aid it provides to offset reductions in net tax revenue...

In the opinion, Cole determined that the court has jurisdiction and that the state has “established a substantial likelihood (although by no means a certainty) of success on at least an aspect of its Spending Clause claim, and that Ohio is currently suffering irreparable harm.”

But the judge also found that the relief requested “does not prevent the irreparable harm that Ohio asserts as the basis for its request.”

The federal limitation on state tax cuts has made tax work in this spring's legislative sessions an uncertain exercise.

Instead, S.F. 619 and H.F. 893, like S.F. 576, would eliminate the triggers and allow numerous tax changes to take effect automatically beginning Jan. 1, 2023. In addition to the income tax bracket changes, the bills would allow Iowa taxpayers to use federal taxable income — including all deductions and adjustments — as the starting point for calculating state income tax rather than using federal adjusted gross income.

Other important provisions of this bill include:

While agreement with the House on a tax bill is expected, the final bill may be less ambitions. Bonus depreciation may be the least likely provision to survive.

Banks brace for battle over call to track tax dodgers - Kellie Mejdrich and Aaron Lorenxo, Politico. "Bankers say that while they support the goal of cracking down on tax evaders, their participation would raise a variety of potential problems, including threats to privacy and data security, increased compliance costs and damage to customer relationships."

House tax-writers bicker over whether tax code is progressive enough - Jay Heflin, Eide Bailly. "Wealthier taxpayers also paid higher rates on taxes when personal income, payroll, excise and corporate income were combined. The average tax rate for AGIs $1,000,000 and above was 31.50% in 2018, versus an average rate of 9.60% for AGIs between $40,000 and $50,000."

Republicans Reject Tax Increases After Biden Infrastructure Talks - Ken Thomas and Andrew Duehren, Wall Street Journal ($). "The top Republicans on Capitol Hill told President Biden Wednesday they would oppose any effort to raise taxes to pay for an infrastructure proposal, leaving a central issue in the talks unresolved as Republicans and Democrats search for a bipartisan compromise."

Taxing Unrealized Capital Gains at Death Is Unlikely to Raise Revenue Advertised - Garrett Watson, Tax Policy Blog. "The U.S. has not typically seen sustained collections of capital gains and estates taxes above 1 percent of GDP; the longest stretch of time when collections exceeded that level was between 1996 to 2000 during the dot-com boom. It is unlikely this tax change would break that trend, especially given the uncertainty about the long-term prospects of the policy locking gains in place."

IRS enlists TaxBit to help catch crypto cheats - Michael Cohn, Accounting Today. "TaxBit’s tax automation software is already being used by companies, consumers and other government agencies, but the deal with the IRS represents a major step in demonstrating how seriously the IRS is taking tax compliance for users of digital and virtual currencies like Bitcoin, Ether and Dogecoin. TaxBit will soon be working with the IRS, and its reports will be shared not only with the IRS, but with the taxpayers themselves, as well as the CPAs and attorneys who represent them during audits."

Partnership Can't Subtract $160M Goods Sold, Tax Court Says - Theresa Schliep, Law 360 Tax Authority. "Costs of goods sold must be subtracted from gross receipts to calculate gross income, which is taxable, according to the opinion. There generally must be some corresponding receipts from the sale of those goods in order to claim an offset, the Tax Court said, noting that the dispute centered on the timing of the subtractions and not the company's entitlement to them."

Saver's Credit already offers an added nest egg tax break & there's talk of enhancing it - Kay Bell, Don't Mess With Taxes. "This retirement tax break, sometimes referred to as the Retirement Saver's or Retirement Savings Credit for more specificity, is not new; it first appeared on 2002 tax returns. But it is too often overlooked."

Dividend Tax Rates in Europe - Elke Asen, Tax Policy Blog. "Estonia and Latvia are the only European countries covered that do not levy a tax on dividend income. This is due to their cash-flow-based corporate tax system. Instead of levying a dividend tax, Estonia and Latvia impose a corporate income tax of 20 percent when a business distributes its profits to shareholders." 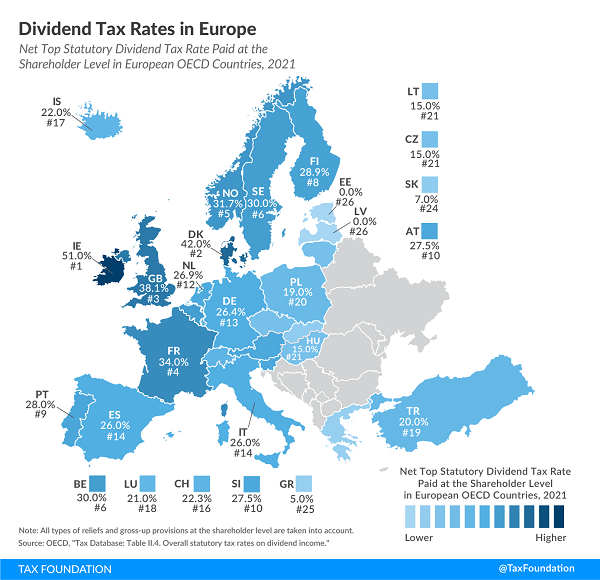 As Bad As Ignorance is for the World, There are Those Who Benefit from It - Jim Maule, Mauled Again. "When asked whether the taxpayer or the taxpayer’s accountant is responsible for filing errors, 42 percent put the onus on the accountant. Wrong."

I wonder: What constitutes a "fair share" in President Biden's eyes? On what basis does he conclude that the current distribution of the tax burden is not fair?

0% Tax Rate? For Some Middle-Class Families, That Could Be the Case This Year - Spencer Wilson, TaxBuzz. "A recently released report from the nonpartisan Joint Committee on Taxation (JCT) has estimated that the $1.9 trillion aid package will have the effect of reducing the average taxpayer’s individual tax rate to almost zero, and families earning less than $75,000 per year may find their tax rate dropping into negative numbers."

Go ahead and jump! Today is National Frog Jumping Day. "One frog named Rosie the Ribeter has held the jumping record at 21 feet, 5 ¾ inches since 1986."