It's Monday, and the big reconciliation bill with all the potential tax changes isn't done. From Punchbowl News:

Democrats are still working on their reconciliation bill and they don’t know when it’s going to be done. They can’t get the process started today in the House as the leadership would’ve liked, so they’ll get back to us when they can start. There’s a huge push to get this done by the end of the week. The odds of that happening right now are improving, but far from certain.

This item from Punchbowl is eye-opening: "Members are going to want time to read the bill, sift through the text, etc. Some lawmakers will want as much as for as long as 72 hours."

Biden Gets A Big G-20 Win, Still Struggling To Close The Deal With Hill Democrats - Renu Zaretsky, Daily Deduction. "Democratic leaders have told lawmakers they want the chamber to vote on both the bipartisan infrastructure bill and a $1.75 trillion social spending bill tomorrow. Committees worked through the weekend to complete changes to the Build Back Better bill. Among the still-unresolved issues: What to do about the cap on the state and local tax (SALT) deduction, whether to create a federal family leave and medical program, and whether to allow Medicare to negotiate drug prices."

Even the scaled-back plan will mean some sharp tax increases for U.S. companies and high-income households. In addition to the 15% corporate minimum tax, the plan would also impose a separate 15% minimum tax on U.S. companies’ foreign income, as part of the U.S. contribution to the international deal negotiated by Treasury Secretary Janet Yellen to boost minimum taxes around the world. The plan would also expand a 3.8% tax on high-income households so that owners of closely held businesses pay it.

The surtaxes on the sliver of households making above $25 million would take the top ordinary-income tax rate to at least 45%, the highest since 1986. And the top capital-gains tax rate would hit 31.8%, the highest in more than 40 years. 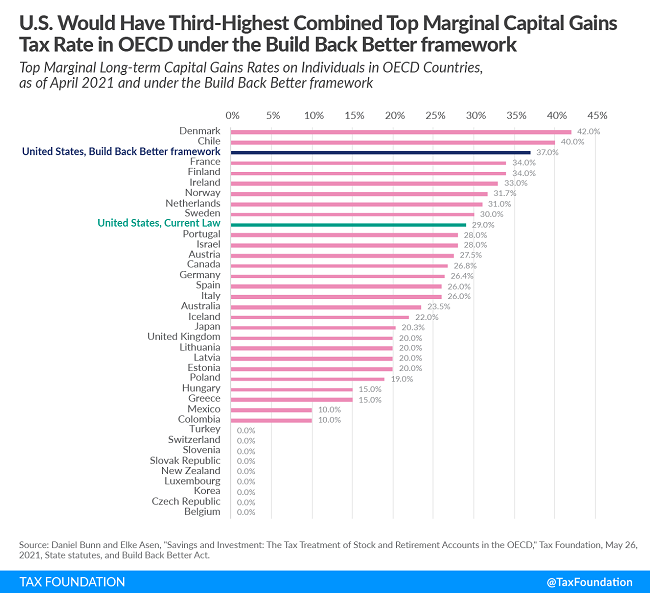 The House Democrats’ earlier plan to change the tax treatment of grantor trusts would’ve imposed gift or estate tax once a grantor trust is terminated, and treated sales between a grantor trust and its owner as taxable transactions. Together, the two provisions would’ve upended many traditional estate tax planning techniques.

Also, the prior version of the House bill would’ve accelerated the expiration of the doubled estate and gift tax exemption from its current expiration beginning in 2026 to the beginning of 2022, but that provision is absent from the bill.

In an October 26 letter to the Senate Finance and House Ways and Means committees, the American Institute of CPAs called attention to the confusion that could be caused by enactment of the retroactive sunset of the ERC present in the Infrastructure Investment and Jobs Act (H.R. 3684). Under that bill, the end date of the ERC would move from December 31, 2021, to September 30, 2021.

“Pending legislation of this nature is very confusing to taxpayers and their advisers,” the AICPA wrote. “Many do not understand that the credit continues to be available, and others are reluctant to take advantage of the credit by reducing current payroll tax deposits, fearing that it may be retroactively repealed and penalties for failure to deposit taxes may apply.”

Related: Resources to Help You with the Employee Retention Credit

Estimated Effects of Proposed 15 Percent Minimum Tax on Individual Companies - Martin Sullivan, Tax Notes ($). "Although they have a lot of political appeal, minimum taxes are poor tax policy. Rather than slowing down by taking your foot off the accelerator (that is, by repealing tax benefits), you slow down by leaving your foot on the gas and stepping on the brake (that is, by maintaining tax benefits and at the same time limiting them with a minimum tax). Two-footed driving causes a lot of wear and tear on a vehicle. Two-footed tax policy causes a lot of wear and tear on the tax system, but it might be the only way Democrats can reach their destination."

De-FANGed, Part 4: The OECD’s Land Grab - Lee Sheppard, Tax Notes ($). "Developing countries that signed on to the OECD’s October 8 statement on the two-pillar solution will regret it, and not merely because they would be required to give up DSTs. This terrible deal, if fully implemented, would constrain their future relationships with the United States, Europe, other signatories, and crucially, their own neighbors."

Calif. Pass-Through Rules Need Clarification, Panel Says - Asha Glover, Law360 Tax Authority ($). "In California, a pass-through entity can't have other partnerships as a partner, which limits the eligibility and makes it more difficult to qualify as a pass-through entity compared to other states, said Caragh De Luca, partner at PwC. The professionals spoke on a panel at a tax conference in Nashville, Tennessee, hosted by the Paul J. Hartman State and Local Tax Forum."

The Tax Rules Involving Prepaid Farm Expenses - Roger McEowen, Agricultural Law and Taxation Blog. "A common year-end tax strategy for farmers is to pre-pay input expenses by the end of the current tax year.  Pre-paying for next year’s seed, feed, fertilizer and chemicals, for a farmer on the cash method of farming, can reduce a current years’ tax burden.  But, if those deductions could be better utilized in the next tax year, pre-paying may not be the best strategy."

6 tax moves to make this November - Kay Bell, Don't Mess With Taxes. "3. Fine tune your Form W-4. By now, you should have a good idea of what your final 2021 earnings will be. If it looks like you might be getting a refund when you file next year, consider adjusting your withholding now. That way, for the final pay periods of 2021, you'll get more of your hard-earned money in your pay rather than some of it being held for months by Uncle Sam."

Top 10 Considerations for Successful Year-End Planning - Jenni Huotari, Eide Bailly. 2019/11 "Not only do you have a massive amount of paperwork in your 1099s and W-2s, you must consider tax planning and compliance and the overall health of your business."

Week In Insights: Avoiding the Nightmare of Tax Uncertainty - Kelly Phillips Erb, Bloomberg. "Despite several proposals, there is no clear requirement to report sales of cryptocurrency on Forms 1099."

Federal Deductibility Is Distorting Tax Liability in Six States - Jared Walczak, Tax Policy Blog. "At the federal level, the state and local tax (SALT) deduction has emerged as a hot-button political issue ever since the deduction was capped at $10,000 under the Tax Cuts and Jobs Act (TCJA) of 2017. The SALT deduction has defenders as well as detractors, but a peculiar inversion of it—a state deduction for federal taxes paid—exists in only six states. Despite the best of intentions, it is bad news for taxpayers. Fortunately, three states are on track to eliminate the policy within the next few years. The other three should join them."

Although this is not specifically a state issue, I must comment on what I think is the worst tax proposal of the year. A group of state attorneys general has asked Congress to pass something called the Local Journalism Sustainability Act of 2021, H.R. 3940. State attorneys general know nothing about tax policy. They should refrain from using their office to opine upon which they know nothing.

Tax credits: is there anything they can't do?

But it is at the state level where the big action is. More states now have film credits than don’t and they are often refundable, making them in effect straight up subsidies.

He fears that producers of lower budget film and TV series on scattered locations haven’t replicated that strong safety infrastructure. It may be that states competing with one another in their tax credit offerings are further dispersing the industry.

To be sure, there are plenty of other reasons film tax credits are questionable policy.

Be careful. It's National Men Make Dinner Day. It's also National Cook For Your Pets Day. What could go wrong?