There has been extensive discussion recently about a potential change in the Affordable Care Act (ACA) and related taxes. This fall, the U.S. Supreme Court is scheduled to consider the case of California v. Texas. One of the possible outcomes of that case is that the entirety of the ACA, including related taxes, could retroactively be found unconstitutional as result of the elimination of the penalty, starting in 2019, for not carrying health insurance...

After careful consideration, we believe that filing a protective claim for 2016 is NOT appropriate in most cases. Most legal scholars believe a decision finding the entirety of the ACA to be unconstitutional is unlikely, particularly with respect to tax years beginning before 2019 when the relevant change to the penalty for not carrying health insurance became effective. This low likelihood of success does not appear to justify the costs and effort that will be required to file the protective claim in the typical case. To our knowledge, most major CPA firms are taking a similar position.

I think this is correct. The Supreme Court ruled that the ACA was constitutional with the tax. While I have no special insight into Justice Roberts' mind, I don't see him concluding that a penalty rate 0% in 2019 makes the ACA unconstitutional back to its enactment. Without that conclusion, it's hard to see refunds for pre-2019 years even if the suit wins - which I think is unlikely in the first place.

AICPA Calls for Blanket Penalty Relief - Kristen Parillo, Tax Notes ($). "Given that nearly all taxpayers affected by the coronavirus qualify for reasonable cause penalty relief, “automatic waiver of penalties for the 2019 tax year, and possibly the 2020 tax year, is appropriate,” the AICPA said in a July 2 letter to Treasury and the IRS."

Not Ready To File Your Tax Return? Here’s How To Get An Extension - Kelly Phillips Erb, Forbes. "It only takes a few minutes, there are no special hoops to jump through, and there's no fee payable to the Internal Revenue Service (IRS). And contrary to popular belief - and what some suggest this time of year - filing for an extension isn't an audit trigger."

The Impact of Applying Early for PPP Loan Forgiveness - Adam Sweet, Eide Bailly. "In recent guidance, the government states that a borrower can apply for forgiveness before the end of their covered period. The guidance further states a borrower using either the 8-week or 24-week covered period can apply early; however, in practice, borrowers using the extra time provided in the 24-week period may be the only ones who apply early."

Seattle City Council Approves New Payroll Tax - Paul Jones, Tax Notes ($). "The tax, which is expected by proponents to generate around $214 million annually, would be levied on businesses with at least $7 million worth of annual payroll in Seattle. Businesses with annual Seattle payroll expenses under $100 million would pay a 0.7 percent tax on the payroll expense of employees whose annual pay equals at least $150,000 but less than $400,000, and 1.7 percent on the payroll expense of those paid $400,000 or more."

Ninth Circuit Rules Oregon Can’t Tax Railroad Intangible Property - Andrea Muse, Tax Notes ($). "The court held July 8 in BNSF Railway Co. v. Department of Revenue that the Oregon Department of Revenue discriminated against the railroad in violation of the 4-R Act by including more than $15 billion in accounting goodwill and other intangible personal property in its valuation of the company's property."

IRS Updates Auto Depreciation Limits for 2020 - Eide Bailly Tax News & Views. Under the tax law, you can be in the lap of luxury for less than $19,000. 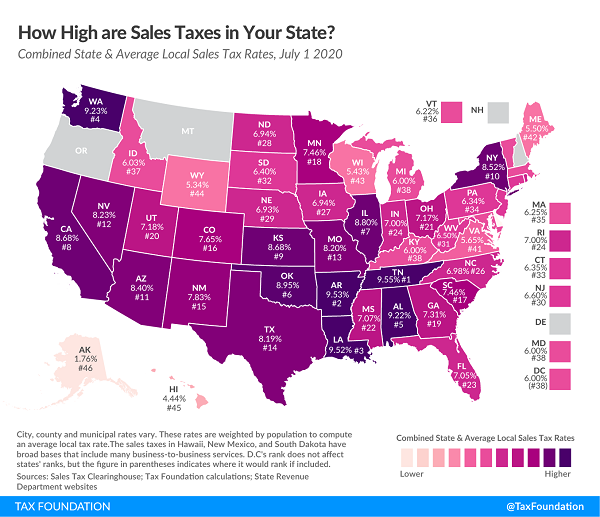 Bozo Tax Tip #5: Who Needs to Pay Employment Taxes?!? - Russ Fox, Taxable Talk. "Business troubles aren’t fun. However, if you don’t pay the IRS your employment taxes you will find your troubles multiplying."

Congress Has No Clear Roadmap For Its Next COVID-19 Response - Howard Gleckman, TaxVox. "Congress and the Trump Administration must address three domains—public health, state and local government aid, and support for businesses and households still reeling from the pandemic."

NTA Blog Post On “Protecting the Rights of Taxpayers Who Rely on FAQs” Is Timely and Welcome, But Doesn’t Go Far Enough - Alice Abreu and Richard Greenstein, Procedurally Taxing. "As NTA Collins pithily observed, 'Why should taxpayers even bother reading and following FAQs if they can’t rely on them and if the IRS can change its position at any time and assess both tax and penalties?' The same question can be asked with respect to publications and instructions to forms."

TIGTA - IRS Scores 98% On First Stimulus Payments - Peter Reilly, Forbes. "By TIGTA’s reckoning about 98% of the payments were correct. That strikes me as really good. Of course the problem when you are dealing with numbers of this magnitude is that even 2% is, as we say, 'a number'."

IRS Sent Duplicate Stimulus Checks to Thousands, TIGTA Finds - Alexis Gravely, Tax Notes ($). "Because the IRS used data from tax years 2018 and 2019 to determine eligibility for the payments, some individuals whose filing status changed between the two years — either from single to married or from married to single — received duplicate checks, according to a new report from the Treasury Inspector General for Tax Administration. The erroneous payments totaled $69 million."

A wedding present for some, a divorce consolation prize for others.