According to the IRS, if you receive your stimulus check as a prepaid debit card, it will arrive in a plain envelope from “Money Network Cardholder Services.” The Visa V name will appear on the front of the card; the back of the card has the name of the issuing bank, MetaBank®, N.A. The information included in the envelope will explain that the card is your Economic Impact Payment Card.

I almost didn't open mine.

Taxpayer Advocate not taking coronavirus payment cases - Kay Bell, Don't Mess With Taxes. "But now, two months after the CARES Act became law on March 27, some EIP-eligible recipients are still waiting for direct deposit or a paper check or a debit card with their pandemic payment." Another reason to make sure you aren't throwing away mail that may have a CARES Act payment card.

The CFAP is not a loan program so it does not need to be repaid. There is a maximum payment limitation of $250,000 per person or entity if all commodities are combined. If approved, ag producers will receive 80% of the initial eligible payment or $200,000 maximum up front. The final 20% will be paid at a later date up to a maximum of $250,000 as long as funds remain available.

For entities with at least 75% of their revenue from farming, ranching or forestry, there is no income limit to qualify.

The PPP statute states that payroll costs incurred and paid during the eight-week period covered by the loan are eligible to be forgiven, but new interim final rules from the Small Business Administration issued May 22 tweaked the language to refer to costs “paid or incurred.”

But some practitioners question how significant this new Paycheck Protection Program wording really is, according to the story.

Employee Retention Credit Qualifications Puzzle Tax Advisers - Frederic Lee, Tax Notes. "Part of the confusion stems from the requirement that an eligible business’s operations be fully or partially suspended under a government order."

In related news, the IRS finally updated its ERTC FAQ to clarify that taxpayers repaying PPP loans by May 18 are eligible for the employee retention credit. The SBA had moved the safe harbor loan repayment date to avoid questions about "good faith" certification of need. The IRS has now updated Q&A 79 to match the May date for allowing PPP loan recipients to qualify for the retention credit.

IRS Extends Safe Harbor for Renewable Energy Projects - Alexis Gravely, Tax Notes ($). "In Notice 2020-41, 2020-25 IRB 1, released May 27, the IRS said that because some companies are facing supply chain delays related to the COVID-19 pandemic, it is adding an extra year to the four-year continuity safe harbor offered in existing guidance on the production tax credit for renewable energy facilities under section 45 and the investment tax credit for energy property under section 48."

Company's Gain From Sale of LLC Interest Not Apportionable to Idaho - Jennifer McLoughlin, Tax Notes ($). "Noell Industries Inc.’s $120 million gain from the sale of its interest in a manufacturer of combat and tactical gear was nonbusiness income under Idaho law, according to the state supreme court."

"Nonbusiness" income is only taxed in its home state, rather than being apportioned to all states in which the taxpayer files.

IRS Taxes Most Loan Forgiveness, Be Careful With Exceptions - Robert W. Wood, Forbes. "Like it or not, when a debt you owe is canceled or discharged, in many cases the tax code treats the wiped out debt as cash income to you. In most cases, if you owe $500,000 to the bank, but the bank forgives it, it's as if the bank just handed you $500,000 and Uncle Sam wants his cut."

Welcome To Tax Court, Now Go Home (Unless a Lawyer Volunteers) - Bob Kamman, Procedurally Taxing. "What is most remarkable about these two cases, aside from the question of what would have happened without last-minute volunteer legal help, is that both involve an IRS notice of deficiency followed by a delayed IRS defense that the Tax Court lacks jurisdiction to review it.  If the notice is the ticket to Tax Court, Chief Counsel is the bouncer who shows up much later to deny petitioner’s entry."

As the taxpayer found in this case, it's good to have professional help when you are up against the IRS. This video helps explain why.

To What Extent Does Your State Rely on Property Taxes? - Janelle Cammenga, Tax Policy Blog. "In fiscal year 2017, the most recent data available, property taxes were such a significant source of local revenue that they accounted for 72.1 percent of local tax collections nationwide and 31.9 percent of total U.S. state and local tax collections, a greater portion than any other source of tax revenue." 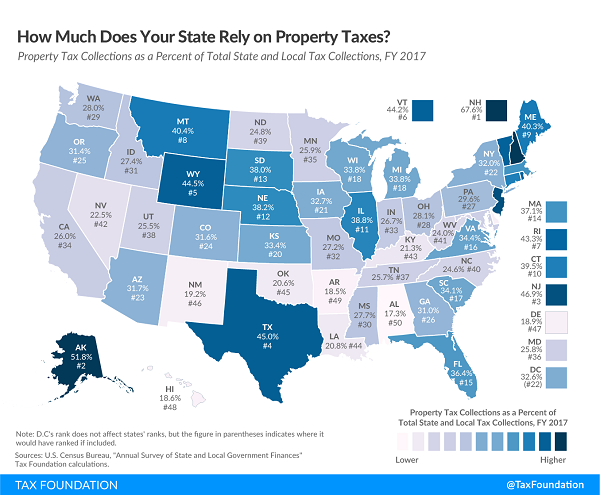 In states with Eide Bailly offices, Texas depends most on property tax revenues (45%), while neighboring Oklahoma is least dependent, deriving 20.6% of its revenues from property levies.

No State is Immune From COVID-19’s Economic And Fiscal Fallout - Richard Auxier, TaxVox. "The 50 states are diverse, but in the COVID-19 pandemic era, they share a key challenge: An economic and fiscal crisis of a size and speed not seen since the Great Depression."

At leasts he had a healthy diet? From a Department of Justice Press Release about a tax evasion sentencing (taxpayer name omitted):

Defendant previously admitted to the court that in 2017 he failed to report $531,408.38 in gross income, which would have resulted in tax due the IRS of approximately $236,945. He admitted that from 2016 through 2108, he failed to report income totaling $1,061,000. According to court documents, Defendant told the government that he spent unreported income at, among other places, Whole Foods and strip clubs, and that he used some of the funds to purchase drugs.

I'm pretty sure I've never seen "Whole Foods" used in the same sentence as strip clubs and illicit drugs, but maybe there are aisles at the store I've missed.