Coronavirus Stimulus Talks Make Progress Despite Resistance - Kristina Peterson, Wall Street Journal. "After Tuesday’s discussion, both sides said they were willing to continue their discussions without decisively establishing whether a deal will be possible."

An additional round of talks is scheduled Wednesday morning.  In the meantime, Senate Majority Leader McConnell continues to try and warn the President off of agreeing to anything resembling the package under discussion, but has not said he will block it from coming to the Senate floor.

There is a wide range of projections about how this all works out.  Plausible outcomes include:

PASSAGE – Pelosi and Mnuchin strike a deal by Friday, staff works over the weekend, and the legislation (or at least the 2nd draft of the legislation) passes next week.  The legislation is expected to closely follow Mnuchin’s last proposal.  Pelosi delivers almost all of her Democrats, with possible defections limited to the Ocasio-Cortez crowd.  A significant number of Republican House members, and possibly a majority, join them.  Schumer delivers the Senate Democrats and Trump strong arms the Senate Republicans into approving the legislation.

FAILURE – Trump decides he can win without COVID legislation, or otherwise loses interest in the process.  If at any time Trump decides not to push things along, the whole process collapses regardless of what others do.

Provisions raised in these discussions include additional Paycheck Protection Program funding, another round of checks to individuals, state and local tax discussions, loss deduction rules, and increases in earned income credits and child credits. Stay tuned.

Senate Votes Down PPP Extension - Jad Chamseddine, Tax Notes. "Democrats have been holding out for a larger relief package aimed at helping businesses, states, and taxpayers."

Although the Biden website does not provide details, Biden has stated that estate taxes should be “raised back to the historical norm.” He has also stated that we should restore the nominal estate, gift and generation-skipping transfer tax provisions in effect in 2009. This would include lowering the estate and gift tax exemption from $11,580,000 in 2020 per person to $3,500,000 per person ($7 million for married couples) and raising the maximum estate and gift tax rate from 40 percent to 45 percent. It has alternatively been suggested that Biden would seek to lower the exemption amount to pre-TCJA levels, which would be $5 million per person, presumably indexed for inflation.

IRS Touts More Flexible Payment Arrangements to Boost Compliance - William Hoffman, Tax Notes. "The IRS is offering installment agreements without supporting financial statements to taxpayers owing up to $250,000 who can pay in full within the statutory time, a senior agency official said."

88% of Expatriates Have a Net Worth of Less than $2 Million - International Tax Blog:

I am often asked: Is it mostly wealthy individuals that are expatriating?  Defining the threshold of when an individual should be considered “wealthy” is a sensitive issue.  However, Congress seems to have set the threshold at a net worth of $2 million in 2008.  If you use $2 million of net worth as the definition of “wealthy”, it can be stated that IRS data indicate that 88% of individuals expatriating are not “wealthy”.

The large penalties and banking hassles encountered by Americans living abroad can make citizenship a significant hassle. Americans planning a foreign stint need to plan around these rules.

FAQs Could Be Updated for Those Who Lost Impact Payment Notices - Wesley Elmore, Tax Notes. "Taxpayers who threw out the notices they received regarding the amount of their economic impact payments (EIP) should keep an eye on the IRS website for updated FAQs addressing how to reconcile the amount of those payments on their 2020 returns."

2021 State Business Tax Climate Index - Jared Walczak and Janelle Cammenga, Tax Policy Blog. "The Tax Foundation’s State Business Tax Climate Index enables business leaders, government policymakers, and taxpayers to gauge how their states’ tax systems compare. While there are many ways to show how much is collected in taxes by state governments, the Index is designed to show how well states structure their tax systems and provides a road map for improvement." 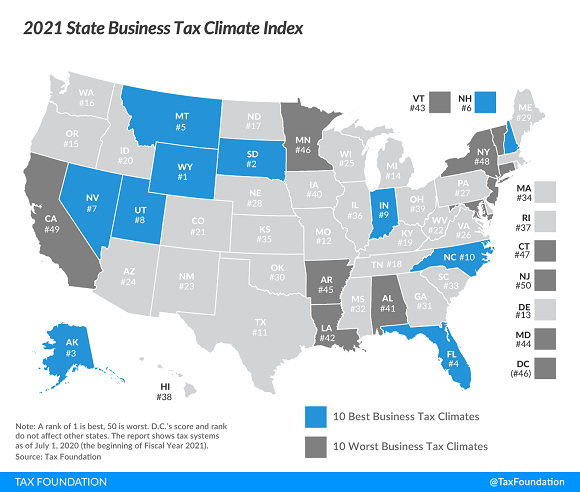 The study comments on Iowa:

On the corporate tax front, Iowa policymakers decoupled from IRC § 163(j), the net interest limitation, and fully decoupled from the Global Intangible Low-Taxed Income (GILTI) provision, which, when incorporated into state tax codes, leads to state taxation of international income. These changes improved Iowa’s corporate component rank by two places. The state also, as part of the ongoing implementation of a larger tax reform package, increased the Section 179 expensing allowance from $100,000 to $1 million, matching the federal level, leading to a two-place improvement on the individual component rank as well. These reforms, taken together, drove Iowa’s improvement from 45th to 40th on the Index overall.

Minnesota conforms to Federal Section 179 in new legislation. The Minnesota Society of Certified Public Accountants reports that new legislation conforms Minnesota's Section 179 deduction to federal rules. Setion 179 allows business owners to expense many fixed asset costs that would otherwise be capitalized and deducted over multiple years through depreciation. The federal limit for 2020 is is $1,040,000; the deduction phases out as assets placed in service in the year exceed $2,590,000. 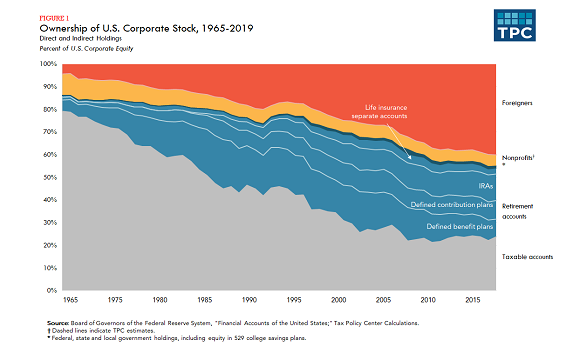 My guess is that when your have corporation income tax twice, corporate ownership will shift towards accounts that don't face the second tax, like retirement accounts. The increase in foreign ownership is what I think would be expected with a trade deficit - an investment surplus may be the balancing entry of a trade deficit. The figures may also indicate that the US is considered a good place to invest.

Revenue Procedure 2009-20 Ponzi Scheme Safe Harbor Deduction Must Be Claimed in Year Provided in the Revenue Procedure - Ed Zollars, Current Federal Tax Developments. "The ruling was issued following the confession of Bernie Madoff to having run one of the largest Ponzi schemes ever. The procedure allowed taxpayers to claim theft losses from such schemes under a simplified reporting method.  If a taxpayer is not pursuing a potential third-party recovery, the taxpayer may claim as a loss 95% of the qualified investment.  In this case, the key issue was when that deduction had to be claimed under the revenue procedure."

West Des Moines club owners charged with tax evasion - William Morris, Des Moines Register. "According to the complaints, Xcaret paid no sales taxes and received no tax withholding permits from the fourth quarter of 2018 through the end of 2019. Over that time, the bar made more than $124,000 in sales, according to payment processing records. The complaints also note neither [of the owners] have filed individual tax returns since 2011."

Perhaps not a sustainable approach to tax planning.

Today in History: Los Angeles Rams defensive end Fred Dreyer became the first player in NFL history to record two safeties in a single game - sacking two different Packers quarterbacks in a the 4th quarter of a 24-7 victory over Green Bay on this date in 1973.