October 15 deadline nears for taxpayers who requested tax filing extensions - IRS. "The Internal Revenue Service today reminds taxpayers who filed an extension that the Oct. 15 due date to file their 2019 tax return is near. Taxpayers should file their tax returns on or before the Oct. 15 deadline. For those who still owe, pay as soon as possible to reduce any penalties and interest."

You are required to file the FBAR if you have $10,000 aggregate at any time during the previous year in one or more foreign financial accounts. These include the obvious (non-US bank accounts and non-US brokerage accounts) to the not so obvious (most online gambling accounts). Penalties for not filing the FBAR are stiff (to say the least). Non-willful penalties begin at $10,000 while willful penalties start at the greater of $100,000 or half the balance in the account—yes, that penalty is per account.

With e-filing, be it via tax software on your computer or via the more popular this year Free File, you have until the very last minute to hit send on your computer keyboard, although I suggest you not wait that late just in case there are technical issues on your or the software's or the IRS' part.

If, however, you're still a tax traditionalist and prefer filling out your return by hand on actual paper forms, check out these snail mail tips to get your extended filing to the IRS on time.

Yes, don't do the last-minute-send thing.

Papers filed by Prince’s Estate in U.S. Tax Court show that the estate reported a taxable value of $82 million, but the IRS claims that the estate’s taxable value is really a whopping $163 million. Thus, on top of the tax that the estate is already reporting, the IRS wants an additional $38.7 million more in taxes. The IRS is disputing the value an a vast array of assets, from real estate, to image rights to interests in companies. In almost every case, Prince’s Estate obtained appraisals to substantiate the reported value, but the IRS has its own appraisers who say it is all worth more, a lot more.

As the law stands now, the lifetime exemption amount for estate and gift taxes is scheduled to decline from its current level of $11.58 million to $5 million in 2026. A Democratic sweep of the election next month could move that date up.

The mail backlog is now at 5.3 million, about half of what it was a few months ago, and the IRS is using multiple shifts, overtime pay and mail shipments to less-stressed facilities to whittle that down. The agency is opening about 1.3 million pieces of mail a week but also receiving 300,000 to 500,000 each week, suggesting that the backlog could be cleared within a month or two.

I'm seeing IRS responses in the last two weeks responding to filings made back in February.

Trump’s $72.9M Refund: Breaking Up Is Hard to Do - Kristen Parillo and Eric Yauch, Tax Notes ($). "The partnership abandonment claim purportedly at the heart of an audit dispute between the IRS and President Trump could spotlight the knotty rules around claiming ordinary losses from investments in distressed partnerships."

"Nevertheless, even if Trump can prevail on a worthlessness claim, he would still have to wrestle with section 752(b), August said. “He’s still being relieved of 23.5 percent of the partnership’s liabilities,” he said. “Mechanically, it’s being shifted somewhere, so there has to be some reckoning with that debt.”

Taxpayers hoping to just walk away from an unhappy partnership investment may find it to be a tough stroll.

The Times report focuses on an aspect of the state and local tax deduction that is still not fully appreciated in D.C. policy circles. Everyone knows that, since 2017, taxpayers have only been allowed to deduct up to $10,000 in personal state and local taxes for federal purposes. By contrast, there is essentially no limit on the deductibility of business taxes paid to state and local governments.

This anomaly has led several states to move to "optional" or mandatory taxes on pass-through entities. Taxes paid by partnerships and S corporations at the entity level have historically been part of the net income of the business. Taxes paid on earnings by individual owners, by contrast, are itemized deductions subject to the $10,000 cap. While the effectiveness of entity level taxes when paid at the option of the business in avoiding the cap isn't entirely clear, the IRS has yet to move against them.

Does Your State Have a Throwback or Throwout Rule? - Janelle Cammenga, Tax Policy Blog:

When companies sell into a state where they do not have nexus, that destination state lacks jurisdiction to tax the company’s income. This results in what is known as “nowhere income”—income that cannot legally be taxed by the state where the income-producing sale occurs.

Under throwback rules, sales of tangible property which are not taxable in the destination state are “thrown back” into the state where the sale originated, even though that’s not where the income was earned. This means that if a company located in State A sells into State B, where the company lacks economic nexus, State A can require the company to “throw back” this income into its sales factor. 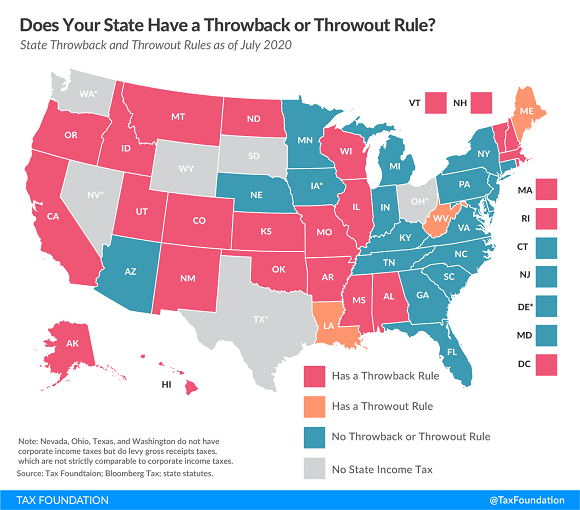 When a Friend Really Isn’t a Friend: Phishing Scams and Manufacturing - Trent Leavitt, Eide Bailly. "Email spoofing can happen to anyone. Now is the time to protect yourself and your company from hackers."

Pre-PPPFA Loans Do Not Have to Be Modified for Extended Deferral Period - Ed Zollars, Current Federal Tax Developments. "The SBA has added a question and answer to the Paycheck Protection Program Loans Frequently Asked Questions to clarify how the extension of the deferral period in the Paycheck Protection Program Flexibility Act affected loans that were already in place when the PPPFA was enacted."

Proposed Bill Will Not End Conservation Easement Tax Abuse - Peter Reilly, Forbes. "You really don’t need a new law to address this particular abuse. The worry is that the law would seem to bless transactions that are not so nakedly abusive."

Charitable Conservation Easements Remain Under Attack—The Latest IRS Data - Jason Freeman, Forbes. "The Finance Committee’s report indicates that the IRS is either auditing or planning to audit more than 80 percent of partnerships identified as vehicles for syndicated conservation easement."

Today in history: Don Larsen pitches the only perfect game in World Series history in 1956.

In over 218,000 major league games, going back the 19th Century, there have been 23 games where one team had no base runners. To do it in the World Series... wow.

Fun fact: "Larsen's perfect game was the only postseason game in which any team faced only the minimum 27 batters until Kyle Hendricks and Aroldis Chapman of the Chicago Cubs combined to accomplish the feat in the decisive sixth game of the 2016 National League Championship Series." But that required double plays to erase base runners.