The IRS is “often the target of threats from individuals and organizations looking to do it harm” and must have policies in place to mitigate those threats, the Treasury Inspector General for Tax Administration said in a report dated September 14 and released September 19.

Concerns about the safety of employees at the IRS and other federal agencies have intensified amid recent threats stemming from conspiracy theories suggesting that the IRS is going to use some of its new funding from the Inflation Reduction Act (P.L. 117-169), signed August 16 by President Biden, to hire thousands of new armed agents to target members of the public.

The IRS certainly needs security measures. One disgruntled taxpayer went so far as to crash an airplane into an IRS office in Austin, Texas in 2010. Unfortunately, it can be hard to keep increased security measures from inconveniencing ordinary taxpayers.

The veto is a disappointment to opponents of vaping, who hope that restricting the age at which young adults can purchase tobacco or vaping products will deter more people from developing an addiction. However, Dunleavy’s decision is a relief to industry groups that argued against the bill and to vaping proponents who claim that it is a less harmful vice than smoking cigarettes.

“Despite the all-too-rampant alarmism, e-cigarettes are significantly less harmful than combustible tobacco and, in some countries — primarily those with socialized healthcare — governments are actively promoting the transition from deadly combustible tobacco to the far less harmful vapor products category," according to a letter to lawmakers by the Smoke-Free Alternative Trade Association, a vaping industry trade group. The letter was included in testimony submitted on a previous version of the bill.

The Sec. 179D deduction allows for-profit taxpayers to currently deduct costs of energy-efficient buildings, rather than recovering the cost over up to 39 years via depreciation deductions. The new law provides a way for non-profits to use the benefit.

The Inflation Reduction Act increased the deduction amount to $5 per square foot from $1.88. The law also established a sliding scale for the tax deduction range, decreasing the “energy use intensity” to 25% from 50%.

Because the deduction amount increased so much, “I would fully expect the not-for-profits to do some sort of negotiation with the designers, in the form of contract reductions or free change orders,” said Joe Sawatske, principal of energy incentives at Eide Bailly.

The NTA Reimagines the IRS with a Dramatically Improved Taxpayer Experience: Part Two - Erin Collins, NTA Blog. Erin Collins is the National Taxpayer Advocate, an IRS employee responsible for advocating taxpayer interests in the agency. Among her recommendations:

Create robust and accessible online accounts with functionality rivaling the best financial institutions and through which taxpayers and practitioners can access, download, and upload all relevant information. Of all the steps the IRS can take to improve the taxpayer experience, creating robust online accounts should be a top priority and will be the most transformational immediate improvement the IRS can make. Most of us have been conducting business with our financial institutions digitally for two decades or more – paying bills, transferring funds, depositing checks, applying for loans, trading stocks and mutual funds, etc. While we occasionally still need to visit, call, or send correspondence to our financial institutions, online transactions have become the norm.

The IRS needs to offer online accounts with comparable functionality – the ability to file tax returns, make payments, view transactions, receive or view tax adjustment or other notices, respond to tax adjustment or other notices, upload and download documents, and submit questions or live chat with an IRS employee – which in most cases will eliminate the need for visiting, calling, or sending correspondence. And importantly, online accounts should be accessible for all taxpayers, including individuals, businesses, and other entities – and should provide practitioners the ability to access their client’s online information.

Long overdue, and it will probably stay that way for some time.

Advocates for charities and other tax-exempt groups are hoping to at least restore a charitable deduction that lawmakers gave to taxpayers who don’t itemize their returns.

That's the $300 charitable deduction for non-itemizers, later increased to $600, but which expired after 2021.

As for the charitable deduction for non-itemizers, the Penn-Wharton Budget Model projected that policy would cost about $2 billion in 2020, while only spurring around $110 million in extra donations. (Most of the benefits also went to the upper-middle class and above, according to the Wharton model.)

Like the $250 educator expense deduction, it is too small for the IRS to audit, making it a low-risk gamble for non-qualifying taxpayers to claim it.

Fifth Circuit Upholds Constitutionality of Passport Revocation Statute - Leslie Book, Procedurally Taxing. "This is the third circuit to uphold the constitutionality of the passport revocation statute, and while it acknowledges that the government international travel is not to be taken lightly, the opinion is a major government victory for an important collateral tool to collect from taxpayers who have failed to pay sizable liabilities."

The IRS today updated information on the Work Opportunity Tax Credit (WOTC), available to employers that hire designated categories of workers who face significant barriers to employment. For employers facing a tight job market, the WOTC may be able to help.

Today's updates include information on the pre-screening and certification process. To satisfy the requirement to pre-screen a job applicant, on or before the day a job offer is made, a pre-screening notice (Form 8850, Pre-Screening Notice and Certification Request for the Work Opportunity Credit) must be completed by the job applicant and the employer.

Get a Tax Break Like a Billionaire on Your Political Donations - Laura Saunders, Wall Street Journal. "On Sept. 15, the left-leaning Patagonia founder Yvon Chouinard announced he is donating 98% of the company, a multibillion-dollar outdoor-apparel business, to a nonprofit group to address climate change... Unlike a gift to a charity, Mr. Seid’s donation wasn’t eligible for a tax deduction—but he also didn’t owe capital-gains tax or gift tax on it."

Net Operating Loss Carryforward and Carryback Provisions in Europe - Daniel Bunn, Tax Policy Blog. "Ideally, a tax code allows businesses to carry over their losses for an unlimited number of years, ensuring that a business is taxed on its average profitability over time. While some countries do allow for indefinite loss carryovers, others have time limits. The following two maps look at this time restriction on loss carryovers, showing the number of years a business is allowed to carry forward and carry back net operating losses (NOLs)." 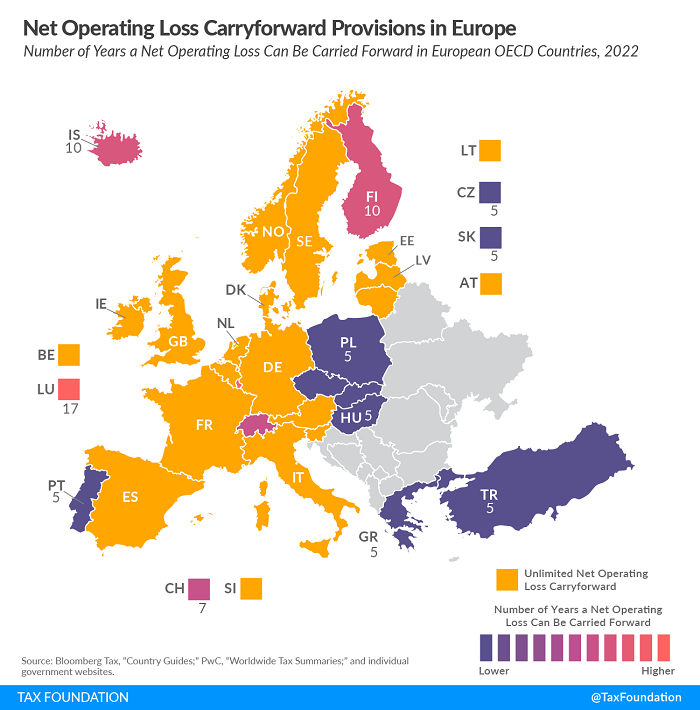 NBA Owner’s $10 Million Fine Is No Slam Dunk as a Tax Deduction - Richard Fox, Bloomberg. "Despite the vast array of fines that have been imposed on professional athletes and their coaches, there is little authority on the deductibility of fines in professional sports."

Harsh 19 Years Prison For False IRS Tax Returns - Robert Wood, Forbes. "Saying different things to your bank and to the IRS can be a major mistake."

The OECD Tax Agreement: A Global Shift, or a Shifty Promise? - Alex Parker, Things of Caesar ($). "Under Pillar Two, a country can implement an 'income inclusion rule,' and tax the foreign income of its taxpayers, if that income is not taxed by a foreign jurisdiction above the 15% rate. The formula also includes a carveout for tangible property and payroll, to better target the jurisdictions involved in avoidance or profit-shifting."

Private Equity Is A Business Subject To The New Book Minimum Tax. Treasury Should Say So. - Steven Rosenthal, TaxVox. "When the Senate added a new corporate minimum tax to the Inflation Reduction Act (IRA), it almost added a clarification that private equity is a business that would be subject to the new tax. But two key Senators blocked the clarification."

A Southern Illinois University math professor was sentenced Monday to a year of probation after being convicted of concealing a Chinese bank account from federal officials investigating him as part of a controversial Trump-era program to combat trade secret theft.

Defendant, who is on administrative leave from his job at Southern Illinois University, was convicted in May on three counts of filing false income tax returns and one count of failing to report a foreign bank account. He was acquitted of two wire fraud charges and making a false statement relating to a federal grant, the initial charges prosecutors filed as part of the now-defunct China Initiative.

But only one honoree gets a belly rub. We can celebrate National Dog Week and National IT Professionals Day today.