Due date reminder. Extended partnership and S corporation returns are due tomorrow. So are 3rd quarter individual and calendar-year corporation estimated payments. If you pay electronically, queue up your payments today to ensure that they will be credited on time. Get your e-file authorizations in your preparer's hands by tomorrow so they can file on time. If you must paper file, spend an extra three bucks or so for a certified mail postmark to document timely filing.

A group of Democratic lawmakers suggested that they will prevent the extension of corporate tax benefits if Congress fails to restore the expanded child tax credit.

However, the coalition of progressives has also obstructed provisions that would restore immediate research and development expensing for companies over their insistence on an expanded child tax credit, most recently in negotiations over semiconductor legislation that passed the Senate on July 27.

Research expenses incurred in years starting in 2022 must be capitalized and amortized over five years as a result of a 2017 tax act provision.

The Expanded CTC Lifted Nearly 3 Million Children Out Of Poverty In 2021 - Renu Zaretsky, Daily Deduction. "Census Bureau data show that 5.2 percent of children were in poverty in 2021, far fewer than the 9.2 percent in 2020. Census credits much of the decline to the American Rescue Plan’s expanded child tax credit. The agency estimates the expanded CTC  lifted 5.3 million out of poverty in 2021, including 2.9 million children—one million of whom were under age six."

High inflation expected to lead to big changes in tax brackets and exclusions - Michael Cohn, Accounting Today. "Bloomberg Tax forecasts that inflation-adjusted amounts in the Tax Code will increase by approximately 7.1% from 2022, more than double last year's increase of 3%. The company also projects that several key deductions for taxpayers will experience significant year-over-year increases, with the foreign earned income exclusion growing to $120,000 from $112,000 and the annual exclusion for gifts increasing to $17,000 from $16,000, enabling taxpayers to increase their gifts without tax implications."

From the story, the projected joint return brackets: 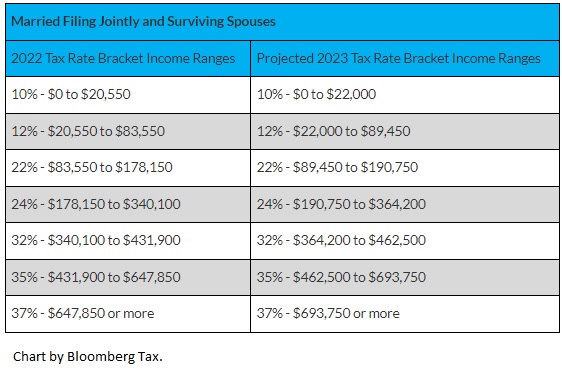 The IRS explained that taxpayers must claim the one-time alternative fuel credit for 2022 by April 11, 2023, noting that any claims filed after that deadline won’t be processed. Taxpayers making claims must file Form 8849, “Claim for Refund of Excise Taxes,” and include Schedule 3, “Certain Fuel Mixtures and the Alternative Fuel Credit.”

The IRS has indicated it's on the way to clearing a massive, pandemic-caused backlog of unprocessed returns, but tax practitioners said they've seen no sign of improvement in the agency's troubled phone service dedicated for their use.

Instead, stories of long delays and unanswered calls to the IRS' Practitioner Priority Service (PPS) persist, along with the frustration of lawyers, tax accountants, and others who say the phone line is effectively broken.

It works fine if you don't mind waiting hours for a "courtesy disconnect," over and over.

The market is forming because Congress last month expanded renewable-energy tax credits and made them transferable in the law known as the Inflation Reduction Act, which also lowers prescription drug prices and imposes new taxes on large corporations.

Within a year or two, it could be easy for a corporation with no direct renewable-energy investment—a profitable retailer, pharmaceutical maker or high-tech company—to purchase tax credits. Because of the expected discounts, companies could earn an instant profit, paying $90 or $95 for a $100 coupon off their income-tax liability.

There will be no unintended consequences.

James Taylor kicks off White House event touting Inflation Reduction Act - Brad Dress, The Hill. "The celebration came on the heels of a report released Tuesday that shows consumer prices remain high despite slowing inflation in August. Consumer prices were 8.3 percent higher in August compared with last year, according to the latest Consumer Price Index report, a drop from the 8.5 percent surge in July and below June’s four-decade high of 9.1 percent, but still higher than economists predicted. While gas prices continued their downward slide, prices for groceries were up 11.4 percent in August year over year, the largest yearly jump since 1979."

"Because the IRS did not assess Kroner's penalties without a supervisor approving an 'initial determination of such assessment,' we hold that the IRS has not violated Section 6751(b)," it added.

The Tax Court found in June 2020 that Kroner couldn't treat $24.8 million in transfers from a British business partner as gifts for tax purposes. It determined that Kroner's story advocating for treating the funds as gifts wasn't credible, and they're better considered income, according to the opinion.

The IRS is refunding a staggering $1.2 billion in late filing fees - Michelle Singletary, Washington Post. "This unprecedented relief is an acknowledgment of the difficulties taxpayers have faced during the pandemic. While in ordinary filing seasons the IRS penalizes taxpayers for procrastination, the agency is signaling that it realizes that’s too harsh for many people who may have struggled to file their returns because of the pandemic."

A Record 19 Million Americans Asked the IRS for Tax Extensions. It Wasn’t Just Procrastination. - Ashlea Ebeling, Wall Street Journal. "'Everybody is still behind,' said Darren Neuschwander, an accountant and chairman of the American Institute of CPAs’ individual and self-employed tax committee. 'I know the IRS is encouraging us to file the returns, but we don’t have the information to complete them.'"

The current tax law makes the April 15 deadline impossible for more taxpayers every year. Requiring extension filing to get an extended deadline just allows the IRS to make money by foot-fault fines on late filings.

Some Mississippi taxpayers get more time to file in wake of Jackson's water crisis - Kay Bell, Don't Mess With Taxes. "The most immediate tax relief, as noted at the top of this post, involves this week's estimated tax deadline. Affected Mississippi taxpayers now have until Feb. 15, 2023, to pay any third quarter estimated tax normally due on Sept. 15. In addition, the fourth and final tax year 2022 estimated tax payment due on Jan. 15, 2023, also is pushed to Feb. 15, 2023."

Residential builders stand to benefit from energy-efficiency credit extension - Kristin Gustafson, Eide Bailly. "This $2,000 per unit credit applies to multifamily units three stories or less (above grade) and single-family homes first occupied in an open tax year and prior to January 1, 2023."

Here are the states losing and gaining rich young professionals - Gianna Melillo, The Hill. "New data from SmartAsset show more young wealthy Americans are moving to states like Florida and Texas, where there is no income tax."

Uber Shells Out $100M To NJ In Driver Classification Fight - Hailey Konnath, Law360 Tax Authority ($). "While New Jersey's Department of Labor and Workforce Development contends that Uber's drivers should be classified as employees, Uber maintains that its drivers are independent contractors. The payments aren't part of a settlement, per the company."

$80 Billion in New Funding: What’s Next for the IRS? - David Stewart, Jonathan Curry, and Robert Kerr, Tax Notes Opinions. "I would also clarify for the audience here that current Congress can't tie the hands of future Congress. So what we have here is as long as we have a Democratic president — the next two years — IRS is good to go. What happens in another two years? Well, that will remain to be seen."

Industrial Policy Is Back. What Will It Mean For Taxes? - Howard Gleckman, TaxVox. 'Industrial policy is trending. At a time when few policy ideas win bipartisan support, government subsidies for favored industries are feeling the love from Democrats and even many Republicans. But how these benefits are delivered to businesses, through direct subsidies or tax policy, matters a lot."

The Tax Court has concluded that $8.7 million in payments made by a corporation to a disgraced CPA and other entities he controlled were constructive distributions, finding him liable for $5.4 million in back taxes, fraud penalties, and additions to tax.

With SPI, [Taxpayer] entered into purported sale-and-leaseback transactions to purchase $32 million in computer hardware and software equipment. In reality, SPI never purchased the equipment, or it purchased substantially less expensive equipment than it was purported to be buying... Most of the money obtained by [Taxpayer] was used to buy beach property in North Carolina, take flights on private jets, and pay for his children’s private school education.

The taxpayer walked into Tax Court at a disadvantage. Judge Halpern's Tax Court opinion fills in some details:

Petitioner pleaded guilty to mail fraud and to making and submitting a false tax return for 2003 in violation of section 7206(1).

That may have made a bad first impression on the trial judge. The taxpayer's vacation habits may not have done anything to erase the bad impression:

From 2000 through 2005, petitioner vacationed with his family in North Carolina, and, during that period, he testified, he and his wife purchased at least two beach houses there. In 2003 and 2004, he caused SPI, Inc., to transfer $538,458 and $35,000, respectively, to Ocean Quest, which it used to purchase beach houses in Holden Beach, North Carolina. Petitioner was both managing director and a member of Ocean Quest, and, while the record is silent as to the identity of the other members, we think it a fair inference that his wife and, perhaps, other family members were the remaining members...Petitioner's exercise of his control over SPI, Inc., to direct funds to Ocean Quest for no apparent benefit to the former and for his own benefit is sufficient for us to conclude that the moneys paid to Ocean Quest constituted constructive distributions by SPI, Inc., to petitioner...

Judge Halpern concluded that the taxpayer owed tax and 75% fraud penalties on $8.7 million of unreported income.

The moral? Pleading guilty to criminal tax fraud may not be helpful in Tax Court. Also, having your corporation buy toys for you can give you taxable income, even if nothing actually hits your bank account.