The August 15 letter piggybacks on National Taxpayer Advocate Erin Collins’s midyear report, which took a decidedly skeptical view of Rettig’s pledge. In her report, Collins said that despite Rettig’s assurance that the IRS was on track to “crush the backlog” of paper tax returns and other documents by the end of the year, the “backlog is still crushing the IRS, its employees, and most importantly, taxpayers.”

In case you are wondering where that refund is.

What's really going on with this $80B - Bernie Becker, Politico:

It’s also worth noting that Natasha Sarin, a top Treasury official, said the IRS will produce a detailed report spelling out in more detail how the tax collector will use the extra funding. (That would’ve been required under the Democrats’ bill, before the Senate parliamentarian tossed out that provision.)

But let’s be honest: it’s unlikely that more details from the Biden administration will assuage all of the concerns coming out of the GOP. And to be fair, the red line at $400,000 could create some tricky spots for the tax collector. It’s not like the IRS always knows exactly how much someone makes until it actually completes an audit.

The IRS has announced (Rev. Rul. 2022-15) the interest rates for taxpayer underpayments and overpayments for the fourth quarter of 2022:

The rates are an increase of one percentage point over last quarter. The individual underpayment rate for the fourth quarter of 2021 was 3%.

Foreign Currency Regs Get Yet Another Delay - Kristen Parillo, Tax Notes ($). "The government’s decision to continually delay operation of the new rules hasn’t surprised anyone, given that many tax professionals and even some government attorneys believe they are overly complicated and will be difficult for IRS examiners to audit."

Corporations facing new book tax and stock buyback levy - Michael Cohn, Accounting Today. "Sen. Kyrsten Sinema, D-Arizona, insisted on creating an exemption for accelerating depreciation deductions as one condition for agreeing to support the legislation, so companies such as manufacturers will still be able to take advantage of the accelerated bonus depreciation to buy equipment, for example, and it will be exempted from the corporate minimum tax (see story)."

IRS reminds all truckers the deadline to file and pay heavy highway vehicle use tax is Aug. 31 - IRS:

The heavy highway vehicle use tax is a federal excise tax. These taxes are used to pay for highway and mass transit projects. It is annual tax on heavy highway motor vehicles operating on public highways with a taxable gross weight of 55,000 pounds or more. The deadline to file and this tax is Wednesday, August 31, 2022.

All taxpayers who file Form 2290 are encouraged to do so electronically. Those with 25 or more taxed vehicles must e-file. All the information needed to file is on the Trucking Tax Center.

New 25% Chip Tax Credit Sparks Interest Amid Uncertainty - Kat Lucero, Law360 Tax Authority ($). "Semiconductor companies can receive a 25% tax credit thanks to a new law designed to help boost domestic chip production, but the incentive has practitioners uncertain as to what kind of investments can qualify."

Prosecutors Struggle to Catch Up to a Tidal Wave of Pandemic Fraud - New York Times (possibly $). "Investigators say there was so much fraud in federal covid-relief programs that — even after two years of work and hundreds of prosecutions — they’re still just getting started."

Idaho's Tax Ballot Measure's Errors are Real and Significant - Jared Walczak, The SALT Road. "Idaho’s existing income tax brackets are inflation-adjusted to avoid bracket creep. The new $250,000 bracket would also be inflation-adjusted (though in a way that creates a tax cliff—more on that later), but there’s an extraordinary error in the language. The numerator and denominator are reversed, such that the kick-in of the new top marginal rate gets lower as inflation erodes the value of the dollar, rather than higher. If we had 2.5 percent annual inflation from here on out, the kick-in would have eroded the value of the top rate kick-in by 40 percent within a decade."

ND Pot Legalization Question Cleared For Ballot - Sam Reisman, Law360 Tax Authority ($). "The proposal does not include any new taxes or any language about expunging convictions for marijuana-related crimes prior to legalization."

Does Your State Have a Marriage Penalty? - Janelle Fritts, Tax Policy Blog. "Sixteen states have a marriage penalty in their individual income taxes. Fifteen of those are built into their bracket structure. Washington notably does not have a wage income tax but instead levies a capital gains tax with a $250,000 filing threshold. Because this threshold is not doubled for married filers, the state has an unconventional marriage penalty." 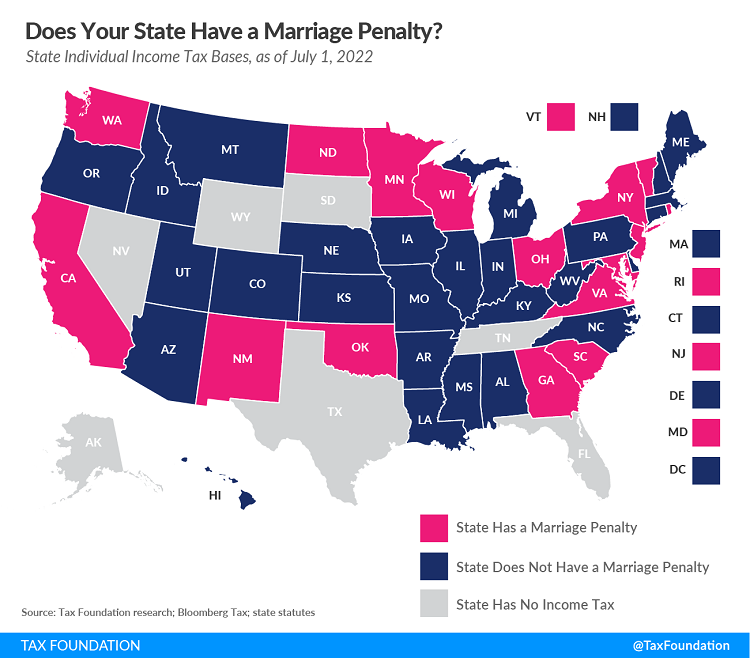 Taxpayer Advocate recommends compensation for some no-change audits - Kay Bell, Don't Mess With Taxes. "In both her 2021 and 2022 annual reports to Congress, published as the Purple Book, National Taxpayer Advocate Erin M. Collins has suggested ways to compensate taxpayers in no change research program audit cases."

An Interpretive Battle Among Textualists Judges Over Statute Criminalizing False Liens Against U.S. Officers or Employees - Jack Townsend, Federal Tax Crimes, quoting a recent appeals court opinion holding that laws against filing fake 1099s and liens on public officials also applies when it is done to former officeholders: "There is no dispute that Pate filed the false liens to retaliate against Lew and Koskinen for acts they performed as part of their official duties. The twist here, and what makes this a case of first impression for this Court, is that Pate filed the false liens after Lew and Koskinen had left their positions with the federal government. We therefore are presented with the following question: Does § 1521 apply to false liens filed against former federal officers and employees for official actions they performed while in service with the federal government? We conclude that the answer to this question is yes—the plain language of § 1521 covers both current and former federal officers and employees."

Settlement In A Low Income Housing Tax Credit Year 15 Appeal - Peter Reilly, Forbes. "The projects are committed to an additional fifteen years of affordability, but that is enforced by the state housing agencies. The credit is no longer at risk. This makes Year 15 a logical exit point for the investor entity."

Church Status: Can (and should) your religious nonprofit seek church status with the IRS? - Cory Halliburton, Freeman Law. "If the organization already exists and has been granted public charity status, a request for church status is made by use of IRS Form 8940 – Request for Miscellaneous Determination; exemption from Form 990 filing requirements."

Ignore the Debate Over Whether the Inflation Reduction Act Raises Taxes on Those Making $400,000 Or Less - Howard Gleckman, TaxVox. "As Congress is about to pass the Inflation Reduction Act, Washington is once again having a breathless debate over very little. This one is about whether Democrats are violating President Biden’s pledge to not raise taxes on households making $400,000 or less annually. But here’s the secret: This is yet another ridiculous political argument."

The Trump Organization’s chief financial officer is coming close to reaching a plea deal in a case investigating whether he funneled off-the-books income to himself and other executives at the company, but the potential deal reportedly does not bring prosecutors any closer to their main target: former President Trump.

Last June, criminal indictments were filed against Weisselberg and the Trump Organization related to charges that the company avoided paying taxes on fringe benefits such as cars, apartments and other bonuses they received through the company.