The department issued corrections Tuesday to rules released in December that have drawn furious complaints from multinational companies. The change makes clear that foreign income taxes don’t have to precisely mirror U.S. income-tax rules for when certain costs can be deducted in order to qualify for foreign tax credits.

But the news isn't all good:

Even if the proposal announced Tuesday went into effect, the result would still be that some taxes that have long qualified for foreign tax credits would no longer do so. That is likely to be a particular problem for companies operating in Brazil, which has an income tax that departs from international norms. Other countries may also be affected.

The Treasury spokesman who announced the rule changes said the government will not provide a list of countries whose taxes are eligible for the credit, creating uncertainty for filers.

Jamie Brown of Ivins, Philips & Barker said the clarification is welcome because “initially, Treasury seemed to blame advisers for reading the requirements too narrowly. It was more appropriate for Treasury to remove the ambiguity, as they have done.”

By a vote of 64 to 32 that signaled the approval of 17 Republicans and 47 Democrats, the chamber invoked cloture on July 26 to end a potential filibuster on the “CHIPS and Science” bill, as Majority Leader Charles E. Schumer, D-N.Y., dubbed the legislation in a Senate floor speech.

While the bill falls short of the aims of the United States Innovation and Competition Act of 2021 (USICA, S. 1260), another semiconductor manufacturing bill that is still in conference committee, the motion marks a significant step toward enacting $52.2 billion in funding for semiconductor chips, a 25 percent refundable tax credit for their manufacturers, and new requirements for the National Science Foundation, among other provisions designed to increase U.S. competitiveness with China.

Senate Finance Committee Chair Ron Wyden, D-Ore., says that a lack of resources is at the root of all the IRS’s problems, including its ability to conduct tax administration research through an annual audit program.

Wyden drew that conclusion after a meeting with IRS Commissioner Charles Rettig, who appeared before the committee to address senators’ concerns about the agency’s National Research Program (NRP) audits. The meeting was set up shortly after the IRS’s intensive audits of former FBI heads James Comey and Andrew McCabe were disclosed July 6 in The New York Times.

That's an interesting way to address concerns that Trump opponents were targeted for audits.

In a reoccurring and very successful scam, criminals posed as potential clients, exchanging several emails with tax professionals before following up with an attachment that they claimed was their tax information. This scam gained energy as many tax professionals worked remotely and communicated with clients over email versus in-person or over the telephone because of the pandemic.

Once the tax pro clicks on the embedded URL and/or opens the attachment, malware secretly downloads onto their computers, giving thieves access to passwords to client accounts or remote access to the computers themselves.

The American Institute of Certified Public Accountants (AICPA) wrote a letter to Commissioner Rettig and Assistant Secretary for Tax Policy Lily Batchelder on July 11, 2022, making several requests related to the difficulties at the IRS resulting from the pandemic which has translated into difficulties for taxpayers and their representatives.  The letter makes reasonable requests that deserve attention and that can be addressed through administrative action rather than legislation. ...

In place of the current information flow the AICPA letter recommends: 1) increasing the level of detail on returns processed; 2) providing regular information on the status of processed mail; 3) providing expected times for IRS responses to taxpayers and practitioners regarding correspondence; and 4) providing regular, widely publicized updates on getting back to pre-pandemic inventory levels.

Beer Taxes in Europe - Adam Hoffer, Tax Policy Blog. "EU law requires every EU country to levy an excise duty on beer of at least €1.87 per 100 liters (26.4 gal) and degree of alcohol content. That amounts to a minimum tax of €0.03 (US $0.04) for a 330ml (11.2 oz) beer bottle with 5% alcohol content. As this map illustrates, only a few EU countries stick close to the minimum rate; most levy on much higher excise duties." 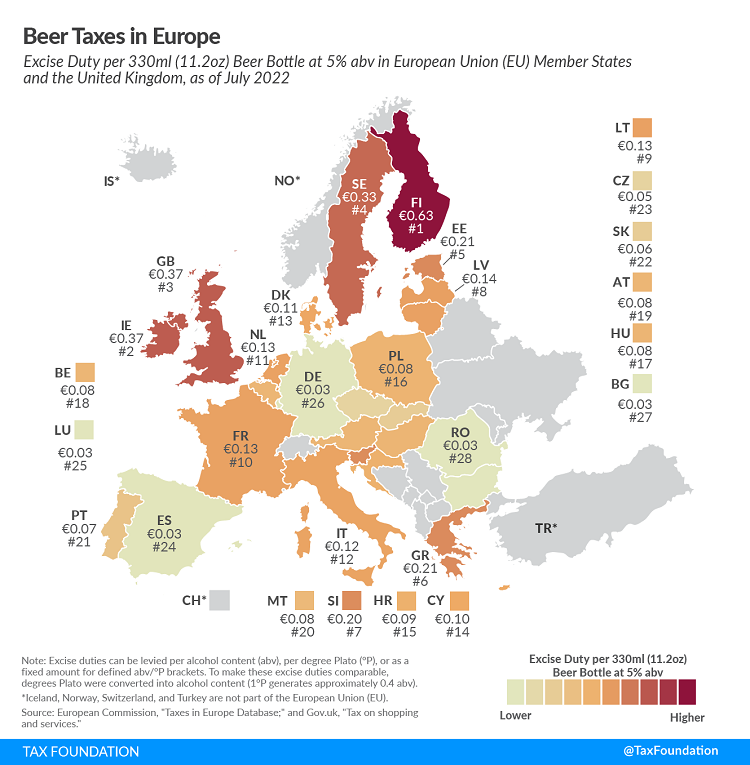 Checking Out of Hotel California - Naomita Yadav, Tax Notes. "Many practitioners have commented on the nuances of terminating California residence for individuals — but even if they accomplish that, taxpayers may be surprised to find they have not yet escaped California income taxes."

Cryptocurrency tax for expats - 1040 Abroad. "Next question, can we do a section 1031 exchange? Unfortunately, that’s not possible as the tax cuts and jobs act restricted 1031 exchanges of January 1st of 2018 to real property only, so you can’t do 1031."

July 1 marked the return of the Superfund chemical excise tax - National Association of Tax Professionals. "After a 26-year break, on July 1 the IRS will once again begin collecting a Superfund chemical excise tax imposed on a wide variety of commonly used chemicals that are manufactured or imported into the U.S. The tax was reinstated under the 2021 Infrastructure Investment and Jobs Act (IIJA) and could create compliance challenges for some businesses using the chemicals subject to the tax and may lead to increases in the prices U.S. businesses will pay for their chemicals."

Implementation Issues: An OECD Tax Reform Project Update - Stephanie Soong Johnston and David Stewart, Tax Notes Opinions. "The main things that the United States needs to do is reform its global intangible low-taxed income (GILTI) regime. The GILTI regime actually inspired those GlOBE rules in some ways, but some changes are needed so that the GILTI is more in line with the GloBE rules. The United States has to change the rate to 15 percent and also change the regime so that it applies on a jurisdictional rather than worldwide basis."

Under Code §882(c)(2), an untimely foreign corporation filer is not entitled to deductions and credits.  However, Treas. Reg. §1.882-4(a)(3)(ii) permits the filing deadline to be waived.  This practice unit explains the deadline waiver process.

The potential loss of deductions is an important reason for non-U.S. filers to stay current on U.S. tax reporting obligations.

Don't mix these holidays. Today is National Sleepy Head Day! - "This quirky Finnish tradition began in the medieval period to wash off the evil of laziness." But if you are feeling more perky, it's also Walk on Stilts Day.