One of our big questions going into this crucial month was whether Senate Republicans would stand behind Senate Minority Leader Mitch McConnell’s threat to tank USICA if Democrats pursued a reconciliation bill.

This matters for tax-curious readers for two reasons. First, USICA - a bill to provide money to the semicondutor industry - is one of the few bills that could include tax provisions before the elections. That is considered unlikely. Second, anything that holds up reconciliation, formerly known as Build Back Better, hinders the already-difficult process of getting its tax increases passed on a party-line vote in an evenly-divided Senate.

Back for more - Bernie Becker, Politico:

All in all, Democrats made some decent progress on their potential fiscal package during these last two weeks of recess — clinching an agreement on prescription drug reforms and perhaps coalescing behind a couple hundred billion dollars from expanding Obamacare’s net investment income tax.

But Democrats really need to get a move on now, given that the House has just three legislative weeks left before its scheduled August recess — and no one really seems to think it would be a good idea to let this slip into September.

The New York Times reported July 6 that Comey and McCabe, both of whom had been frequent objects of criticism from former President Trump, were subjected to intensive audits as part of the IRS’s National Research Program. That program studies representative samples of individuals and businesses as part of the agency’s measurement of the tax gap and for updating how it selects returns for audits.

The agency will brief the Senate Finance Committee on July 26 on its audit program, and members will be able to question and hear directly from Rettig, according to a statement from Senate Finance Committee Chair Ron Wyden, D-Ore. The session will be conducted behind closed doors, a Wyden spokesperson said. Rettig also will appear before the House Ways and Means Committee in a separate closed-door session, a committee aide confirmed.

Rettig's appearances before the panels follow Wednesday's New York Times report that the tax returns of Comey and McCabe were subjected to audits under the agency's National Research Program, and that it's rare for returns to be selected. Comey's 2017 return was chosen for audit, which he learned of in 2019, and McCabe's 2019 return was chosen in 2021, according to the report.

Were IRS Research Audits Used To Target Trump’s Enemies? Here’s Another Possible Explanation For Why Two Ex-FBI Officials Got Picked - Amber Gray-Fenner, Forbes. "Comey’s 2017 return was selected for an NRP audit in 2019. In 2017 he signed a seven-figure book deal and had other income from paid speaking engagements. Those types of income are typically reported on Schedule C and, for book royalties, on Schedule E. McCabe’s 2019 return was selected for an NRP audit in 2021. After he left the FBI he became an on-air law enforcement analyst for CNN, which could have resulted in him being considered a self-employed consultant (Schedule C with a 1099) rather than a CNN employee (W2)."

One of the budget bills, H.B. 1342, was signed by Wolf July 8. Among other changes to the state tax code, the bill will reduce the corporate net income tax rate from 9.99 percent to 8.99 percent beginning January 1, 2023, and phase it down by half a percentage point annually until it reaches 4.99 percent in 2031; transition the state to market-based sourcing for sales of some intangibles; and codify nexus rules for corporations without a physical presence in the state.

The bill also conforms to IRC section 179 to raise the state limit on business expense deductions from $25,000 to the federal cap of $1.08 million, and conforms to section 1031 to allow tax deferrals for gains resulting from like-kind exchanges of real property. Under previous law, those gains in Pennsylvania are taxable at the time of sale.

The 9.99% 2022 Pennsylvania corporation tax rate is the second highest in the U.S., behind only New Jersey, according to the Tax Foundation. Iowa and Minnesota are right behind for 2022 at 9.8%, though Iowa has enacted phased in rate cuts leading to a 5.5% flat corporation rate, contingent on corporate tax revenues.

The new rules, initially promised by mid-2022 as part of a multilateral deal negotiated under the auspices of the Organization for Economic Cooperation and Development, won’t be completed until next year. After that, countries will need to vote to approve them. The delay increases the risk that some governments will lose patience with the process and press ahead with their own national taxes on the big U.S.-based technology companies that are the prime targets of the effort.

Nearly 140 nations agreed last year to an overhaul of the rules governing the taxation of profits made by companies that operate in more than one country. The overhaul is intended to allow governments to tax digital businesses that profit off consumers around the world but aren’t physically present there to sell their services, in contrast to manufacturing or retail businesses, for example. That economic shift—and the corresponding loss of corporate tax revenue—has caused frustration in national capitals, particularly in Europe.

OECD’s Pillar 2 Won’t Be Finished Until Next Year - Renu Zaretsky, Daily Deduction. "The overhaul of global tax rules broadly agreed to last year by nearly 140 counties and promised by now, will now not be complete until the first half of next year. The plan would create a uniform system for countries to collect corporate tax on profits from sales in their jurisdictions. The delay by the Organization for Economic Cooperation and Development could complicate consideration of the proposal in the US since Congress may be controlled by Republicans in 2023."

An amendment to the National Defense Authorization Act offered by a high-ranking House Democrat would provide a long-sought-after same-country exception from the Foreign Account Tax Compliance Act, though questions remain on practical implementation.

This would remove reporting requirements under the Foreign Account Tax Compliance Act for Americans abroad for banks in a foreign country where the American resides. These requirements have made it difficult for many U.S. citizens residing abroad to commit personal finance.

Charles M. Bruce, counsel for American Citizens Abroad, said that his organization was in strong support of and grateful for the amendment.

“A same-country exemption was inches away, in late 2016, from being put in the FATCA regulations but exasperatingly fell out,” Bruce said. “The problem is ‘lockout’ of Americans abroad from their local foreign financial institutions — banks and the like. This does what should've been done years ago. There should be no controversy here.”

IRS fingerprinting delays could lead to data exposure - Michael Cohn, Accounting Today: "However, the TIGTA report cautions that the faster hiring process could put taxpayer information at risk. 'New employees who are given access to sensitive information and have not been fingerprinted or have not had their employment eligibility documents physically inspected could result in the exposure of sensitive information,' it said."

Gas Taxes in Europe - Adam Hoffer, Tax Foundation. "The European Union requires EU countries to levy a minimum excise duty of €0.36 per liter (US $1.55 per gallon) on gasoline (petrol). Today’s map shows that only Bulgaria, Hungary, and Poland stick to the minimum fuel tax rate, while all other EU countries opt to levy higher excise duties on gas."

The US Federal gas tax is 18 cents per gallon, with states tacking on additional taxes ranging from 14.98 cents to 66.98 cents. 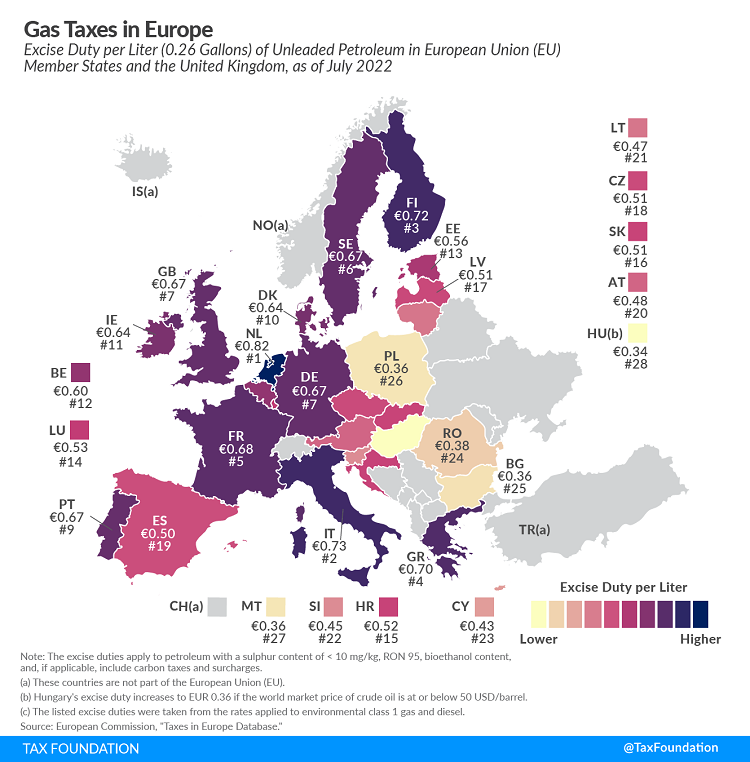 Some home rentals are tax-free federally, but don't overlook state and local levies - Kay Bell, Don't Mess With Taxes. "The limited, 14-days-or-less rental period applies to second homes, too. But if you personally use your vacation home during the year and also rent it out for more than the federal tax-free two-week period, things get a bit trickier."

Physician Denied Relief for Penalties Related to Failure to File Returns or Timely Pay Tax Due - Ed Zollars, Current Federal Tax Developments. In which an Iowa doctor fails to convince the Tax Court she had reasonable cause for not filing her returns or paying taxes on time.

Using Farm Income Averaging to Deal with Economic Uncertainty and Resulting Income Fluctuations - Roger McEowen, Agricultural Law and Taxation Blog. "Farm income averaging is a tax management tool that farmers and ranchers can elect after the tax year ends to spread a certain amount of income from the year to be spread over a three-year period.  The technique can be used to prevent a farmer or rancher from being pushed into a higher tax bracket in a high-income year, such as 2022 will likely be for many farmers."

Here’s What Businesses Should Know Before Leaving California - Sergio Broholm, Bloomberg. "Businesses have long chosen to headquarter in California over other states. But since 2018, many large corporations have moved their headquarters out of state, including Tesla, Oracle, and Nestle. The change is undoubtedly driven, at least in part, by the state’s expensive cost of living, high taxes, and complex regulatory environment."

Adverse Rulings from the IRS Exempt Organizations Division. How Can Your Organization Learn from Others’ Mistakes? - Cory Halliburton, Freeman Law. "Due care should be taken with applications for tax exemption. The exemption, if available, is a privilege, not a right, and the IRS is not shy to deny that privilege when appropriate based on the organization or operations of the applying entity."

Related - How to Protect your Tax-Exempt Status.

Why Exclude Some Low Income Individuals From New California Families Tax Refund? - Annette Nellen, 21st Century Taxation. "The reason why some low income individuals will not get a refund even though they could benefit from this refundable credit for the reasons given and even more so than people with income high enough to have had a 2020 filing obligation is that the individual had to have filed a 2020 California return by October 15, 2021 (the extended due date). Well, AB 192 was signed on June 30, 2022 so it is too late to file for 2020."

Boris Johnson’s Big Win? He Beat IRS - Robert Wood, Forbes. "Before his PM victory, Mr. Johnson was Mayor of London, then foreign secretary. Yet he was famously an American citizen too, born in the U.S. and leaving at age five. That meant dealing with the IRS every year, on top of British taxes."

One Strong Global Minimum Tax Beats Two Weak Ones - Thornton Matheson, TaxVox. "The US is currently the only country in the world with a global minimum tax, and its GILTI regime inspired the Pillar 2 blueprint.  Pillar 2 now calls for tighter restrictions to stop the global “race to the bottom.” Aligning GILTI with Pillar 2 would keep the US at the forefront of international tax innovation and help end the downward trend in corporate taxation."

Don't Complain To IRS If They Are Slow To Process Your Fraudulent Refund Claim - Peter Reilly, Forbes.

It turned out that Joe was supporting the family by preparing returns in which he overstated withholding - dramatically.

What takes the cake in absurd is how the IRS finally caught onto Joe. Joe filed the 2009 return claiming a refund of $108,253. The refund did not issue quickly enough, so Joe contacted a customer service office. They connected him to the Taxpayer Advocate Service which opened a case to investigate the status of the refund. That caught the attention of the Examination which looked at the 2006, 2007 and 2008. In short order Examinations reversed the overstated withholdings and issued assessments.

Ponder bovines. Today is Cow Appreciation Day! But if that's not your thing, it is also National Pecan Pie Day.