It represents the first formal step in reviving a new reconciliation bill for possible floor action. And Schumer is taking a risk by making this official. The top issue for Senate Democrats and the White House this month now becomes whether they can get a deal. So there’s a lot riding on this for Schumer, Manchin and President Joe Biden.

The other two major items in any Democratic reconciliation package – climate and energy provisions, plus tax reform – are still being negotiated by Schumer and Manchin. The move today by Schumer to start the Byrd Bath doesn’t mean there will be final agreement. But reconciliation is clearly back in play. And this will drive everything on Capitol Hill over the next few weeks.

The SAFE Banking Act would allow access to banking services for cannabis businesses operating in states where marijuana sales are legal by exempting financial institutions from federal investigation or prosecution for providing those services. Supporters of the act have cast it in part as a public safety measure, arguing that by allowing cannabis businesses to access financial services and rely less on cash, robberies would be reduced.

Because so many cannabis businesses operate on a cash-only basis, they pay federal and state taxes in cash and only at designated offices where the tax authorities can accept it — roadblocks that most other legal businesses don’t face. Treasury Secretary Janet Yellen has said legislation like the SAFE Banking Act would make it easier for the IRS to collect taxes from cannabis businesses.

First, a narrow set of tariffs will be lifted, likely duties on consumer goods like bicycles. Which duties will be included in the initial tariff relief are still under discussion, but two sources said the value is expected to be relatively small — $10 billion worth of imports out of roughly $370 billion imposed by Trump is one value under consideration.

At the same time, the administration is expected to announce that the U.S. Trade Representative will open a new exclusion process for companies to win exemptions from the tariffs on China.

The article says that the plan is a victory for factions "who have pushed for most of the Trump-era tariffs to stay in place."

According to a July 3 New York Times article, Ian Hosang obtained exempt status for 76 nonprofits he started by stealing the names of legitimate charities and giving his organizations phony locations. The district attorney in Brooklyn, New York, alleges that Hosang stole roughly $152,000 in charitable donations flowing through 23 of his nonprofits, the Times reported.

Hosang, previously found guilty of stock market fraud, has pleaded not guilty to charges of grand larceny, identity theft, and conducting a scheme to defraud, the Times said.

The article quotes tax pros as blaming Form 1023-Z, Streamlined Application for Recognition of Exemption Under Section 501(c)(3) of the Internal Revenue Code, which is used to obtain tax exemption for small charities. They say that the form makes it too easy to set up fraudulent charities.

Do You Need to Electronically Sign a Tax Form That Cannot Be E-Filed? Make it Digital. - Erin Collins, NTA Blog:

Various document processing platforms, like Microsoft Word, Adobe, and DocuSign, offer digital signature technology for its users. Tax forms may be opened on these platforms to input a digital signature. While from the signer’s perspective the implementation of this technology may look different across the platforms, what remains constant is that the digital signature provides an additional layer of security to a document and creates a digital audit trail. Digital signatures can also facilitate more secure document exchanges between taxpayers and those submitting their forms to the IRS.

TAS continues to advocate for the expansion of e-signatures to all documents that require a signature and cannot be e-filed, providing taxpayers with the freedom to interact with their tax preparers remotely if that is their preferred method. The IRS continues to explore various options for extending electronic signature options but remains committed to balancing security and protection against identity theft and fraud. In my Annual Report to Congress, I advocated for the IRS to develop and implement enhanced electronic signature tools to not only meet industry security standards, but also provide taxpayers with more accessible and secure service.

Missouri Governor Vetoes One-Time Tax Credit, Calls for Special Session - Lauren Loricchio, Tax Notes ($): "Gov. Mike Parson (R) on July 1 vetoed H.B. 2090, which would have provided a one-time nonrefundable tax credit of up to $500 for individuals earning less than $150,000 annually and up to $1,000 for joint filers who earn less than $300,000 each year. The tax credits, passed by lawmakers as part of the state's fiscal 2023 budget, were called poorly conceived by opponents."

Vapor Taxes by State, 2022 - Adam Hoffer, Tax Policy Blog. "Today’s map looks at the design of excise taxes for vaping and tobacco alternatives, which is important in the pursuit of harm reduction from smoking. Higher vapor taxes on products such as E-cigarettes could encourage vapors to go back to smoking cigarettes and will discourage cigarette smokers from switching to vaping products." 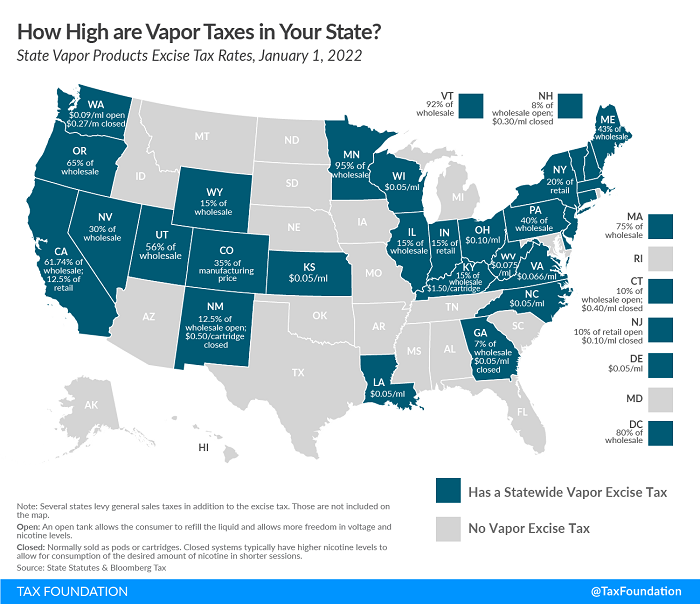 July's tax moves involve mileage deduction changes, disaster prep, and tax notices - Kay Bell, Don't Mess With Taxes. "2. Don't ignore IRS notices. By now, we all know that the IRS didn't escape the COVID-19 pandemic havoc we all have (and still are to some degree) endured. Coronavirus related closures created astounding tax paperwork backlogs within the agency, and that has produced additional problems for many taxpayers."

An Unusual Tax Court Hobby Loss Opinion - Peter Reilly, Forbes. "...the manner in which you carry on the business is the factor that is easiest to do something about. And the things that you need to do like keeping accurate books and records tend to make life easier."

Taxpayer Had Enough of a Guarantee Business Would Be Able to Keep Funds Received That The Amounts Immediately Constituted Income - Ed Zollars, Current Federal Tax Developments. "An IRS special agent approached Mr. VanDemark posing as a businessman interested in buying his business. Not surprisingly, Mr. VanDemark felt he needed to tell the potential buyer that there was a bit of 'off book' activity and this business was truly more profitable than it would appear from the tax returns and his Quickbooks ledger."

What is the Character of Land Sale Gain? - Roger McEowen, Agricultural Law and Taxation Blog. "In the vast majority of situations when a farmer or rancher sells farmland, the sale will qualify for capital gain treatment.  However, there can be situations where ordinary income treatment can be the result."

Tax Court Rejects Partnership's Attempt to Treat Land Sold at a Loss as Inventory - Parker Tax Pro Library. "The court found that the partnership initially acquired and subsequently held the property for investment and that no change in purpose occurred when the partnership distributed the property to the taxpayer."

Foreign Accounts and Assets: How I Approach a “Streamlined” Tax Filing Nowadays - Virginia La Torre Jeker, Virginia - US Tax Talk. "The Internal Revenue Service (IRS) Streamlined Procedures of 2014 are still available for taxpayers with tax noncompliance issues that involve unreported income from a foreign financial asset. The Procedures can help taxpayers who have not filed certain information returns associated with the foreign asset (e.g., Form 8938; Form 5471 pertaining to ownership in a foreign corporation; Form 8865 pertaining to ownership of an interest in a foreign partnership) as well as those who have not filed FBARs."

Arizona HB 2204 proposes unusual tax breaks for crypto - Annette Nellen, 21st Century Taxation. "This bill adds new reductions to Arizona gross income for the value of virtual currency and non-fungible tokens (NFTs) received from an airdrop. Apparently though any future appreciation would not be subtracted from gross income. While not clear, I assume these tax-free airdrops will have zero basis for Arizona and a gain when disposed of."

Taxes, Religion, And Education: How Much Are We Willing to Pay for Choice? - Renu Zaretsky, TaxVox. "Regardless of what people think about the separation of church and state or the importance of religious choice in public education, their tax dollars may soon fund religious education throughout the country."

Are Tesla Drivers Tax Dodgers? - Robert Goulder, Tax Notes Opinions. "If the federal gas tax is meant to function as a road use fee, the nontaxation of EVs is a glaring loophole — and one that grows wider with each passing year, with EVs accounting for an increasing share of new car sales."

Personal Bookkeeping Trips Up Tax Attorney - Erin McManus, Tax Notes ($). The article says the IRS alleges some sloppy bookkeeping from the attorney and her husband. That isn't particularly unusual. This, however, bothers me:

Finally, the IRS said the couple failed to file their 2015 return. Dilworth said in a May 2021 supplemental memorandum that she mailed the return along with their New York and New Jersey returns but didn’t pay for proof of receipt. The couple maintains that the return must have been lost in the mail, because they used information from their federal return to complete their state returns, which were received by the state tax agencies.

That's just an unforced error. When you file, do it right. E-filing is best, as you get instant proof of receipt, and it won't get "lost in the mail." If you have to use paper, spring the extra $3 or so for Certified Mail, Return Receipt Requested. It's a lot cheaper than fighting the IRS in Tax Court.

Tax Court to Doctor: If You Can Work, You Can File - Chandra Wallace, Tax Notes ($). "A physician able to continue practicing medicine wasn’t incapable of filing her federal tax returns or making timely tax payments, and thus wasn’t excused from paying penalties, the Tax Court held."

Petitioner, a physician, resided in Iowa when she timely filed her petition. During 2017 she worked as an independent contractor for AB Staffing Solutions. She received income that was documented by third-party reports.

Petitioner testified that she worked fewer hours in 2018 and 2019; however, she was still able to function as a physician. She further testified that she thought she would have a refund from prior years that could be used towards her 2017 tax liability. Petitioner did not show reasonable cause and is liable for the addition to tax pursuant to section 6651(a)(1) for the year in issue.

The Moral? If you can make it to work, you'd best file your returns.

Probably not a good holiday for an office event. Today is International Kissing Day. For a workplace celebration, best go with National Fried Chicken Day instead.