For lower-income families, the budget also includes $400 million to boost the state portion of the earned income tax credit to at least $255. That is for residents with no children; the EITC jumps significantly with each child, up to a three-child family.

CA Strikes "Inflation Relief" Deal, 23 Million Taxpayers to Receive Checks - Rebekah Barton, TaxBuzz. "Individuals who earn up to $250,000 would receive $200, and joint filers with income of as much as $500,000 would receive $400. Households with dependents would receive an extra $200, making this income bracket eligible for a maximum of $600."

Biden Seeks to Shift Gas Tax Burden From Consumers to Producers - Alexander Rifaat, Tax Notes ($). "While the reception on Capitol Hill to a gas tax holiday has been largely lukewarm even within the president’s own party, there has been growing traction around a windfall profits tax."

Accounting Firm EY to Pay $100 Million for Ethics Exam Cheating - Mary Katherine Browne, Tax Notes ($): "From 2017 to 2021, nearly 50 employees at EY shared answer keys to CPA ethics exams. Along with sharing answers, employees also cheated on continuing professional education courses. While the firm conducted its own internal investigation and several employees knew about the cheating, EY failed to report the misconduct and materially misled the SEC when it began investigating the firm."

Shuttered Venue Operators Grant: What Your Nonprofit Needs to Know - Eide Bailly. "The SBA also outlines several non-allowable uses such as the purchase of real estate, payments of loans originated after February 15, 2020, investment or lending, and contributions/expenditures related to political parties."

In Rev. Proc. 2022-26, 2022-29 IRB 1, released June 28, the IRS outlined how importers, exporters, and other parties can receive a determination on whether a substance will be added or removed from the list of 121 taxable substances under section 4672(a).

The modified Superfund excise tax on chemicals and hazardous substances was resurrected in the Infrastructure Investment and Jobs Act (P.L. 117-58) in November 2021 after a 25-year slumber, with the aim of funding resources that respond to environmental threats.

Tax Burden on Labor in Europe - Daniel Bunn, Tax Policy Blog. "Belgium has the highest tax burden on labor, at 52.6 percent (also the highest of all OECD countries), followed by Germany and Austria, at 48.1 percent and 47.8, respectively. Meanwhile, Switzerland had the lowest tax burden, at 22.8 percent." 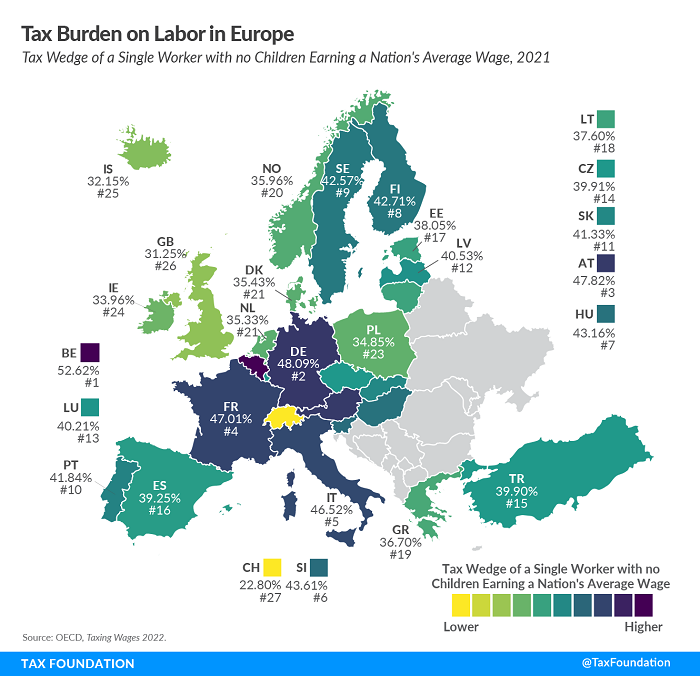 Senate Finance chair exploring excess profits tax on oil companies - Kay Bell, Don't Mess With Taxes. "'Exxon made more money than God this year,' Biden said in a June 10 address before Port of Los Angeles dockworkers and union representatives, but they are not using those profits to drill more."

Financial information for the Deity is not publicly disclosed.

Website Was a Trade or Business When Opened to the Public, Despite Earning No Income - Parker Tax Pro Library. "The Tax Court held that an information technology entrepreneur who started a business information website could deduct his payments to engineers and a marketing professional, and a portion of his expenses for internet and cell phone services, as of the time the website became available to the public, even though the website did not begin to earn revenue until several years later."

IRS Wants You to Extend Statute of Limitations, But Should You? - Michael Kramarz, Bloomberg. "If the IRS is conducting an audit and the statute is about to run out, it will usually solicit an extension—even for routine, mundane issues. While the taxpayer may have a natural urge to decline such a request, that’s not always the right move. Each taxpayer’s facts and circumstances must be considered when deciding whether to agree to an extension."

Supreme Court Gives Taxpayers In IRS Collections Cases A Win - Amber Gray-Fenner, Forbes. "The Tax Court has a long history of dismissing cases for lack of jurisdiction when petitions are mailed late."

The Advance Child Tax Credit: 2022 and Beyond - David Stewart, Marie Sapirie, and Elaine Maag, Tax Notes Opinions. "Along comes 2021 and it's a big revolution for the tax credit. The first thing that happens that catches a lot of headlines is the tax credit increases in size. The credit is now worth $3,600 if your child is under age six, or up to $3,000 if your child is ages 6 to 17. They added an additional year of eligibility, but really importantly, they've targeted additional resources at those very low-income children."

Planes, trains, and automobiles - however you travel, recordkeeping is everything. A west coast construction manager deducted $24,201 in "unreimbursed business expenses" on his 2016 1040. His tax work failed inspection yesterday in Tax Court.

Petitioner reported on Schedule A unreimbursed employee business expenses of $24,201 comprising vehicle expenses, parking fees, tolls and transportation, travel expenses while away from home overnight, and meals and entertainment expenses.

Longtime readers have figured out where this is going:

For expenses relating to passenger automobiles, a taxpayer must substantiate with adequate records or sufficient evidence corroborating his own statement (1) the amount of each separate expense using either actual costs or the standard mileage rate; (2) the mileage for each business use of the passenger automobile and the total mileage for all purposes during the taxable period; (3) the date of the business use; and (4) the business purpose of the use. See Treas. Reg. § 1.274-5(j)(2); Temp. Treas. Reg. § 1.274-5T(b)(6).

The mileage log that petitioner offered to substantiate the vehicle expenses that he reported on Schedule A does not satisfy the heightened requirements of section 274(d). In sum the mileage log is not reliable because it was not made contemporaneously with his purported trips and the log entries lack necessary information such as the location where petitioner started a particular trip, his precise destination, and the business purpose for the trip.

As the judge explained, the tax law has strict rules to deduct travel and meal expenses. Unless you can document the amount, timing, and business purpose of an expense with contemporaneous records, no deduction.

The moral: When you deduct travel, meal, or entertainment expenses, recordkeeping is everything, no matter how you get there.

According to his plea agreement and other court documents, from approximately December 26, 1995 to April 26, 2021, Defendant was a member of the Prince George’s County Police Department (PGPD). Members of the PGPD were allowed to work part-time outside employment in addition to their full-time duties, known as Secondary Law Enforcement Employment (SLEE). According to the plea agreement and court documents, from 2014 to 2021, Defendant used EFI and employed off-duty law enforcement officers to provide security services to apartment complexes and other businesses, primarily in Prince George’s and Montgomery Counties, to manage and operate his SLEE business.

Defendant admitted that he underreported a total of more than $1.3 million of EFI income on his 2014 through 2019 individual income tax returns. During that time frame, Defendant deposited checks payable to EFI into personal bank accounts or non-EFI bank accounts over which Defendant had signature authority. Defendant also created false business expenses to lower his tax due by writing checks to relatives and friends for purported services performed; and used business funds to purchase a boat, a car, and other items for his personal use. This underreported income resulted in a total tax loss to the government of $367,765.

No, you can't do that, officer.

My checkbook almost balances! Today is The National Day of Joy, celebrating "an ability to rejoice at all times and over the small things."