But several observers have since said the bill's tax breaks for low- to middle-income savers are paltry compared with those that would benefit the rich, such as the provision that would raise the required minimum distribution age for retirement plans and another that would increase the catch-up contribution limit from $6,500 to $10,000 for individuals aged 62 through 64.

According to Grassley, SECURE 2.0 won’t go to the floor until the end of the year as part of an extenders bill. And in the meantime, Ways and Means Democrats will be using the window to work on a long-postponed priority — namely, revamping and strengthening the Social Security system, committee member John B. Larson, D-Conn., said.

The House version of the SECURE Act passed 414-5, but House progressives are having buyers remorse.

Complaints Persist for Required Minimum Distribution Regs - Caitlin Mullaney, Tax Notes ($). "The proposed regs include a retroactive start date that applies to distributions beginning on January 1, 2022. For distributions in 2021, taxpayers would have to apply existing regulations while considering a good-faith, reasonable interpretation of the SECURE Act changes that the proposed regs addressed."

Pennsylvania has a Republican Senate but a Democratic Governor, and the article says the Governor's office did not comment.

Ohio Governor Approves SALT Cap Workaround - Benjamin Valdez, Tax Notes ($). "Under S.B. 246, signed by Gov. Mike DeWine (R) June 14, passthrough entities can elect to pay tax at the entity level at a rate of 5 percent for tax year 2022 and at 3 percent for tax years 2023 and beyond. Passthrough owners are allowed to claim a refundable credit against their income tax liability based on their share of the entity tax paid."

Washington Capital Gains Tax Repeal Initiative Is Dead - Paul Jones, Tax Notes ($). "The campaign behind Initiative Measure 1929, "Repeal the Capital Gains Income Tax," confirmed that it would no longer seek to qualify the initiative for the upcoming November election because it appears possible the tax will be defeated in court. The new levy was overturned by a state superior court in March for violating the state constitution’s prohibition on progressive income taxation, and its survival now depends on whether the Washington Supreme Court will take the state's appeal and reverse the ruling."

Alliantgroup’s ‘Nightmare’ Probe by IRS Is Only Just Beginning - Jonathan Curry, Tax Notes ($). Alliantgroup is the leading facilitator of research credits and a dominant firm in obtaining other tax benefits. From the story:

Agents from the Justice Department and the IRS Criminal Investigation division swept into the Houston office of tax consulting firm Alliantgroup on May 20, executing a court-authorized search warrant. Although the investigation could take years to play out, observers say that even the few facts of the case that are known so far portend a troubled future.

“It would be very rare for IRS CI to even get involved if there wasn't some kind of targeted information they were trying to obtain,” agreed Aaron M. Esman of Moore Tax Law Group LLC. Although CI regularly investigates smaller entities, “a raid in and of itself . . . is rather rare for an entity of this size,” he said. “This is not exactly a common scenario.”

Two former IRS commissioners have prominent positions in the firm.

4 Things to Know About the Global Tax Debate - Daniel Bunn and Garrett Watson, Tax Foundation. "The U.S. tax system does not perfectly parallel the way other countries tax business income. The U.S. has a large pass-through business sector that is subject to the individual income tax. In fact, more than half of business income in the United States is reported on individual tax returns. This sector has grown relative to C corporations over the past 30 years, making comparisons over time and between countries more challenging. After adjusting for pass-through business tax collections, business tax revenue remains within its historical range at about 3 percent of GDP in 2021." 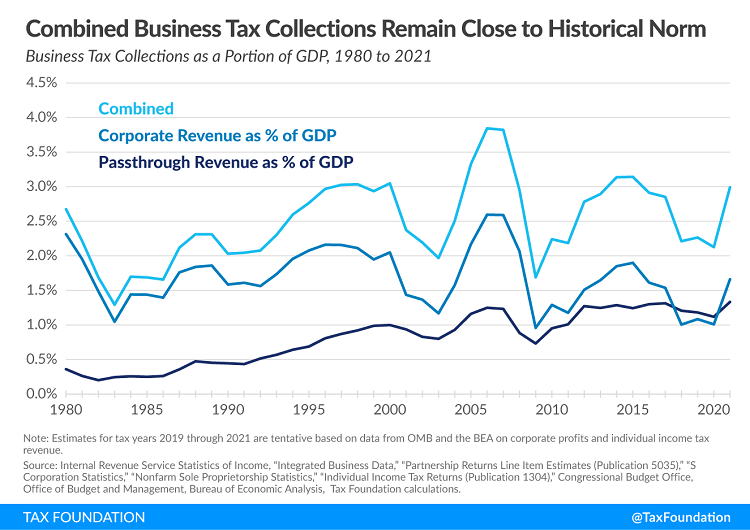 Figuring Your Tax Deduction After the IRS Boosts Mileage Rates - Kelly Phillips Erb, Bloomberg. "Beginning July 1, 2022, the standard mileage rate for business travel will be 62.5 cents per mile. The new rate for deductible medical expenses or moving expenses for active-duty members of the military will be 22 cents. The 14 cents per mile rate for charitable organizations did not change—it remains the same as it has since 1998, since it’s set by statute and not subject to periodic review."

House Ways & Means is latest to want answers about crypto in workplace retirement plans - Kay Bell, Don't Mess With Taxes. "Crypto's volatility and unproven long-term track record is why many advisers have warned against putting it, or putting just a little, into portfolios."

Former CEO Ruled Competent to Stand Trial In Largest U.S. Tax Evasion Case - Gordon McNamee, TaxBuzz. "Prosecutors had presented an array of evidence that showed that he had continued to work at a high capacity for his automotive dealership management software company following his indictment."

Escaping the USA, Exit Tax and Transfer Tax Regimes: Using the “Dual National” Exception - Virginia LaTorre Jeker, Virginia - US Tax Talk. "Timing is right because the weak market means the individual might escape “covered expatriate” (CE) status by not having enough wealth to meet the 'net worth' test of US$2 million (assuming no other test is triggered). If the individual is nonetheless a CE, the reduced wealth will mean a lower 'exit' tax is payable. My recent blog post sets out the expatriation rules in a nutshell, for those needing more information."

It’s Time To Let Go: Treasury Regulations Are Not Interpretative Rules - Kristin Hickman, Procedurally Taxing. "For the last 15 years, I have explained in articles, essays, and amicus briefs (e.g., here and here) why Treasury regulations simply do not qualify as interpretative rules for APA purposes under any contemporary standard, so I do not want to belabor the point here too much.  To summarize briefly, black-letter administrative law holds, and has held for decades now, that legislative rules are legally binding and interpretative rules are not.  No one seriously questions that all Treasury regulations are legally binding, whether issued under an express grant of rulemaking power in a particular Internal Revenue Code provision or the general rulemaking grant of 26 U.S.C. § 7805(b)."

McDonald’s Settles French Tax Case for $1.3 Billion - Mick Kostov and Sam Scechner, Wall Street Journal ($). "The tax case in France dates back more than half a decade. As early as 2014, French tax officials were investigating whether McDonald’s was diverting fees paid by its franchise restaurants to units in other countries—thereby reducing its taxable income in France."

But this seems almost bigger to me: "France is one of the countries where McDonald’s is most popular, counting some 1,500 restaurants, according to the company’s French website." Sacre Bleu!