If the chatter over Democrats trying to clinch a big fiscal package reached a fever pitch last weekend, then the temperature of the talks is decidedly more lukewarm right now.

So let’s see what happens this week: Sen. Joe Manchin (D-W.Va.) and Senate Majority Leader Chuck Schumer again discussed a potentially narrower version of what was once called the Build Back Better agenda last week, though neither said anything to suggest an agreement was close to being reached.

Congress May Prefer Cash to Charities Over Nonitemizer Deduction - Fred Stokeld, Tax Notes ($). The $300 charitable deduction for nonitemizers - $600 for couples - expired at the end of 2021. Congress may be reluctant to renew. Tax Notes quotes Andrew Grossman, Democratic Chief Counsel for the House Ways and Means Committee:

“These things cost money, and the question members always want to know is: ‘Are we getting bang for our buck here?’” Grossman said. "I think there is a question of to what degree and to what extent the provision represents a windfall benefit to taxpayers who otherwise would be giving anyway.”

Attorney Alexander L. Reid of Baker & Hostetler LLP said there was another reason why Congress might prefer cash grants at the American Institute of CPAs and the Chartered Institute of Management Accountants Not-for-Profit Industry Conference:

Always remember that at some point the other party will be in charge of what charities get money.

Several top auto-industry executives are urging lawmakers to lift a cap on the number of electric vehicles a car company can sell before their models are no longer eligible for a $7,500 tax credit.

Some EV models are no longer eligible for the purchase subsidy. Once a car company has sold 200,000 electrified vehicles, the credit begins to phase out and eventually lapses altogether. Both GM and Tesla Inc. have hit the cap, and Toyota said it expects to hit it this summer. Ford is also approaching the limit, having sold 160,000 electrified vehicles to date.

NEC Director Brian Deese said he was optimistic the United States would move forward enacting a landmark political agreement reached in October by the Group of 20 and the Organization for Economic Cooperation and Development, which envisions governments enacting rules allowing them to enforce a 15% minimum corporate tax rate globally and reallocate a share of corporate tax payments

Kimberly Clausing, a professor at the UCLA School of Law who just weeks ago left the Treasury, where she was deputy assistant secretary for tax analysis, said there's strong incentive for other countries to adopt it.

Both the 15% corporate minimum tax and the "Pillar 1" proposal to allow market countries to tax companies are big changes to international tax rules.

The case was filed in late 2019 in response to the enactment of an additional 1.2 percent business and occupation (gross receipts) tax on the Washington-derived receipts of members of consolidated financial institution groups that have over $1 billion in annual global net income.

Abusive Micro-Captive Insurance Arrangements: In abusive "micro-captive" structures, promoters, accountants, or wealth planners persuade owners of closely held entities to participate in schemes that lack many of the attributes of insurance.

For example, coverages may "insure" implausible risks, fail to match genuine business needs or duplicate the taxpayer's commercial coverages. The "premiums" paid under these arrangements are often excessive and are used to skirt the tax law.

Tenth Circuit Upholds Tax Court; Deals Significant Blow to Microcaptives - Parker Tax Pro Library. "The Tenth Circuit affirmed the Tax Court. The court derisively noted that many of the "insurance" policies were executed with what the court described as 'singular carelessness.'"

Carbon Taxes in Europe - Sean Bray, Tax Policy Blog: "In 1990, Finland was the world’s first country to introduce a carbon tax. Since then, 19 European countries have followed, implementing carbon taxes that range from less than €1 per metric ton of carbon emissions in Poland and Ukraine to more than €100 in Sweden, Liechtenstein, and Switzerland." 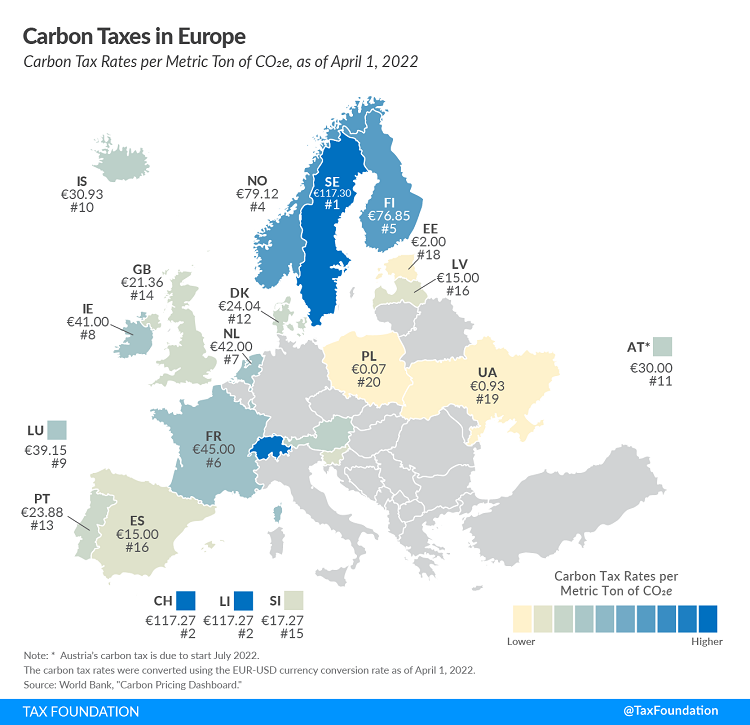 E-File or Mail - Shouldn't the answer always be e-file? - Annette Nellen, 21st Century Taxation. "But why can't e-filing be more widely available? Some schedules can't be e-filed meaning the entire return can't be e-filed. Not all amended returns can be e-filed."

Appropriations, Holidays, and Tax Cuts - Renu Zaretsky, Daily Deduction. "Pay attention to mail from the IRS this month. In February, the agency stopped mailing many letters and other correspondence as it tried to dig out from under its backlog of paper. But this month it resumed sending out CP14 notices that alert taxpayers of underpayments. The agency sends about 9 million of these notices every year."

Remote Work Arrangements Opens Taxation Traps for the Unwary - Mark Chaves, Bloomberg. "Depending on the functions performed, employee services rendered in-country may subject a foreign employer to taxation in that country, as the employee’s presence may give rise to a 'permanent establishment.' The concept of a taxable, permanent establishment exists in many countries and bilateral income tax treaties, and may subject a portion of an entity’s profits to taxation in a country where it has a permanent fixed presence."

Federal prosecutors charged Avenatti, 51, with wire fraud and bank fraud in March 2019 for allegedly embezzling a client’s money and defrauding a bank with phony tax returns to obtain loans.

Avenatti first rose to fame when he represented adult-film actress Stormy Daniels in her defamation suit against former President Trump.

Mr. Avenatti briefly was touted as a potential presidential candidate. You can still buy the T-shirt.

Breaking: The Government Can Tax Wages. OK, this isn't really news over the last 109 years or so, but sometimes news travels slowly. Judge Lauber helped spread the news in a Tax Court opinion issued yesterday:

In their Petitions the only error that petitioners assigned to the notices of deficiency is that the IRS erroneously included in their gross income the wages that petitioner husband earned from his employment as a radiologist...

Petitioners' central argument, ramified in various ways, is that wages received by U.S. citizens from employment in the United States are not subject to Federal income tax. This is a time-worn tax-protester argument, and it has never been accepted by any court.

Judge Lauber questions the thoroughness of the taxpayers' internet research into the tax law (my emphasis):

Petitioner husband is a well-educated medical professional. Although he (like most people) would prefer not to pay income tax, it is obvious that the U.S. Government is funded principally by taxes levied on wages, salaries, and other forms of compensation. If these taxes were really unconstitutional, one might have expected some court to have perceived this deficiency during the last 100 years. Lacking any judicial support for their position, petitioners cut and pasted reams of legal gibberish from tax-protester websites. The most casual internet search would have led them to online sources establishing the frivolous nature of these arguments.

The Moral: Wages are taxable income. As someone on the internet once said, do your research.

Be Careful. It's National Forklift Safety Day! If that goes badly, it's also National Call Your Doctor Day.