Sinema and Manchin were holdouts to earlier versions of the reconciliation measure. She came to generally support the Senate framework, but only after her objections trimmed the bill from $3.5 trillion to $2 trillion and tax rate increases were replaced with other revenue raisers.

Sinema aides declined to comment. But sources speaking on condition of anonymity said the passage of time may not have increased Sinema’s fondness for the bill and she may have lingering concerns with some of the specific language.

Senator Manchin has never been the obstacle to tax increases. The real obstacle hasn't been talked about much lately, but Senator Sinema is still there.

House Ways and Means Committee ranking member Kevin Brady, R-Texas, says conferees on the China competition bill are “nowhere close” to agreeing on whether to include a tax section in the bill.

There is perhaps broader support for another tax measure — the retroactive repeal of five-year amortization of research and development expenses, which went into effect in 2022 because of a provision in the Tax Cuts and Jobs Act.

This trade bill is the only likely vehicle for repeal of research credit amortization before this summer. Prospects for early passage don't look great.

Around 1,000 amendments to the Securing a Strong Retirement Act of 2022 (H.R. 2954) have been filed by Senate Finance Committee members and are being worked through by committee staff, according to Chair Ron Wyden, D-Ore.

Making the savers credit refundable and expanding its eligibility to couples earning up to $65,000, as proposed in the Encouraging Americans to Save Act (S. 2452), is “right at the top of my list,” Wyden said.

The Savers Credit currently is a non-refundable credit available to taxpayers contributing to IRAs or 401(k)-type plans. It phases out at $68,000 of AGI for joint filers and at $34,000 for single filers.

Chief financial officers of major U.S. companies urged the U.S. Treasury Department to rethink final foreign tax credit regulations, contending the rules could disallow taxes that have been creditable for over a century, marking a "radical departure" from established law.

A group of 28 CFOs from large U.S. companies, including Coca-Cola Co. and Verizon Communications, sent a letter Friday to Treasury voicing what the financial officers viewed as "serious concerns" about final foreign tax credit regulations that were issued in late December. Treasury should modify the rules and issue revised regulations in proposed form, according to the CFOs, who echoed concerns raised by business groups that said the rules cover offshore tax measures that have been creditable for many years.

CFOs Express ‘Serious Concerns’ About Changes to Foreign Tax Credits In Letter to Yellen - Jennifer Williams-Alvarez, Wall Street Journal ($). "Foreign tax credits are meant to ensure that corporate income isn’t taxed twice by different governments, the idea being that companies should compete in foreign markets without the worry of double taxation, said Brian Jenn, a partner at law firm McDermott Will & Emery."

Colorado Governor Signs Loan Program, Property Tax Bills - Emily Hollingsworth, TaxNotes ($). "Polis on June 2 signed H.B. 1223, which creates a tax exemption for mobile homes and manufactured homes with actual value of $28,000 or less. The bill also eliminates the requirement that a county treasurer print a notice in a newspaper when a mobile home is to be sold because of delinquent taxes if a warrant was delivered to the owner of the home or to the owner’s agent, and if the treasurer lists the notice of sale on the treasurer’s website."

Colo. Gives Tax Breaks For Heat Pumps, Building Materials - Sanjay Talwani, Law360 Tax Authority ($). "S.B. 51, which the Democratic (sic) Polis signed into law Thursday, exempts air-source and ground-source heat pumps, heat pump water systems and residential storage systems from sales and use taxes from 2023 through 2032. It also creates refundable income tax credits for the purchase of the heat pumps, energy storage systems and related electrical panel upgrades, to be granted to the installer of such systems."

Stuck in the Senate - Alan Rappeport, New York Times. "If both the United States and Europe cannot manage to comply with the agreement, the global deal is likely to unravel. That would mean a continuation of a hodgepodge of tax rates and related tariff fights around the world."

Chicago Pol In Corruption Case Ordered To 'Tell It To A Jury' - Celeste Bott, Law360 Tax Authority ($). "The ruling is a sweeping win for the federal government, which first accused Burke in early 2019 of using his position as an alderman to attempt to extort tax business for his personal law firm, Klafter & Burke."

Does Your State Have a Gross Receipts Tax? - Janelle Fritts, Tax Policy Blog. "Today’s map looks at which states levy a gross receipts tax, which is often considered one of the most economically damaging taxes. Shifting from state gross receipts taxes would represent a pro-growth change to make tax codes friendlier to businesses and consumers alike, which is especially necessary in an increasingly mobile economy." 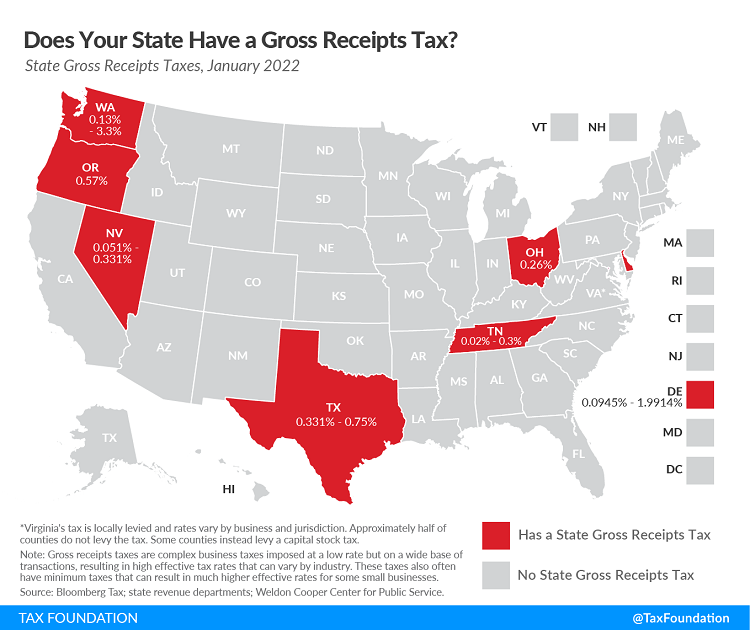 House bill would increase earnings limit for some working Social Security beneficiaries - Kay Bell Don't Mess With Taxes. "If you are younger than full retirement age and earn more than the yearly earnings limit, your benefits payment could be cut $1 for every $2 you earn above the annual limit. For 2022, that limit is $19,560. That's $1,630 a month."

Lessons From Gene Bicknell's Victory Over Kansas In Domicile Dispute - Peter Reilly, Forbes. "When thinking about what your state of residence is for income tax purposes, there is a tendency to focus on things like driver's license, voter registration and counting days. Don't get me wrong. These basic sort of things can be very important, but they may not be determinative. You will generally be considered a resident of the state where you have your domicile. And domicile can sometimes seem like an almost mystical concept. It is the place that you consider to be your permanent home, but there is an odd point."

AICPA Letter Gives Recommendation on Guidance on Upcoming TCJA Requirement to Amortize Rather Than Expense R&D Expenses - Ed Zollars, Current Federal Tax Developments. "The expected repeal has been introduced, but it was part of the Build Back Better Act which has stalled in Congress.  For now, backers of the repeal have not been able to attach the provisions to a 'must pass' bill, nor have they succeeded in getting both chambers to consider a 'clean' bill."

IRS Webpage Addresses Tax Rules for Employer-Provided Parking - Thomson Reuters Tax & Accounting. "The dollar amount of qualified parking expenses that may be excluded from an employee’s gross income cannot exceed a statutory maximum, which is subject to annual cost-of-living adjustments. (For 2022, the maximum is $280 per month—see our Checkpoint article.)"

Carbon Capture - It's Not Just for Giants. - Mark Rogers, Eide Bailly. "Congress in 2018 expanded the credit to cover both Carbon Oxide and Carbon Dioxide. The 2018 changes also lowered some thresholds for the amount of carbon to be captured. Most importantly, the 2018 changes eliminated a cap on the amount of credits available."

Court Awards Damages When IRS Tried To Collect Following Discharge: Pandemic No Excuse - Leslie Book, Procedurally Taxing. "Prior to the bankruptcy, the taxpayers had entered into an installment agreement, but as per the Chapter 13 case, they terminated the agreement and paid the debts through their repayment plan. The taxpayers/debtors received a discharge on September 24, 2019. As an unsecured creditor, the IRS received a 22% distribution on the $6,393.80 unsecured portion of the claim."

The Booming Economy, Not The 2017 Tax Act, Is Fueling Corporate Tax Receipts - William Gale, Kyle Pomerleau, and Steven Rosenthal, TaxVox. "Corporate tax revenues boomed in 2021 and some supporters of the 2017 Tax Cuts and Jobs Act argue that the big tax reductions in the bill deserve the credit (Wall Street Journal, Goodspeed and Hassett). But there is a much better explanation: Last year’s strong economic growth, high inflation, and pandemic-related relief legislation increased both corporate profits and the taxes business paid."

In February 2021 the U.S. District Court for the Western District of Pennsylvania upheld the more than $300,000 in FBAR penalties imposed on Collins for his 2007 and 2008 willful reporting failures for his accounts in Canada, France, and Switzerland. The district court held that the government applied reasoned decision-making in assessing the penalties.

On appeal, Collins argued that the district court erred by failing to consider  that neither he, nor his accountant, nor his lawyer thought he owed any tax, or that he paid his passive foreign investment company tax. He also argued that his accountant didn't know of the FBAR requirement. The appellate court was unconvinced, pointing to Collins’s checking 'no' to Schedule B’s question of whether he had foreign accounts.

The FBAR is the Form 114 Report of Foreign Bank and Financial Accounts. Publication 5559 says foreign financial accounts can include:

• Bank accounts such as savings and checking accounts, and time deposits,
• Securities accounts, such as brokerage accounts, securities derivatives
accounts, or other financial instruments accounts;
• Commodity futures or options accounts;
• Insurance or annuity policies with a cash value (such as a whole life
insurance policy);
• Mutual funds or similar pooled funds (i.e. a fund available to the public with
a regular net asset value determination and regular redemptions), and;
• Any other accounts maintained in a foreign financial institution or with a
person performing the services of a financial institution

The due date for reporting these accounts for 2022 is October 15.