Although TIGTA generally gave the IRS high marks for its administration of the recovery rebate credits — it estimated that the agency was more than 99 percent accurate in calculating the allowable credits for over 26 million tax returns — the watchdog still identified hundreds of thousands of potential errors, most of which the IRS doesn’t plan to directly address.

The IRS has overseen the distribution of three rounds of recovery credits since 2020, totaling hundreds of billions of dollars in relief for taxpayers in response to the COVID-19 pandemic. Most of it came in the form of economic impact payments (EIPs) via direct deposit or checks. Eligible taxpayers who didn’t receive some or all of their EIPs could claim the money on their tax returns as refundable credits, reduced by the amount of any EIPs received.

IRS sent over $800M in potentially improper recovery rebate payments - Accounting Today. "The report, from the Treasury Inspector General for Tax Administration, noted that $79.8 million in Recovery Rebate Credits actually should have been paid to eligible individuals, but $818.5 million was paid to ineligible individuals. Nevertheless, the IRS declined to review nearly $598 million of the improper payments and take the actions needed to recover them. The IRS also told TIGTA it has no plans to further help approximately 10 million potentially eligible individuals receive their payments."

Punchbowl News on the current environment for tax increases:

Yes, Sen. Joe Manchin (D-W-Va.) is still saying he wants to pass a party-line package that would raise taxes on the wealthy, reduce the deficit, lower prescription drug prices and address energy and climate policies. And yes, that would give many vulnerable Democrats a strong rebuttal to Republican attacks on the economy.

Yet let’s be real here. Democrats are on the verge of likely losing one, maybe both, chambers of Congress, and with it, the control of Washington they’ve had since January 2021. Even with that reality staring them in the face, the party is attacking each other over primaries and struggling to get basic messaging bills passed. So a big package of significant tax, drug and climate policies coming together in the next few months? We’re skeptical.

Instead, Democrats are once again pushing back the target date for getting a deal with Manchin. They now point to the start of the August recess as the new deadline, arguing that gives them most of August to draft legislation and the month of September to pass it on the floor.

Such a timetable seems difficult to say the least.

None of this bodes well for less controversial tax provisions, like restoring immediate expensing of research costs.

It is also possible that the records left the IRS legally and disclosures happened after that. Under the law, IRS shares tax information with outside people and entities, including state officials, federal statistical agencies, academic researchers, prosecutors and Congress. They are bound by the same confidentiality laws, but the pool of potential suspects is quite broad and doesn’t just include IRS workers.

“If it were from the IRS, you would have known that by now,” said former IRS Commissioner John Koskinen. “Because it would have been a tour de force to get all that out and not leave any trace at all.”

The OECD has admitted that its groundbreaking international deal to increase the amount of tax paid by multinationals is falling significantly behind schedule and has no hope of being implemented before the US congressional elections in November.

Speaking at the World Economic Forum in Davos, Mathias Cormann, the OECD secretary-general, said there were “difficult discussions under way” and that the landmark agreement, which would ensure multinationals pay more tax where they make their sales, would come into force in 2024 at the earliest.

"At the earliest" doesn't exude optimism.

Yellen's global tax plan meets resistance abroad and at home - Fatima Hussein, AP via The Washington Post. "Broadly speaking, the global minimum tax deal is designed to subject large multinational firms to a 15% tax rate wherever they operate. The deal also provides for taxing part of the profits of the largest global companies in countries where they do business online but may have no physical presence."

Poland accused of hostage diplomacy as global tax debate scrapped - Jacob Hanke Vela, Politico. "EU finance ministers were set to debate the proposed law, which is designed to obliterate tax havens and ensure multinational firms pay their fair dues, at a meeting Tuesday. But late Monday, the French presidency of the Council of the EU removed that point from the agenda for the meeting, due to Warsaw’s persistent refusal to come on board."

Ranking Sales Taxes on the 2022 State Business Tax Climate Index - Janelle Fritts, Tax Policy Blog. "The sales tax rate and structure can make a state more or less attractive to businesses for two key reasons: (1) some states apply the sales tax to business inputs, which drives up the costs of production, and (2) as sales tax rates increase, consumers may cut back on purchases or move their shopping to lower-tax jurisdictions. The sales tax component accounts for 23.7 percent of each state’s overall Index score." 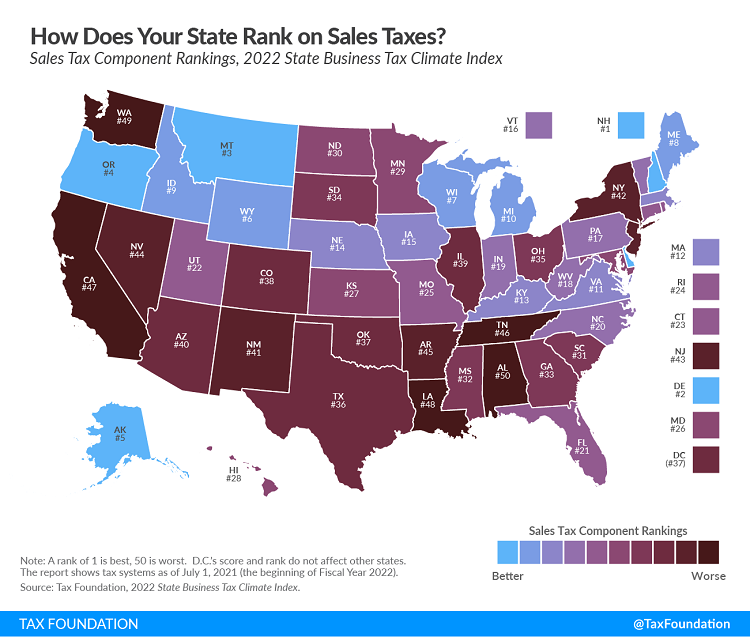 Among states with Eide Bailly offices, Montana has the best sales tax ranking, at #3.

Contributing to the IRS’s Paper Backlog - Russ Fox, Taxable Talk. "A client of ours has filed Form 2553 three times to elect S-Corporation status.  The first time, his attorney sent the form to the IRS.  The second time, my client mailed the form (right before the pandemic began).  The third time, I faxed the form (now 13 months ago).  As of today, the IRS has not processed the request."

You Received an IRS Notice CP2000, Now What? - Zachary Montgomery, Freeman Law. "Generally, a taxpayer receives the CP2000 from the IRS when his/her tax return does not match certain information reported by other third parties (e.g., employers, financial institutions, etc.). The IRS utilizes an automated system to compare the third-party information to a taxpayer’s tax return to identify potential discrepancies. After a discrepancy is identified and reviewed, the IRS issues the CP2000, proposing certain adjustments to a taxpayer’s income, deductions, credits, and/or payments."

Do Crypto Losses Trigger Tax Losses With IRS? - Robert Wood, Forbes. "Start with the proposition that each time you sell or exchange a cryptocurrency for cash, another cryptocurrency, or for goods or services, the transaction is considered a taxable event."

Sixth Circuit Rules Low Income Housing Tax Credit Refusal Rights Are Special - Peter Reilly, Forbes. "The program has been around long enough that we are already facing the thirty year point on some projects and there is a lot of concern about affordable units no longer being so affordable."

Kansas Supreme Court Rules for Former Owner of Mega Pizza Hut Franchisee - Amy Hodges, Tax Notes ($). "Bicknell sold NPC in 2006. The Kansas DOR reviewed Bicknell’s 2005 and 2006 tax returns and concluded that he was a Kansas resident for those years. The DOR issued a determination in 2010 that he owed roughly $42.54 million in Kansas income tax, interest, and penalties based on his sale of NPC."

Kansas tax officials lose multimillion-dollar residency case - Kay Bell, Don't Mess With Taxes. "During the course of the extended legal proceedings, Bicknell testified that he first decided to become a legal resident of Florida in 1999. Based on the advice of his accountants, he proceeded to obtain a Florida residence, register a vehicle and get a driver's license there, as well as register to vote in his new state. He did not, however, follow through on his accountants' final piece of residency status change, open a Sunshine State bank account."

In the case, Bicknell argued he was a Florida resident in 2006 when he sold NPC International, then the largest owner of Pizza Hut franchises in the world.

The Kansas Department of Revenue disagreed and in 2010 ultimately slapped him with a tax bill of over $40 million for both 2005 and 2006.

This case highlights an issue that is becoming common as wealthy taxpayers consider leaving states with high tax rates for sunnier tax climates. The taxpayers assertion that he had moved to Florida was complicated by retention of a home in Kansas, where his wife continued to live. The Kansas courts ultimately decided to reverse an appeals court and rule the taxpayer a Florida resident for the year at issue.

Taxpayers facing a similar move might want to consider a cleaner break with their high-tax state when they fly south. Nobody wants to have to litigate to a state supreme court.

From January 2016 to Sept. 3, 2019, Defendant and his conspirators, several of whom reside in Ghana, allegedly participated in an online romance scheme, defrauding victims in New Jersey and elsewhere. Defendant and the conspirators set up dating profiles on various dating websites, using fictitious or stolen identities and posing as United States military personnel who were stationed overseas. They contacted victims through the dating websites and then pretended to strike up a romantic relationship with them. After establishing virtual romantic relationships with victims on the online dating platforms and via email, the conspirators asked them for money, often for the purported purpose of paying to ship gold bars to the United States. Although the stories varied, most often Defendant and the conspirators claimed to be military personnel stationed in Syria who received, recovered, or were awarded gold bars. The conspirators told many victims that their money would be returned once the gold bars were received in the United States.

The things we do for love. Sometimes, though, it pays for lovers to be discreet:

While engaged in this fraud, Defendant purchased property in Ghana and posted photographs of himself on social media showing him with large amounts of cash, high-end cars, designer clothing and expensive jewelry.

The IRS has Facebook too. As hard as it may be to believe, the Defendant did not report this income on his 1040. He now has 168 months in federal prison to work on his romance game.

You'd be grounded without them. Today is Aviation Maintenance Technician Day!