But when the pandemic hit in 2020, Congress quickly looked to the IRS as one of the agencies to lead the federal government’s economic response. A series of pandemic relief bills directed the IRS to issue three rounds of stimulus checks, pay out the child tax credit on a monthly basis, and manage various new and expanded business tax perks.

All those additional responsibilities piled on top of the core work that was already overwhelming the IRS. The number of taxpayers grew about 19% since 2010, while the number of personnel at the agency shrunk about 17% over the same period, according to a January report from National Taxpayer Advocate Erin Collins.

Congress treats the tax law like a Swiss Army Knife of public policy. A knife the size of a railcar ceases to be very good at being a knife.

Chaotic IRS Filing Season Shows the Perils of Running Social Policy Through the Tax Code - Alex Muresianu and Garrett Watson, Tax Policy Blog. "In many ways the current chaos is the culmination of a problematic trend in fiscal policy. For the past few decades, policymakers have increasingly relied on the tax code to deliver major social spending initiatives, adding benefits administration to the IRS’s normal responsibilities as a revenue collection agency. At the same time, IRS capacity has not expanded enough to match its major new responsibilities. In the long term, the most stable solution is to move social spending out of the tax code and let the IRS focus its resources on revenue collection." 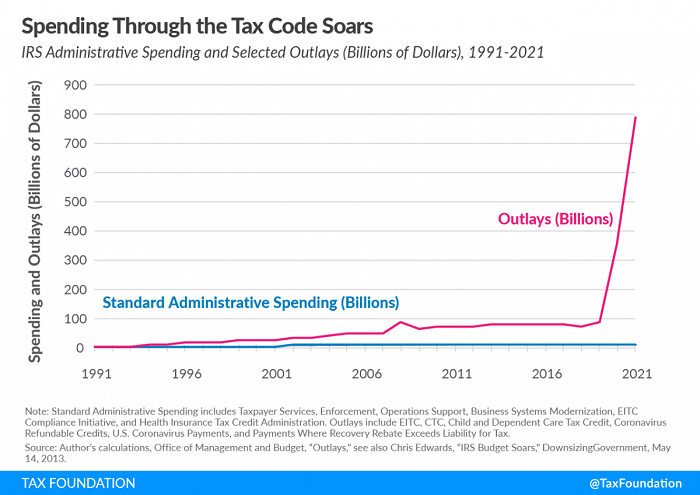 Taxpayers who owe and missed the April 18 filing deadline should file now to limit penalties and interest; not too late to claim the Child Tax Credit for 2021 - IRS:

Filing and paying as much as possible is key because the late-filing penalty and late-payment penalty add up quickly.

Even if a taxpayer can't afford to immediately pay the full amount of taxes owed, they should still file a tax return to reduce possible delayed filing penalties. The IRS offers a variety of options for taxpayers who owe the IRS but cannot afford to pay.

And you might be able to get out of penalties if you act quickly:

Taxpayers may qualify for penalty relief if they have filed and paid timely for the past three years and meet other important requirements, including paying or arranging to pay any tax due. For more information, see the first time penalty abatement page on IRS.gov.

The best time to have filed and paid is before the deadline. The second best time is right now.

As for groceries and gas, two areas where most people are feeling the effects of inflation, Pritzker's budget suspends the grocery tax for a year and freezes the gas tax for six months. For lower-income families, Illinois expands the state earned income tax credit, both by covering more families and increasing the amount of the credit from 18% of the federal credit to 20%. The change in the state EITC is permanent.

For businesses, the budget provides grants to small businesses and suspends licensing fees for restaurants and bars. It also renews the state's signature corporate tax credit, the Economic Development for a Growing Economy, or EDGE, credit through 2027. And it allows startup firms to be eligible for EDGE, which provides a nonrefundable income tax credit that is equal to 50% of the income tax withholdings for new jobs created in Illinois. The credit increases to 75% if the project meets certain criteria.

State pension plans in Illinois are only about 39 percent funded, the second worst funding rate nationally. Just two years ago, Illinois Governor Pritzker insisted the state needed a big tax increase, but he was rebuffed by voters.

Losing the special district would be a blow to Disney’s operations in Florida. The provision exempts the company from a host of regulations, and saves it tens of millions of dollars every year, according to a person familiar with the company’s finances who studied the issue over a decade ago.

In recent weeks, Mr. DeSantis has clashed with Disney over the company’s opposition to Florida’s Parental Rights in Education bill, which Mr. DeSantis signed into law last month.

Interview: IRS Commissioner Talks About the State of the Service - Cara Griffith and Charles Rettig, Tax Notes Opinions. "Ten years ago we would've been answering those phone calls. We would've been processing that mail in a more timely manner. Instead, we're somewhat caught on our heels."

Ireland Exempts Income Of Ukrainians Displaced By War - Matthew Guerry, Law360 Tax Authority ($). "Ireland will grant relief to those Ukrainians who would have performed their work in their home country if not for the war and who remain subject to Ukrainian income taxes for 2022, according to the brief. The country will also disregard for corporation tax purposes the presence of Ukrainian employers in Ireland that relocated because of the conflict, according to the government."

It appears the feeling is mutual.

Many S corporations, particularly those that involve agricultural businesses, have shareholders that perform substantial services for the corporation as officers and otherwise.  In fact, the services don’t have to be substantial.  Indeed, under a Treasury Regulation, the provision of more than minor services for remuneration makes the shareholder an “employee.” Once “employee” status is achieved, the IRS views either a low or non-existent salary to a shareholder who is also an officer/employee as an attempt to evade payroll taxes and, if a court determines that the IRS is correct, the penalty is 100 percent of the taxes owed.

This is one of the few areas the IRS is examining aggressively.

Internet Activities Protected From State Tax Under P.L. 86-272 - Wolters Kluwer Tax & Accounting. "A business must have nexus with a state for the state to tax it. P.L. 86-272 protects some sellers from having income tax nexus. To help promote uniform application of P.L. 86-272, the Multistate Tax Commission (MTC) adopted a Statement of Information Concerning Practices of Multistate Tax Commission and Supporting States Under Public Law 86-272. Recently, the MTC adopted a revised statement to address when P.L. 86-272 protections extend to internet activities."

Related: Is it war?

Don't dare deduct these expenses, but… - Kay Bell, Don't Mess With Taxes. "Keep track of your miles, too, if you're self-employed. Every legitimate, and documented, mile traveled to conduct your entrepreneurial enterprise counts. These business trip tallies go on the Schedule C or C-EZ filed by sole proprietors. So keep good records."

Inside the Black Box: An Underwriter’s Perspective on Tax Insurance - Jeffrey M. Lash, Justin Pierce Berutich, Bryce R. Pressentin, Kyle Reiter, and Sydney Lodge, Tax Notes ($). "The four standard exclusions in a tax insurance policy are generally quite narrow. The first applies to loss resulting from fraud or a materially inaccurate statement, act, or omission by the insured. The second applies to loss resulting from the insured taking a position on its return that is inconsistent with the insured tax position. The third applies if the insured settles with the tax authority without the insurer’s consent (with such consent not to be unreasonably withheld). And the fourth applies to the extent that a prospective change in law (that is, statute or regulation) adversely affects the insured tax position. Notably, loss arising as a result of a retroactive change in law — that is, a change in law that occurs after the policy is bound but applies to a prior tax period — is not typically excluded. Additional exclusions may apply depending on the facts and circumstances of a particular risk."

Losing Interest: Delayed IRS Assessments - Caleb Smith, Procedurally Taxing. "Over the last two years I cannot count the number of times I’ve had to give extraordinarily unsatisfying advice to my clients. That advice being, 'please wait.' Wait for the IRS to process your return. Wait for the refund to be issued. Wait for your Collection Due Process hearing."

How IRS Can Tax ‘Gifts’ and Impose Big Penalties - Robert Wood, Forbes. "But what about foreign gifts and inheritances? These rules aren’t as well publicized but the stakes are huge. If you receive a gift or inheritance, it isn’t income so you might think there's nothing to report. Besides, if there is a gift or estate tax, the person giving you the money or property pays it, not the recipient. However, if you’re concerned about proving that something was a gift or inheritance instead of income, you’d better file IRS Form 3520. Ditto if you are concerned about avoiding penalties."

Can Employers Pay Wages in Cryptocurrency? - Christopher Wood, Thomson Reuters Tax & Accounting. "The IRS representative provided a reference to a list of frequently asked questions (FAQs) on the subject. FAQ # 11 specifically says that remuneration paid in virtual currency to an employee in exchange for services constitutes wages for federal employment tax purposes."

On The Further Weaponization of the APA and Chevron Deference - Jack Townsend, Federal Tax Procedure. "I post this case on the Federal Tax Procedure Blog because, inspired by the Federalist Society and fellow travelers among some spectrum of scholars and judges, the APA is a hot topic in tax cases, which has prompted numerous offerings on the FTP Blog."

States Forecast Weaker Revenue Growth Ahead of Growing Uncertainties - Lucy Dadayan, TaxVox. "State revenue growth was strong in fiscal year 2021, despite widespread economic disruptions caused by the global pandemic. But it appears the current fiscal year 2022 (July-June for 46 of the 50 states) may end up with weaker revenue growth, and forecasters are now projecting a gloomier outlook for fiscal 2023."

Surely a coincidence. Today is both National Cheddar Fries Day and 420 Day. Regarding the latter, "Every year on April 20th, cannabis producers, consumers, advocates, and those who are just curious have long celebrated 420 Day. Once an unconventional day, the day has become the rallying cry of those who seek to legalize marijuana for medicinal and recreational uses."