The number of tax filing errors for individual returns doubled in 2021, largely because of mistakes related to new tax credits passed by Congress, according to a Government Accountability Office report.

The recovery rebate credit, created under the appropriations bill at the end of 2020, provided filers with tax credits of up to $1,200 for eligible individuals filing a joint return plus $600 for each qualifying child. The GAO said that claims related to that provision were cited as an error in 11.5 million returns.

Using the tax law for things other than raising revenue can get messy.

The backlog has been building for awhile, according to a GAO report quoted in the article:

“IRS began the filing season with a backlog of 8 million individual and business returns from the prior year that it processed alongside incoming returns,” said the report. “IRS reduced the backlog of prior year returns, but as of late December 2021, had about 10.5 million returns to process from 2021. Further, IRS suspended and reviewed 35 million returns with errors primarily due to new or modified tax credits. As a result, millions of taxpayers experienced long delays in receiving refunds. GAO found that some categories of errors occur each year; however, IRS does not assess the underlying causes of taxpayer errors on returns. Doing so could help reduce future errors, refund delays and strains on IRS resources.”

So e-file, but don't be surprised if refunds and processing are delayed anyway.

When car inventories at the end of the year aren't approximately equal in cost to inventory at the start of the year, it triggers a LIFO recapture tax that could spell tax trouble for dealers, lawmakers said. The resulting inventory shortfalls, which are widely blamed on a shortage of microchips used to build new cars, can be taxed as ordinary income.

Despite their efforts, the legislation faces an uncertain future in the House.

The $46.5 billion budget, which passed the House and Senate April 9, includes a $1.8 billion tax relief plan that would prevent the state gas tax from rising with inflation until January 1, 2023; suspend the 1 percent state sales tax on groceries for one year starting July 1; and send a one-time rebate to individuals who earned less than $200,000 during tax year 2021.

The rebates would be $50 for single filers and $100 for joint filers, in addition to $100 per dependent for up to three dependents. To be eligible for a rebate, a taxpayer must file a 2021 return by October 17.

Kentucky Gov. Andy Beshear (D) vetoed legislation that would phase out the state’s personal income tax, but lawmakers may reverse that decision during the override session scheduled for April 13 and 14.

The legislation as introduced in late February would have reduced the state's 5 percent income tax by 1 percentage point in 2023 and further reduced the tax automatically if revenues hit certain targets. The legislation was amended, and the final version was approved 27 to 8 in the Senate on March 29 and 70 to 24 in the House on the same day.

It’s been pretty clear for awhile now that tax cuts are all the rage in the states this year.

But if anyone needed any final confirmation, just take a look at New York and Illinois. Those two big, blue states both approved budgets over the weekend with extensive tax cuts, following the trend of other states who have seen a healthy jump in revenues over the past year.

The Biden budget would utilize the same approach for crypto transactions.

Does Your State Have a Throwback or Throwout Rule? - Janelle Cammenga, Tax Policy Blog. "Under throwback rules, sales of tangible property which are not taxable in the destination state are 'thrown back' into the state where the sale originated, even though that’s not where the income was earned. This means that if a company located in State A sells into State B, where the company lacks economic nexus, State A can require the company to 'throw back' this income into its sales factor." 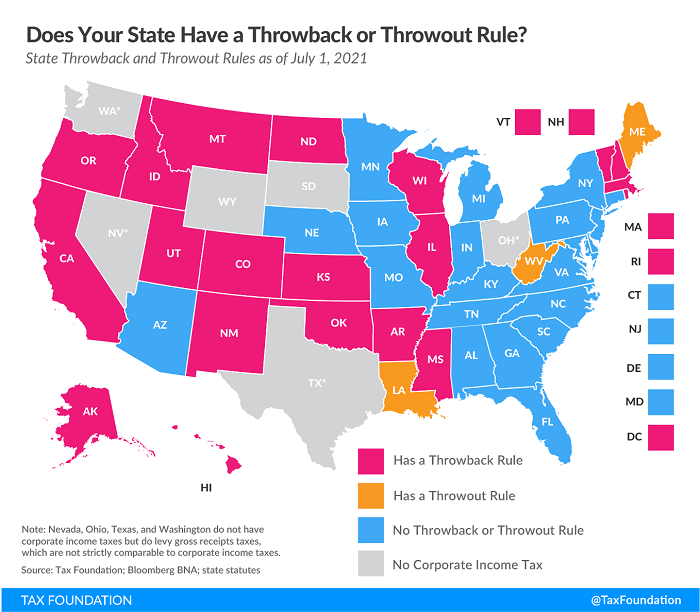 Step Into the Brave New SALT World of Blockchain - Martin Eisenstein and Jamie Szal, Tax Notes. "In determining the sales tax implications of blockchain transactions, the initial questions are obvious: What is the service or product that is purchased — is it tangible or intangible property? Is payment made in a recognized form of consideration? Who is the seller? And where does the purchaser make use of the services or products purchased?"

Married Couples May Be Able To Save Money By Filing Their Taxes Separately. Who Is Missing Out? - Peter Reilly, Forbes. "I'm going to go out on a limb and say that if you have kids and Adjusted Gross Income between $150,000 and $400,000, you really need to be looking at this."

10 last-minute tax filing tips - Kay Bell, Don't Mess With Taxes. "10. Get an extension.
If you just can't finish your 1040 and all the accompanying forms and schedules by April 18, then get six more months to do so. You can get an automatic extension that gives you until Oct. 15 to file your forms."

What financial advisors need to know about crypto taxes this filing season - Lynnley Browning, Financial Planning. "On this year’s Form 1040 (which is due April 18), the IRS shoots a sharp question straight out of the gate: "At any time during 2021, did you receive, sell, exchange or otherwise dispose of any financial interest in any virtual currency?' Taxpayers must tick either 'yes' or 'no' under penalty of perjury. Sounds straightforward, but it’s complicated."

Bozo Tax Tip #4: They Shoot Jaywalkers, Don’t They? - Russ Fox, Taxable Talk. "In any case, the FBAR is no laughing matter. The IRS’s mantra here is to shoot jaywalkers. Don’t become such a person: If you have an FBAR filing requirement, file it! Again, the FBAR is effectively due on October 15th."

How You Can Easily File For A Tax Extension - David Rae, Forbes. "The good news here for all you procrastinators (of people with complicated tax planning needs) is that applying for a tax-filing extension could be one of the easiest parts of getting your taxes done."

Intergenerational Transfer of the Farm/Ranch Business - The Buy-Sell Agreement - Roger McEowen, Agricultural Law and Taxation Blog. "For many farm and ranch family operations, a buy-sell agreement may be just about as important as a properly drafted will or trust."

Principal Residences as Collection Target: TIGTA Criticizes IRS Practice - Leslie Book, Procedurally Taxing. "The report is noteworthy for its highlighting the relatively rare times IRS chooses to pursue a taxpayer’s residence, and how in the times that it does do so, IRS tends to avoid the statutory requirement to obtain court approval for seizures of principal residence by bringing a suit seeking to foreclose on a lien."

Increasing teacher's deduction for classroom supplies masks problem rather than fixes it - Annette Nellen, 21st Century Taxation. "The existence of this deduction and the proposal to increase it seems to take for granted that this is just the way it is. The presumption is that K-12 teachers should be using some of their salary for classroom supplies. This is outrageous! Where is the proposal to better fund K-12 schools so employees don't have to pay for job-related costs?"

Suspending a State Gasoline Tax Sticks It to the Dealers - Jim Maule, Mauled Again. "These grandstanding gimmicks cause delays in road, bridge, and tunnel maintenance and repair, in turn generating more accidents, property damage, personal injuries, and deaths when vehicles hit potholes or other unrepaired structural elements. They encourage increased demand, which in turn increases prices. And they put dealers in Connecticut, and perhaps other states, into financial distress."

Online Instructor Fails Test to Avoid Employment Taxes - Chandra Wallace, Tax Notes ($). "In an April 11 memorandum opinion in The REDI Foundation Inc. v. Commissioner, Judge Joseph W. Nega rejected the petitioner’s claim that the individual who conducted its only activities was an independent contractor for whom it didn’t need to pay federal employment taxes."

This case involves a real estate author who set up a charitable organization that became his vehicle to offer seminars on real estate development. The taxpayer ("petitioner" in the excerpts from the opinion below) was pretty much the whole show for the non-profit, according to Tax Court Judge Nega:

Mr. Petitioner was paid a bit over $90,000 for his efforts in 2015. But the non-profit issued him a 1099 as an independent contractor, not an employee W-2. The non-profit didn't file an employment tax return or remit employment taxes The IRS said that was wrong and issued an assessment of employment taxes. The Tax Court agreed with the IRS, finding that as an officer, he was an employee, and that there was no evidence that he provided services other than an employee. The result was employment taxes and failure-to-file penalties.

This case has lessons beyond non-profits. For example, S corporations officers are employees, not contractors. While unlike non-profits, S corporations can make distributions to owners, the IRS insists that employee-owners take "reasonable" salaries if they are getting distributions. This is especially an issue with single-owner entities, where the temptation to pull distributions instead of salaries to avoid payroll taxes is greatest.

The moral? If you control the entity and are getting paid, the entity should be paying employment taxes on your compensation. Make sure it's a reasonable amount.

In pleading guilty to conspiracy to defraud the United States and wire fraud, Defendant, 44, co-owner J&J Drywall, Inc., a subcontracting business incorporated in Massachusetts and operating in Rhode Island, admitted that he, and the co-owner of the business, paid most employees in cash, failing to properly account for, withhold, and pay federal and state employment taxes; the two similarly failed to make required unemployment insurance contributions.

According to charging documents, from 2013 to 2017, Defendant and his business partner... allegedly used check-cashing businesses to cash more than 600 business receipt checks totaling more than $16 million dollars. While under law enforcement surveillance, Defendant and his business partner allegedly cashed checks at a Rhode Island check-casher, then travelled to construction sites carrying backpacks full of cash, which they left at the construction sites to be used to pay their employees.

Foolproof, except for a couple things. First, banks are required to report transactions that might be "structuring," to the IRS. Second, every employee who sees you paying them with cash out of a backpack is a potential whistleblower. The chances of getting caught can quickly approach 100%.

Fitting. Today is National Big Wind Day. "The day commemorates the recording of the highest natural wind gust measured on the Earth’s surface. It was on the afternoon of April 12, 1934, that winds blowing at 231 miles per hour were recorded by Mount Washington Observatory." Iowa plans to celebrate today "with gusts as high as 39 mph." Oh, and maybe tornadoes, but I don't think that's necessary.