The Tax Court found that a continuing care community used the proper accounting method to determine when it should recognize for tax purposes income from residents that it doesn’t receive until the resident voluntarily leaves or dies.

Accounting method issues often don't get the attention they should. This case shows how important they are. The article explains the issue:

While residents pay a huge sum upfront, the money goes to a third-party trust. Over the duration of a resident’s stay in the community, fees are paid out of the trust to Continuing Life.

For the tax years in dispute, Continuing Life didn’t recognize the contribution amount placed into the trust as income; it amortized and recognized portions of the deferred fee each year, using the straight-line accounting method and the actuarially determined life expectancy of each resident. Once a resident’s agreement was terminated, the company would recognize the unamortized portion of the deferred fee as income.

The IRS said the company was required to recognize the income more quickly and assessed a $20 million tax deficiency.

Instead of paying those fees directly to Continuing Life, the residents remitted them to Kenneth Cummins, as trustee of the so-called master trust, according to court documents.

The IRS said the taxpayer, Continuing Life, should recognize the fees once the as their rights to get the funds back expired. The company instead recognized them on a straight-line basis over the life expectancy of the residents, picking up any unamortized amount when the resident died or moved out. Tax Court Judge Holmes wrestled with the question of whether the IRS has the last word on accounting methods in his opinion:

We've decided that the text of the Code and regulations, tax accounting principles, and caselaw are on the side of Continuing Life. But the Commissioner still has one exceptionally strong argument: on questions of tax accounting, there is solid precedent that says we must uphold his determination unless we find it an abuse of discretion.

Judge Holmes reviews the history of the IRS authority in accounting method cases, and comes to a taxpayer-friendly conclusion:

Textualism would lead us to hold for Continuing Life. The purpose of these sections of the Code and regulations, and more broadly, the purpose of distinguishing tax and financial accounting is in no way in conflict with the conclusion that a textual analysis leads us to. And Continuing Life's accounting for the Deferred Fees fits snugly into the pattern of similar cases. That leaves deference to the Commissioner as the best argument for ruling in his favor. That he has discretion to change accounting methods is undoubtedly true; but the history of how that discretion came to be weakens its power to overcome text, purpose, and analogy.

The Moral? The tax law often dictates methods of accounting. When dealing with an unusual situation or a specialized industry practice, the tax law may not have much to say. In this case, resort to non-tax accounting principles carried the day.

Just 3% of U.S. cryptocurrency investors had filed their taxes as of the end of March. By comparison, Americans overall have filed about 40% of individual returns expected this tax season.

The report, from digital asset platform CoinTracker, said the main reason is that people generally don't know how their cryptocurrency activity affects their tax situation. When given a list of hypothetical tax scenarios, a whopping 97% got at least one wrong, showing many do not realize they need to, for example, pay taxes when trading one type of cryptocurrency for another or when using cryptocurrency to buy a good or service.

Don't rush a filing if you aren't sure how to handle cryptocurrency transactions. Extend and consult a tax pro.

Options for taxpayers who need help paying their tax bill - IRS. "Most individual taxpayers qualify to set up an online payment plan with the IRS, and it only takes a few minutes to apply. Applicants are notified immediately if their request is approved. There is no need for them to contact the IRS for a payment plan or an installment agreement. The agency generally processes online payment plans quicker than requests made with electronically filed tax returns. If a taxpayer just filed their return and they know they'll owe a balance, they may be able to set up a payment plan online before they even receive a notice or bill."

This is the first time HMRC has used new powers to name tax avoidance schemes and their promoters as part of a campaign to warn the public not to get caught up in tax avoidance.

Both schemes involve individuals agreeing an employment contract and working as a contractor. The schemes pay contractors the National Minimum Wage with the remainder of their wage paid through a loan to try to avoid National Insurance and Income Tax.

That doesn't work in the U.K, then. It wouldn't work on this side of the pond either.

For those who make estimated federal tax payments, the first quarter deadline is Monday, April 18 - IRS. "Form 1040-ES, Estimated Tax for Individuals, includes instructions to help taxpayers figure their estimated taxes. They can also visit IRS.gov/payments to pay electronically. The best way to make a payment is through IRS Online Account. There taxpayers can see their payment history, any pending payments and other useful tax information. Taxpayers can make an estimated tax payment by using IRS Direct Pay; Debit Card, Credit Card or Digital Wallet; or the Treasury Department's Electronic Federal Tax Payment System (EFTPS). If paying by check, taxpayers should be sure to make the check payable to the 'United States Treasury.'"

State and Local Tax Burdens, Calendar Year 2022 - Erica York and Jared Walczak, Tax Policy Blog. "In this study, we define a state’s tax burden as state and local taxes paid by a state’s residents divided by that state’s share of net national product." 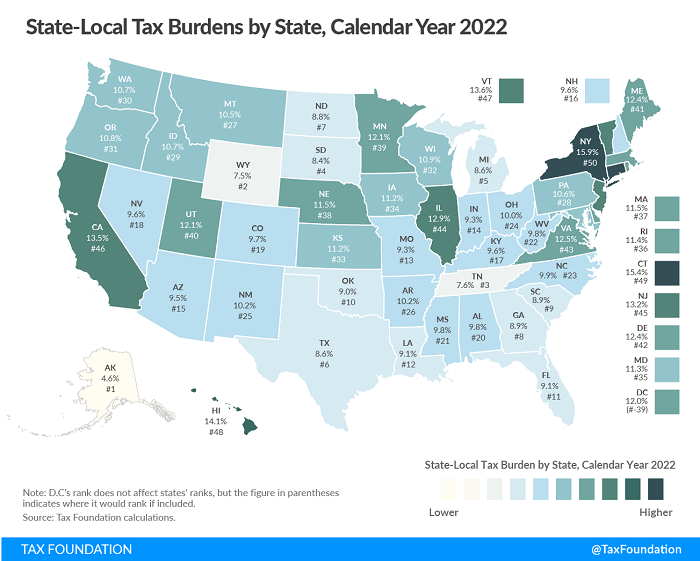 Among states with Eide Bailly offices, California has the highest burden, at 13.5%. South Dakota's 8.4% is the lowest.

Don’t Forget About Filing Your FBAR and Related Forms on Tax Day - Kelly Phillips Erb, Bloomberg. "In other words, if the total of all of the foreign accounts in which you have an interest reaches $10,000 or more at any point in the calendar year, you may need to file an FBAR. And it’s worth noting that the $10,000 threshold is not indexed for inflation—it’s the same today as it was in 1970. The threshold applies even if you’ve been faithfully reporting the income on your federal income tax return and even if you’ve never repatriated a single dollar to the U.S. It also applies even if the account produces no taxable income."

IRA contribution, and possible tax deduction, time - Kay Bell, Don't Mess With Taxes. "By opening a Roth IRA when you're young, and then contributing the maximum allowable amount every year, you'll have decades of compounded earnings that will be out of the IRS' reach when you retire."

Bozo Tax Tip #7: Only Income Earned Outside the United States Is Taxable - Russ Fox, Taxable Talk. "Section 861 states that certain items are always considered as income from within the United States. It does not say that income earned in the US is exempt from tax. But tax protesters claim that’s the case; courts, though, basically state, ‘You must be kidding.’ This argument has never been used successfully. In an audit or in court, if you use the Section 861 argument you have no chance of success."

Notice of Claim Disallowance: Don’t Make This Mistake - NTA Blog. "Taxpayers will have to rely on the IRS to consider and process their dispute to the notice of claim disallowance within the two-year period; otherwise, they must file suit to protect their rights. But pushing these disputes through the administrative pipeline within the two-year limitation is difficult under normal circumstances, and considering the current backlog, I have concerns many of these cases will not be worked timely... a universal postponement of the two-year period is the optimal solution for addressing this problem."

New Tax Implications for Hobbyist Sales Using Payment Apps - Joshua Dalrymple, Bloomberg. "It is important to understand that the taxable amount for these transactions has not changed, nor have the reporting requirements for the hobbyist taxpayer. The Internal Revenue Code has required taxpayers to report all income from whatever source derived both before and after this recent reporting change. It also doesn’t mean that the entire amount of the annual transactions is now taxed just because it is included on the 1099-K. This new provision simply puts an additional reporting burden on the payment apps."

Court Invalidates Regulation for Invalidity of Good Cause Statement - Jack Townsend, Federal Tax Procedure. "I am not so much concerned about the substantive issue of whether Liberty Global owes the tax in question.  I am concerned about what I perceive as lack of sound analysis on the APA issues by parties and, as a result, by the Court."

Justice Department Continues Efforts to Stop Fraudulent Tax Preparers - US Department of Justice. "Return preparer fraud is one of the IRS’ Dirty Dozen Tax Scams. Unscrupulous preparers who include errors or false information on a tax return could leave a taxpayer open to liability for unpaid taxes, penalties and interest."

The press release is a good summary of common preparer scams, including this: "The returns fraudulently lowered the clients’ tax liabilities or inflated their refunds by claiming false education credits or dependents or by manipulating the clients’ income to qualify for larger earned income tax credits. "

In the first ruling, the court described Taxpayer as “a debtor with ‘a history of fraud, tax evasion, and asset dissipation’” who is “not fit to maximize the return on a real estate transaction” and denied his request to repair and sell the damaged townhouse. The order appointed a receiver to sell the property “as is.”

The court order is uncharitable to the taxpayer:

Taxpayer contends, though, given 30-45 calendar days, and at the cost of only $25,000-$30,000, he could repair the Brown Deer Property and sell it for $125,000. (ECF No. 237 at 4.) This argument runs headlong into the stout wall of reality. First, Taxpayer does not support his estimates with evidence, instead asking the Court to take him at his word. But three years into this litigation, the collateral value of Taxpayer’s word is exhausted. He has conducted too much of his case in bad faith, cried wolf too many times. To credulously believe him now would transform the Court into Charlie Brown approaching the infernal football. And indeed, the Court takes judicial notice that the Brown Deer County Assessor’s website lists the 2021 estimated fair market value of the Brown Deer Property as $78,600, far below Taxpayer’s proposed sale price (Order footnote: "This was, of course, the value before Taxpayer destroyed the interior.") Additionally, to the extent that Taxpayer has a spare $30,000 at his disposal, he should use it to pay down his outstanding tax debt.

Sometimes it's easier just to pay the taxes.

Not just for breakfast. It's National Burrito Day! "Can you imagine a time where burritos didn’t exist? Celebrate today’s holiday with us by eating as many burritos as you want. We’re not here to judge."