The paper takes a mind-numbing path from room to room to be sorted, retyped and filed, sometimes with a stop at a team devoted to discovering errors. They’re not all that rare: The error rate for paper returns was 22 percent last year, according to the Taxpayer Advocate Service. Along the way, a paper return is touched by humans at least a dozen times.

All of these paper returns — which make up 10 percent of the IRS’s work, with the rest electronic filings — are marked with ink and old-fashioned rubber stamps to give them locator numbers before they go into storage. Just one company is still in business to service the stamps, which must be advanced to the next day with a wooden stylus.

This article, and the Wall Street Journal piece we linked yesterday, should cure any delusions of adequacy with respect to IRS processes. There are people there who actually are paid to circle numbers in red ink for others to manually punch into computer terminals.

Nothing in the article inspires confidence in the IRS Commissioner's pledge to cure the agency's multi-million item backlog of unprocessed returns.

Employers will also have to deal with additional state and local withholding obligations resulting from employees telecommuting from different jurisdictions. Businesses need to comply with each jurisdiction’s withholding rules; failure to do so potentially exposes employers to liability and penalties.

Complicating the situation for some employers, five states have rules similar to convenience of the employer rules that can require businesses operating there to withhold tax on the income of their employees when they work out of state instead of in their in-state office. If the state’s rule deems the remote work arrangement to be for the employee’s convenience rather than the employer's necessity, the state says that its tax applies to the employee’s income earned while working outside the state. Experts said convenience of the employer rules — which have long been controversial — could face greater opposition from other states as the trend of teleworking continues and so-called “convenience states” seek to tax work performed out of state by telecommuting employees.

How Remote Work Can Help Boost Rural Communities - Jody Padar, Bloomberg. "An influx of remote workers could certainly be a cultural change for a rural community, but there are serious reasons to be optimistic. Whether you’re a CPA, lawyer, bartender, or an engaged member of a rural community, this trend will likely bring new opportunities and positive impact directly to you."

"My understanding is that there is zero prospect of the U.S. Senate agreeing to ratify any kind of treaty change — Pillar One or Pillar Two — and the U.S. proposal is that this be achieved by treaty overrides," Neidle told the conference. "I don't think the European countries that are so keen on Pillar One have really internalized that the U.S. is just not even going to try to ratify a treaty change."

This case breaks no new ground, but it reminds us of the dangers of falling behind on payments of withheld taxes - the "trust fund" taxes in the case. These are usually employment taxes, but it can cover other taxes collected at sale by businesses, such as aviation excise taxes.

The tax law holds "responsible persons" liable for unpaid withholding taxes. If a business financial employee pays, say, vendors, rather than remitting funds to the IRS, the financial employee is on the hook for the unpaid taxes. Once you are on the hook, it's almost impossible to get off, even in bankruptcy.

Energy LLCs Can’t Shield Owner From Employment Tax Penalties - Nathan Richman, Tax Notes ($). Some taxpayers think that Limited Liability Companies have magical powers. Tax Tic Toc has (very mistaken) takes on how having an LLC enables you to deduct all sorts of living expenses. In this case, a taxpayer thought it would protect them from having to pay employment taxes. "The sole member of two limited liability companies can’t have their bankruptcy estate cover interest and penalties on employment tax liabilities that will instead flow through to him, a bankruptcy court ruled."

Last week, the House of Representatives voted to delay the age at which people must start taking money out of most retirement accounts to 75, from 72. If the bill, which currently has bipartisan support in the Senate, becomes law, it would mark the second time in three years that Congress raised the required distribution age. That move is a boon to those who can afford to sit on nest eggs longer to allow for more tax-deferred growth.

Yet complicating the picture is recent IRS guidance that requires many who inherit retirement accounts to drain them faster—over 10 years instead of a lifetime.

Related: How the SECURE Act will Affect Your Retirement Plan Right Now. 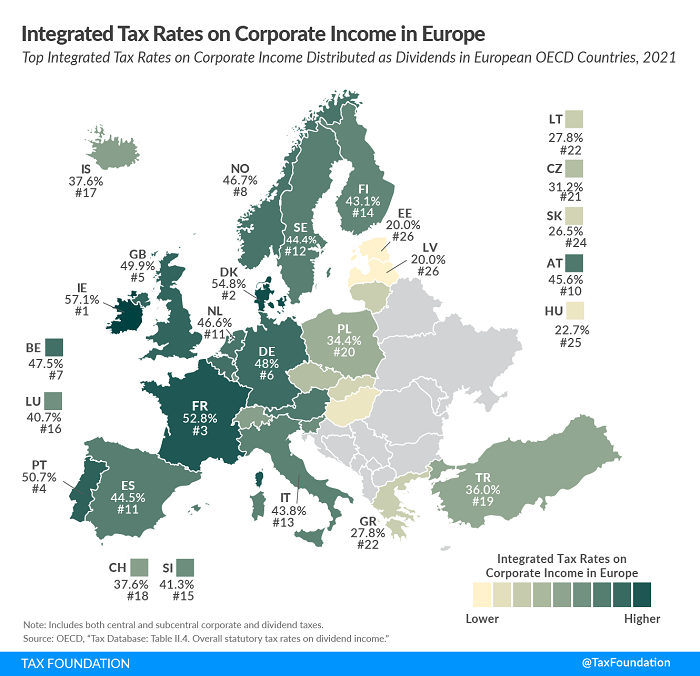 The current top US integrated rate is about 39.8%, ignoring state taxes.

5 April tax-filing moves - Kay Bell, Don't Mess With Taxes. "Sloppy, error-ridden returns submitted in haste are a hassle for everyone. The IRS would rather you take the extra six months you get by submitting  Form 4868 by the April deadline to fill out and file your form later, and accurately."

The Conundrum of Cryptocurrency? - Roxanne Bland, Tax Notes. "Bills have been introduced in the legislatures that would amend numerous existing statutes, tax and otherwise, to accommodate cryptocurrency, including granting taxpayers the ability to pay their tax debts using it. One state is preparing to implement its ability to accept cryptocurrency payments within a matter of months. If all goes well, it is almost certain that we will see other states doing likewise soon."

Captive Insurance – Part Three - Roger McEowen, Agricultural Law and Taxation Blog. "The recent developments surrounding micro-captive arrangements have forestalled the IRS from treating them as 'listed transactions' at least until the IRS complies with the APA’s notice and comment requirements.  That’s a big development on the penalty issue, but it doesn’t mean reporting requirements necessary to avoid penalties won’t come back in the future."

Will Smith Oscars Slap Could Have Tax Impact Too - Robert Wood, Forbes. "So if Chris Rock sues Will Smith and recovers, is it taxable to Chris Rock? Anyone pursuing legal claims cares about taxes when they win, but determining how a settlement will be taxed can be tricky. What’s more, since 2018, in some cases the legal fees you pay to get a lawsuit settlement can't be deducted. So how much in tax will Chris Rock pay if he receives a settlement? The slap was physical, and damages for personal physical injuries like a serious auto accident are tax free under Section 104 of the tax code. But what is 'physical' isn’t clear"

A sure sign of the approach of the tax deadline is when Russ Fox starts posting "Bozo Tax Tips" - lessons in tax hygiene by way of bad examples. He starts with Bozo Tax Tip #10: Email Your Social Security Number (or EIN)! and Bozo Tax Tip #9: Move Without Moving!: From #10: "I have some clients who are incredibly smart. They make me look stupid (and I’m not). Yet a few of these otherwise intelligent individuals persist in Bozo behavior: They consistently send me their tax documents by email."

Use a secure portal, like my.eidebailly.com, to transmit your tax documents, unless you don't mind having your identity stolen.

The Tax Court found that a self-described freeway flier failed to properly keep records of her expenses and played fast and loose with requirements for claiming business and charitable deductions on her tax return.

In an April 4 summary opinion... Special Trial Judge Peter J. Panuthos upheld the IRS’s disallowance of more than $23,000 in deductions and a $1,000 accuracy-related penalty...

As taxpayers and preparers scramble to meet the (outdated and pointless) April 18 deadline, this case reminds us of basic lessons in charitable and business deductions.

Business first. The taxpayer claimed vehicle mileage deduction of $19,133 based on 35,432 business miles - 90.777% of miles traveled that year. The IRS disallowed $6,243 of the deductions for lack of substantiation:

Petitioner's 2016 vehicle expenses are subject to the strict substantiation rules of section 274(d), and thus they cannot be estimated. For expenses relating to vehicles, a taxpayer must substantiate with adequate records or sufficient evidence: (1) the amount of each separate expense using either actual costs or the standard mileage rate; (2) the mileage for each business use of the passenger automobile and the total mileage for all purposes during the taxable period; (3) the date of the business use; and (4) the business purpose of the use.

In support of her reported vehicle expenses of $19,133, petitioner produced a handwritten mileage log and a “vehicle service history report” for a 2015 Jeep Renegade... Petitioner did not provide further evidence to corroborate her testimony that she incurred expenses for the second vehicle and that it was used for business purposes.

No evidence, no deduction.

Now, for the charity:

If the donation is a small amount, any written or other evidence from the donee charitable organization acknowledging receipt is generally sufficient. Nevertheless, contributions of $250 or more require donee written acknowledgment containing specified information.  Furthermore, additional information is required to support a deduction exceeding $500 for a charitable contribution of property. Specifically, the taxpayer must also maintain written records establishing: (1) the item's manner of acquisition as well as either the item's approximate date of acquisition or the approximate date the property was substantially completed and (2) the cost or other basis, adjusted as provided by section 1016, of property donated by the taxpayer during the taxable year.

The moral: Business or charity, it's documentation or bust.

News Flash! It's National Flash Drive Day. "For example, did you know that the first flash drive had only 8 MB data capacity? Today, the tiny gadget, usually weighing less than an ounce, can hold more than 2 TB." And the little buggers can also hold all manner of nightmare malware too!