President Joe Biden signed off Tuesday on a $12.6 billion fiscal year 2022 budget for the Internal Revenue Service, a $675 million boost from last year's budget that still falls short of the amount desired by Democrats.

Other line items include $5.4 billion for enforcement, which is also a $225 million increase from last year's amount, as well as $4.1 billion for operational support and $275 million for modernizing business systems. The $12.6 billion budget, about a 5.7% increase from last year, falls about $1 billion short of the funding sought by Democrats, who say the authorized funds won't be sufficient to address the agency's ongoing taxpayer service issues.

Relief from Addition to Tax for Underpayment of Estimated Income Tax by Individual Farmers and Fishermen - IRS:

Under the authority granted by section 6654(e)(3)(A), the addition to tax under section 6654 for failure to make an estimated tax payment for the 2021 taxable year is waived for any qualifying farmer or fisherman who files a 2021 tax return and pays in full any tax due on the return by April 18, 2022, or, for those taxpayers who live in Maine or Massachusetts, by April 19, 2022.

Farmers can skip making estimated tax payments if they file and pay in full by March 1, instead of waiting for the normal April 15 deadline. This IRS notice (Notice 2022-13) waives the 2022 March 1 rule because some software providers were unable to e-file that day. The waiver applies to all qualifying farmers and fishermen, not just those who ran into software problems.

The March 1 rule is an outdated nod to farmers. In an age when farmers use precision computer and GPS guidance to plant hi-yield GMO crops while executing sophisticated hedging strategies, farmers are probably sophisticated enough to comply with the same tax rules as anyone else.

States that score well on the Index’s individual income tax component usually have a flat, low-rate income tax with few deductions and exemptions. They also tend to protect married taxpayers from being taxed more heavily when filing jointly than they would be when filing as two single individuals. In addition, states perform better on the Index’s individual income tax component if they index their brackets, deductions, and exemptions for inflation, which avoids unlegislated tax increases. 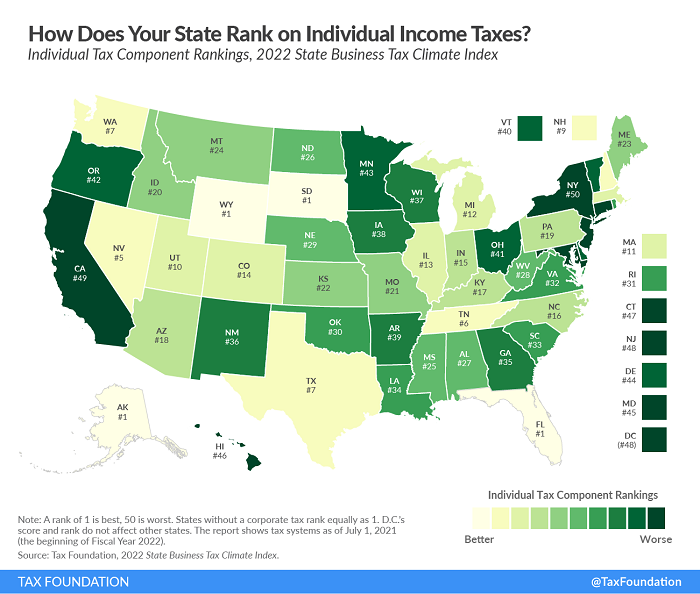 The ongoing transformation of Iowa’s tax code is certainly remarkable. In 2018, Iowa had a nine-bracket individual income tax with a top marginal rate of 8.98 percent and a graduated-rate corporate income tax with a top rate of 12 percent, both with alternative minimum taxes; an inheritance tax; and a well-intentioned but distortive policy of federal deductibility. Once current reforms have phased in, Iowa will be able to boast a 3.9 percent single-rate individual income tax, a 5.5 percent flat corporate income tax, and no inheritance tax or alternative minimum taxes. Improvements have been made to the state sales tax base and several tax credits have been reformed. Additionally—a more mixed bag economically—the state will exempt retirement income and certain farm rental income from taxation.

The most recent legislation, H.F. 2317, builds on reforms adopted in 2018 and 2021, and is broadly consistent with recommendations made by the Tax Foundation in our 2016 guide to Iowa tax reform. Before the reforms of 2018 took effect, Iowa ranked 46th overall on our State Business Tax Climate Index, a measure of state tax structure. With the full phase-in of the newly enacted reforms, Iowa would rank 15th overall, an improvement of 31 places. This would tie North Carolina for the largest improvement in the Index’s history. In the wake of historic reforms beginning in 2013, North Carolina improved from 41st to 10th overall in seven years (currently 11th).

There are flaws in the new Iowa system. The retirement exclusion is unwise, and there remain too many special interest tax credits and carve-outs. But when compared to the Iowa tax system when I started practice in the 1980s, with a 13% top individual rate starting at taxable income of $76,725, the improvement is astonishing.

EU Minimum Tax Bill Falls Short Of Required Unanimity - Todd Buell, Law360 Tax Authority ($). "Objections from Poland, Sweden, Malta and Estonia kept EU ministers from signing off on a minimum tax deal that was agreed to in principle by nearly 140 jurisdictions in October. Nevertheless, French Finance Minister Bruno Le Maire said he is confident a deal could be reached by the next finance ministers' meeting in early April."

Elusive Agreements, Gig Workers, and Retirees - Renu Zaretsky, Daily Deduction. "The second-ranking Senate Democrat sounds like a man worn out by the endless intra-party disputes over a big social spending, climate, and tax bill. He told Roll Call, 'I am planning to finish this year and hope to guide the Democratic caucus to success, but not assuming that reconciliation be part of it… I’ve been burned by this stove enough times. I'm not going to grab it another time.' Durbin did hold out hope for a separate child tax credit bill."

March Madness begins! Place your bets and pay your taxes on winnings - Kay Bell, Don't Mess With Taxes. "As everyone knows by now, gambling winnings are taxable income. When your lucrative luck comes through a sportsbook or other state-approved regulated outlet, then your winnings information most likely will be shared with the IRS via third-party tax reporting."

So You Haven’t Registered in a State Where You Have Nexus… Lee Breslour, TaxJar. "If your e-commerce business has enough sales to achieve economic nexus in a state, but you haven’t yet registered for a sales tax license, you’re not alone. Tax experts are often asked about the optimal time to register for a sales tax license, which you can learn more about here. But there’s another question worth exploring, and that is, 'What does a company do once it has already hit nexus, but hasn’t registered with a state?'"

IRS Issues Guidance on Self-Dealing Rules for Private Foundations - Cory Halliburton, Freeman Law. "The excise taxes imposed by Section 4941 for engaging in an act of self-dealing are assessed against the self-dealer and, in appropriate cases, the foundation managers. Generally, a disqualified person who participates in an act of self-dealing is liable for the tax even though that person had no knowledge at the time of the act that the act constituted self-dealing."

Teachers will sometimes say there is no such thing as a bad (or “stupid”) question. I’d say the jury is out on that one.

Everyone, however, can agree that there is such a thing as a bad answer (see Keith’s recent post here). My next few posts will detail a particular kind of “bad answer” and propose ways of addressing it. Specifically, I will address IRS “answers” in Tax Court that appear to put absolutely no effort into investigating the facts alleged before denying them all “for lack of sufficient information.”

Note To Governors: Cutting Taxes Will Make Inflation Worse, Not Better - Howard Gleckman, TaxVox. "Truth is, elected officials can’t do much to slow inflation. The Fed can address the problem by raising interest rates, as it will start doing this week. But the best lawmakers can do is not make the problem worse by throwing more money at consumers, either in the form of tax cuts or new spending."

To Stimulate R&D Investment, Stop Penalizing it in the Tax Code - Alex Muresianu and Garrett Watson, Tax Policy Blog. "When policymakers were designing the Tax Cuts and Jobs Act (TCJA) of 2017, they looked for revenue raisers within the 10-year budget window. One of the revenue raisers they selected changed how companies can deduct R&D expenses. Before the TCJA, companies could deduct the full cost of R&D investment immediately, but starting in 2022, companies would have to amortize R&D investment, spreading deductions over five years. R&D produced abroad is now deducted over 15 years."

The NCAA vs. Taxation: How Colleges Are Caught in the Middle - David Stewart, Robert Goulder, and Richard Schamalbeck, Tax Notes Opinions. "Obviously, it had to take the form of an excise tax in the nonprofit area. It's like the bandits in the Sierra Madre telling people that they don't need no stinking badges. The NCAA is in a situation of saying that they don't need no stinking deductions if you're not going to be taxed on your income at all. An alternative to that is to oppose the excise tax, and then the rate of the excise tax is precisely what the corporate tax rate is now of 21 percent."

A member of the Newark Municipal Council and Board of Directors of the Newark Community Economic Development Corporation (NCEDC) today admitted scheming to obtain bribes and kickbacks and subscribing to a false personal tax return for 2018, U.S. Attorney Philip R. Sellinger announced.

Joseph A. McCallum Jr., 66, of Newark, pleaded guilty before U.S. District Judge William J. Martini to an information charging him with one count of wire fraud for devising a scheme, using interstate wire communications, to defraud Newark and the NCEDC of the right to McCallum’s honest services and one count of subscribing to a false personal tax return for calendar year 2018.

The bribes and kickbacks received and sought by McCallum through the associate included the following:

Hard to believe a man on the taxpayers' payroll took bribes and failed to report them on his 1040.

When masks aren't enough. Today is No Selfies Day!