Punchbowl News reports on this week's tax-related drama in Washington:

Government funding expires Friday. As in three days from now. And we still haven’t seen the $1.5 trillion omnibus bill designed to keep federal agencies open through the end of the fiscal year.

The bill is likely to be thousands of pages long, and it will impact every facet of the federal government. It needs to get a vote in the next few days. Yet top lawmakers and leadership are still haggling over it.

The tax extenders package was still being worked through on Monday night. It's not clear if that will be part of the final legislation.

Even if it they don't make it in this bill, they aren't really dead. Few things endure like temporary tax provisions.

It wasn't immediately clear what the fate of several tax-related provisions would be in the omnibus talks.

Corporations and some lawmakers are pressing to restore immediate, full expensing of research and development costs in the omnibus, but it wasn’t looking likely that change would make it in.

Also facing an uphill climb despite bipartisan support was a restoration for the final quarter of 2021 of the employee retention tax credit, which provided pandemic relief largely to small businesses and nonprofits.

Several senior Democrats predicted their party would pivot to seeking new measures aimed at helping taxpayers with moderate and low incomes, including a mandate for regulation of tax preparers, a same-sex marriage tax fix and parts of a House committee-approved retirement savings package, H.R. 2954.

While such items are not currently part of the pending fiscal 2022 omnibus spending bill, they said these priorities could move in a year-end funding patch or other legislation. Democrats also are hoping to advance green energy incentives and other priorities, with or without an extension of the now-expired increase in the child tax credit from $2,000 to $3,600 for those under 6 and $3,000 for those aged 6 to 17, which was included in the House-passed BBB Act, H.R. 5376.

So the IRS is doing such a bang-up job with its current duties that they should also regulate the preparers that help taxpayers with their tax compliance. What could go wrong?

Where do you find new IRS employees? - Bernie Becker, Politico:

In fact, the IRS is hoping to add 10,000 new staffers to help tackle the backlog and will be able to disregard some of the federal hiring standards to bring them on as quickly as possible, as The Washington Post first reported.

Still, that hiring push raises questions of its own. Perhaps the biggest one: Can the IRS really make people want to take a customer service job with them?

Congress may find agreement on extending green tax credits - Michael Cohn, Accounting Today. "While the Biden administration’s Build Back Better Act remains stalled in the Senate, lawmakers may be able to advance some parts of the legislation, including tax credits for electric vehicles, solar panels and home energy efficiency that have wide appeal to voters."

In a consolidated lawsuit (Quinn v. Washington and Clayton v. Washington), the plaintiffs, via a motion for summary judgment, asked the State Superior Court to rule the excise tax unconstitutional.

On March 1, 2022 the Superior Court judge granted (here) the plaintiff’s summary judgment motion, ruling that the excise tax “is not levied upon ‘the sale or transfer’ of capital assets” and instead “levies a tax on receipt…of capital gains.” In other words, the judge ruled the “excise tax” is, in form, an income tax.

3 Things To Know About State Tax Conformity Now - Maria Koklanaris, Law360 Tax Authority. "Business groups are urging states to decouple from several changes to the TCJA that take effect for 2022, and some states are moving to do so, at least from the provisions dealing with the limitation for the deduction of business interest expenses."

A number of European countries do not levy capital gains taxes on the sale of long-held shares. These include Belgium, the Czech Republic, Luxembourg, Slovakia, Slovenia, Switzerland, and Turkey. Of the countries that do levy a capital gains tax, Greece and Hungary have the lowest rates, at 15 percent.

The top U.S. capital gain rate for securities held over one year is 23.8%, excluding state taxes. 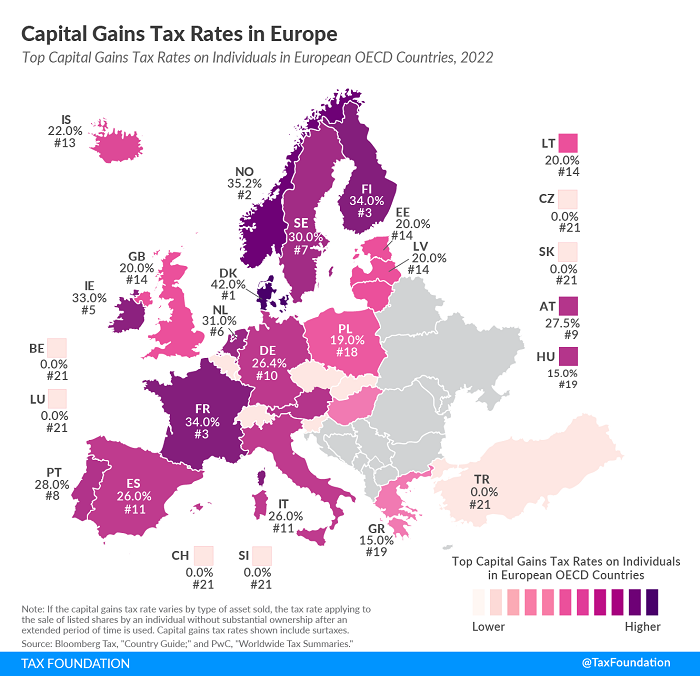 Should An IDGT Be Part of Your Estate Plan? - Roger McEowen, Agricultural Law and Taxation Blog.

Grantor Trusts - Jason Freeman, Freeman Law. "If the grantor trust rules apply, the trust is not treated as a separate taxable entity for Federal income tax purposes—at least to the extent of the grantor’s interest.  Said another way, the provisions “look through” the trust form and treat the grantor and the trust as one and the same."

Seven Takes on the Tax Impacts of the War in Ukraine - Jared Johnson, Bloomberg. "A short-term result of the invasion has been a downturn in investment markets that hold Russian assets. Many advisers have seized the opportunity to capture losses to offset taxable gains incurred by their clients in a process known as loss harvesting. The result is that investors can afford to incur capital gains this year or carry those losses forward for another positive year."

Relief to Be Granted to Farmers and Fishermen Unable to File by March 1 Due to Issues With Form 7203 - Ed Zollars, Current Federal Tax Developments. "Unfortunately, a number of tax software vendors were not yet able to electronically file new Form 7203, S Corporation Shareholder Stock and Debt Basis Limitations by March 1. The new form is required to be filed by many, if not most, individuals who hold stock in an S corporation with their 2021 income tax return."

VITA & TCE volunteers are back, helping taxpayers prepare & file returns for free - Kay Bell, Don't Mess With Taxes. "VITA and TCE sites are found nationwide, and offer free basic tax return preparation to qualified individuals who need assistance doing their own taxes. The programs are particularly welcomed by folks not completely comfortable with using tax preparation software on their own, but who can't afford to hire a tax preparer."

Federal Prosecutors Coming Down Hard On Abusive Conservation Easement Promoters - Peter Reilly, Forbes. "Putting aside the valuation issue, which is at the heart of the matter, the indictment alleges other activity that would be really bad even if the deals were legitimate. Most egregious was the backdating. Of course they did not want to inconvenience the people who had actually invested in the year of the donation rather than the subsequent year..."

Tax Court Takes Almost Five Years to Decide a Dependency Exemption Case - Keith Fogg, Procedurally Taxing. "No matter how I factor it, three years and three months to decide a dependency exemption case after the trial, even one that required three government lawyers against one pro se taxpayer, seems much too long."

This GOP Senator can’t stop talking about his plan to raise taxes - Alan Cole, Full Stack Economics. "For one thing, if you want to come up with a fake policy just for show, you can invent something a lot more popular than raising taxes. For example, in 2020, Vice President Kamala Harris, then a senator running for President, simply offered to give everyone $2,000 a month until the pandemic ended. That was a fake policy, too, but a much more appetizing one than raising taxes."

Odd Tax Proposal Harms Tax Gap and Tax Transparency - Annette Nellen, 21st Century Taxation. "H.R. 6937, Shifting Limits on Thresholds (SLOT) Act, is a bipartisan proposal to increase the information reporting threshold for slot machine winnings from $1,200 to $5,000 and adjust it for inflation. The sponsors note that the threshold has been $1,200 since 1977... his proposal would harm our tax law by reducing gambling winnings that get reported (that is, it would increase the tax gap) and make many people think that such winnings are only taxable if they exceed $5,000."

California Proposes Tax Increases Again With Wealth Tax - Robert Wood, Forbes. "This isn’t an income tax at all, it would be America’s first bona fide wealth tax. It would tax households worth more than $50 million with a 1% annual wealth tax. And if you are worth over $1 billion, the rate would be 1.5%. Again, that’s every year."

No substantiation, no miles. A real estate broker who claimed $22,345 as a travel expense using the standard mileage rate had the misfortune to get an IRS audit. Special Trial Judge Guy lays out the facts:

Petitioner reported vehicle expenses of $22,345 using the standard mileage rate of 54 cents per mile. Although petitioner maintains that she contemporaneously recorded all of her business-related trips and expenses in a notebook that she kept in her car, she did not offer the notebook as evidence. Instead, she offered a mileage log prepared in advance of trial and purportedly derived from information in the notebook. Most of the entries in the mileage log were limited to a short statement of the number of miles petitioner drove on a given day, a reference to the person(s) she met with, and/or the name of the city, town, or general location that she visited (e.g., “[m]et w/Connie potential client Duluth”).

Longtime readers know where this is going. From the Tax Court opinion:

The mileage logs that petitioner offered to substantiate the vehicle expenses that she reported on Schedules A and C are inadequate to satisfy the heightened requirements of section 274(d). In sum, the logs are not reliable because they purportedly reflect information that petitioner drew from a notebook that is not part of the evidentiary record and the log entries often lack necessary information such as the location where petitioner started a particular trip, her precise destination, and the business purpose for the trip. Under the circumstances, petitioner is not entitled to deductions for vehicle expenses reported on Schedules A and C in excess of the amounts that respondent conceded.

But all is not lost. In addition to the Schedule C agent business, the broker had a rental property:

Petitioner provided a more detailed mileage log in support of the vehicle expenses that she reported on Schedule E. Considering the various records that petitioner provided and her role in overseeing the renovation work at the Castleair Drive house, including purchasing and delivering the materials needed to complete that work, she adequately substantiated and is entitled to a deduction of $3,178 for vehicle expenses reported on Schedule E.

The Moral? Details matter when you want to deduct car expenses. Whether you use an app or an old-school logbook, track your miles as you go. You need your destination, your starting point, who you are going to see, and the business purpose of the meeting.

Look this post over carefully. Today is National Proofreading Day!