What the Hill thinks about Biden's domestic agenda ahead of SOTU - Punchbowl News:

84% of senior Democratic aides believe the BBB as passed by the House is dead. This is, of course, a recognition of reality, since Sen. Joe Manchin (D-W.Va.) is fully against that piece of legislation.

We asked aides if the member of Congress they work for supports breaking the BBB up. The aides told us that most Democratic members believe that breaking up the massive climate and social spending legislation into “chunks” is the best path forward. 89% of Democrats said they should pass whatever they can before midterms. Just 9% said that Congress should continue to try to pass BBB as a whole. This is a massive setback for progressives in the House, who wanted the entirety of the BBB pushed through Congress.

We asked staffers which of the BBB provisions were most likely to be repackaged and passed. 49% said expanding the current Child Tax credit, 47% said solar and wind energy tax credits and 45% said making ACA subsidies permanent.

These all require tax offsets. Remember that Manchin is OK with Tax increases, but Arizona senator Sinema has resisted - and Punchbowl News has this tidbit:

Democrats also appear to be rebranding the measure, which they previously dubbed "Build Back Better," after Biden's 2020 campaign slogan. In recent months, some top Democrats, including Speaker Nancy Pelosi, have suggested it may need a new name, as the measure stalled and is likely to undergo significant changes in the Senate.

It’s unclear if Biden will pitch additional offsets in his State of the Union speech. The administration officials said only that they would “outline proposals to make sure that corporations and the wealthiest Americans pay their fair share while making clear that no one making under $400,000 a year should see their taxes increase.” That would apply to the limited tax increases in the package, as well as others like rate increases that Biden proposed but Congress cut amid opposition from Sen. Kyrsten Sinema, D-Ariz.

According to the White House, Biden will urge Congress to pass legislation lowering the cost of “everyday expenses working families face,” including tax relief for families that builds on the temporarily enhanced earned income tax credit and child tax credit provisions of the American Rescue Plan Act.

In addition, Biden will also describe proposals to make wealthy taxpayers and corporations pay their “fair share,” while keeping to his pledge that taxpayers making less than $400,000 annually would remain untouched, according to the White House.

On climate change, Biden will push for clean energy tax credits that were part of his stalled legislative agenda, according to a White House fact sheet sent out late Monday.

Biden aides said he will also address how any new plans should be paid for. “The president will outline proposals to make sure that corporations and the wealthiest Americans pay their fair share,” an aide said Monday.

A focus on corporations could mean either an increase in corporate rates, a push for a minimum tax, or international tax measures to implement the agreement reached last year at the OECD.

GOP To Seek Limits On IRS Enforcement In Funding Talks - Alan Ota, Law360 Tax Authority ($). "Several senior Republicans said there would be a drive to limit increases in IRS funding in a potential fiscal 2022 catch-all spending bill or a reconfigured version of the House-passed Build Back Better Act, H.R. 5376. Republicans have proposed to freeze the current level of funding for audits and enforcement and to bar certain activities, including President Joe Biden's stalled proposal to require bank information reporting on account transactions."

Under H.B. 82, forgiven loans for disadvantaged farmers and ranchers under section 1005 of the American Rescue Plan Act of 2021 (P.L. 117-2) are also exempt from state income tax and are excluded from calculations when determining a taxpayer's federal income tax deduction for state tax purposes.

The measure also extends the tax return due date for the state financial institution excise tax and state corporate income tax to one month after the due date of the corresponding federal return.

February of 2022 brings a variety of noteworthy California income tax developments, including:

What's the IRS have to do with Russia and Ukraine? - Bernie Becker and Aaron Lorenzo, Politico:

Experts say that the agency would be in a good position to track Russian assets, including those of President Vladimir Putin and his allies. The IRS’s criminal investigation division is the only part of the whole federal government “that devotes all of its resources to solving financial crimes,” said Don Fort, who led that division between 2017 and 2020 — something that makes them “uniquely situated to fill this role.”

Not only that, the agency’s leaders and criminal investigators would almost certainly jump at the opportunity to help. The IRS’s criminal investigations division frequently teams up with the Justice Department to track and trace any number of avenues that people use to conceal their assets — be it through cryptocurrencies, shell companies or other means.

Unlike similar split-dollar life insurance arrangements, only the irrevocable trust had the power to terminate the policies, according to the opinion.

"Levine irrevocably surrendered her interest in the insurance trust and had no right to change, modify, amend, or revoke its terms," the opinion said. "Once it was created, Levine had no legal power over its assets."

Changes to the earned income tax credit for the 2022 filing season- IRS:

More workers without qualifying children can qualify for the EITC, and the maximum credit amount is nearly tripled for these taxpayers this year. For the first time, the credit is now available to both younger workers and senior citizens. There is no upper age limit for claiming the credit if taxpayers have earned income.

The EITC is generally available to workers without qualifying children who are at least 19 years old with earned income below $21,430 for those filing single and $27,380 for spouses filing a joint return. The maximum credit for taxpayers with no qualifying children is $1,502. There are also special exceptions for people who are 18 years old and were formerly in foster care or are experiencing homelessness. Full-time students under age 24 don't qualify.

Ranking Corporate Income Taxes on the 2022 State Business Tax Climate Index - Janelle Cammenga, Tax Policy Blog. "Unlike other studies that look solely at tax burdens, the Index measures how well or poorly each state structures its tax system. It is concerned with the how, not the how much, of state revenue, because there are better and worse ways to levy taxes. Our corporate tax component, for example, scores states not just on their corporate tax rates and brackets, but also on how they handle net operating losses, whether they levy gross receipts-style taxes (which are more economically harmful than corporate income taxes), whether businesses can fully expense purchases of machinery and equipment, and whether states index their brackets for inflation, among other factors." 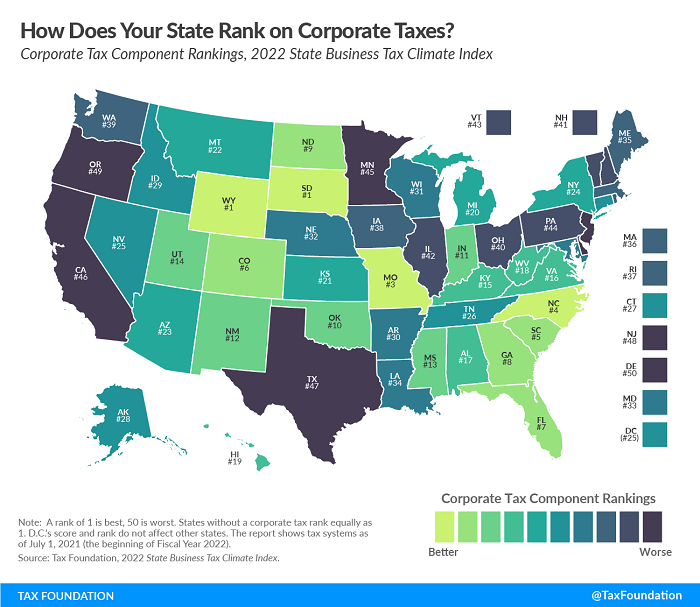 Make sure you claim your charitable tax deductions, on Form 1040 or Schedule A - Kay Bell, Don't Mess With Taxes:

The Tax Gap’s Many Shades Of Gray - Janet Holtzblatt and Steven Rosenthal, TaxVox. "IRS research reveals important sources of noncompliance and sheds light on the amount of unpaid taxes that could be collected under current law. But aiming to reduce the tax gap by a particular percentage or amount could result in potentially perverse incentives. For example, the IRS could meet the target simply by encouraging examiners to accept aggressive positions adopted by sophisticated taxpayers."

The defendants also attempted to claim child care deductions for payments made to a provider that doesn’t exist. In one instance, a taxpayer’s return claimed nearly $10,000 in unreimbursed employee business expenses that the taxpayer knew nothing about. And some taxpayers reported that their returns were prepared by one member of the group but signed by a different return preparer.

This case alleges some common signs of shady tax prep, including mystery deductions and returns filed without a preparer signature or preparer ID number - "ghost preparers." For taxpayers who might say "who cares, as long as I get a big refund!" it's not so simple. From the memorandum and order granting the injunction:

The order discusses some of the returns by name, including a doorman. These taxpayers now have to pony up thousands of dollars in back taxes. Whatever they paid to get their returns prepared was only a start.

A festive day indeed. Today of course marks Mardi Gras, but it is also National Pancake Day, National Pig Day, Share a Smile Day, and National Peanut Butter Lovers Day. I will smile as I apply peanut butter to my pancakes.