The Internal Revenue Service today reminded those with income from a farming or fishing business they should file and pay their entire tax due on or before Tuesday, March 1, if they did not make estimated tax payments.

Taxpayers can pay from their bank account using their Online Account or they can schedule payments in advance using IRS Direct Pay.

Farmers and fishers who decided to forgo making estimated tax payments have the option to pay the entire tax due on or before March 1. Normally, this special rule applies when income from farming or fishing made up at least 2/3 of the total gross income in either the current or the preceding tax year. Those opting to file by the regular April 18 deadline should have made an estimated tax payment by January 15 to avoid an estimated tax penalty. For more information on estimated tax, see Publication 505, Tax Withholding and Estimated Tax.

The 2/3 of gross income requirement can trip up unwary taxpayers with significant non-farm income. This is particularly likely when the taxpayer has significant K-1 income. For example, shareholders of community bank S corporations are often farmers, and "gross income" from the K-1 can be significantly higher than the net taxable income.

The March 1 deadline is a quaint throwback to a time before precision GPS planting and $15,000 per acre farmland. Between waiting on K-1s and regular delays and corrections in investment account 1099s, March 1 filing is becoming harder. This is why more farmers are taking advantage of the option to instead make all of their estimated tax payments in January, enabling them to file their returns in April or on extension without incurring estimated tax penalties.

“No biometric data — including facial recognition — will be required if taxpayers choose to authenticate their identity through a virtual interview,” the IRS said in a statement.

Video selfies uploaded through ID.me by taxpayers will be “permanently deleted” over the next few weeks, the agency said.

IRS Statement — New features put in place for IRS Online Account registration; process strengthened to ensure privacy and security - IRS. "Taxpayers will still have the option to verify their identity automatically through the use of biometric verification through ID.me’s self-assistance tool if they choose. For taxpayers who select this option, new requirements are in place to ensure images provided by taxpayers are deleted for the account being created. Any existing biometric data from taxpayers who previously created an IRS Online Account that has already been collected will also be permanently deleted over the course of the next few weeks."

IRS account facial ID still an option, but no longer required - Kay Bell, Don't Mess With Taxes. "The tax agency, which earlier this month said it would end the controversial validation system used by contractor ID.me, says IRS agents now will verify you are you via a live, virtual interview."

One of those recommendations was to gradually increase the share of wages that are covered by Social Security payroll taxes, the program's chief funding source, which is indexed for inflation each year and currently sits at $147,000 for 2022. Wages up to that limit are taxed at 6.2 percent, paid both by the employee and employer.

The tax already isn't keeping up with benefit payments and is falling farther behind as the retiree population increases. So despite a $2.8 trillion trust fund reserve, starting in about 11 years beneficiaries will need to take a substantial haircut without fixes.

Zachary Goldman, a partner at Wilmer Cutler Pickering Hale and Dorr LLP, whose practice focuses largely on fintech, cryptocurrency and distributed ledger technology, notes that these cryptocurrency codes, also called keys, can be lost. That could mean the digital assets become permanently inaccessible with no hope of recovery.

“If the executor doesn’t know where the keys or passcodes for assets held in a self-hosted wallet are stored, and the decedent hasn’t left instructions, those funds are gone,” Goldman said.

However, for reasons having to do with both the desire to avoid exchange fees and motives that go to the very nature and allure of cryptocurrency, many cryptocurrency investors prefer to hold their IRA's cryptocurrency in a noncustodial wallet, maintaining exclusive control of their private key.

This could result in the crypto assets being effectively held by the IRA owner, not the trustee, destroying the IRA tax benefits.

Avoid Crypto Tax Headaches: What You Need to Know if You Bought or Sold Crypto in 2021 - Megan DeMatteo, Coindesk. "Investors have to pay capital gains on any profits resulting from the sales or trades of stocks or assets. Each and every time an investor trades bitcoin for ethereum, or exchanges crypto back to U.S. dollars, those transactions – no matter the size – technically involve the exchanging of assets."

The US has a 21% corporation tax rate, though that does not include state corporate taxes. 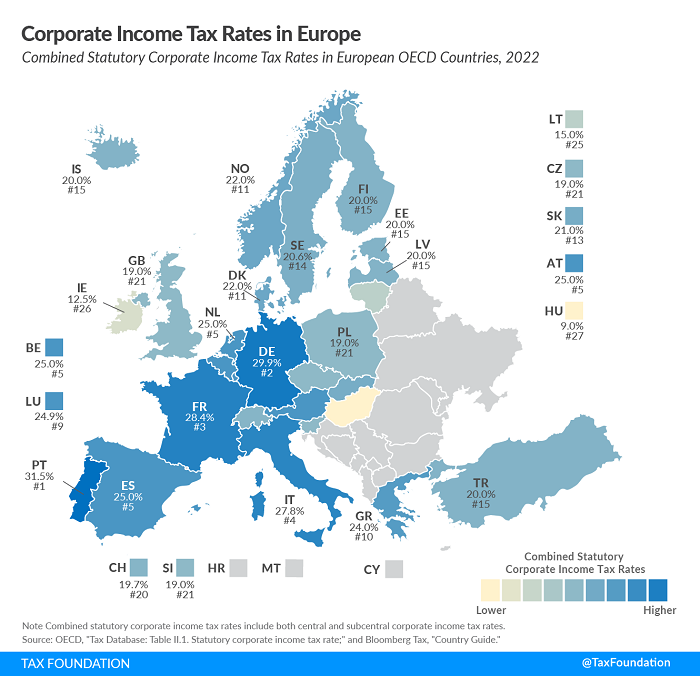 Nebraska Revises Inheritance Tax; and Substantiating Expenses - Roger McEowen, Agricultural Law and Taxation Blog. "In 1895, Illinois was the first state to adopt a progressive inheritance tax on collateral heirs (an heir that is not in a direct line from the decedent, but comes from a parallel line.  The law was challenged as a violation of equal protection under the Constitution, but was upheld in 1898 in Magoun v. Illinois Trust and Savings Bank, et al., 170 U.S. 283 (1898).  As a result of the court’s decision, Nebraska adopted a progressive county-level inheritance tax in 1901.  The state’s inheritance tax system has changed little since that time.  Presently, Nebraska is the only state that uses the tax as a local government revenue source."

Preamble to Recent U.S. Regs Attacks Destination-Based Taxes - Carrie Brandon Elliot, Tax Notes Opinons. "The new regs make clear that income arising from services must be sourced based on where the services are performed and that reasonable principles do not include determining the place of performance based on the service recipient’s location. Foreign withholding taxes on income from services not performed in the foreign jurisdiction isn't consistent with an income tax in the U.S. sense and won't qualify for an FTC under section 901." FTC = foreign tax credit. Interesting, as that U.S. states increasingly apportion service revenue based on the service recipient location.

Are Increased Audits and IRS Enforcement on the Horizon? - Jon Osborn, TaxBuzz. "Though the Build Back Better bill has not yet passed and its future remains unclear, increased audits and enforcement are definitely a possibility. Now is the time for wealthy individuals and corporate management to review their tax plans and filings in order to ensure that they are in compliance."

10 Items to Check Off Your Annual Financial Checklist - Fin Powered Female. "If you contribute a percentage of your income to your employer provided retirement account or are contributing to an IRA, I want you to revisit what you are contributing on an annual basis and ask yourself some thought provoking questions like: Do I have room to contribute more? If I receive a bonus this year, what percentage will go to my retirement account? What would my paycheck look like if I chose to contribute 1, 2 or 3% more?"

In 2013, Taxpayer agreed to pay William “Rick” Singer $220,000 to facilitate his son’s admission to USC as a purported water polo recruit. The scheme involved presenting Taxpayer’s son to USC’s subcommittee on athletic admissions using a water polo profile that included fabricated credentials, awards and swim times. After Taxpayer’s son was accepted to USC, Taxpayer wired $100,000 to Singer’s sham charity, the Key Worldwide Foundation (KWF), $100,000 to Singer’s company, The Key, and $20,000 directly to Singer. Taxpayer paid the bribe from the corporate account of his private investment firm and falsely deducted part of it as a business expense and the remainder as a charitable contribution. Additionally, in 2018, Taxpayer agreed to pay Singer $1.5 million to secure the admission of his twin daughters to Harvard University and Stanford University as purported athletic recruits.

The moral? Don't pay personal expenses out of a business account, and especially don't deduct them. The IRS has learned to look for that thing in recent centuries. Also, while paying your kids' college costs may seem like charity, it's not deductible.

There is always something to celebrate. Today, for example, is Supermarket Employee Day, a day to honor the unsung heroes who kept the shelves stocked while many of us worked from home. It's also Be Humble Day, for those of us with much to be humble about. Oh, and it's the 42nd anniversary of this.