As of February 14, 2022, the IRS website reports that “all paper and electronic individual refund returns received prior to April 2021 have been processed if the return had no errors and did not require further review.” By implication, that means returns filed as far back as April of last year are still awaiting processing. That is now ten months ago and counting, and if IRS systems detect any discrepancies and issue a math error notice with respect to a return, the taxpayer likely will end up waiting more than a year to receive any refund due. 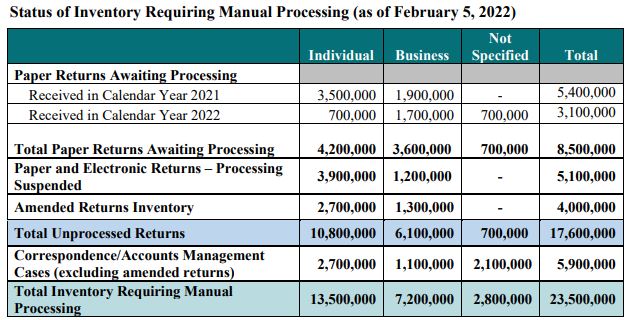 The Taxpayer Advocate is an independent office within the IRS tasked with looking after taxpayer interests. Her testimony recommended some short-term steps:

Collins, testifying before the Senate Finance Committee, said the service needs to focus on its core mission of improving taxpayer service and protecting taxpayer rights as it deals with a backlog of millions of unprocessed tax returns and looks to avert a 2022 filing season disaster.

Finance Committee Looks to Bring IRS Tech Out of the Dark Ages - Benjamin Guggenheim, Tax Notes ($). "Insisting that problems with the agency’s decades-old infrastructure ripple through to refund processing and customer service, Wyden cited testimony by Collins that the IRS has 60 different computer systems that are unable to communicate with each other."

Tax Filing Deadline Delay Raised at Senate hearing - Jay Heflin, Eide Bailly. "The answer from witnesses was a resounding ‘no.’"

The IRS Is In The Headlines. That Is Not A Good Thing - Howard Gleckman, TaxVox. "All this is happening while an ever-parsimonious Congress keeps giving the agency more to do with ever-insufficient resources. Manage compliance with the Affordable Care Act. Distribute economic impact payments to more than 175 million households. Do it three times in less than two years. At nearly the same time, create a system for distributing monthly Child Tax Credits to the parents of 61 million children under one set of rules. Then, due to congressional inaction, apply different rules and stop paying monthly."

The IRS, faced with an epic backlog of unprocessed paper returns and other submissions, has announced that its Austin, Texas, processing center will remain open, reversing prior plans to consolidate all paper processing to two sites nationwide.

The agency will also be adding a second “surge team,” in addition to the 1,200 employees recently announced by IRS Commissioner Charles Rettig, to provide assistance with the inventory challenges, National Taxpayer Advocate Erin Collins said at a February 17 Senate Finance Committee hearing.

IRS, stuck in backlog of tax returns, scraps plan to close major processing facility - Jacob Bogage, Washington Post ($). "Closing the Austin facility, according to the inspector general, would have seriously hindered the IRS’s ability to handle its paperwork and led to a significant drawdown in the agency’s workforce."

The measure would allow the net income subject to the state's entity-level tax to be exempt from personal and corporate income tax in an effort to help pass-through entities avoid the effects of the $10,000 federal cap on state and local tax deductions, according to the bill's fiscal note. The proposal would also allow pass-through entities to annually elect to pay an income tax at the entity level for a tax year.

That legislation is now on its way to Lujan Grisham's desk for her signature.

The bill includes the pass-through tax noted in the above item. Partnerships and S corporations with multi-state activities should consider these elective taxes now; some require elections by March 15.

Since an omnibus spending bill is one of the few must-pass pieces of legislation considered each year by both chambers, it is typically a target for tax provisions, particularly the annual collection of recently expired tax breaks known as extenders.

Many of the extenders are in the form of energy tax credits, and Senate Finance Committee Chair Ron Wyden, D-Ore., told Tax Notes February 10 that whether some of those credits wind up in the omnibus bill or in a rewritten Build Back Better Act (H.R. 5376) will be determined as events unfold.

Besides the 41 tax provisions that expired December 31, 2021, there is likely to be a push to include a rollback of the five-year amortization for research and development expenses that went into effect January 1.

The article does not mention an extension of the Employee Retention Credit, which has been pushed by some groups.

Schumer and the White House have also given in to the reality that the Build Back Better Act is stalled. While Schumer and other Democrats continue to negotiate with Sen. Joe Manchin (D-W.Va.) behind-the-scenes in a bid to find some sort of compromise on Biden’s top legislative priority, this actually allowed the two parties to reach a deal on a topline number for the FY 2022 spending bills. Democrats’ push to pass BBB had been the biggest impediment to such a bipartisan agreement. House and Senate appropriators are now rushing to put together an omnibus spending package by the new government funding deadline of March 11. That package will include billions of dollars in earmarks for lawmakers in both chambers, an added bonus heading into November.

The Omnibus may include the extension of some expired provisions. It's also a potential vehicle for addressing the law that now requires R&D expenses to be capitalized and amortized, rather than deducted as incurred.

Rising Prices Fuel Discussions on Future of the Federal Gas Tax - Kelly Phillips Erb, Bloomberg. "If the tax had automatically been adjusted for inflation, it would come in at 36 cents per gallon—nearly twice as much as it is today, though the rate would be predictably unpopular. But, as the Government Accountability Office has noted, new revenues from users can come only from taxes and fees. Something, it would seem, has to give."

IRS Issues FAQ Guidance And Additional Relief For Pass-Through Entity Returns - Amber Gray-Fenner, Forbes. "What can be gleaned from the guidance is that in the absence of knowledge that the information will be needed by a partner or shareholder, the PTE return preparer can, if the entity meets the other requirements, leave Schedules K2 and K3 off of the PTE return (at least for this year). Nevertheless, depending on the entity, the preparer should be prepared to provide the K2/K3 information if requested by a partner or shareholder. The FAQ is also clear that if the preparer has prior knowledge (i.e., knows before the PTE return is filed) that a shareholder or a partner will need the information provided on Schedules K2 and K3 that relief is not available and the new schedules must be included with the PTE return."

IRS Provides 2021 K-2 and K-3 Filing Relief for Certain Domestic S Corporations and Partnerships - Wolters Kluwer Tax & Accounting. "In response to concerns expressed by tax professionals and others, the IRS has issued FAQ 15 providing an "additional exception" for the 2021 tax year to filing the Schedules K-2 and K-3 for certain domestic partnerships and S corporations. If a partnership or S corporation qualifies for this exception, the entity is not required to file Schedules K-2 and K-3 with the IRS or with its partners or shareholders."

IRS: On Third Thought, Let’s Grant “Relief” That Isn’t - Russ Fox, Taxable Talk. "I do not want my clients to face draconian penalties.  Battling 'reasonable cause' has been an adventure and I don’t think it will get better given that the IRS is drowning in paper."

New phishing scam targets tax pros, but everyone needs to be on guard - Kay Bell, Don't Mess With Taxes. "The IRS says it has seen similar bogus emails that claim to be from a "tax preparation application provider." The scam email will send users to a website that shows the logos of several popular tax software preparation providers. Clicking on one of these logos opens a pop-up window and a request that the tax preparer enter account credentials. If the tax pro scam target complies, crooks use this information to file fraudulent returns by using the legitimate authorizations."

Gifting to Help Adult Children with Retirement Planning - Eve Zurakowski, Tax Warrior Chronicles. " The annual gift exclusion in 2022 has increased to $16,000 (per recipient) for gifts made by an individual, and $32,000 for gifts made by a married couple who agree to “split” their gifts. Gifting up to these amounts to a retirement plan for children or grandchildren could jumpstart the earnings on their investments."

How To Write Off Legal Fees On Your Taxes - Robert Wood, Forbes. "Since 2018, it’s been tougher to deduct legal fees, and some plaintiffs in contingent fee cases are taxed on their gross recoveries, not net after legal fees. Some call it a new tax on legal settlements. Being creative is needed in this new age, since sometimes the rules seem to say you shouldn’t be deducting them at all. Checklists of ways to deduct legal fees cam help. Fortunately, though, the mechanics of deducting legal fees in employment, whistleblower and civil rights cases have been improved, at long last."

How a Low Income Tax Clinic Can Help You and Vice Versa - Keith Fogg, Procedurally Taxing. "LITCs represent individuals, not entities, who make less than 250% of the federal poverty guidelines and have a tax controversy with the IRS.  In 2022 that amount is $33,975 for a single person living alone...  You can find the LITC nearest you in Publication 4134.  In addition to finding their location, I encourage you to get to know the director of the LITC in order to find out how to best make referrals and, if desired, how to volunteer."

The WSJ Tax Guide 2022: What to Know Now About Tax Filing and Refunds - Wall Street Journal ($):

In a historic move, Congress had the IRS prepay a portion of the expanded credits in monthly installments during 2021. While this change put cash in the pockets of many families, it will shrink refunds many filers are anticipating, as well.

These unique challenges will complicate a process that is already profoundly confusing to millions who have to comply with it—for good reason. Now over 100 years old, the tax code is encrusted with layers of interacting provisions that shift slightly when some parts of it but not others are adjusted for inflation annually.

If you are a WSJ subscriber, this is a great plain-language overview for tax season.

They argued that the government had no legal authority to collect the taxes since the U.S. Constitution from 1789 was illegally replaced in 1879. He claimed to have been investigating a “criminal element within the government,” which he thought remained beholden to a European cartel. He also called the Justice Department a “terrorist organization.” The Browns stopped showing up midway through their trial and were sentenced to 63 months in absentia.

The Browns refused to surrender to federal authorities and holed up at their New Hampshire residence, which was fortified with a cache of weapons, booby traps, and explosives. Brown made violent threats toward government officials attempting to arrest them. Brown was eventually captured in October 2007 by undercover U.S. marshals.

I don't think the "trigger-happy" part of the headline is right, as they didn't shoot anybody. But that's about the only thing they did right with their taxes. 25 years in federal prison is a poor result.

The board concluded in Hall of Heroes Super Hero Museum Inc. v. Elkhart County Assessor that the museum failed to show that it is predominately used for educational or charitable purposes, finding that the property is taxable. The decision, dated January 7, was released February 14.

Everybody could use a recharge on Friday. Fortunately, today is National Battery Day! But if you've had it with the week already, it's also National Drink Wine Day.