The IRS is considering all options in tackling a backlog of unprocessed tax returns, including further suspensions of compliance notices and shifting personnel from other functions, according to an agency official.

“Nothing is really off the table,” Paul Butler of the IRS Small Business/Self-Employed Division said February 2 at the American Bar Association Section of Taxation virtual meeting.

This comes on the heels of yesterday's piece in the Washington Post by former Taxpayer Advocate Nina Olson calling on the IRS to suspend most examination activity and shift personnel to processing backlogged returns and correspondence.

Butler's comments followed the IRS announcing on Jan. 26 the suspension of notices in cases when it has credited taxpayers for payments but lacks any record of the return having been filed. In many cases, the agency said, the return may be part of its paper inventory and not processed.

National Taxpayer Advocate Erin Collins sounded an alarm in a recent report about the IRS bringing millions of unprocessed returns and pieces of taxpayer correspondence into the filing season. She said return processing and refund delays could be as bad or worse in 2022 for taxpayers who don't file returns electronically or fail to correctly reconcile their monthly advance child tax credit payments or their third stimulus payments with 2021 returns.

Organizations and lawmakers have pushed for relief for taxpayers. More than 200 members of Congress said in a letter that the IRS should halt automated collections and take other steps to provide taxpayer relief and reduce a tax return backlog in the filing season.

Taxpayer Relief Still Caught In Tug Of War Between Congress And The IRS - Amber Gray-Fenner, Forbes:

Clearly, there is plenty of blame to go around. Congress passes laws without fully understanding “the implementation bits” and they have been underfunding both the operations and enforcement activities of the IRS for years. Until recently Congress had largely abdicated its IRS oversight role. Perhaps the 88.5% increase in tax account inquiries directed to members of Congress over the last year has something to do with their renewed interest in IRS operations. Nevertheless, in response to the additional Congressional scrutiny the IRS remains obstinately enforcement biased even when relaxing certain enforcement efforts could free up resources that could then be reallocated to other problem areas. Indeed at times the IRS seems completely oblivious to the fact that providing even a portion of the requested relief would also reduce the workload for the employees tasked with processing the mail and answering the phones. Meanwhile, taxpayers are (as usual) caught in the middle, many at the end of their rope, and there’s no relief in sight.

Senator Ben Ray Luján (D-N.M.) suffered a stroke on January 27th. And while he is expected to make a full recovery, his return to the Senate is largely unknown. However, it is expected that he will not return before the president gives his speech to the nation, according to sources who have experience with people who have suffered strokes.

His absence in the upper chamber means that Democrats do not have the votes to pass the tax and spending bill, which stalled in the Senate after Senator Joe Manchin (D-W.Va.) said in December that he could not support the legislation as currently written.

Build Back Better Talks Reset but Without a Deadline This Time - Doug Sword, Tax Notes ($):

The chair of the House’s taxwriting committee sees an opportunity for a relaunch of his party’s reconciliation bill following a flap over Sen. Joe Manchin III, D-W.Va., first saying the legislation was “dead” and then retracting the comment.

And none of the reported deadlines for rebooting the Build Back Better Act (H.R. 5376) — whether on the heels of a February 18 spending bill, in time for President Biden’s March 1 State of the Union address, or before Congress’s mid-April Easter break — are likely to have much impact on the pace of talks, both House Ways and Means Chair Richard E. Neal, D-Mass., and Senate Finance Chair Ron Wyden, D-Ore., said in separate interviews.

Manchin says Build Back Better is 'dead.' Here's what he might resurrect. - Sahil Kapur and Benjy Sarlin, NBC News:

Manchin said he would support a corporate tax rate hike to 25 percent, a 15 percent corporate minimum tax, a 28 percent capital gains tax “all in,” an elimination of “tax loopholes such as carried interest” and higher rates for the wealthy.

Whatever problems Manchin has with BBB, it wasn't the tax cuts. That's Senator Sinema's thing.

Legislation designed to increase cannabis businesses’ access to banking services is on track to pass the House again — this time as part of a wide-ranging trade and manufacturing bill that would also extend the health coverage tax credit.

Many cannabis businesses are unbanked, operating on a cash-only basis and paying federal and state taxes in cash and only at designated offices where the tax authorities can accept it — roadblocks that most other legal businesses don’t face. Proponents argue that increased access to banks would lead to less reliance on cash, improving public safety and increasing tax compliance for those businesses.

Despite bipartisan support for the measure in the House, the SAFE Banking Act has yet to receive a vote in the Senate.

It's not easy to comply with the tax law cash-only.

Related: Pay Your Taxes With Cash.

Under proposed rules, large companies could benefit from domestic tax breaks until their rates got down to 15%. Below that threshold, other countries could impose what is known as a “top-up tax” on those companies and make up the difference.

Ill. Gov. Proposes Food And Gas Tax Cuts, Renewing Biz Credit - Maria Koklanaris, Law360 Tax Authority ($). "For businesses, Pritzker's budget would provide grants to small businesses and suspend licensing fees for restaurants and bars. The governor also called on the Illinois General Assembly to renew the state's signature corporate tax credit, the Economic Development for a Growing Economy, or EDGE, credit. EDGE provides a nonrefundable income tax credit that is equal to 50% of the income tax withholdings for new jobs created in Illinois. The credit increases to 75% if the project meets certain criteria."

Governor says Iowa’s corporate tax rate an outlier that needs to be cut - O. Kay Henderson, Radio Iowa. "'When we talk about the corporate tax rate, we are tied for third highest in the nation — 9.8% is our tax rate,' Reynolds said late this morning. 'Illinois, California, New York are lower than Iowa.' Reynolds did not mention cutting income taxes for corporations when she unveiled her tax plan during her Condition of the State Address in January."

National Debt Hits A High, States Advance More Tax Cuts - Renu Zaretsky, Daily Deduction. "Idaho Senate passes a $600 million tax cut, the largest in state history. The GOP-led chamber passed the package along party lines. Drawing on funds from the state’s $1.9 billion surplus, the plan would reduce income and corporate tax rates and offer income tax rebates to most taxpayers. Gov. Brad Little, who outlined the plan in January, is expected to sign it into law." 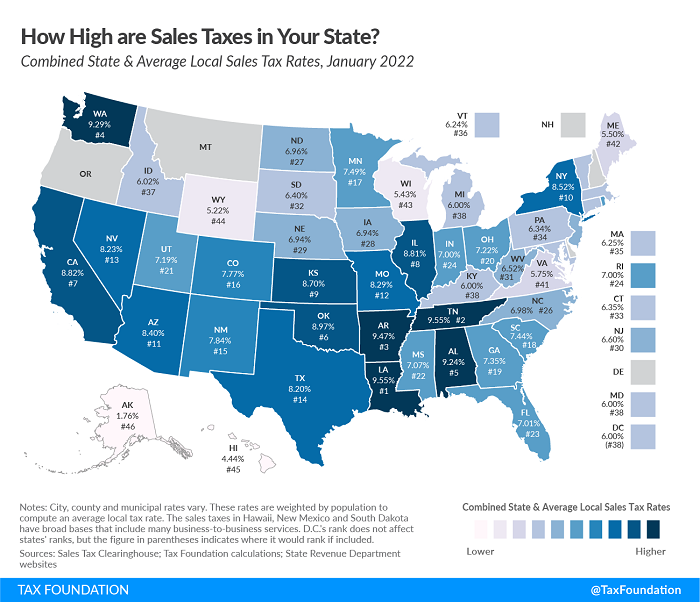 Made a tax return mistake? Fix it by X-filing an amended return - Kay Bell, Don't Mess With Taxes. "If you wait for the IRS to find the error, be it mere months or many years later, the accrued tally could be dramatic. But if you catch and fix the unpaid tax mistake first, your Form 1040X filing will stop those added charges as soon as the IRS gets the corrected information."

The Stuff That Dreams Are Made Of – The Rise And Fall Of Malta Pension Plans - Andrew Gradman, Your Tax Matters Partner. "When the IRS dropped its guidance, it was like watching a chess game played in a sitcom, where one player is “beating” his opponent, only to be shocked when his opponent suddenly announces checkmate.  There is no such thing as a mate-in-one in serious chess. I thought the same was true of tax planning. Apparently I was wrong." With bonus reference to the mythical tax fairy.

Separate Business and Personal Bank Accounts – Better Now Than Later! - Tax Warrior Chronicles. "By using a separate bank account, you can track business profits and expenses without comingling them with personal banking activity. Flagging or separating business activity in retrospect in your personal account or for a significant prior period can be tedious and overwhelming. You may miss important tax-deductible expenses or revenue recognition options. This can lead to inaccurate bookkeeping."

Estate Planning and Cryptocurrency - Freeman Law. "The pseudonymous nature of cryptocurrencies creates unique challenges for estate planning. First, given that cryptocurrencies stored in a wallet do not have personally identifying information, the assets will essentially die with the decedent if he or she fails communicate such assets exist."

A Guide to Completing Your Organizer This Tax Season - Jody Padar, Bloomberg. "If you take the time to prepare your tax organizer thoroughly, it will eliminate much of the back and forth between you and your tax adviser. You may think you’re saving time by leaving these questions unanswered, but you aren’t."

I became a U.K. citizen in 2010. It was never a question to be a dual citizen then, because I had an American childhood and a British adulthood. Dual citizenship felt like the normal and natural thing for me personally to have.

It was through learning about FATCA that it started to sink in. This was going to be a big problem going forward. I had all these different filings, and some data transfers, and things going on that were beyond me.

A jailed tax shelter promoter’s own tax planning device failed because of his casual treatment of legal requirements and “grotesque conflict of interest,” resulting in a $10.5 million deficiency, the Tax Court ruled.

Larson and two other individuals, Robert A. Pfaff and David Amir Makov, promoted and funneled profits from a tax-advantaged investment known as a bond linked issue premium structure (BLIPS) into an S corporation linked to an employee stock option plan. The ESOP owned 5 percent of the S corporation’s stock but was allocated 100 percent of its income in 1999 and 2000.

From the Tax Court opinion:

Accordingly, we hold that the Morley stock was not subject to a substantial risk of forfeiture under section 83, and we sustain respondent's determination on this matter.

A wise man has a saying that covers this case: "Execution isn't everything but it's a lot." Even the best tax planning (and this wasn't) will fail if you don't take care to get the paperwork right.

Birds! Today is Feed the Birds Day. For some of us, that's every day once work-at-home started.