Programming note: Eide Bailly offices are closed tomorrow and Friday for the Thanksgiving holiday. We will be back Monday. Have a great Thanksgiving!

The Supreme Court on Tuesday cleared the way for a congressional committee to examine Donald Trump’s tax returns, denying without comment the former president’s last-ditch effort to extend a legal battle that has consumed Congress and the courts for years.

It was unclear when the Treasury Department will turn over the documents — a spokesman said only that the department would comply — but time is not on the side of Democrats who run the committee, who will cede control to Republicans in January as a result of the recent midterm elections.

There's a good chance that the returns will get to the committee before the refund you claimed last summer gets to you.

Supreme Court declines to shield Trump tax returns from Congress - Rebecca Beitsch, The Hill: "Federal law mandates that tax returns are generally confidential unless an exception applies, one of which includes a written request by the House Ways and Means Committee. The issue in Trump’s litigation in large part turns on whether this exception is constitutional."

Observers of estate tax data say the surge may be attributable to the COVID-19 pandemic, but that is uncertain because of the relatively small number of larger estates, which drive many of the annual trends. Estate tax filings must be made within nine months of the decedent’s death, although an automatic six-month extension and further extensions are available.

“The lag is kind of strange and hard to figure out,” said Scott Hodge of the Tax Foundation, adding that “as a rule of thumb,” most of the deaths occur in the year before the filing.

I suspect that the increase in filings is partially attributable to "portability election" returns. These are returns for estates below the tax threshold that are filed preserve the deceased spouse's unused lifetime exemption for the surviving spouse to use.

Related: The Time to File the Portability Election has been Extended to Five Years.

The Ninth Circuit denied a petition for a panel rehearing and a rehearing en banc on November 22 in Moore v. United States. But the denial was accompanied by a vociferous dissent from Judges Patrick J. Bumatay, Sandra Ikuta, Consuelo Callahan, and Lawrence VanDyke, who would have granted the rehearing to consider a limiting principle on an unapportioned direct tax on unrealized income.

“We open the door to expansion of the federal taxing power beyond the limits placed by the Constitution. Indeed, without a realization requirement, it is hard to see what’s left of the constitutional apportionment requirement,” Bumatay wrote. “Now, I fear, any tax on property or other interests can be categorized as an ‘income tax’ and elude the requirement of apportionment. While the Sixteenth Amendment expanded the federal government’s taxing power, it did not dissolve other constitutional restrictions” (emphasis in original).

During the discussions of the "Build Back Better" tax plan over the past two years, taxes on unrealized capital gains and wealth taxes were proposed.

Like any other deduction claimed on a tax return, a taxpayer should keep contemporaneous documentation to substantiate the donation. Taxpayers need to keep records that demonstrate the amount donated, the date, and the name of the recipient. Depending on the amount and type of donation, taxpayers must satisfy very specific requirements to be entitled to a deduction for a charitable contribution, per IRC § 170. For donations of $250 or more, taxpayers must have a written acknowledgement from the receiving organization before they file their tax returns. The document must contain the amount of cash or a description of the property donated, a statement that the organization did not provide any goods or services in exchange, or if there were, there must be a good-faith estimate of the value of those goods and services, per IRC § 170(f)(8). Donations of property may also require a taxpayer to have an appraisal.

Requiring taxpayers to affirmatively disclose “contrary authorities” for their uncertain tax positions would impose a significant burden on taxpayers and is inconsistent with existing law and IRS policy, tax advisers say.

“Neither the Code nor the regulations affirmatively require a taxpayer to disclose authorities in support of or against its position,” attorneys from McDermott Will & Emery noted in their November 14 comment letter (emphasis in original). “There is no express authority that allows the Service — via tax forms and instructions and in the absence of statutory or regulatory support — to require such disclosure.”

Ranking State Tax Systems: Corporate Taxes - Janelle Fritts, Tax Policy Blog. "Unlike other studies that look solely at tax burdens, the Index measures how well or poorly each state structures its tax system. It is concerned with the how, not the how much, of state revenue, because there are better and worse ways to levy taxes. Our corporate tax component, for example, scores states not just on their corporate tax rates and brackets, but also on how they handle net operating losses, whether they levy gross receipts-style taxes (which are more economically harmful than corporate income taxes), whether businesses can fully expense purchases of machinery and equipment, and whether states index their brackets for inflation, among other factors." 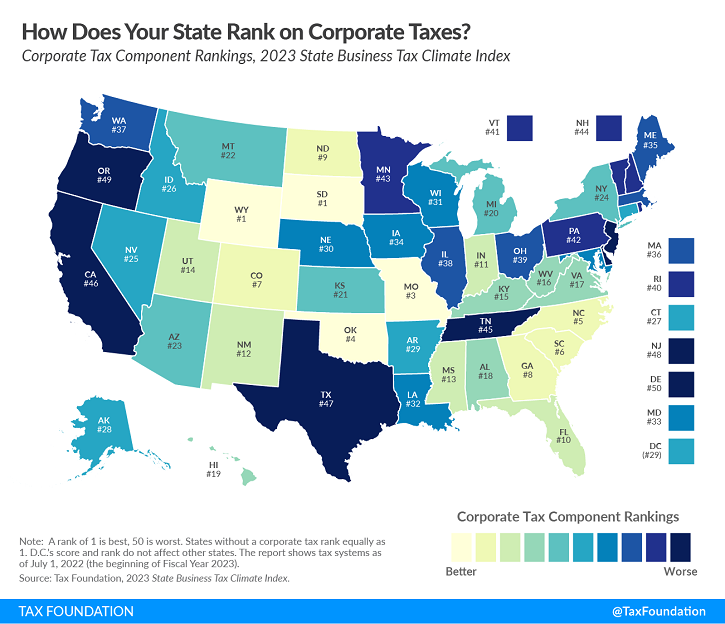 The importance of the correct amount of tax withholding - National Association of Tax Professionals. "The IRS’s tax withholding estimator, also available in Spanish, can help taxpayers determine if too much income tax is being withheld and show them the adjustments that can be made to put more cash into their own pocket. In other cases, it can help them see that they should increase their withholding or make an estimated tax payment to avoid a tax bill when they file next year."

Tax Attorneys Indicted for Fraudulent Tax Shelter and Related Conduct - Jack Townsend, Federal Tax Crimes. "Most importantly, the IRS did a sting operation and got some damning information and admissions."

Tax Issues Associated with Easement Payments – Part 2 - Roger McEowen, Agricultural Law and Taxation Blog. "Rural landowners are facing easement issues not infrequently.  Oil and gas pipelines, wind energy towers, and high voltage power lines are examples of the type of structures that are associated with easements across agricultural land.  Seeking good tax counsel can help produce the best tax result possible in dealing with the various types of payments that might be received."

Why Aren’t Kids A Higher Priority For Congress? - C. Eugene Steuerle, TaxVox.  "While both political parties over time have supported both the CTC and the EITC, each also resists expansions to different households. Republicans resist full refundability for those with no earnings, which they believe discourages work by parents. Democrats, by contrast, are reluctant to extend credits to higher-income taxpayers."

Donald Bender — who filed taxes for Trump companies, executives and family members for decades — testified Tuesday in New York state court that he had no idea about the alleged tax fraud schemes at the Trump Organization and that he would have been shocked to learn that executives were receiving Christmas bonuses via tax forms intended for independent contractors.

"I probably would have had a heart attack," Bender told prosecutor Susan Hoffinger when asked how he would have responded to seeing an internal spreadsheet laying out how executives, including ex-chief finance officer Allen Weisselberg and chief operations officer Matthew Calamari Sr., were paid not for consulting but as a mechanism to cut bonus checks without paying payroll taxes.

I don't think he means a happy heart attack.

Donald Trump reported losses on his tax returns every year for a decade, including nearly $700 million in 2009 and $200 million in 2010, his longtime accountant testified Tuesday, confirming long-held suspicions about the former president’s tax practices.

Bender testified that he put the onus on Weisselberg to fix any problems as scrutiny of the Trump Organization intensified after Trump’s election in 2016 and advised him to stop one dubious practice: the company’s longstanding, tax-saving habit of paying executive bonuses as freelance income.

Defendant was a personal injury lawyer with offices in Southfield, Michigan. He also owned a real estate company, First Third LLC, and two medical-related companies, MedCity Rehabilitation Services LLC and Alpha Living LLC. At trial, the evidence proved Defendant did not report substantial income he received from these businesses and deposited into undisclosed Interest on Lawyer's Trust Accounts (IOLTA), bank accounts to be used by lawyers solely to hold money in trust for clients. As a result, Defendant was able to conceal these funds from his tax preparers and the IRS.

Defendant was convicted of filing false personal tax returns for 2012, 2015, and 2018, filing a false 2012 amended return, and filing a false 2015 corporate return for Alpha Living. The evidence established that Defendant did not report approximately $600,000 in income he earned in 2012. He deposited most of these funds into an undisclosed IOLTA account and concealed the deposits from his tax preparer.

This may diminish his legal practice income.

Talk about a Thanksgiving treat. White House Chief of Staff Ronald Klain tweeted out a list of "President Biden's Top Accomplishments" this morning. One of them is a surprise to tax practitioners everywhere: 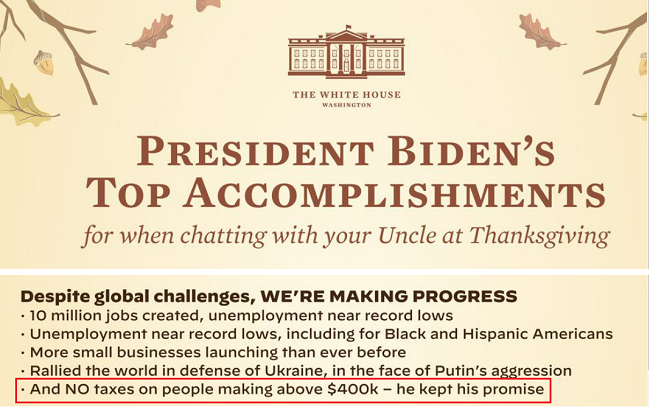 I actually don't think that's quite right. But if it is, my workload is going way down.

Appropriate, considering I haven't even gone to the store for Thanksgiving dinner supplies yet. Today is National Espresso Day. Fuel me up.