Update on IRS Progress in Working Through Its Backlog of Paper-Filed Tax Returns and Correspondence - Erin Collins, NTA Blog:

I look at the numbers and see millions of taxpayers that are still waiting for their returns to be processed. As of October 21, the IRS had about three million individual returns and north of four million business returns awaiting initial processing, as well as about two million amended individual and business returns. In total, it has over 6.3 million returns in suspense, with about two million in unpostable status, 1.1 million processing rejects, a half-million in error resolution, and nearly three million still waiting to be worked for potential identity theft. Most math errors involved reconciliation of the Recovery Rebate Credit or the Child Tax Credit, and through October 10, the IRS had sent nearly 14 million notices mostly concerning those issues. Regardless of the IRS’ definition, none of the above taxpayers will see the IRS as “healthy” until their return is worked.

That means individuals who filed paper Forms 1040, U.S. Individual Income Tax Return, have now been waiting nearly two-thirds of a year to receive their refunds. Individuals who filed returns that were not error-free or that required review may have been waiting even longer. The IRS had north of three million unprocessed individual tax returns that require IRS employee involvement.

Score one for electronic filing.

The IRS has made enormous strides toward modernization across the agency, without which it would have collapsed during the COVID-19 pandemic, former IRS Commissioner Charles Rossotti said November 14 during an Urban-Brookings Tax Policy Center event.

The IRS has brought the electronic filing rate for income tax returns above 90 percent this year, and it’s putting huge amounts of information online — enough to drive hundreds of millions of visits to its website, Rossotti said. The IRS has also demonstrated greater competence in screening for fraudulently filed returns, enough that a few years ago, the Government Accountability Office took the IRS off its list of high-risk federal agencies when it comes to safeguarding data, he noted.

Sirius Apportionment Method OK, Texas Appeals Court Holds - Maria Koklanaris, Law360 Tax Authority ($). "In an opinion issued Thursday, the Texas Third Court of Appeals addressed the one issue outstanding after the Texas Supreme Court sided with Sirius in March in its fight to get a $2.5 million franchise tax refund. In the decision, the Texas justices unequivocally affirmed that Texas law calls for a system of origin sourcing, with the receipts sourced to where the service was performed. It rejected the characterization of the Texas comptroller of public accounts, Glenn Hegar, who maintained that sourcing of receipts "performed in Texas" should be based on where the 'receipt-producing, end-product act is done.'"

The letters were in response to a New York Times report on Sunday that said former White House Chief of Staff John Kelly claimed Trump asked for the IRS and the U.S. Department of Justice to examine Clinton, Bezos and the two FBI officials, along with former FBI Director James Comey and former Deputy Director Andrew McCabe, who were part of a high-profile probe into Trump's campaign ties to Russia.

To be sure, it's not an entirely suspicious that taxpayers at with income like Ms. Clinton, and especially like Mr. Bezos, get selected for audit.

Report of Trump’s IRS Targeting Prompts W&M Ire - Doug Sword, Tax Notes ($). "Former White House Chief of Staff John Kelly told the Times that among those Trump said “we ought to investigate” and “get the IRS on” were former FBI Director James Comey and his deputy, Andrew McCabe. Comey’s and McCabe’s tax returns were reviewed, in different years, as part of the IRS’s National Research Program, an annual effort by the agency to use 10,000-plus specialized audits to study compliance problems and better determine how to use resources."

Illinois Adopts Permanent Filing Extension for Corporate Filers - Benjamin Valdez, Tax Notes ($). "The rule, published November 14 in Issue 46 of the Illinois Register, clarifies that corporations are allowed an automatic seventh-month extension to file state income tax returns for tax years ending on or after December 31, 2021. Noncorporate taxpayers will be allowed an automatic six-month extension, and fiscal-year filers who are eligible for a federal extension will be allowed an eight-month state extension."

IRS criminal investigators ramp up crypto tax evasion cases - Kay Bell, Don't Mess With Taxes. "Jim Lee, head of the IRS Criminal Investigation division, said during a press call last week that the agency's criminal investigative unit is building hundreds of crypto cases, with many to be made public soon."

Are Crop Insurance Proceeds Deferrable for Tax Purposes? - Roger McEowen, Agricultural Law and Taxation Blog. "Deferability is possible if the farmer is on the cash method of accounting and has a practice of deferring the reporting of crop income."

Congress extends expanded eligibility for Health Insurance Premium Tax Credit until 2025 - Wolters Kluwer Tax & Accounting. "The PTC is a refundable credit that helps eligible individuals and their families cover the premiums for health insurance purchased through a state-run exchange. An individual who qualifies for affordable health care coverage under an employer- or government-sponsored plan is not eligible for the PTC. For those who do qualify, the PTC effectively subsidizes the cost of purchasing health insurance on an Exchange."

Tax Court in Reviewed Opinion Invalidates Notice Identifying Reportable Transactions - Jack Townsend, Federal Tax Procedure. "The Court reasoned that the Notice which clearly was not a regulation did not meet the statutory command that the transaction be identified in a regulation. Although it included a lot more words and reasons, that is the guts of the holding."

Lesson From The Tax Court: An Object Lesson For Tax Professionals - Bryan Camp, TaxProf Blog. "In Betty Amos v. Commissioner, T.C. Memo. 2022-109 (Nov. 10, 2022) (Judge Urda), the taxpayer failed to keep records as long as she needed to is.  It is an object lesson for all of us. Ms. Amos was a highly successful tax practitioner, a CPA, who had decades of high-level business experience.  On her 2014 and 2015 returns she reported about $100,000 of IRA income against which she claimed over $4 million of net operating losses (NOLs) that dated back to 1999. While she could produce her 1999 tax returns showing the NOLs, she could not produce the underlying records substantiating what she had then reported, causing Judge Urda to write 'It beggars belief that she would be unaware...[of] her responsibility to demonstrate her entitlement to the deductions she claimed.'"

States Inaugurate a Flat Tax Revolution - Jared Walczak, Tax Policy Blog. "In more than a century of state income taxes, only four states have ever transitioned from a graduated-rate income tax to a flat tax. Another four adopted legislation doing so this year, and a planned transition in a fifth state is now going forward under a recent court decision. In what is already a year of significant bipartisan focus on tax relief, 2022 is also launching something of a flat tax revolution." 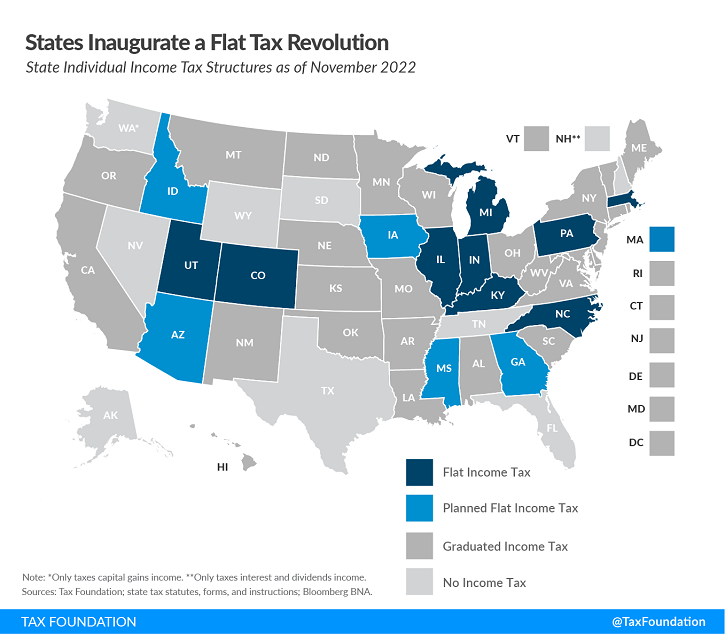 Making Sense of CAMT - Alex Parker, Things of Caesar ($). "CAMT will target only companies with effective tax rates below 15%--not based on their taxable income, but based on the financial profits they report to shareholders, or the equivalent for private companies. Financial income uses different metrics than taxable income, and companies have an incentive to maximize, not downplay, their reported profits. In theory, this will catch companies who have found ways to avoid paying the full amount of taxes which the tax code intended."

Lessons From the 2022 State Ballot Measures - Richard Auxier, TaxVox. "The takeaway is that voters are open to tax cuts and tax increases, but the details matter. And, while we can learn lessons from these votes, each state has its own specific politics and history that shape voters’ perceptions."

Information Security and the Clean Vehicle Credit - Annette Nellen, 21st Century Taxation. "In addition to logical items like the taxpayer's name, the vehicle's VIN and whether the car meets the critical minerals and battery component requirements, it calls for the buyers tax identification number. We can see why the IRS wants that information but why should the buyer have to provide their TIN to the seller? This is contrary to one of the 12 principles of good tax policy - Information Security."

Trump exec says he feared firing if he spoke up about scheme - Michael Sisak, AP via The Hill:

“I thought if I started refusing or fighting back, I’d probably lose my job,” McConney said near the end of a sometimes contentious fourth day of testimony — a lengthy warm-up act for Weisselberg’s looming turn as the prosecution’s star witness.

McConney, who still works for the Trump Organization and has a company-paid lawyer, acknowledged on the witness stand Monday that he’s been speaking with company lawyers about his testimony when court wasn’t in session. He said he even performed some tax calculations on their behalf Sunday night.

Michael Saylor amassed a multibillion-dollar fortune, splurging to combine three Georgetown penthouses into a palatial 7,000-square-foot residence, snapping up a 154-foot yacht dubbed Mr. Terrible and throwing lavish soirees including one where he was draped with an albino python.

All the while, the tech titan did not pay income tax in the District for years and bragged about it to friends, anonymous whistleblowers allege. They said he told people they were “fools” if they did not buy a home in Florida as he did and claim to live there. The state has no income tax.

There are well-known steps to take when you want to establish that you have moved from a high-tax state to a low-tax one. These include changing drivers licenses and auto registrations. Add "avoid albino python soirees" to the list.

I just want to bang on the drums all day. At least if the alternative if cleaning the refrigerator. Today is both National Clean Out Your Fridge Day and National Drummer Day.