The rule would put in place a more stringent test to determine when companies can count workers as contractors rather than employees. Under labor law, employees are eligible for protections such as the minimum wage, medical leave or overtime pay that don’t apply to independent contractors.

The rule would put in place a “multifactor reality test” to determine whether workers are truly in business for themselves and control aspects of their employment such as whether they perform managerial duties, how they are supervised or whether they are able to set prices.

Related: Independent Contractor vs Employee?: What is the Difference.

The proposed rule, made public October 11, provides additional guidance on whether a business can classify a worker as an employee or an independent contractor, leading to significant tax implications.

The new rule could see many independent contractors — which are popular with gig companies such as Uber and Lyft — classified as employees and thus afforded specific benefits under the Fair Labor Standards Act, including employer payroll tax contributions.

Explainer-How a U.S. rule on independent contracting will affect workers, businesses - Daniel Wiessner, Yahoo News. "The agency must now collect and review public comments, so the rule will likely not be finalized until well into next year."

Biden Chips Away at Trump's Deregulatory Legacy With New Gig Worker Rule - Christian Britschgi, Reason. "Organized labor and liberal lawmakers have tried to lump as many workers into the 'employee' bucket as possible in an effort to guarantee more people the overtime pay and benefits that come with that designation. But those efforts have often provoked rebellions from gig workers themselves (and the companies they do business with) who object to the added regulation and rigidity that comes with being an employee."

Corporate taxpayers will be required to report incremental amounts associated with each uncertain tax position taken in the 2022 tax year and identify rulings or regulations adverse to their positions, the IRS announced October 11.

IRS Finalizes Fixes To Premium Tax Credit 'Family Glitch' - Theresa Schliep, Law360 Tax Authority. "Under the new policy, the costs of insuring the whole family will be accounted for when determining PTC eligibility under Section 36B. The family glitch under the former rules from 2013 — in which coverage could still be deemed affordable even if premiums for covering family members pushed those costs past the relevant threshold — aggravated problems with health care access in the U.S., the final rules said."

Manufacturers Warn of Job Losses Over R&D Expensing - Doug Sword, Tax Notes ($). "Full write-off of R&D spending was a part of the U.S. tax code for nearly 70 years, but it ended in 2022 with a switch to five-year amortization — 15 years for R&D conducted outside the United States. The change was a key pay-for in the Tax Cuts and Jobs Act, estimated to raise tax collections by $119.7 billion over 10 years. The Joint Committee on Taxation estimated the change would bring $24.2 billion into the Treasury in 2022 and $32.9 billion in 2023."

Recent heirs to retirement plans got an unexpected boost when the Internal Revenue Service suggested that they could skip making required withdrawals for this year and last, a reprieve that eliminates one-time tax hits and leaves more money in a nest egg to grow.

The tax agency surprised wealth advisors late last Friday when it announced that people wouldn't face an onerous 50% penalty for not taking minimum distributions from inherited plans, such as individual retirement accounts, for 2022 and 2021. Though the IRS didn't spell things out directly and said final rules would come next year, the announcement appears to mean that heirs are permanently off the hook for withdrawals for those two years.

The SECURE Act requires non-spouse beneficiaries of inherited IRAs to withdraw all the funds from the IRAs in 10 years. Many taxpayers interpreted that as meaning you could leave all funds in the IRA until just before the expiration of the ten-year period. The IRS then issued regulations requiring annual withdrawals over the ten-year period.

Pa. Won't Appeal 'Fulfillment By Amazon' Nexus Ruling - Maria Koklanaris, Law360 Tax Authority ($). "The Pennsylvania Department of Revenue will not appeal a state court's holding that it cannot pursue back taxes from certain Amazon third-party sellers that had inventory housed in the Keystone State, a department spokesman told Law360 on Tuesday."

This is good news for Amazon sellers who might not even know that Amazon was warehousing their goods in Pennsylvania.

Newsom’s office announced September 30 that the governor had signed S.B. 951 into law...

As of January 1, 2024, the bill will make “all wages subject to the SDI contribution rate,” according to that analysis, eliminating the cap on the amount of a person’s wages that are assessed the SDI payroll tax, which pays for the programs. An August 17 analysis of the bill says the SDI contribution rate varies from 0.1 percent to 1.5 percent (it’s 1.1 percent as of 2022); the amount of wages that the tax applies to was capped at $145,600 before S.B. 951's elimination of the cap.

As it stands, legal cannabis businesses around the country cannot take normal business deductions, because the federal government currently classifies marijuana as having no real medicinal purpose and being at a high risk of abuse.

But that wouldn’t be necessary if the government knocked cannabis’ classification under the Controlled Substances Act down a couple pegs, from Schedule I to at least Schedule III.

You also could be required to report other non-U.S. holdings such as —

These accounts generally must be reported even if the accounts don't generate any taxable income.

Man Gets Ten Years In Prison For Tax Fraud With PPP Loans & Pro Athletes - Robert Wood, Forbes. "A California man was sentenced to 10 years in prison for conspiring with others in schemes to defraud the IRS and the Paycheck Protection Program (PPP)."

Tax Hike Proposals Live on Despite Being Dropped in the Inflation Reduction Act- Garrett Watson, Tax Foundation ($). "While many of the tax increases considered over the last two years were eventually shelved, they will continue to be part of the ongoing debate about whether and how to tax high earners and how best to reform the tax code."

At trial, the United States proved that between 2016 and 2019, Defendant engaged in a scheme to defraud the IRS into paying millions of dollars in refunds to which Defendant was not entitled. To obtain those refunds, Defendant claimed to be filing returns on behalf of an estate or a trust that in reality did not exist. Defendant’ false tax returns attached and were based on fake 1099s that falsely claimed significant sums of income were withheld for federal taxes by third parties such as banks. In reality, Defendant was unemployed and there was no estate, no trust, and no income.

Over the period of the scheme, Defendant filed five false tax returns asking for refunds totaling more than $80 million. Although Defendant did not receive the majority of the money, he spent the refunds he did receive on an expensive house in Chicago, a Mercedes, and other personal expenses. The IRS later seized and forfeited a significant percentage of the money, the house, and the car.

If you are wondering what might happen to the Mercedes, see the next item.

Ready for that little Italian sportscar? The IRS has the deal for you. An online auction for a 2016 Alfa Romea 4C Spider convertible goes until October 18. Current bid: $38,800. 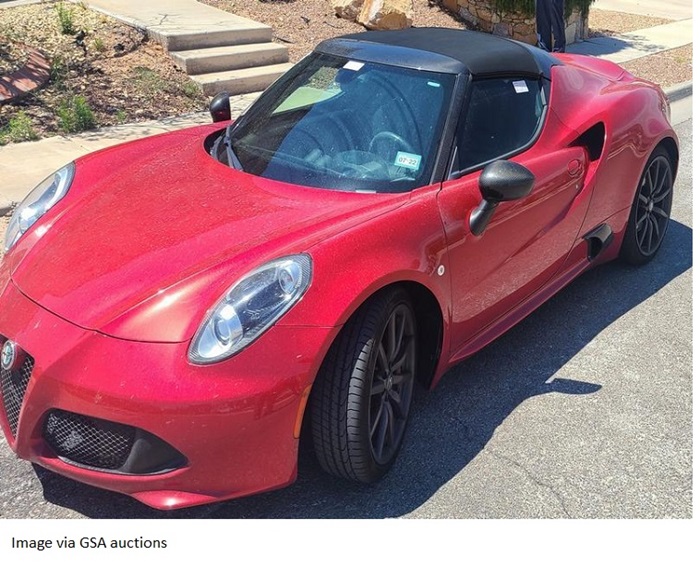 Fossils, Farmers, Pulled Pork. What do these have in common? They are all celebrated today!