IRS Commissioner Charles Rettig is once again in hot water with a top House Democratic taxwriter, this time over the agency’s loose handling of nonprofits’ tax-exempt status applications.

House Ways and Means Oversight Subcommittee Chair Bill Pascrell Jr., D-N.J., issued his latest demand for Rettig to be removed from office in response to Treasury Inspector General for Tax Administration reviews of the IRS’s streamlined application process for obtaining tax-exempt status. One of those reports describes how TIGTA surreptitiously submitted five streamlined applications for tax-exempt status on behalf of nonexistent organizations; four were approved, while one was blocked.

‘The findings by TIGTA are the latest gut punch and embarrassment for IRS leaders. These reports are more evidence that Trump appointee Charles Rettig should be ousted,’ Pascrell said in an October 7 release.

Rettig's term is up next month. Pascrell might be barking more than biting.

It will be easier for families whose members have employer-sponsored health plans to get Obamacare subsidies as a result of a rule issued Tuesday by the Biden administration.

The final rule (RIN: 1545-BQ16) from the Internal Revenue Service fixes the so-called family glitch, which prevents family members from receiving Affordable Care Act subsidies if a household member has access to employer-sponsored coverage that meets the law’s requirements for affordability and coverage. The law requires that employer-sponsored plans be affordable only for employees, not for family members, although family coverage may be unaffordable for the entire household.

President Biden statement (in part) on the release of the final rule:

Health care should be a right, not a privilege. But for many Americans caught in the so-called ‘family glitch,’ the peace of mind that health insurance brings has remained out of reach. Because of this glitch, employer-based health insurance has been considered ‘affordable’ if the coverage is affordable for the employee even if it is not for their family members—making those family members ineligible for Affordable Care Act subsidies even though they need them to afford quality coverage.

Researchers want to see transparency measures included in Treasury’s rollout of recently enacted clean energy tax credits, although they acknowledge that such measures may come with trade-offs.

Treasury and the IRS announced October 5 that they are seeking public input on implementation of the estimated $270 billion in clean energy tax incentives enacted in the Inflation Reduction Act (P.L. 117-169). Treasury has authority under the act to issue guidance on tax credits for electric vehicles, manufacturing, renewable energy, and other incentives.

But Nathan Jensen, a government professor at the University of Texas at Austin, told Tax Notes that many of the act’s provisions don’t include basic transparency safeguards that are needed to examine the effectiveness of the tax credits. While there are some data collection requirements for the EV tax credits, Jensen said, ‘this is data collection but not transparency.’

The New Place-Based Tax Provisions in the IRA – Marie Sapirie, Tax Notes ($). This article talks about how the “increased credits for ‘energy communities’ in low-income areas under the Inflation Reduction Act could be a powerful incentive for investors and represent a new form of place-based tax policy.”

Inconsistent interpretations of the supervisory approval mandate in section 6751(b) might be a mess only Congress can fix, a Tax Court judge and an IRS official indicated.

Senior Judge L. Paige Marvel described the statute as one of the biggest procedural challenges she has seen during her tenure at the Tax Court. Speaking October 6 at a conference in Washington sponsored by Crowell & Moring LLC, she said conflicting interpretations by multiple courts have resulted in ‘a mess,’ which she described as unfair to taxpayers and to the government and in need of a fix.

The Internal Revenue Service Independent Office of Appeals is still taking about a year to work cases from beginning to end, the head of the office said Friday, adding he expected that figure to improve.

The appeals office took an average of 365 days to work cases from beginning to end during the 2022 fiscal year, according to data provided by appeals chief Andrew Keyso. That figure is slightly down from the average cycle time of 372 days in fiscal 2021, Keyso said during a conference in Washington, D.C., sponsored by Crowell & Moring LLP.

California’s Office of Tax Appeals will add tax specialists who aren’t attorneys to its appeal panels in the next year to comply with a new state law that clears the way for taxpayers to be represented by accountants.

Accounting firms sought the change to solidify the office’s status as an administrative body—not a court—so certified public accountants can avoid what some said was a possible violation of rules against advocacy and practicing in a court. The adjustment makes it clear to accountants that they can practice before the appeals office, but it isn’t clear whether it will impact taxpayers appealing their state tax assessments.

Every year, millions of Americans pack up and move from one state to another, providing unique insights into what people value when deciding where to live, work, and raise a family. For many years, policymakers, journalists, and taxpayers have debated the role state tax policy plays in individuals’ and businesses’ location decisions. Annual data about who is moving—and where—provide clues about the factors contributing to these moves.

Taxes are one such factor. The latest IRS and Census data show that people and businesses favor states with low and structurally sound tax systems, which can impact the state’s economic growth and governmental coffers. 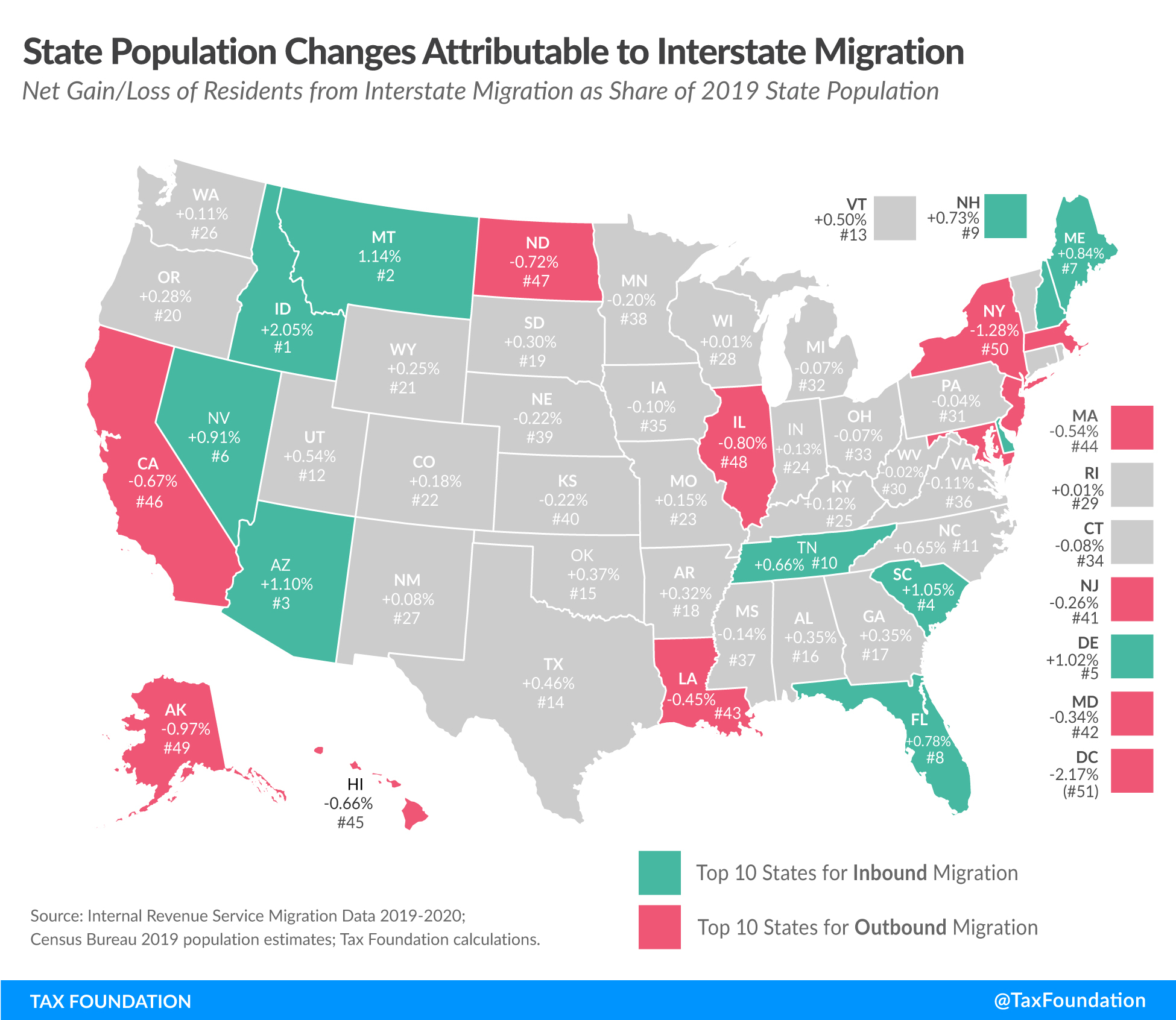 The piece notes that "one observation from the 2019-2020 IRS migration data is that a strong positive relationship exists between state tax competitiveness and inbound migration. Overall, states with lower taxes and sound tax structures experienced stronger inbound migration than states with higher taxes and more burdensome structures." Think the SALT cap had anything to do with this?

Colo. Property Owners Notch Win In County Tax Fight – Daniel Ducassi, Law360 Tax Authority ($). “A Colorado appeals panel has ruled that property owners are entitled to revaluations for ‘unusual conditions’ that happen any time between regular tax assessments, giving a win to one of 11 groups challenging county assessors for not lowering their bills due to the pandemic."

In long-running litigation over foreign bank account reporting penalties for willful failure, a taxpayer and the IRS are fighting over penalty calculation, with the taxpayer alleging that the government is ignoring a circuit decision.

In United States v. Schwarzbaum, Isac Schwarzbaum filed a renewed motion for reconsideration and response to the government’s motion for entry of judgment in the U.S. District Court for the Southern District of Florida October 6.

Governments across the world chose policies that deepened economic inequality after the outbreak of the Covid-19 pandemic, according to new research.

Analysis by the nonprofits Oxfam and Development Finance International found that of the 161 countries surveyed, almost all either froze or lowered taxes on their richest citizens, while close to half slashed the share of their budgets that went toward social measures between 2020 and 2022.

From the “Is it a food or snack” file:

A court in Britain looked at a bag of 27 marshmallows this summer and considered the future of the soft, sweet treats: Were these marshmallows destined to be eaten straight from the bag or turned into s’mores?

This is not a joke.

The question may seem straightforward, but a tax tribunal presented with the sweets evaluated them in granular detail to determine if a food product called Mega Marshmallows would be subject to the same standard retail sales tax as regular marshmallows, which are about an inch shorter and about a half-inch thinner.

And the decision is….

The court said that unlike standard marshmallows, which are subject to a VAT of 20 percent, these slightly larger marshmallows were not a confectionary and should therefore be subject to a 0 percent VAT, like most food.

Does this mean a candy bar the size of a brick could be considered food and not taxed as a snack or candy?

From the “how much does it pay to monitor that?” file:

New Zealand’s government on Tuesday proposed taxing the greenhouse gasses that farm animals make from burping and peeing as part of a plan to tackle climate change.

It’s National Sausage Pizza Day! So get your pizza on!