The problem arose when taxpayers went to compute their Accumulated Adjustments Account on Schedule M-2 of Form 1120-S.  While the 2020 instructions told taxpayers to omit tax-exempt income from the calculation of AAA, AAA was to be reduced by all deductible expenses. Tax software, following those instructions would move the tax exempt income to the Other Adjustments Account column but would normally not make any adjustment to move the expenses paid with the PPP loans into this account and out of the AAA account. This was true even though those instructions did state this account was to be adjusted for “tax-exempt income (and related expenses)…(emphasis added).”

The Accumulated Adjustment Account measures the amount that former C corporations that have elected S corporation status can distribute to owners as a tax-free return of basis without triggering a taxable distribution of accumulated C corporation earnings. If the exempt PPP income didn't increase AAA, but the expenses giving rise to PPP forgiveness reduced it, it could trigger unexpected tax to S corporation shareholders.

The IRS guidance, issued as draft instructions to 2021 Form 1120-S, would have been helpful in preparing the 2020 returns showing Paycheck Protection Plan loan forgiveness. Late as it is, I believe the IRS guidance is correct and helpful.

The Build Back Better Act (H.R. 5376) appears relegated to the Senate’s back burner as Democrats launch the second session of the 117th Congress focused instead on a possible change in filibuster rules, the surge in COVID-19 cases, and the January 6 anniversary of the storming of their building.

There is even disagreement among Senate Democrats over whether negotiations are taking place on the bill, the prospects for which dimmed December 19 when Sen. Joe Manchin III, D-W.Va., said on Fox News Sunday that he couldn’t support the social spending and tax bill.

Well, as we now know, the Senate won’t even start working in earnest on President Joe Biden’s top legislative priority until after it finishes the voting rights debate and vote. So that means work won’t begin until the third week of January.

Renewal of the expanded child tax credit has emerged as a top priority for Democrats in 2022 as they look for ways to reconfigure tax breaks and other parts of the House-passed Build Back Better Act to salvage the bill.

Several senior Democrats said party leaders were looking for ways to advance a revival of the temporarily expanded child tax credit, which expired at the end of last year. Among the ideas on the table are a potential stand-alone version of the one-year extension of the expanded credit in the House-passed BBB Act, H.R. 5376, or a package pairing a long-term extension of the incentive with revenue-raising offsets and other items.

Build Back Better Takes Back Seat to Democrats’ Election-Law Push - Andrew Duehren, Wall Street Journal ($). "While many Democrats are resistant to Mr. Manchin’s demands on the child tax credit, some have started outlining a package in line with his requirements on the overall design of the bill. Senate Finance Chairman Ron Wyden (D., Ore.) has floated a package that focuses on healthcare subsidies, an enhanced child tax credit, lowering prescription drug prices and climate initiatives."

Electoral realities may trump ‘Build Back Better’ cost concerns - Lindsey McPherson, Roll Call. "The trifecta of power that Democrats currently hold with House and Senate majorities and President Joe Biden in the White House does not come along often. The party’s last trifecta was a decade ago, during the first two years of the Obama administration. That means Democrats are less likely after the 2022 midterms to be in a position to extend the temporary spending and tax policies they’re now trying to pass through the filibuster-proof budget reconciliation process, assuming continued Republican opposition."

Manchin: There are 'no negotiations' on Biden spending bill 'at this time'- Alexander Bolton, The Hill. "Sen. Joe Manchin (D-W.Va.) told reporters Tuesday that he isn’t involved in any serious talks at this time about reviving President Biden’s sweeping climate and social spending bill, underscoring the lack of progress on the president’s signature domestic policy plan."

BBB Hits A Wall And Will Probably Lie Down For A While - Renu Zaretsky, Daily Deducton. "The Build Back Better Act won’t be ready for a Senate floor vote anytime soon. Sen. Joe Manchin still wants recipients to have a job before they can get the child tax credit while many progressives insist the credit be fully available for even the lowest-income parents."

It's 2022. How does the BBB look now? - Bernie Becker, Politico. "But there are plenty of people who still believe there’s a chance for Manchin, Biden and Democratic congressional leaders to find some sort of agreement, by choosing just a handful of the policy initiatives currently in Build Back Better and enacting them more long-term."

The Internal Revenue Service unveiled an electronic application form many nonprofits will have to submit when seeking tax-exempt status, saying it will be required after a 90-day transition period.

The revised Form 1024 will be required to be submitted electronically in lieu of a paper application, the IRS said Monday. Some organizations including labor unions, business leagues and social clubs already use Form 1024 to apply for recognition of their tax exemptions.

The IRS has provided guidance (LB&I-04-0122-0001) on claims for refund that include a research credit claim and advises Large Business and International and Small Business/Self-Employed division employees of the procedures to follow to determine if the claim is valid.

In September, the IRS released field attorney advice (FAA 20214101F) clarifying information that a taxpayer must provide to the IRS for purposes of meeting the specificity requirement for a section 41 research credit claim. The LB&I and SB/SE division memo states that the validity of a research credit claim must be determined prior to beginning an examination of the refund claim. The guidance is effective for claims filed on or after January 10, 2022.

The state agreed to provide $845.8 million in job development investment grants — the largest potential award in the history of the grant program — to the tech giant over a period of 39 years if the company meets job creation and investment targets. The annual grant payments are based on state personal income tax withholdings paid by Apple for net new jobs created.

“As with all truly bad subsidies, North Carolina’s elected officials gave a big company a giant pile of money to do what that company was already going to do anyway,” CEA President John Mozena said in a statement.

Americans Moved to Low-Tax States in 2021 - Jared Walczak, Tax Policy Blog. "Whereas the District of Columbia’s population shrunk by 2.8 percent between April 2020 (roughly the start of the pandemic) to July 2021, New York lost 1.8 percent of its population, and Illinois, Hawaii, and California rounded out the top five jurisdictions for population loss, Idaho was gaining 3.4 percent, while Utah, Montana, Arizona, South Carolina, Delaware, Texas, Nevada, Florida, and North Carolina all saw population gains of 1 percent or more." 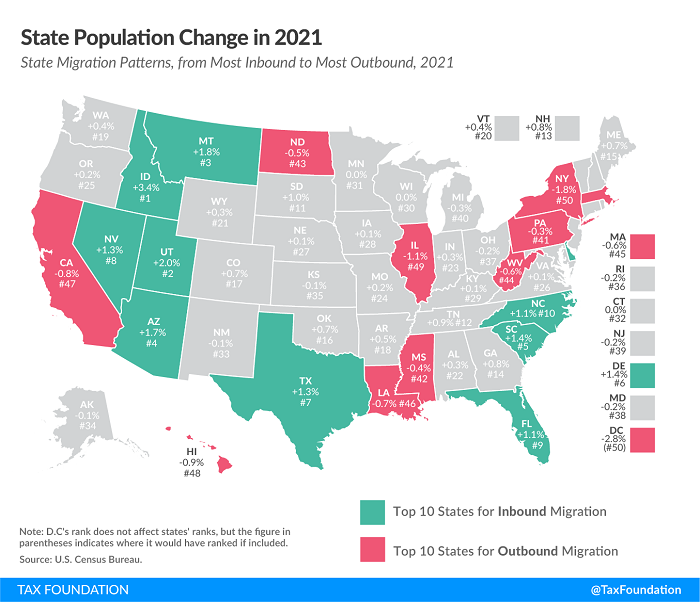 In Memoriam: William Hoffman - Chuck O'Toole, Tax Notes. "Tax Notes senior IRS reporter William Hoffman died in his sleep January 1 while visiting family in Texas. He was 62."  Our condolences to his family and to the Tax Notes team.

Colorado wildfire victims join growing May 16 delayed tax deadline list - Kay Bell, Don't Mess With Taxes. "The Internal Revenue Service today announced that Boulder Country residents whose homes and/or businesses were in the path of this past weekend's wildfires will have until May 16 to file various returns and make tax payments."

Eleventh Circuit Finds Regulation Invalid Under the APA - Monte Jackel, Procedurally Taxing. "What does this all mean for the future? The Hewitt case was an Eleventh Circuit opinion and so, under the Golsen rule, the Tax Court does not have to follow that case for taxpayers not within that circuit. But given the circuit court opinion, will this opinion effectively require the IRS to respond to almost every comment made and give a reason directed to that comment or otherwise risk invalidation of the regulation? That seems to be the risk the IRS will be taking if it does not act conservatively and respond to everything. The very recent foreign tax credit regulations seem to have taken the respond to everything approach and that does add pages and pages onto the regulation and become repetitive in a number of cases."

How Will COVID-19 Relief Impact Farmers' 2021 Returns? - Kristine Tidgren, Ag Docket. "With the CAA, Congress explicitly confirmed that forgiven PPP loans are not income to the taxpayer and 'no deduction shall be denied, no tax attribute shall be reduced, and no basis increase shall be denied by reason of a forgiven PPP loan’s exclusion from gross income.”'In other words, the receipt of a PPP loan in 2021 (or 2020) does not affect an individual’s tax liability. Iowa, along with many other states, has conformed to this treatment. In other words, a PPP loan is not reported on the Iowa return, and tax deductions are not reduced."

It’s Time to Generate 2021 1099s - Russ Fox, Taxable Talk. "The best way to check whether or not you need to send a 1099 to a vendor is to know this before you pay a vendor’s invoice. I tell my clients that they should have each vendor complete a Form W-9 before they pay the vendor. You can then enter the vendor’s taxpayer identification number into your accounting software (along with whether or not the vendor is exempt from 1099 reporting) on an ongoing basis."

Should the Child Tax Credit Be Limited to Those with Lower Incomes, As Manchin Prefers? - Elaine Maag, TaxVox. "The expanded CTC is celebrated for cutting child poverty nearly in half and reducing it below 10 percent in all but three states. And it’s easy to question why current law allows families making more than $400,000 to claim the credit. But phasing it out at lower incomes creates its own problems. It can create high hidden tax rates, could undermine the credit’s advance payment feature and the credit’s overall political support, and could create coverage disparities across states."

San Diego rabbi sentenced to 14 months in prison for multimillion-dollar fraud scheme - Brad Dress, The Hill. "Prosecutors say [the rabbi] received up to $6.2 million in charitable donations to the Chabad and "secretly refunded up to 90 percent of the donations" to donors — allowing them to claim fraudulent tax deductions with fake receipts — before pocketing 10 percent of it for himself. The IRS lost more than $1.5 million dollars in the scheme."

President of Cameroon Soccer Group Owes Spain $1 Million in Tax - Michael Smith, Tax Notes. "Eto'o is one of several current and former Barcelona players accused of avoiding taxes in Spain. Brazilian soccer star Neymar da Silva Santos Júnior topped the list last year, allegedly owing Spain €34.6 million from his time with Barcelona between 2013 and 2017. In 2016 a Brazilian court seized Neymar’s Brazilian assets, worth a reported $47.3 million, because he did not appropriately declare earnings from his soccer contracts or an advertising deal with Nike."

Come fly with me. Today is National Bird Day, an important day for work-at-home Covid refugees.