Treasury to eye ‘clawback’ of estate and gift taxes from trusts used by the wealthy - Lynnley Browning, Accounting Today:

Clary Redd, an estate planning lawyer and partner at law firm Stinson in St. Louis, said Treasury was going after situations in which a donor makes a large gift that uses up her lifetime exclusion level but at the same time keeps an interest in the gifted property.

A “classic example,” he said, would be a grantor retained income trust, or GRIT. In that type of trust, the grantor transfers assets to the trust, paying taxes on it, but also keeps an income stream from the gifted property. GRITs, he said, are attractive to wealthy investors who want to use up their lifetime exclusion before it’s sliced in half come 2026, but are also ”nervous about whether they can afford to lose entirely the economic benefit of the gifted assets.”

Discussions continue between congressional Democrats and the White House, with no Senate version of the tax bill in sight as progressives and moderates pull in opposite directions on the reconciliation bill’s $3.5 trillion price tag. At the same time, issues including drug pricing, a state and local tax deduction cap, and pay-fors continue to divide a House and Senate where Democrats can afford to lose a combined three votes to pass their tax bill.

In a “Dear Colleague” letter September 20, House Speaker Nancy Pelosi, D-Calif., wrote that she still hoped for a $3.5 trillion reconciliation bill but that “we must be prepared for adjustments.”

“I think she was preparing House members for the idea that the total gross investment is not going to be $3.5 trillion,” House Budget Committee Chair John A. Yarmuth, D-Ky., told MSNBC when asked about Pelosi’s letter to House Democrats.

House passes stopgap funding, debt ceiling suspensioDesignn bill - Jennifer Shutt, Roll Call. "The House passed a catchall budget package Tuesday that’s intended to avoid a partial government shutdown and debt limit crisis, but it seems likely to come back for a do-over once the Senate works its will."

Most states generally use contingent-fee auditors, Biek noted, adding that with a few exceptions, states just don’t have their own employees to conduct the audits.

Related: What is unclaimed property and why should you care.

The IRS Announces New Per Diem Rates Effective October 1, 2021 - Bailey Finney, Eide Bailly. "For meal and incidental expenses only, the rate is $74 for travel to any high-cost locality, and $64 for travel to any other locality within the continental US."

Treasury and the IRS made only minor tweaks to final regulations addressing 1988 statutory changes regarding the treatment of distributions of property from a corporation to a shareholder.

The updates to the section 301 regs contained in T.D. 9954, released September 21, mean that the provisions in reg. section 1.301-1 now mirror the statutory amendments made by the 1988 Technical and Miscellaneous Revenue Act.

Those amendments provided that the amount of a distribution of property a corporation makes to its shareholder is the fair market value of the distributed property.

If updating regulations for a 33 year-old provision seems pokey, well, it could be worse. The regulations for the "at-risk" rules of Sec. 465, enacted in 1976, have been "temporary" since August 1977.

The WOTC is a federal business tax credit, administered in conjunction with the U.S. Department of Labor (DoL), that encourages companies to expand their hiring practices while simultaneously opening doors to good jobs for many individuals who've had trouble getting hired.

The first step in claiming the WOTC is meeting the certification requirement. An employer must first request certification by submitting IRS Form 8850, Pre-screening Notice and Certification Request for the Work Opportunity Credit, to their state workforce agency.

Many employers leave money on the table by not including WOTC certification in their employee onboarding.

Evaluating Employee Ownership as an Exit Strategy or Growth Strategy - Eide Bailly. "Most business owners pursue ESOPs for the reasons mentioned above: passing on a legacy, optimizing taxes and maintaining the culture. However, selling to an ESOP can also create avenues to growth."

California Taxes Residents—Even Temporary Ones - Robert Wood, Forbes. "California regulations say that whether the purpose an individual is in the state is temporary or transitory depends on the facts and circumstances. Passing through is OK. So is a brief rest or vacation, or to complete a particular transaction, or perform a particular contract, or fulfill a particular engagement that will not require your presence except for a short period. However, if an individual is in California to improve your health and your illness is of such a character as to require a relatively long or indefinite period to recuperate, you are a California resident and taxable here."

Yes, the U.S. Tax Code Is Progressive - Alex Muresianu, Tax Policy Blog. "While the image that rich Americans pay little taxes is popular, it’s a misconception: high-income individuals already pay a large share of taxes, even when compared to their share of national income." 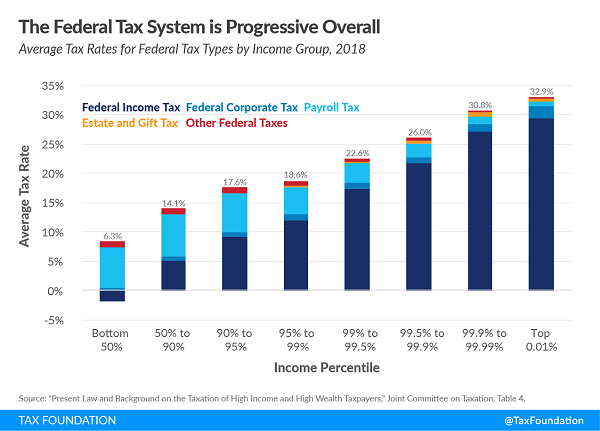 Could Collective Defined Contribution Plans Reduce the Risks Associated with Retirement Plans for Both Employers and Their Workers? - Mark Iwry, David John, and Christopher Pulliam, TaxVox. "In a new paper, we explore the potential for collective defined contribution (CDC) plans to help rethink risk sharing between employers and individuals and among savers and retirees. CDCs and other hybrids combine DB and DC elements in different ways. CDC plans generally let employers avoid the funding volatility and investment risk of DB plans while reducing the financial risks individuals face in many DC plans."

Bumps in the Road Sequel: Update on the Filing Season Challenges: Part I - NTA Blog:

Since filing a duplicative original or amended return could cause problems if the IRS finds the original return in the meantime, it is imperative that taxpayers make every effort to confirm whether the IRS has received the return before resubmitting another.

If you file on paper, don't hold your breath for your refund. For that matter, don't spend your e-file refund early either.

Related: Why Did the IRS File a Tax Lien Against Me?

Trump's lawsuit -- which is seeking "damages in an amount to be determined at trial, but believed to be no less than One Hundred Million Dollars" -- alleges that Mary Trump's disclosure of the tax information to the Times amounted to an illegal breach of contract, among other claims, because the disclosure allegedly violated a 2001 settlement agreement among the Trump family.

I have no idea whether the lawsuit has any merit, but it does highlight that unauthorized disclosure of tax information is serious business. That's why your friendly tax preparer insists on using secure portals to send you tax documents, to prevent inadvertent access to confidential information.

Today is the first day of Autumn. I love fall, but some people mourn the end of summer. If you are such a person, perhaps you prefer to think of today as National Ice Cream Cone Day or Hobbit Day.