The Ways and Means Committee’s measure also includes provisions to pay for new spending and tax breaks elsewhere in the package. It would raise the corporate tax rate for income above $5 million from 21 percent to 26.5 percent, raise the top individual income tax rate from 37 percent to 39.6 percent, raise the top capital gains rate from 20 percent to 25 percent and impose a 3 percent surtax on individuals’ income above $5 million. It also would provide the IRS with an additional $80 billion to strengthen tax enforcement and modernize its technology.

The legislation also expands the net investment income tax to cover net investment income derived in the ordinary course of a trade or business for taxpayers. This applies to those with greater than $400,000 in taxable income (single filer) or $500,000 (joint filer), as well as for trusts and estates. This section of the legislation would apply to taxable years beginning after December 31, 2021.

The legislation amends section 199A by setting the maximum allowable deduction at $500,000 in the case of a joint return, $400,000 for an individual return, $250,000 for a married individual filing a separate return, and $10,000 for a trust or estate. Existing limitations on specified service businesses are retained. The effective date for this section of the bill is taxable years beginning after December 31, 2021.

These are just a few of the sweeping changes in the bill, which was approved without amendment yesterday. The article has a more complete rundown.

The taxwriting panel’s work now goes to the House Budget Committee to be added to the rest of a $3.5 trillion reconciliation bill that includes new spending on free community college, housing, and other programs.

Meanwhile, the Senate has yet to unveil its version of the reconciliation bill, including the Senate Finance Committee, whose members expressed some disappointments in the House bill, such as the absence of a provision to end stepped-up basis.

A lot of issues remain unresolved when it comes to the budget reconciliation bill. Congressional Democrats are the only members expected to support it and they have disagreements over how high to raise taxes and which tax provisions should receive an increase. There are also disagreements over the spending portion of the bill and whether or not to use the legislation to increase the debt ceiling.

These dust-ups likely mean that modifications are inevitable for the legislation and that could include tax changes even though the House Ways and Means Committee has completed its work on the bill. Tax amendments could be proposed during the House Rules Committee meeting on the bill. At this point, it is not clear if that will occur, but it is possible.

Following the markup, Ways and Means Committee Chair Richard Neal, D-Mass., told reporters that discussions continue about revising parts of the tax package, including a change to the $10,000 cap on the federal deduction for state and local taxes.

"We're going to attempt to address part of it for sure," Neal said, adding that how to pay for a change to the $10,000 SALT deduction cap is still being discussed.

Rep. Danny Davis, D-Ill., said he didn't think the legislation would come up for a vote on the House floor next week.

Spending plan clears $2T tax hurdle - Katy O'Donnell and Aubree Eliza Weaver, Politico. "Democrats’ $3.5 trillion plan to dramatically expand the federal social safety net cleared its first major hurdle as the House Ways and Means Committee approved $2.1 trillion in new taxes to help pay for it. But the breakdown of the 24-19 vote could spell trouble for the bill’s ultimate passage, our Brian Faler reports, after a moderate Democrat sided with every Republican member of the panel in opposing the grab-bag of tax hikes, most of which target corporations and wealthy individuals."

In House Tax Bill, Companies Get Return of Higher Rates but Not the Breaks - Theo Francis and Richard Rubin, Wall Street Journal ($):

When Republicans made sweeping changes to corporate taxes in their 2017 tax overhaul, executives and tax professionals worried that a Democratic Congress could roll back the legislation’s rate cuts without reinstating the many tax breaks the law tightened or eliminated.

Based on this week’s congressional tax proposal, it looks as if they were right.

Treasury Dept. and IRS push House Democrats to expand crackdown on tax cheats - Jeff Stein, Washington Post ($). "In letters to House Ways and Means Committee Chairman Richard E. Neal (D-Mass.), Yellen and Rettig stressed the importance of adopting an increase in funding for the IRS and new bank reporting requirements designed to help the agency target wealthy Americans dodging their tax obligations. Neal’s tax proposal, released earlier this week, included an approximately $80 billion increase in funding for the IRS but left out the new reporting requirements pushed by the administration."

Bombshell tax draft throws curveball at retirement plans, inheritances, levies on the rich - Lynnley Browning, Accounting Today. "If an individual’s combined IRAs and 401(k)s have more than $10 million the prior year, she would be banned from making further contributions to her Roth IRA or traditional IRA in the current year. The limit would only apply to single taxpayers (and married taxpayers filing separately) with taxable incomes over $400,000, married couples with incomes over $450,000 and heads of households with incomes over $425,000." 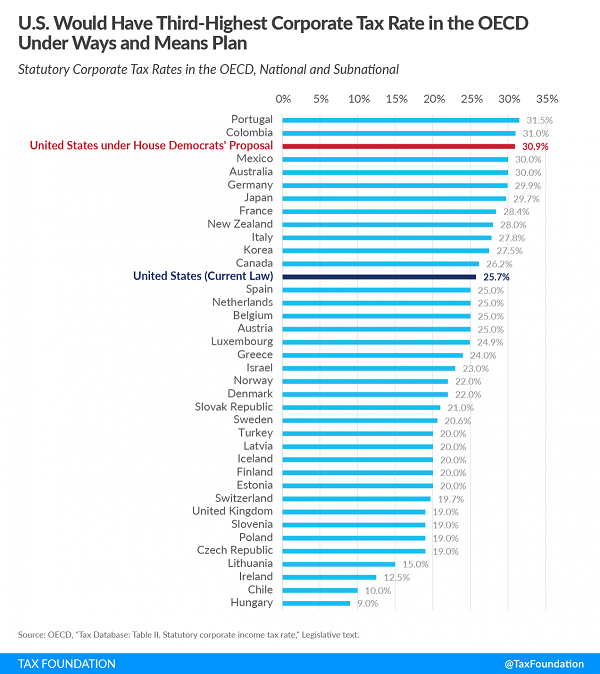 Gossett's most popular products are 60-milliliter bottles of vaping liquid, which come with various nicotine strengths. For a current cigarette smoker looking to transition to vaping, Gossett says he recommends liquids with 18 milligrams of nicotine per milliliter, which he sells for about $15.

Democrats' tax bill would impose a $100.66 excise tax on every 1,810 milligrams of nicotine, adding approximately $60 in taxes to that 60-milliliter bottle of 18-milligram strength e-liquid. The bill is estimated to add about $1 to a pack of traditional, combustible cigarettes.

Seems strange for the tax law to discourage alternatives to cigarettes.

Tax Reform - Did You Think It Would Include a Tax Subsidy for Local Newspapers? - Annette Nellen, 21st Century Taxation. "I don't see any rationale provided for the proposal. Without any purpose or goal stated, how do we know if it worked? It would be good to identify what help is really needed? Do subscribers need assistance to buy the local paper? Is a different distribution system needed?  A different funding model? I think that is the big issue hurting newspapers - advertisers found wider reach for their ads on social media and help wanted ads and for sale ads have other online outlets. Newspapers need advertising revenue to survive and that dropped."

Partnership Audits Are About to Get Real - Nathan Richman, Tax Notes ($):

The IRS will start implementing its large partnership compliance program audits within a few weeks as the first batch of centralized partnership audits are wrapping up.

The agency has developed new data analytics methods that will be given a test run in the first batch of audits in the compliance program, Clifford Scherwinski of the IRS Large Business and International Division said September 15.

Scherwinski noted that the IRS announced the large partnership compliance program alongside a similar program focusing on corporate taxpayers.

Employee or contractor classifications and other employment tax tips for businesses - Kay Bell, Don't Mess With Taxes. "On the outreach side, especially during this year's National Small Business Week sponsored by the Small Business Administration, the IRS is working to get the tax word out about employment and other business tax requirements."

Gifting Pre-Death (Partnership Interests) – Part Three - Roger McEowen, Agricultural Law and Taxation Blog. "Transitioning the farming or ranching business to the next generation is difficult from a technical perspective.  But those difficulties should not prevent farm and ranch families from doing appropriate planning to ensure that a succession plan is in place to help assist the future economic success of the family business."

Only Portion of Award Related to Psychotherapy Expenses Incurred by End of Tax Year of Award Can Be Excluded from Income - Ed Zollars, Current Federal Tax Developments. "While it seems likely she will continue to incur psychotherapy costs related to her PTSD in later years, the Court noted that the Court could not make an allowance for the remainder of the award for such expenses she might incur in the future"

Effective Income Tax Rates Have Fallen for The Top One Percent Since World War II - Robert McClelland, Tax Vox. "While average effective tax rates barely changed in the US from 1945 to 2015, the average tax rates of high-income households fell sharply—from about 50 percent to 25 percent for the highest income 0.01 percent and from about 40 percent to about 25 percent for the top 1 percent."

The existence of, well, a World War might have had something to do with higher rates then. The chart with the post shows that the rate is about the same as it was in 1965, and in all years the rate on the top 1% was a lot higher than the average rate.

I can only imagine how he explained that to his tax preparer.

Would You Turn in Your Neighbor for Tax Fraud? - Kelly Phillips Erb, Bloomberg. "IRS Criminal Investigation, commonly referred to as CI, hopes that your answer is a resounding yes. And it’s partnering with New York State Crime Stoppers for a 12-week public service campaign to help bring tax criminals to justice."