Treasury Greenlights Paid Leave Credit Expansion for Vaccines - Jonathan Curry, Tax Notes. "Employers can now claim tax credits for giving employees time off to take not just themselves but their family members to get vaccinated, according to new guidance from the IRS and Treasury."

The new guidance provides businesses with certainty that the credits can be applied to employees helping someone get vaccinated or assisting with vaccine recovery, which hadn’t been clear before, according to Joe Kristan of Eide Bailly LLP. Whether it will move the needle on vaccination rates is less clear.

“It’s a big country, so I’m sure it will make the difference for somebody somewhere. But I suspect buying a Powerball ticket for everyone driving someone to a vaccination site or getting shots would work better, with less compliance cost,” Kristan said.

IRS Revises FAQ to Expand Paid Leave Credit to Include Vaccine-Related Leave for Related Individuals - Ed Zollars, Current Federal Tax Developments. "As was true before this change, an employee who is given paid leave for time to obtain a vaccination for him/herself or given paid time off to recover from the effects of the vaccination would entitle the employer to a credit for up to 100% (rather than two-thirds) of the employee’s regular rate of pay, capped at $511 per day (rather than $200)."

The Democrats also recognize that previous Republican efforts to repeal section 1031 and to take buildings out of its ambit failed, according to Franasiak. “So the Democrats are looking at that saying, ‘This is going to be a heck of a fight. It probably isn't going to be worth it,’” he said. “I think there's also a general feeling that commercial real estate’s not the problem and that you shouldn't be raising taxes in the middle of a recovery, particularly when infrastructure is as much buildings and commercial real estate as anything else.”

Time to Apply for PPP Forgiveness; Forms 3509/3510 Updates - Adam Sweet, Eide Bailly. "Hopefully most PPP borrowers have submitted, or are planning to submit, their loan forgiveness application. And with the government’s apparent withdrawal from reviewing loans in excess of $2 million, most eligible PPP borrowers may have their PPP loans officially forgiven in the next few months. This may allow taxpayers to turn their attention towards other programs, like the Employee Retention Credit."

Taxpayers should file an amended return if they:

Taxpayers do not need to file an amended return if they:

The IRS will calculate the credit and include it in any overpayment; filed a married filing joint return, live in a community property state, and entered a smaller exclusion amount than entitled on Schedule 1, line 8.

If you don't have to file a refund claim, you shouldn't. Otherwise you will just have to deal with notices.

Advance Child Tax Credit opt-out deadline for August payment is Monday, 8/2 - Kay Bell, Don't Mess With Taxes. "If you don't have an IRS account, you'll need to create one using ID.me, a credentialed service the IRS has selected to support its online login services."

Responding within the 60-day time period is critical for taxpayers to dispute the math error assessment. This means taxpayers must understand exactly what changes the IRS made, what they need to do if they don’t agree, and what will happen if they do nothing. Unfortunately, because the math error notices do not clearly articulate what was adjusted and why, taxpayers are often left confused as to what changes have been made to their return, making it difficult for taxpayers to determine whether they agree or disagree with the changes. Many math error notices are vague and do not adequately explain the urgency the situation demands. In fact, in some instances, math error notices don’t even specify the exact error that was corrected, but rather provide a series of possible errors that may have been addressed by the IRS through its math error authority.

If you get an IRS notice, don't ignore it, but also don't assume it is correct. Check with your tax pro right away.

Former NYC council member sentenced to 3 months for tax evasion - Sarah Polus, The Hill. "The former city council member was first elected to the legislative body in 2013. He was booted from the council in April after pleading guilty to filing a tax return that 'included false and fraudulent information concerning his income and business expenses' in connection with his real estate management corporation, according to the Department of Justice (DOJ)."

Teacher Certificate Revocation Based on Fraud in Defraud Conspiracy; Wrong - Jack Townsend, Federal Tax Crimes. "The question addressed was whether the defraud conspiracy was a crime of moral turpitude."

Beer Taxes in Europe - Elke Asen, Tax Policy Blog. "According to EU law, every EU country is required to levy an excise duty on beer of at least €1.87 per 100 liters (26.4 gal) and degree of alcohol content, translating to approximately €0.03 per 330ml (11.2 oz) beer bottle at 5% abv. As this map illustrates, only a few EU countries stick close to the minimum rate; most levy on much higher excise duties." 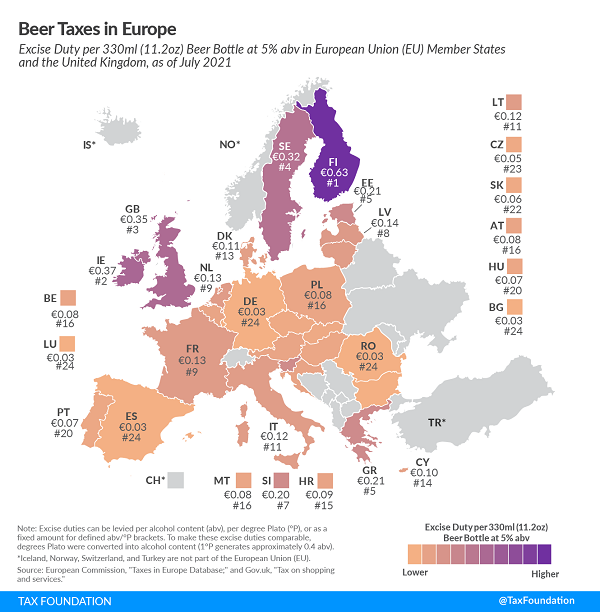 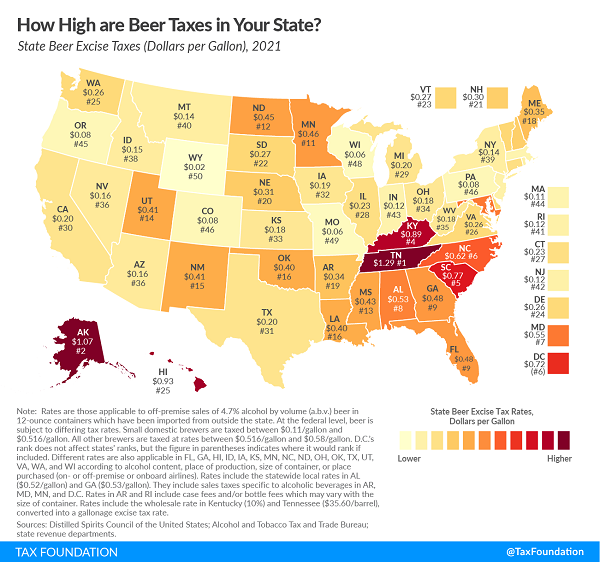 In other words, by my math, Iowans have to drink about a gallon of beer to pay the amount of tax required for a single bottle of beer in Finland. Yet Finland scores high on both happiness and alcohol consumption indexes.

In Thoreau’s case, the lawbreaking was rather limited and the resulting penalties rather modest. And his protest did not, notably, stop the intended machine: It would take a different, internecine war to end the hated institution of slavery.

But the success of Thoreau’s civil disobedience shouldn’t be measured solely against the yardstick of its immediate target. Over the past century and three-quarters, his lawbreaking has inspired legions of political and social activists, including such giants as Mahatma Gandhi and Martin Luther King Jr.

Not paying his tax was a minor inconvenience to Thoreau, but the government is much better nowadays at inconvenience.

Dessert for breakfast works for me. It's National Cheesecake Day!