Mr. Schumer has said he wants to pass both the infrastructure bill and a budget blueprint for the $3.5 trillion legislation, which also is expected to include tax increases on corporations and high-income households, in the coming weeks.

House Speaker Nancy Pelosi (D., Calif.) has said she won’t bring the infrastructure bill up in the House until the broader $3.5 trillion package has passed the Senate, effectively yoking the two bills’ fates together.

The chamber voted 67 to 32 July 28 to begin debate on the bill, only hours after details of a deal reached between President Biden and a bipartisan group of senators were made public. The bill, which would invest $550 billion in a variety of infrastructure projects, is unlikely to come up for a final vote before the week of August 2.

Sinema deals blow to Democrats’ budget reconciliation target - David Lerman, Roll Call. "Party leaders could be whipsawed between moderates like Sinema, who want to keep spending down, and progressives seeking a more robust package. Senate Budget Chairman Bernie Sanders, a Vermont independent, initially sought a $6 trillion budget target, before agreeing to scale it back to $3.5 trillion."

The fate of most Biden administration tax proposals hinges on reconciliation, as otherwise they would need 60 Senate votes to advance. A reconciliation bill can pass with a bare majority.

Trump tries to sabotage the Biden infrastructure deal - Meridith McGraw, Politico. "Though he has increasingly sought to undermine negotiations, Trump’s efforts to derail any infrastructure package have, so far, mostly been met with a shrug on Capitol Hill."

Wilson, who created a $9.2 million overseas trust to which he was the sole owner and beneficiary, failed to timely file his Form 3520, “Annual Return to Report Transactions With Foreign Trusts and Receipt of Certain Foreign Gifts,” and the trust failed to timely file Form 3520-A, "Annual Information Return of Foreign Trust With a U.S. Owner for 2007." The IRS imposed $3.2 million in penalties, representing 35 percent of the distributions from the trust in 2007.

The Form 3520 filing requirements for foreign trusts and beneficiaries are obscure to non-specialists. That obscurity is dangerous, as the foot-fault penalties for not filing them are harsh:

Megan L. Brackney of Kostelanetz & Fink LLP said she was initially pleased with the lower court’s decision because it constrained the IRS from stacking Form 3520 and Form 3520-A penalties. But she added that she had also been troubled by the district court holding.

“Even if the Code permits the IRS to impose penalties, the IRS should exercise its discretion to reach reasonable outcomes that take into account the taxpayer’s specific conduct, the tax loss to the government — if any (as often, there is none, and the failure to report foreign trust activity is merely a technical violation), and the taxpayer’s overall record of compliance, as opposed to the IRS’s current practice of thoughtlessly and reflexively imposing the maximum amount of all possible penalties in every situation,” Brackney said.

Given the punitive IRS approach, anyone involved with a foreign trust should take great care to file Form 3520 and its companion, Form 3520-A.

FBAR Penalties: Another Court Holds that FBAR Penalties Can Exceed the Regulatory Ceiling - Jason Freeman, Freeman Law. "But my how the times have changed.  FBAR penalties are most certainly enforced these days.  Some might argue that they are enforced with a vengeance—a vengeance that is disconnected with the purpose behind the FBAR filing requirement.  Truly, the penalties associated with failing to file an FBAR are among the most punitive civil penalties on the books."

Washington to End COVID-19 Interest, Penalty Waivers September 30 - Washington Department of Revenue via Tax Notes. "Washington Gov. Jay Inslee (D) has announced that effective September 30, a proclamation that ordered waivers of penalties, fees, and interest imposed by the Department of Revenue on taxpayers affected by COVID-19 will be rescinded; the proclamation had been extended multiple times throughout the pandemic, most recently in January."

Nov. 1 is new tax deadline for some storm-struck Michiganders - Kay Bell, Don't Mess With Taxes. "The IRS has announced that Great Lakes State individual and business taxpayers who suffered through severe storms, flooding, and tornadoes that began on June 25 now have until Nov. 1 to file various returns and make payments. The affected counties, per the Federal Emergency Management Agency (FEMA), are Washtenaw and Wayne Counties in the southeastern part of the state." 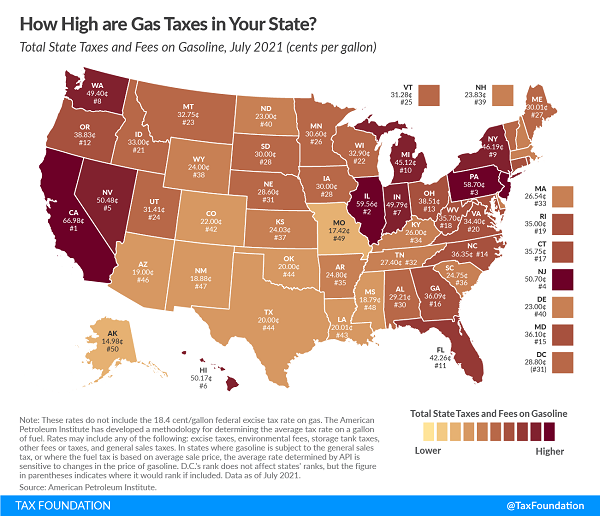 2021 2nd Quarter Published Expatriates - International Tax Blog. "The number of published expatriates for the quarter was 734."

How Did We Ever Agree to Fund Infrastructure Investments? - Erica York, Tax Policy Blog. "The standard approach long utilized by the federal government is to fund infrastructure with user fees, such as gas taxes, with spending and revenue organized into distinct infrastructure trust funds—that approach deserves renewed attention."

Tax Advice for Parents Since Teens Like to Play the Market, Too - Kelly Phillips Erb, Bloomberg:

Investing at a young age has advantages, but kids who may not yet be filing a tax return may be blissfully unaware of the consequences of buying and selling stocks. And you know who may find out first? Parents. That’s because of the kiddie tax.

The kiddie tax only applies to unearned income. Unearned income typically includes investment income like dividends, capital gains, and interest. In contrast, earned income—or income from wages, salary, tips, or self-employment—is not subject to the kiddie tax and is taxed at the child’s rate.

But that fun money that your child may be making with their investments? It could add up on your tax bill. Here’s how it breaks down: If your child is under the age of 19 (or under the age of 24 and a full-time student), your child’s unearned income under $1,100 is not taxed. Your child’s next $1,100 is taxed at the child’s tax rate, and any unearned income over $2,200 is taxed at the parents’ tax rate.

Why Beneficiary Designations Are Critically Important - Cecilia Fernandes and Robert N. Polans, Tax Warrior Chronicle. "Many people mistakenly believe that their last will and testament will direct where their assets go after they pass away. This is only true, however, for “Probate Assets.” Non-probate assets, such as qualified retirement plan assets, traditional and ROTH IRAs, tax-deferred annuities, life insurance policies, and assets within most intervivos trusts, are directed only by your beneficiary designation."

Federal tax law limits how much an individual can put into either a traditional or Roth IRA to $6,000 a year, or $7,000 a year for individuals over 50 years old. So how are some people able to accumulate billions of dollars in the tax-favored vehicles?

The answer is that they can’t if it’s in a rollover IRA, where limits apply. But they can in a contributory IRA, where other assets — namely, difficult-to-value stock in private companies — can be parked.

Wyden points out that most middle-income Americans are excluded from making this kind of investment because they aren’t considered qualified investors. That leaves this avenue to wealth as being more in the province of private equity and hedge funds.

But rather than reforming the "qualified investor" rules to let more people do this, Congress is more likely to make IRA saving more complicated.

According to court records, from 2004 through 2010, Defendant earned combined income totaling over $500,000 but did not pay any taxes those years. The IRS conducted an investigation and notified Defendant that he owed tax for calendar years 2004 through 2010. Defendant took numerous steps to conceal his income and evade his tax obligations. For example, Defendant never maintained his own bank account but deposited his business income into the accounts of others and directed them to make purchases on his behalf and to pay his own personal expenses using funds in the bank accounts of these third parties. The expenditures included rent payments, private school tuition payments, and checks made out to cash.

Paying personal expenses out of business accounts can lead to bigger problems than an IRS exam adjustment and civil penalties.

Some holidays aren't for everyone, but if it's your thing, today is National Lipstick Day! "Throughout the ages, controversy surrounded lipstick. British Parliament banned it in 1770 calling it a devilish attempt to trick men into marriage. In some circles, lipstick was associated with witchcraft."