Tens of millions of checks will go out July 15 to families with children under age 18 as a closely watched IRS begins providing monthly benefits to Americans for the first time.

The checks to the families of 65 million children come from the one-year expansion of the child tax credit adopted in March in the American Rescue Plan Act of 2021 (P.L. 117-2).

A senior administration official told reporters on a July 14 call about the rollout that the first of the monthly payments will actually only go to 35.2 million families, explaining that 1 million families have already opted to unenroll from the advance payments, preferring to receive a lump sum, and that some taxpayers who filed for extensions have run into problems.

Taxpayers may also be opting out because their eligibility for the payments will be verified when on their 2021 tax returns. If their income is too high, they may have to pay back some or all of the payments when they file.

What You Need to Know About Advance Child Tax Credit Payments - Kelly Phillips Erb, Bloomberg. "You generally qualify for advance payments if you have a qualifying child and you—and your spouse, if married filing jointly—have a Social Security number (SSN) or an Individual Taxpayer Identification Number (ITIN)."

Your Child Tax Credit Payment Just Arrived. Are You Sure You Want It? - Laura Saunders, Wall Street Journal ($):

The part of the credit that’s just for 2021—either $1,600 or $1,000 per child—begins to phase out at $75,000 of adjusted gross income for most single filers and $150,000 for most married couples. Above these limits, the taxpayer loses $50 of total credits for every $1,000 of additional income, so the cap varies according to income, number of children and filing status.

You can opt-out of advance payments or get more information at the IRS Child Tax Credit Update Portal.

Democrats seek to make permanent the child tax credit changes that start going out this week - Kay Bell, Don't Mess With Taxes. "In addition, the ARPA law makes the CTC fully refundable, meaning the taxpayers can get any excess credit that's not needed to eliminate a tax bill as a refund."

IRS Security Summit announces summer campaign to raise awareness among tax pros about identity theft; urges practitioners to boost security immunity - IRS. "Through June 30, 2021, there have been 222 data theft reports this year from tax professionals to the IRS, outpacing the rate of 211 in 2020 and 124 in 2019. Each report can impact hundreds of taxpayers and threaten the tax professional's business."

Tax pros are targets for criminals seeking personal identification information for scams and false refund claims. Individuals should also be careful to protect their confidentiality when communicating with their tax pros. Never send your social security number in a text message or e-mail. Don't send copies of tax forms, like W-2s, as unencrypted e-mail attachments. Use your preparer's secure portal, such as My Eide Bailly, to transmit documents electronically.

Related: Why Cybersecurity Awareness in the Workplace is Everyone’s Business.

California Bill Provides Second Golden State Stimulus Payments - Tax Analysts. "California S.B. 139, signed into law as Chapter 71, provides a second round of Golden State Stimulus tax rebate payments — to taxpayers with gross incomes of $75,000 or less — that must be disbursed by the state controller no later than July 15, 2022; depending on a qualified recipient’s filing status, as well as whether they claim dependents, have an individual taxpayer identification number, or did not receive federal economic impact payments, the amount of the payment will be $500, $600, $1,000, or $1,100."

Senate Democrats agree on a budget, but tax details remain a work in progress - Jay Heflin, Eide Bailly. "Tax increases will be a part of that mix, whenever it is announced. Sanders said they will be aimed at corporations and wealthy individuals."

Democratic Senator Joe Manchin, a moderate from West Virginia, told reporters he still needs information on what tax increases are being proposed to fully pay for the plan. Manchin, who hails from a coal-producing state, also said he told Schumer he has a problem with some fossil fuels provisions in the outline.

Thin-Cap Rules in Europe - Thomas Locher, Tax Foundation. "Thin capitalization occurs when companies finance investments and operations through a level of debt far higher than their level of equity. High-tax countries create an incentive for companies to finance investments with debt because interest payments are tax-deductible, while the costs associated with equity financing are most often not." 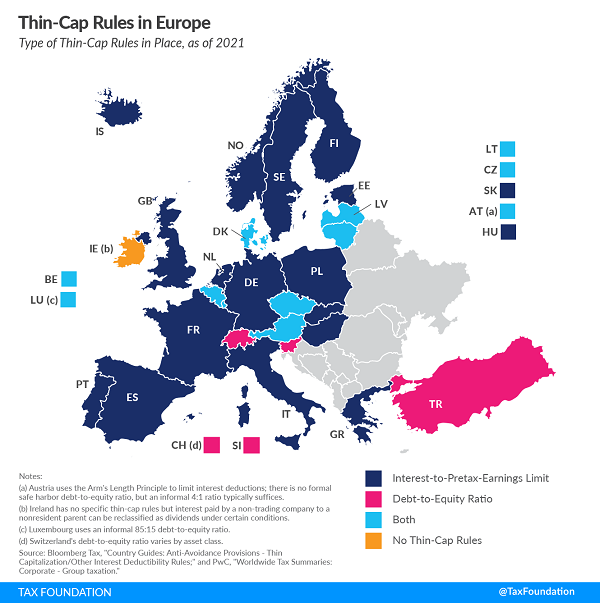 Will You Get Additional Deductions by Working With a Tax Pro? Jason Dinesen. "The tax pros in that Twitter discussion said the same things I say: I almost never find additional deductions, but I sure as heck find things that were done wrong on the tax return in prior years." Examples are provided.

Buy Passport With Bitcoin, Escape Taxes? - Robert Wood, Forbes. "Having a second passport would be nice, but what about people who decide to give up American citizenship along with U.S. taxes? Ironically, that can bring more taxes: the U.S. exit tax."

Tax Court Addresses Basis Reduction Rules When Investment Property Debt Is Discharged - Parker Tax Pro Library. "The Tax Court held that a taxpayer who sold investment properties in the same year he received a discharge of indebtedness for the properties from the mortgage lender, and who properly excluded the discharge from income under the exclusion for qualified real property business indebtedness in Code Sec. 108(a)(1)(D), was required to reduce the bases in the properties in the year of the discharge, rather than the year following the discharge under Code Sec. 1017(a)."

The Rescission Doctrine: Unwinding a Transaction for Tax Purposes - Freeman Law. "What are the tax consequences of unwinding a transaction?  And just when, if ever, is a taxpayer entitled to the transactional equivalent of a mulligan—a do-over?"

According to a July 13 report by the Urban-Brookings Tax Policy Center, think tanks predicted at the start of the pandemic that states would lose billions in tax revenue because of the economic downturn. Report authors Lucy Dadayan and Kim Reuben say state tax collections decreased nearly $61 billion, or 49 percent, in April 2020 compared with the previous year, which was partly attributed to states and the federal government pushing back tax deadlines.

But state revenues have mostly rebounded since then for a few reasons, according to the report, which is based on a survey of state budget officials conducted beginning in February.

Opinion: Time should be up for Iowa's slate of terrible tax credits - John Hendrickson and John C Mozena, Des Moines Register. "Over the course of decades, a succession of governors and legislatures have built a giant structure of special tax credits, abatements and other forms of targeted tax breaks that turn a system intended to raise revenue to fund public services into a mechanism for distributing corporate welfare across the state."

Back in my younger years in the practice of tax law, I heard something like an aphorism or at least a pithy statement meant to suggest some truth that the difference between a doctor and a lawyer cheating on their taxes is that the doctor will file a false return underreporting tax liability (a felony) whereas the lawyer will file no return (generally a misdemeanor).  While there may be some truth in the statement, there is probably not as much truth as those acting on it by failing to file would like to hope.

Not only did Taxpayer fail to show reasonable cause; he testified that he made the choice not to file. Taxpayer claims that he learned during his time in NYU’s LL.M. program that “where you’re uncertain as to how you should respond or report, you’re better off not filing than filing at all.” And when discussing why he had filed other returns late in the past, Taxpayer stated: “[I]t’s better to have a misdemeanor than a felony.” It’s hard to believe that Taxpayer’s decision not to file was done with any other purpose than to evade tax.

The Commissioner wins on this one.

The Moral? File timely, and don't rely on using barrels of ink to hide your income. This is the digital age, after all.

Give! Today is National Give Something Away Day. "The day encourages people to give freely to others without expecting anything in return. This is also a good way to declutter and pass on things that no longer fit us or are useful to us."