Senate Budget Committee Democrats appear on the cusp of agreeing to spending and revenue numbers on a multi-trillion-dollar budget resolution, though that would just be a step in a process expected to consume the next four weeks.

But Senate Budget Committee member Sheldon Whitehouse, D-R.I., cautioned that once the 11 budget panel Democrats reach agreement, they will have to negotiate final budget resolution numbers with the other 39 Senate Democrats.

With the barest working majority, the Democratic leadership has its work cut out.

Senate Democrats, White House agree on $3.5 trillion budget package - Lindsey McPherson, Roll Call. "Although Warner announced that the $3.5 trillion will be 'fully paid for,' it’s not clear how much of that will be from new revenues and how much would be from other savings."

For tax years beginning January 1, 2022, H.B. 2838 allows a partnership or S corporation to elect to pay a 4.5 percent tax on its taxable income that is attributable to the entity’s resident partners or shareholders “and the portion of its taxable income derived from sources within this state that is attributable to its nonresident partners or shareholders.” Eligible partners and shareholders — which must be individuals, estates, and trusts — that don't opt out of the election are allowed a personal state income tax credit equal to the portion of the tax paid on their share of passthrough income.

Connecticut Enacts Mileage-Based Tax on Trucks - Lauren Loricchio, Tax Notes ($). "The tax is calculated based on a vehicle’s gross weight and the number of miles driven in Connecticut, according to an analysis of the bill. It will range from 2.5 cents per mile for vehicles weighing between 26,000 and 28,000 pounds to 17.5 cents per mile for vehicles weighing over 80,000 pounds, according to the analysis."

The Internal Revenue Service announced today it will issue another round of refunds this week to nearly 4 million taxpayers who overpaid their taxes on unemployment compensation received last year.

The American Rescue Plan Act of 2021, which became law in March, excluded up to $10,200 in 2020 unemployment compensation from taxable income calculations. The exclusion applied to individuals and married couples whose modified adjusted gross income was less than $150,000.

Refunds by direct deposit will begin July 14 and refunds by paper check will begin July 16. The IRS previously issued refunds related to unemployment compensation exclusion in May and June, and it will continue to issue refunds throughout the summer.

This saves qualifying taxpayers the expense of amending returns. The Announcement also explains when taxpayers should amend - for example, if they now qualify for the earned income credit for 2020 now that their unemployment compensation is non-taxable.

Most Partnerships Are Staying in the Centralized Audit Regime - Kelly R. Taylor, Tax Notes ($). "A pattern has emerged from three years of tax filings showing that most partnerships have opted into the centralized partnership audit regime, according to an IRS official."

Of course, most partnerships have no choice, as even a single grantor trust or LLC as an owner disqualifies a partnership from opting out.

Census Data Shows Households Saved Economic Impact Payments - Erica York, Tax Foundation. "According to the household survey, a larger share of the first round of EIPs went toward spending than the second and third rounds. Of the households that reported receiving the first round of payments, 75 percent responded that their EIPs would be mostly spent, while just 11 percent responded mostly saved. The share of households mostly saving their payments increased to 26 percent in the second round and 32 percent in the third round, while the share of payments mostly spent decreased." 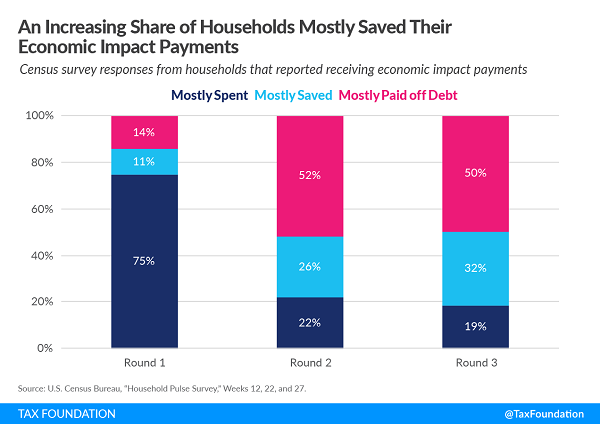 The Current State of Taxpayer Service (or Lack Thereof) at the IRS - Nina Olson, Procedurally Taxing. "The National Taxpayer Advocate has reported (Figure 2, Filing Season Report) that for Filing Season 2021, through May 21, 2021, the IRS received 148 million individual income tax returns and processed 135.7 million such returns.  The remaining 12.3 million were stuck in various stages of review.  This number under review is almost twice the number of returns unprocessed at the end of the 2020 filing season (6.3 million were suspended as of July 15, 2020)."

Why Sales Tax Holidays Are A Headache for Tax Administrators, Shoppers, And Retailers - John Buhl, TaxVox. "Sales tax holidays are here to stay. But the next time you see an ad for one, just know that you probably won’t save any money and the unfortunate IT specialists who program your local retailer’s software are probably working overtime."

No Reasonable Cause for Late Filing and Payment Even Though Attorney Embezzled Funds Meant to Pay the Tax from the Client and Did Not File the Returns - Ed Zollars, Current Federal Tax Developments. "The Fifth Circuit Court of Appeals upheld a lower court ruling that a taxpayer did not have reasonable cause for late filing of his tax returns when the attorney he had hired to handle such affairs while the taxpayer was incarcerated had embezzled the funds meant to be used to pay the taxes and had not filed the returns in question."

The town of Lantana, Florida, is demanding that Sandy Martinez pay it $165,000 in fines, which is nearly four times her annual income and more than half what her house is worth. The municipal code violations that led to those fines are decidedly less impressive: driveway cracks, a storm-damaged fence, and cars parked on her own property in an "unapproved" manner.

The Institute for Justice, which represents Martinez, says the case epitomizes "taxation by citation," the perverse practice of using code enforcement to raise revenue rather than protect public safety.

Tax Court imposes minimum reasonable compensation on a C corporation. S corporations have been battling with the IRS for years over whether they pay their officers too little. Because S corporation K-1 income is not subject to FICA and Medicare taxes, owners are tempted to minimize salaries and take earnings as S corporation distributions to avoid these employment taxes.

The Tax Court yesterday addressed a twist to this idea by imputing salary income to C corporation shareholders.

There is no written agreement as to the purpose of the management fees, but Hacker Corp. did pay total salary to the Couple from 2005 through 2008 of $73,848, $40,000, $53,847, and $58,462, respectively, for services provided to Hacker Corp., which were arguably for management of petitioner. Petitioner asserts that whatever services the Couple performed for Blossom Day Care Centers were actually provided under a purported oral management agreement between petitioner and Hacker Corp. for the benefit of Blossom Day Care Center, and it was not petitioner's responsibility to provide reasonable compensation to its corporate officers, the Couple, for services provided to petitioner.

There are some red flags here already. The FICA base for individuals for 2005 was $90,000; the amount paid the couple by the S corporation was less than that. Also, management fees paid under an "oral agreement" are not a good idea.

Petitioner has stipulated that the Couple were corporate officers during all of the calendar quarters and years 2005 through 2008. Both provided substantial services far beyond minor services, and both directly and indirectly received remuneration for their services. Wife was petitioner's 51% shareholder and acted as president of the corporation and director of curriculum and education for all six child care locations and supervised over 90 employees and students of those centers. Husband was 49% shareholder and acted as vice president, secretary, and treasurer; as director of Blossom Day Care Centers; and as director of accounting and finance for petitioner. Both Husband and Wife had check-signing authority over petitioner's bank accounts and credit card authorization in their corporate capacity.

In addition, Husband's daily responsibilities included but were not limited to depositing parents' payments for child care and personally writing all of the payroll checks to petitioner's 90 employees. Both Husband and Wife provided numerous services to petitioner, any one of which could be considered substantial. Both received direct and indirect remuneration in the form of cars for themselves, a Lexus and a Hummer; cars for their children and relatives; credit cards; and access to all cash distributions.

Those management fees would contribute to S corporation K-1 income and therefore be distributed to the owners by the S corporation free of employment taxes.

The result: the IRS assessed over $347,000 in federal employment taxes over four years, plus 20% "accuracy related" penalties.

The moral? The taxpayers appear to have tried to get too cute by funneling compensation from their C corporation through an S corporation by way of management fees. By not having a management fee agreement in writing, by not carefully documenting work done through the management company, and by having company cars in the C corporation, they made it easier for the IRS to challenge the arrangement. As it is written in Reilly's Laws of Tax Planning, "Execution isn't everything, but it's a lot."