Also: "It’s remarkable how small some of those backdated deals were in the allegations against Lewis, [Anson] Asbury added. For example, some of the emails quoted in the indictment involved $25,000 or $50,000 payments."

In abusive "micro-captive" structures, promoters, accountants or wealth planners persuade owners of closely held entities to participate in schemes that lack many of the attributes of insurance. For example, coverages may "insure" implausible risks, fail to match genuine business needs or duplicate the taxpayer's commercial coverages. But the "premiums" paid under these arrangements are often excessive and used to skirt tax law. Additional information can be found at IRS offers settlement for micro-captive insurance schemes; letters being mailed to groups under audit. Recently, the IRS has stepped up enforcement against a variation using potentially abusive offshore captive insurance companies domiciled in Puerto Rico and elsewhere.

Also: "Potentially abusive use of the US-Malta tax treaty" and "Improper claims of business credits."

Rep. Kevin Brady (R-Texas) on Wednesday said he thinks it will be challenging for Congress to sign off on an international tax deal, as the Biden administration seeks to make progress on such an agreement this week.

"I think this is frankly years from being done, and I'm confident that Congress will reject any tax agreement that advantages foreign companies and workers over U.S. companies, or surrenders a key part of America's tax base that we'll need frankly to pay for our government services going forward," Brady, the top Republican on the House Ways and Means Committee, said on a call with reporters.

If it is "years" from being done, it's vulnerable if control of either the House or Senate shifts in 2022.

A new set of FAQs from the IRS answer:

When Free Isn’t Free: Your Guide to Fringe Benefits at Work - Kelly Phillips Erb, Bloomberg Tax. "The good news: Gifts aren’t subject to income tax. The not-so-good news: The general rule is that an employer cannot make a gift, as it’s almost always considered compensation. This is true even if the gift is not from the company but from the owner of the company. For example, if I gave my paralegal a car, the IRS would typically consider that compensation, even if it didn’t come from my law firm. The idea is that our relationship is tied to the employment relationship."

Watch out — too much tax deferral can backfire on small business owners - Bill Bischoff, MarketWatch. "So, the question for the day is: should you take full advantage of all the federal-income-tax-deferral opportunities that you may still have available for an extended 2020 return and that you definitely still have available for your 2021 return? Answer: maybe not. Please keep reading for reasons why."

An analysis from the Agricultural and Food Policy Center of a similar proposal to repeal step-up in basis and tax capital gains at death found that as many as 98 percent of family-owned farms could be impacted, resulting in an increase in tax liability of more than $700,000 on average.

How High Are Property Taxes in Your State? - Janelle Cammenga, Tax Policy Blog. "Because property taxes are tied to housing values, it makes sense that the actual dollar amounts of property taxes tend to be higher in places with higher housing prices. This map takes housing value into account to give a broader perspective for property tax comparison." 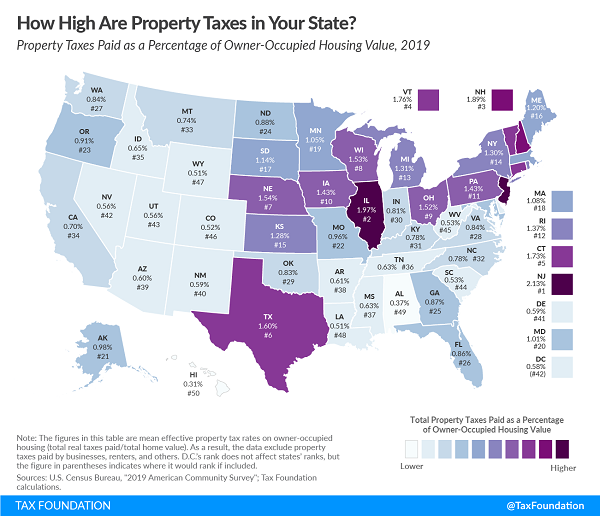 Tax-Exempt Hospitals and Charity Care: Should Those Hospitals Do More? Renu Zaretsky, TaxVox. "Could tax-exempt hospitals—especially larger, well-resourced ones like Ballad—simplify the process for patients needing charity care? Could they do a better job working with uninsured patients to settle debts?"

Christian Group That Battled IRS Receives Exemption After All - Fred Stokeld, Tax Notes ($). "Christians Engaged, which encourages Christian involvement in civic affairs, has received exemption as an organization described under section 501(c)(3), according to a July 7 release from the First Liberty Institute, which represented Christians Engaged when the group appealed the proposed denial."

So does the IRS come up smelling like roses?  Hardly.  The IRS didn’t explain why Christians Engaged didn’t receive 501(c)(3) status to begin with.  Had I formed a new charity (and complied with all the minutiae regarding 501(c)(3) organizations) titled, “Ultra Liberals Engaged,” does anyone think that I wouldn’t have quickly received approval?

So the IRS comes up smelling like the Crown Imperial plant.  You haven’t heard of this plant?  It’s “a dazzling and unique member of the Lily family…In addition to adding visual interest, these flowers…have a potent, musky scent almost like a skunk….”

I had the honor and privilege to participate with practitioners, tax faculty and AICPA exam staff recently to work on a model curriculum that ties to the next version of the CPA exam, referred to as CPA Evolution. The purpose of the revision is to better reflect how CPAs operate in today's global, digital environment where accounting, audit, tax compliance and planning, and technology are all important.

The exam will have a core that everyone takes with a foundation of accounting, audit, tax, business law, ethics and technology. Then prospective CPAs take one of three discipline exams:

This exam is expected to launch in 2024.

Well, now that they let exam takers take only one section at a time, I guess anything goes. Letting people test on what they will actually practice in! Kids today, they don't know what a real CPA exam is! Hundreds of people in a room with a smoking area, the smell of defeat and despair in the air...

You can't be young forever, but you can always be immature. So today is Be A Kid Again Day!