The IRS tax data leak - Tyler Cowen, Marginal Revolution. A short take that I think gets to the heart of the publication of wealthy taxpayer IRS data by ProPublica:

ProPublica acted unethically, and in fact nothing fundamentally new or interesting or surprising was learned from their act as accessory.

The real story is how the numbers were obtained, and here I fear the worst.  A single rogue agent can’t just pull up the files of rich people on demand, as I understand the system (if so, Trump’s return would have leaked a long time ago).  So this was probably a coordinated effort of some sort, is it crazy to suspect the Russians having some role in it?  Who else has the will and ability?  (China has the ability, but the “coddled rich people” meme is not one they are looking to push.)  What other breach of national security has occurred in the process of unearthing this information?  How was it done?  Are conspiracy theories becoming more true these days?

It is stunning to me how little consideration these issues are being given and how poorly so much of our MSM has performed.

Major outlets that focus on the implications of the leak for taxing the wealthy, instead of the unprecedented and still-unexplained breach of IRS data security, are missing the story.

Bipartisan group avoids partisan hurdles in infrastructure talks - Lindsey McPherson, Roll Call. "Members of a bipartisan Senate group negotiating a fallback infrastructure plan say they will avoid tax increases and user fees, but include climate-related spending, in a bid to get past obstacles that have tripped up progress on a $1 trillion-plus package thus far."

The corporate tax increases proposed by the Biden administration were included in his infrastructure proposal.

Bipartisan Senate group rules out tax hikes on infrastructure - Jordain Carney, The Hill. "Sen. Jon Tester (D-Mont.), who is in the bipartisan group, said tax increases are not under consideration as senators attempt to reach consensus on how to pay for their plan."

Broad-Based Taxes on Consumption and User Fees Are Efficient Ways to Raise Federal Revenue for Infrastructure - Garrett Watson, Tax Policy Blog. "As American Enterprise Institute economist Kyle Pomerleau argues, user charges are efficient sources of revenue because they price in the externality associated with driving, such as pollution, and can help encourage reduced driving during peak hours of use."

Biden Would Raise Taxes Substantially for High Income Households and Corporations, Cut Taxes for Families with Children, According to A New TPC Analysis - Howard Gleckman, TaxVox: 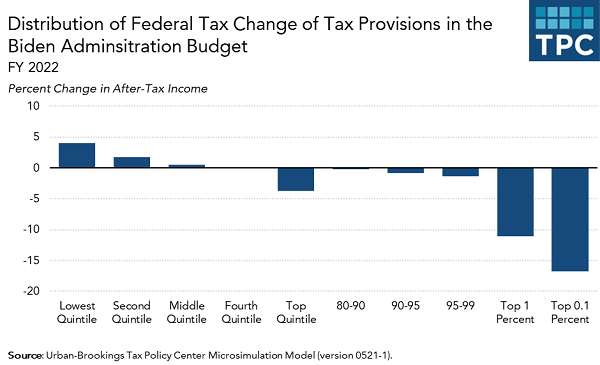 Tax Changes Complicate Deal Strategies and Diligence - Emily Foster, Tax Notes ($). "Like last fall’s frenzy of deals spurred by a concern that tax rates might soon go up, Parker said businesses are considering adjusting their deal plans and models this year ahead of changes that could be effective in 2022."

Estate Planners Better Prepared to Track Basis if Needed - Jonathan Curry, Tax Notes ($). "However, Jeffrey N. Pennell of the Emory University School of Law said people still often don’t keep precise records, especially for family assets like a closely held business or farm, or pieces of artwork. 'You have no idea what the basis of that is,' he said."

Massachusetts lawmakers send ‘Fair Share Amendment’ tax hike on millionaires to 2022 ballot - Benjamin Kail, Masslive.com. "If residents vote in favor next year, the state government in 2023 will impose a 4% surtax on household income exceeding $1 million. Massachusetts has long had a flat income tax rate of about 5%, and the most recent push by state lawmakers to shift more of the tax burden on wealthy residents comes as the Biden administration and Congress consider similar alternatives with federal income taxes."

As most businesses now operate as pass-throughs, with their income taxed on owner 1040s, this amounts to an 80% increase income tax on a large portion of Massachusetts business income.

Louisiana Legislature Passes Mobile Workforce Bill - Lauren Loricchio, Tax Notes ($). "The bill is based on model mobile workforce legislation developed by the Council On State Taxation, though COST's model uses a 30-day threshold. The bill as introduced also used a 30-day threshold, but it was amended by Allain to reduce the threshold to 25 days to address concerns raised by some legislators. "

What You Need to Know About the G-7 Tax Agreement - Kelly Phillips Erb, Bloomberg Tax. "With respect to Pillar Two, there was an agreement to establish a global minimum corporate tax rate of 15%. The current corporate tax in the U.S. is 21%. In contrast, Ireland’s current corporate tax—where many U.S. companies like Apple have established headquarters—is just 12.5%."

The G-7’s Global Tax Deal Faces a China Test - James Areddy, Wall Street Journal ($). "Given its past support for global efforts to tighten tax governance, there is a likelihood it will support the G-7 proposal, says Henry Gao, an expert in Chinese trade and law at Singapore Management University."

Tax to-do's after you say 'I Do' - Kay Bell, Don't Mess With Taxes. "1. Make sure everyone knows your new name. After marriage, some spouses change their surnames. If either, or both of the newlyweds legally change their name post-vows, they need to report it to the Social Security Administration (SSA). The Internal Revenue Service matches what's on your 1040 with the SSA data every filing season. If your new name on your return doesn't match the official SSA info, it could delay any refund from your first post-wedding tax filing."

Families of 88% of children in the U.S. will automatically receive monthly CTC payments - National Association of Tax Professionals Blog. "The increased CTC payments will be made on the 15th of each month unless the 15th falls on a weekend or holiday. Families who receive the credit by direct deposit can plan their budgets around receipt of the benefit. Eligible families will receive a payment of up to $300 per month for each child under age 6 and up to $250 per month for each child age 6 and above. "

Mark it down. Today is National Ballpoint Pen Day, honoring the newfangled technology that threatens the future of the blotting paper industry while making ink blotting a lost art.