Scott, D-Ga., in a statement called the proposal to tax capital gains at the time of a person's death “untenable” and said exemptions that would allow farmers and ranchers to delay tax payments on intergenerational land transfers are inadequate.

Biden, Capito Seek Progress in Infrastructure Talks - Andrew Restuccia and Eliza Collins, Wall Street Journal ($). "The meeting, which lasted about an hour, concluded with no public comment from Mr. Biden or Sen. Shelley Moore Capito (R., W.Va.). A White House official said they plan to speak again this week, in the face of growing doubts that a deal is likely amid sharp disagreements in the size of any package and what taxes or fees should be used to pay for it."

IRS reminds taxpayers living and working abroad of June 15 deadline - IRS. "his deadline applies to both U.S. citizens and resident aliens abroad, including those with dual citizenship."

U.S. to Levy Tariffs Over Digital-Service Tax, but Suspend Implementation - Yuka Hayashi and Paul Hannon, Wall Street Journal ($). "The proposed U.S. tariffs of 25% would target imports worth nearly $2 billion from the six countries, including imports worth over $800 million from the U.K. and more than $300 million each from Italy and Spain."

Illinois Legislature Passes SALT Deduction Cap Workaround - Evan Fallor, Tax Notes ($). "The U.S. Treasury Department and the Internal Revenue Service have essentially given the go-ahead on such workarounds in Notice 2020-75, released in November 2020. The other states to adopt similar workarounds are Alabama, Arkansas, Louisiana,;Maryland, New Jersey, Oklahoma, Rhode Island, and Wisconsin. Connecticut, the first state to enact an entity-based SALT cap workaround, is the only state to make its entity-level tax mandatory."

Ireland to Extend Tax Relief for Businesses Post-Pandemic - Kiarra Strocko, Tax Notes. "The Irish government has announced plans to extend the reduced VAT rate for the tourism and hospitality sector and the tax debt warehousing scheme to aid businesses that are struggling because of the COVID-19 pandemic."

The IRS has issued a private letter ruling to a male same-sex married couple regarding the status of various medical costs and fees arising from in vitro fertilization (IVF) procedures, gestational surrogacy, and related items as medical care under Code § 213...

The IRS concluded that the couple’s costs and fees relating to egg donation, IVF procedures, and gestational surrogacy would not qualify as medical care expenses. The IRS explained that only expenses directly attributable to the diagnosis, cure, mitigation, treatment, or prevention of disease, or for the purpose of affecting any structure or function of the body of a taxpayer, the taxpayer’s spouse, or the taxpayer’s dependent qualify as medical care expenses of the taxpayer under Code § 213(d).

How Well-Funded Are Pension Plans in Your State? - Janelle Cammenga, Tax Policy Blog. "Pension plans in South Dakota and Wisconsin were in the best shape that year, with funded ratios of 99 and 96 percent, respectively. Idaho was close behind with a 94 percent ratio." 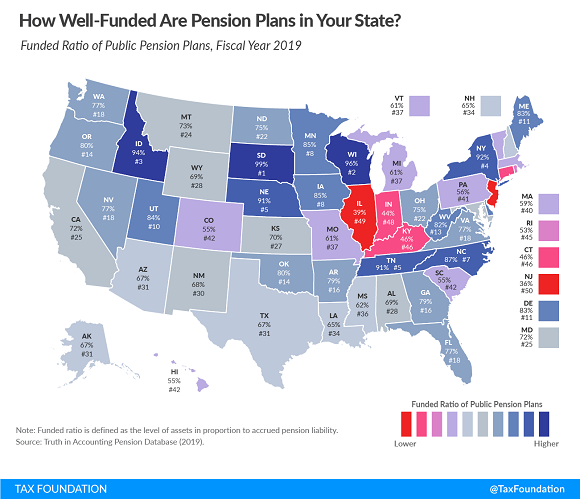 $5,000 electric vehicle tax credit hike clears Senate panel - Kay Bell, Don't Mess With Taxes. "The added $5,000 in tax credits would come from $2,500 for autos built by union members and $2,500 for vehicles assembled in the United States."

What to do if someone missed the May 17 deadline to file and pay taxes - National Association of Tax Professionals Blog. "If your client, an individual taxpayer, is owed a refund, there’s no penalty for filing late. On the other hand, tax owed and not paid by May 17, 2021, is subject to penalties and interest."

Are State Tax-Credit Scholarships The Best Way to Support School Choice? - Renu Zaretsky, TaxVox. "So far, 18 states have established these credits, so called "tax-credit scholarship programs.” Businesses or individuals get a credit of up to 100 percent for donating to nonprofit organizations that provide scholarships to private school students."

Supreme Court Decision Allowing Suit for Relief from Reporting Requirements - Elizabeth Barber, Eide Bailly. "For taxpayers, this ruling narrows the scope of the application of the Anti-Injunction Act, allowing preemptive legal challenges to certain reporting or other requirements that are separate from, but backed by, a tax penalty. It does not reverse or remove the reporting requirements under Notice 2016-66 for taxpayers or material advisors."

Petitioner testified credibly that he was not capable of handling his business because of his illness and not being able to read during 2016 and that he relied upon others. Petitioner's illness affected his ability to file a timely tax return for 2016. Once petitioner learned of problems regarding his 2016 taxes, he sought a new tax preparer. He also learned to read in 2018. Petitioner has shown reasonable cause, and therefore he is not liable for an addition to tax pursuant to section 6651(a)(1).

If your first-grader uses this as an argument for not studying, you can reply that the taxpayer was only in Tax Court in the first place because of allegations that his (presumably literate) co-owner stole $166,000 from his business. Be sure to note that the taxpayer's subsequent learning to read was noted favorably. Tax penalties notwithstanding, literacy pays.