Biden Tax Hikes Are Hitting Resistance, With ‘No Room for Error’ – Nancy Cook and Laura Davison, Bloomberg ($).  "Weeks after President Joe Biden pitched the first major set of tax increases since 1993, signs are mounting that anxiety among congressional Democrats will significantly temper any increases that manage to pass Congress. ‘We are trying to identify a menu of options’ that can pass, Senator Chris Van Hollen of Maryland said in an interview. ‘You need to get every one of your 50 Democratic Senators on board. There is no room for error.’

The Treasury Department is slated to release the administration’s most detailed tax proposals yet, in a report known as the Green Book. But congressional staff are already paring down the ideas that have been floated and fine-tuning them to make them workable from both policy and political standpoints, a Democratic aide said on condition of anonymity.

With the economic recovery still leaving more than 8 million Americans without jobs compared with before the coronavirus pandemic, some Democrats are wary of criticism that higher taxes could damage growth. Moderate Democrats in the House -- vital to holding the party’s slim majority in next year’s elections -- are well aware of Republicans’ success in tarring the Obama administration’s spending and tax plans in the 2010 midterm elections.

TCJA Serves Up Lessons for Democrats’ Infrastructure Ambitions – Jonathan Curry, Tax Notes ($). “Already, on the tax side, some Democrats have said they’re uncomfortable with elements of the Biden plan, like the proposed 28 percent corporate tax rate, the proposal to tax capital gains as ordinary income above a $1 million threshold, and the proposal to end stepped-up basis at death above a $1 million threshold. Jorge E. Castro of Miller & Chevalier Chtd. warned that it doesn’t take much to derail momentum, noting that the weak April jobs report from the Department of Labor was enough to prompt a major public affairs response from the White House to calm concerns about raising taxes if the economy is weak.”

[White House press secretary Jen] Psaki said that the counteroffer reduced funding for broadband expansion to match a Republican offer spearheaded by Sen. Shelley Moore Capito (R-W.Va.) and also reduced proposed investments in roads, bridges and other major infrastructure projects. Additionally, the counterproposal shifted investments in research and development, supply chains, manufacturing and small business out of the infrastructure negotiations and into other ongoing legislative efforts, including the Endless Frontiers Act and the Chips Act, Psaki said.

Question: Will a lower price tag mean fewer tax increases needed to pay for the bill?

Answer: White House is not saying, based upon its memo on its infrastructure compromise.

Biden Counterproposal on Infrastructure Skips Tax Details – Jonathan Curry, Tax Notes ($). “The White House is prepared to temper its expectations for an infrastructure package to gain the support of Republican lawmakers, but it won’t specify where it intends to budge on how to pay for the proposal.”

Biden Sends Republicans New Infrastructure Offer, but a Gulf Remains – Jim Tankersley and Nicholas Fandos, New York Times. “The Biden administration sent Senate Republicans an offer on Friday for a bipartisan infrastructure agreement that sliced more than $500 billion off the president’s initial proposal, a move that White House officials hoped would jump-start the talks but that Republicans swiftly rejected.”

The president’s new offer makes no effort to resolve the even thornier problem dividing the parties: how to pay for that spending. Mr. Biden wants to raise taxes on corporations, which Republicans oppose. Republicans want to repurpose money from Mr. Biden’s $1.9 trillion economic aid package, signed in March, and to raise user fees like the gas tax, which the president opposes.

No Bridge in Sight for Biden Infrastructure Plan – Richard Rubin, Wall Street Journal. “Prospects look dim for bipartisan agreement on an infrastructure-spending bill as lawmakers argue over the basic questions of what should be included, how large it should be and how to pay for it […] The bipartisan discussions have had a soft Memorial Day deadline, perhaps leading to another week of back-and-forth before Democrats start trying to assemble votes on their own.”

A partisan strategy wouldn’t guarantee that the entire White House plan could become law; Democrats have slim majorities in the House and Senate, and they would need to figure out just how much taxing and spending those lawmakers can accept.

The Tax Policy Center has created a cheat sheet to compare President Joe Biden’s tax campaign promises versus what he proposed.

Conservative group targets Biden IRS plan – Hans Nichols, Axios. “A conservative anti-tax group views President Biden’s proposal to increase funding for the Internal Revenue Service as a means to sink his tax-and-spend infrastructure package. Why it matters: By launching a six-figure cable and local TV buy for an ad against first-year Rep. Carolyn Bourdeaux (D-Ga.) and Rep. Conor Lamb (D-Pa.), the group is testing a broader potential line of attack against the $2.3 trillion package […] The ad is being run by the Coalition to Protect American Workers, a group with ambitions of raising up to $25 million to prevent the plan from passing Congress.”

Increasing the Capital Gains Rate: Tax Planning in a Time of Flux – Maria Sapirie, Tax Notes ($). “Anticipating President Biden’s proposed increase in the capital gains tax rate, taxpayers are deciding whether and how to accelerate gains or how to defer them after an increase for as long as possible. The uncertainty around the timing and extent of the increase, as well as other important details that will need to be established during the legislative process, makes short-term decisions a challenge for taxpayers who might meet the threshold for the proposed higher rate. But if the rate goes up, deferral strategies will become more valuable in accordance with the size of the increase.”

As Congress returns to funding earmarks, who will benefit? – Kevin Freking and John Mone, Associated Press. “Don’t tell Laura Fields that providing $1.7 million to her flood-prone neighborhood would be wasteful spending. Her home in a Houston-area subdivision was filled with 10 inches (25 centimeters) of water during Hurricane Harvey. ‘The stress of that was just horrific,’ Fields said. ‘You know, to see fish swimming through your house, it’s not a good feeling,’ The money sought by her congressman, Republican Rep. Dan Crenshaw, to improve drainage and flood prevention in Huffman, Texas, is among thousands of requests that lawmakers have submitted as Congress begins to lift a moratorium on targeted federal spending, often referred to as earmarks.”

Earmarking — often called “pork barrel” spending because lawmakers would divert funds to pet projects in their states — was put on hold a decade ago. Critics thought too many projects went to a handful of powerful lawmakers and fostered a ‘pay to play’ culture in which campaign contributions were often solicited from lobbyists and others. Now, earmarks are marking a sudden and robust return, revamped and renamed. Lawmakers in both parties have grown frustrated by their inability to shape spending legislation and worry that Congress has ceded too much of the power of the purse to the executive branch.

FYI: Earmarks can be instrumental in garnering support for non-spending bills, like tax legislation.

State & Local Aid is On Its Way, But Is It Needed? – Committee for a Responsible Federal Budget. “Last week, the Department of Treasury issued guidelines for the allocations of $350 billion of direct state and local aid funds in the American Rescue Plan (ARP). We estimate roughly $235 billion will be issued this month, and $115 billion in a second tranche next year. In total, Congress has allocated around $900 billion to state and local governments and entities through various COVID relief bills. According to the Bureau of Economic Analysis (BEA), total state and local revenue last quarter was roughly 7 percent above pre-pandemic levels before accounting for federal aid and 11 percent higher inclusive of federal aid. Declines in COVID cases, economic recovery, and additional aid is likely to lift state and local revenue collections even further.” 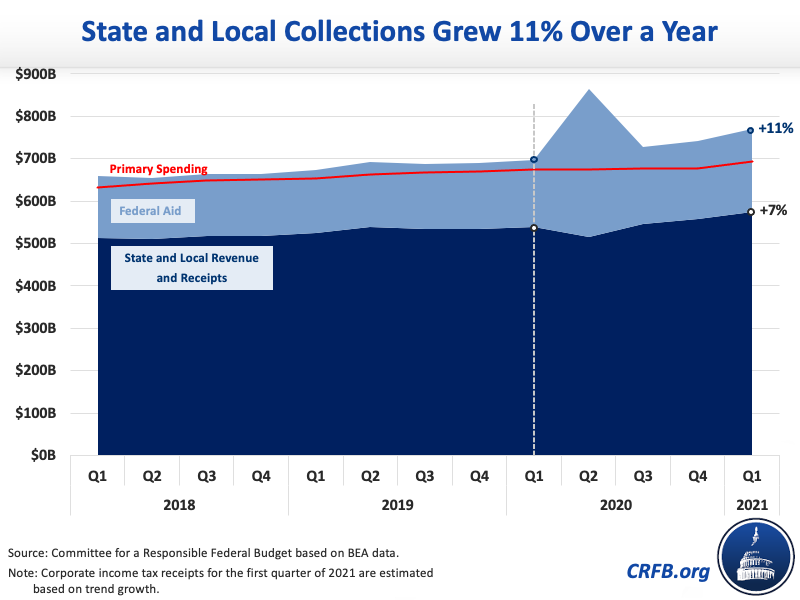 Randi Reid, who advocates on behalf of states conforming to the Streamlined Sales and Use Tax Agreement (SSUTA), told the pact’s governing board that some members of Congress continue to harbor doubts about the Wayfair decision and the way some states have adjusted their sales tax codes to reflect the principles established by the Supreme Court. In particular, she said, some members believe the states haven’t done enough to reduce tax compliance burdens on remote sellers.

Oracle, Microsoft May Seek Tax Refunds, Massachusetts Court Says – Aysha Bagchi and Adrianne Appel, Bloomberg ($). “Tech companies Oracle and Microsoft are eligible to seek a refund of a portion of the sales taxes they paid for their software to Massachusetts, the state’s high court found in a closely watched case about multistate sales tax apportionment.”

Louisiana Tax Panel Can Overrule County Assessors, Court Rules – Adrianne Appel, Bloomberg ($). “The Louisiana tax commission has the power to reset certain property assessments by county assessors, the Louisiana Supreme Court ruled in a case that tested the authority of the state taxing board. But the tax commission overstepped its authority by correcting a 2017 property assessment even though the homeowners had bypassed the normal appeal process, the court ruled in a May 20 opinion that reversed in part and affirmed in part a decision of the 19th Judicial District Court.”

DeSantis signs Florida 'tax holidays' into law – Celine Castronuovo, The Hill. “Florida Gov. Ron DeSantis (R) on Friday signed into law ‘tax holidays,’ or suspensions of taxes, for products such as back-to-school supplies and certain activities in order to encourage spending in the state following the loosening of coronavirus restrictions.  The legislation, which will include a ‘Freedom Week’ from July 1 to 7, was signed during a ceremony in Pensacola, Fla.”

Global Tax Revamp Gathers Pace as Europe Salutes U.S. Plan – William Horobin, Bloomberg ($). “A U.S. proposal for a global minimum corporate tax of at least 15% met with an enthusiastic reception in Europe, bringing the world closer to a deal on sweeping changes to how much multinationals pay, and to which governments. ‘This is really a big progress,’ German Finance Minister Olaf Scholz said as he arrived for a meeting with European counterparts in Lisbon, minutes after his French counterpart had also offered a positive reaction. ‘We will really have the chance that in this summer this deal and agreement that we were working for so long can happen.’”

BI policy analysis: Transfer pricing and tax court – Bloomberg ($). “IRS challenges to multinational tax planning will probably increase. Biden’s request for $80 billion to be added to the IRS budget will, if granted as we expect, intensify the tax scrutiny of cross-border businesses. In the last year of Barack Obama’s presidency, almost 1% of corporate tax returns were audited. By 2018, the most recent year for which we have data, only 0.06% of corporate tax returns were examined. Chief among the Yellen Treasury Department’s goals may be challenging companies’ transfer pricing. Biden needs to increase federal tax revenue to pay for a large infrastructure package and to pay down the U.S.’s high levels of public debt.” 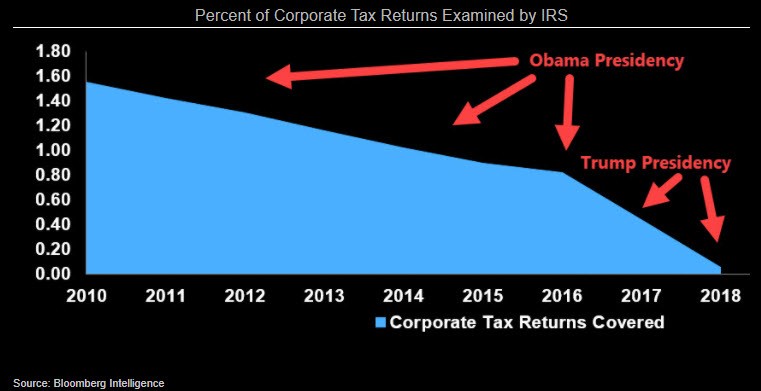 It’s National Brothers Day, Bro! The calendar gods have set aside a day to celebrate a person who probably menaced you while growing up. (I know mine did.) Celebrating this day includes reminiscing. Sure. Let’s reminisce about the time my big brother locked me in a dark closet.