IRS chief says agency is close to clearing backlog of 2019 tax returns – Naomi Jagoda, The Hill. “IRS Commissioner Charles Rettig on Wednesday estimated the agency would be able to clear its backlog of 2019 tax returns within 60 days. During a Senate Appropriations subcommittee hearing, Rettig said that there are 335,000 tax returns that were filed last year that the agency still has to work through. That backlog has declined since the beginning of the year, when the agency had to get through about 7 million returns.”

Treasury hopes for billions from cracking down on ghost preparers – Michael Cohn, Accounting Today. “Investing more in tax compliance, including regulating preparers, beefing up cryptocurrency reporting, and modernizing old IRS technology, would yield $700 billion in tax revenue over the next decade, according to a new report.”

Treasury Makes Case for Bigger IRS to Catch Bigger Fish – William Hoffman, Tax Notes ($). “The Biden administration’s plan to cut the annual tax gap would double the IRS’s size while offering it unprecedented visibility into Americans’ financial assets and transactions. A 10-percent-a-year increase in the IRS budget (ending in fiscal 2031 with around $26 billion annually) would support annual tax agency employment growth of up to 15 percent, expanding the IRS from about 80,000 workers now to as many as 166,000 in 2031, according to a Treasury report released May 20.”

Biden Bank Reporting Plan Seeks to Expose Tax Evaders for Audits – Allyson Versprille and David Hood, Bloomberg ($). “The IRS would get access to more data to improve how it selects potential tax evaders for audit under President Joe Biden’s plan to impose a new reporting requirement on financial institutions, such as banks.”

Biden’s American Families Plan would require banks and other financial institutions to add information on aggregate account outflows and inflows to their annual reports to the IRS, the Treasury Department said in a news release Wednesday outlining the tax compliance components of the plan. The department said the extra information would 'help improve audit selection so it can better target its enforcement activity on the most suspect evaders, avoiding unnecessary (and costly) audits of ordinary taxpayers.'

Treasury calls for crypto transfers over $10K to be reported – Laura Davison and Christopher Condon, Accounting Today. “The U.S. Treasury said the Biden administration’s proposal to strengthen tax compliance includes a requirement for transfers of at least $10,000 of cryptocurrency to be reported to the Internal Revenue Service. ‘As with cash transactions, businesses that receive cryptoassets with a fair-market value of more than $10,000 would also be reported on,’ the Treasury Department said in a report on tax-enforcement proposals released Thursday.”

Treasury issues Guidelines for Shrinking Tax Gap – Jay Heflin, Eide Bailly. “The Treasury Department has released guidelines for how the Biden Administration intends to close the Tax Gap, which is the difference between the taxes that are owed and what is collected.”

Taxpayers avoided billions in withholding taxes – Michael Cohn, Accounting Today. “Billions of dollars in underreported taxes by employers and backup withholding for their employees are helping fuel the tax gap, according to a new report. The report, released Thursday by the Treasury Inspector General for Tax Administration, found the IRS is still not making enough progress on improving federal tax withholding processes and procedures despite previous reports from TIGTA about the problem.”

Biden’s Tax Math for $4 Trillion Runs Into Congress Scorekeepers – Allyson Versprille and Colin Wilhelm, Bloomberg ($). “The Biden administration’s $4 trillion economic agenda is at risk of getting tangled up in the calculations of Congress’s budget scorekeepers. Where the Treasury Department sees improved tax collection generating $700 billion in new revenue over a decade to help pay for programs, the Congressional Budget Office’s guidelines and own estimates may result in the legislative agency projecting nowhere near that.”

And while that gap may seem modest by the gargantuan numbers of Washington spending, it threatens a host of political difficulties, not least of which is making it harder for the White House to pass the plan without the support of Republicans. GOP lawmakers have said raising taxes and repealing parts of the 2017 tax overhaul are non-starters.

When will capital gains taxes spike? Advisors look to next week for clues – Lynnley Browning, Accounting Today. “Just how much money are wealthy clients about to lose amid looming higher taxes on their investment profits? Advisors and market watchers are anxiously looking to next week to finally shed light on the red-hot question. An all-but-certain increase in the capital gains rate, a hike championed by President Biden that the Democrat-controlled Congress will need to approve, has spawned a giant parlor game for the affluent. When will Biden’s proposed increase go into force? And just how high will the new tax rate be?”

The Hiring Incentive to Return Employment (HIRE) Act of 2021 would increase the work opportunity tax credit to 50 percent for the first $10,000 in wages for all groups targeted by the credit for two years, according to a May 20 release from Rep. Thomas R. Suozzi D-N.Y., who introduced the bill with fellow Democratic taxwriters Steven Horsford of Nevada, Donald S. Beyer Jr. of Virginia, Bradley Scott Schneider, of Illinois, and Gwen Moore of Wisconsin.

Details on the legislation can be found here.

The Expanding Child Tax Credit and What to Watch For – Marie Sapirie, Tax Notes. “Expanding the child tax credit in the American Rescue Plan Act of 2021 (ARPA, P.L. 117-2) marked an inflection point for social welfare programs in the tax code. The increase in the credit’s value and eligibility changes for households with very low incomes also marked an increase in the progressivity of the tax system. Although the extension of the ARPA’s changes beyond 2021 is still pending, there will be plenty to watch for as the temporary changes are rolled out.”

How High Are Federal Interest Payments? – Committee for a Responsible Federal Budget. “This year, the federal government will spend $300 billion on interest payments on the national debt. This is the equivalent of nearly 9 percent of all federal revenue collectionand over $2,400 per household.The federal government spends more on interest than on science, space, and technology; transportation; and education combined. The household share of federal interest is larger than average household spending on many typical expenditures, including gas, clothing, education, or personal care.” 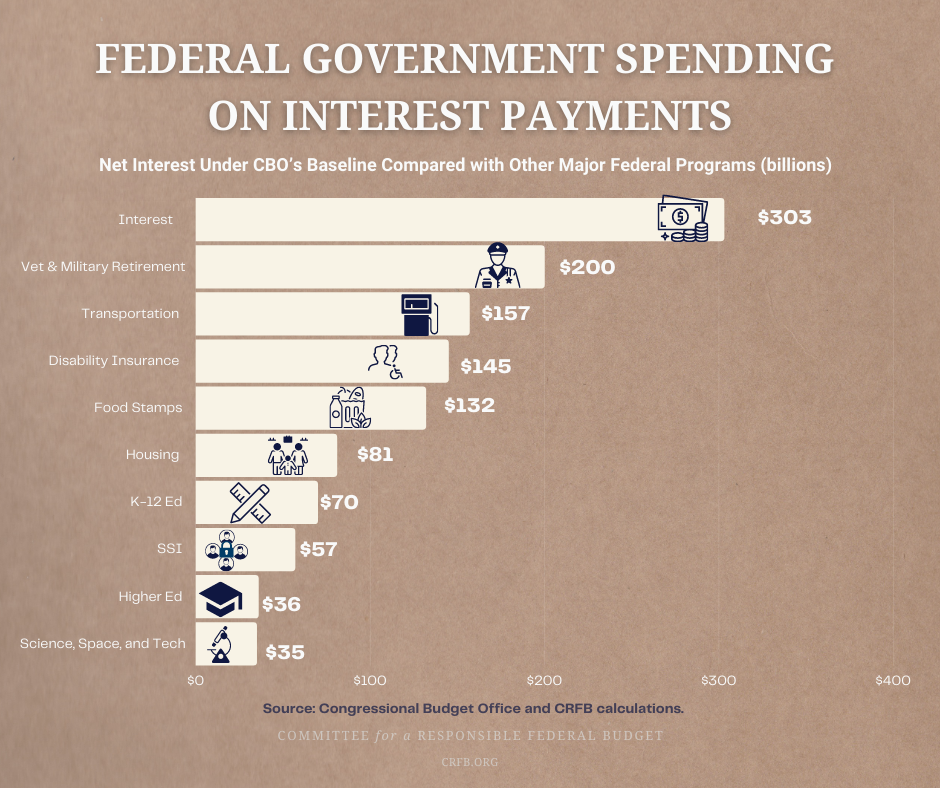 The Ninth Circuit, in an unpublished per curiam opinion, affirmed a district court’s dismissal of a couple’s complaint against the government and another entity, finding that their quiet title, interpleader, and declaratory relief claims are moot because the government released the federal tax liens on which the claims were based. The court also found that the government had not waived its sovereign immunity regarding the interpleader claim.

Oklahoma Corporate, Personal Tax Cuts Head to Governor’s Desk – Paul Stinson, Bloomberg ($). “The Oklahoma Senate passed separate measures Thursday that would cut the state’s corporate and personal income taxes in a bid to bolster the state’s competitive edge to attract new business. The Senate voted 34-12 for a bill (H.B. 2960) that would reduce the state’s corporate rate to 4%, from 6%. It also passed a separate measure in a 37-9 vote (H.B. 2962) that would drop the top personal income tax rate to 4.75%, from 5%. The bills, approved earlier by the House, now head to the desk of Gov. Kevin Stitt (R), who is expected to sign both.”

Oregon kicker rebate of $1.4 billion? Tax revenues up $1 billion in ‘stunning’ forecast – Hillary Borrud, The Oregonian. “Oregon is on track to bring in an additional $1 billion in tax revenues this budget cycle and could pay out a “kicker” tax rebate of up to $1.4 billion, state economists told lawmakers Wednesday afternoon. It’s a dramatic rebound from the down forecast one year ago and state leaders described the news in shocked and colorful terms.”

Nebraska Lawmakers Approve Phasing Out Tax on Social Security – Donna Borak, Bloomberg ($). “Nebraska lawmakers unanimously approved a plan to phase out taxes on Social Security income until eliminating them altogether in 2030. The bill sponsored by Sen. Brett Lindstrom (R) of Omaha, which passed 41-0, is expected to be signed by Gov. Pete Ricketts.”

Ohio House moves to change pandemic rules for commuter taxes – Anna Staver, The Columbus Dispatch. “Ohioans working from home in 2021 could end up paying taxes to the city where they live – not where their company has an office – if a bill moving through the state House becomes law. House Bill 157, which Republicans passed out of committee Tuesday, would let Ohioans file for municipal income tax refunds for any days they worked from home in 2021."

A law passed during the pandemic lets cities collect taxes as if workers commuted to their offices until 30 days after Ohio's state of emergency ends. Right now that would be Aug. 23.

Global tax proposal may hit tech hardware, Morgan Stanley says – William Horobin and Isbel Gottlieb, Accounting Today. “Technology hardware, health care and pharmaceutical companies would be most impacted by U.S. proposals to rewrite global tax rules, according to an analysis by Morgan Stanley. President Joe Biden’s initiative to make the world’s biggest and most profitable 100 or so corporations pay more where they operate rather than where they are headquartered could raise the median effective rate for nine tech manufacturers to 26% from 14.4%, the bank said in a report this week.”

U.S. Treasury Offers 15% Minimum Corporate Tax in Global Talks – Richard Rubin, Wall Street Journal ($). “The U.S. will accept a global minimum corporate tax rate as low as 15% in international negotiations, below the 21% level it has been seeking for U.S.-based companies’ foreign income, the Treasury Department said Thursday. The move could make it easier to reach the multilateral agreement that Treasury Secretary Janet Yellen has been seeking, but an agreement at 15% would raise less revenue for governments. And, depending on where the U.S. sets its policies, a 15% minimum tax on companies headquartered outside the U.S. could give those businesses an advantage over those based in the U.S.-based.”

READOUT: U.S. Department of the Treasury’s Office of Tax Policy Meetings – Treasury Department. “Over the last two days, leaders from the Office of Tax Policy at the U.S Department of the Treasury participated in meetings with the Steering Group of the Inclusive Framework on base erosion and profit shifting (BEPS) as part of the Organization for Economic Cooperation and Development (OECD) / G20 international tax negotiations. As part of those meetings, discussions on the global corporate minimum tax rate began in earnest. “

Treasury expressed its belief that the international tax architecture must be stabilized, that the global playing field must be fair, and that we must create an environment in which countries work together to maintain our tax bases and ensure the global tax system is equitable and equipped to meet the needs of  for the 21st century global economy.

Red-Hot SPAC Market Cools After Accounting Warning – David Schultz, Bloomberg ($). “The market for special-purpose acquisition companies, or SPACs, was all the rage over the last year, with exponential asset growth in just a few months plus the involvement of celebrities like R&B singer Ciara and former Yankees slugger Alex Rodriguez.”

Tip your waitresses and waiters! It’s National Waitstaff Day! Take a moment to appreciate a group of workers who have had a rough ride during the pandemic.