Treasury said in the information sheet that states and territories can’t use the funds “to directly or indirectly offset a reduction in net tax revenue due to a change in law from March 3, 2021 through the last day of the fiscal year in which the funds provided have been spent.”

Treasury Rule on State Tax Cuts Limitation Raises New Questions - Jared Walczak, Tax Policy Blog. "Imagine if, for instance, a state reduces the size of its drug enforcement budget within law enforcement and corrections agencies following the legalization of marijuana. At the same time, suppose that the Department of Corrections uses federal dollars to treat coronavirus cases in prisons, or the Department of State Police uses funding to offset salaries or provide supplemental pay for officers. In neither case would these federally financed expenditures in any way offset the savings from reduced drug enforcement, yet it appears that the federal government would prohibit using these savings to help finance a tax reduction, since they coexist in the same department or agency."

IRS Hopes New Guidance Clarifies COBRA Subsidy Eligibility - Kristen Parillo, Tax Notes. "A comprehensive IRS notice will be issued soon explaining how employers can apply for a new tax credit for providing health coverage to employees who were involuntarily terminated or had their hours reduced... The COBRA premium subsidy is available for up to six months (from April 1 to September 30), and employers that provide it are entitled to a refundable tax credit for the subsidy amount."

Dem Plan For Capital Gains Tax Hike Has Many Moving Parts - Alan K. Ota, Law360 Tax Authority ($). "Several senior Democrats said Biden's plan to tax the investment profits of those earning at least $1 million at the proposed top individual rate of 39.6% — up from the current top capital gains rate of 20% — would trigger a sweeping review of the current tax framework for all investors."

Treasury Secretary’s IRS Praise Sparks Backlash From Those Who Must Deal With The Tax Agency - Amber Gray-Fenner, Forbes:

Is the IRS broken? It depends on whom you ask. Yesterday Treasury Secretary Janet Yellen tweeted “It’s a stunning achievement. In the midst of a crisis, the IRS has put on a masterclass in implementation and how the machinery of government should work.” The pushback from tax industry professionals was immediate and vehement.

Brian Streig, CPA and Tax Director at Calhoun, Thomson & Matza, LLP in Austin, Texas, responded “Yes, the IRS did a great job at implementing CARES Act and other Covid tax law changes. But, the IRS has completely failed American taxpayers in their primary function of processing tax returns, issuing refunds, and handling notices.”

Tax professionals were quick to note the backlog of 29 million unprocessed paper filed returns and the fact that the IRS, despite being so woefully behind in processing the mail, continues to send taxpayers notices of non-compliance concerning items that their tax professionals were required to file or respond to by mail or fax and that remain unprocessed. In other words, the answers to new notices are sitting in a pile of unprocessed mail and faxes sent well before the new notice was issued.

Iowa Legislators OK Pass-Through Composite Tax Returns - Abraham Gross, Law360 Tax Authority ($). "S.F. 608, which passed the state House of Representatives without opposition on Friday, would require pass-throughs to file composite returns to report the state income of nonresident members and establish a new credit for those members in the amount of the tax paid on their behalf by the entity."

S.F. 608 is a big change in Iowa law. Iowa currently only allows pass-through entities, such as partnerships and S corporations, to file composite returns under limited circumstances for non-Iowa owners. Iowa has a withholding provision for non-resident owners, but it is awkward, unclear and often ignored.

The Governor is expected to sign. The new provisions will take effect in 2022.

Washington State Governor Signs into Law Excise Tax on Certain Capital Gain Income - Adam Sweet and John Gupta, Eide Bailly. "Generally, this new legislation imposes a 7% tax on the net annual amount of long-term gains from the sale or exchange of stocks, bonds, and other capital assets in excess of $250,000 (for both single and married filing joint filers)."

Also: "Only individual Washington state residents are generally subject to this new tax. This includes individuals allocated a share of long-term capital gain from a pass-through or disregarded entity, such as a partnership, S corporation, grantor trust, or limited liability company taxed as one of the former."

But Washington's prohibition against income taxes means courtroom fights ahead of the 2022 effective date.

Taxing Capital – An International Comparison - Jacob Lundberg, Johannes Nathell, Tax Policy Blog. "Among the 30 OECD countries for which data is available, the average tax burden on all types of capital income is 29 percent, with a range from 9 percent in Lithuania to 50 percent in Canada. In general, English-speaking countries tend to have high capital taxes and Eastern European countries tend to have the lowest capital taxes... Taxes on capital include individual capital income taxes and the corporate income tax as well as property and transaction taxes." 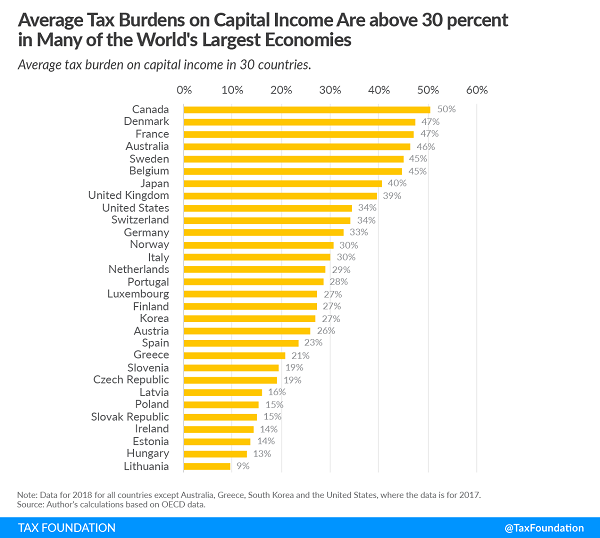 5 tax tasks to take care of by May 17 - Kay Bell, Don't Mess With Taxes. "1. Contribute to an IRA: Putting as much as you can into an individual retirement arrangement, or account as most of us call it, is always a smart move. The IRA will grow over the years, giving you some cash when you're ready to call the cubicle farm quits."

So, for example, if someone who works as a CPE instructor (such as I do) flies to a city to give a CPE session, we look to see if the primary purpose of the trip is for business to determine if the travel costs will be deductible.  Normally the answer will be yes, as I would have traveled to the city at the request of a customer located in that city.  Normally I would be in the city only for the days when I am presenting a session, and only incidentally would I spend time on personal pursuits.

But if I was heading to a city for a major family event, spending two weeks with family, managing to arrange to give a one-day CPE session while in that location would not make the travel deductible except for expenses directly related to that one day continuing education session.  Such costs would be those costs I would not have incurred on the trip but for giving that CPE session.

The “Mis” STEP Act – What it Means To Your Estate and Income Tax Plan - Roger McEowen, Agricultural Law and Taxation Blog. "Will the STEP Act become law as proposed?  Probably not.  But, combined with S. 994 the two proposals offer dramatic changes to the rules surrounding income tax, as well as federal estate and gift tax."

Laws Need to Work Together and Make Sense - Fix Section 6050P - Annette Nellen, 21st Century Taxation. "The District Court of New Jersey issued a ruling that reminds us all (again) that getting a Form 1099-C doesn't mean that the debt was discharged, it just means the lender met one of the seven requirements of the regulations under Section 6050P to issue a 1099-C."

The Dubious Anonymity Of Crypto Currency Transactions - Peter Reilly, Forbes. "One of the fallacies that is floating around about cryptocurrencies is that they are a legitimate tool for avoiding taxation. On a recent episode of the podcast Game of Roses, the host who goes by Bachelor Clues got into that a bit noting that if you bought a Tesla with bitcoin there would be no tax, since no dollars were exchanged."

As Peter explains, Bachelor Clues is short a clue here.

Related: Bitcoin — What Should You Know.

Bozo Tax Tip #4: The $0.55 Solution - Russ Fox, Taxable Talk. "About sixteen years ago one of my clients saved $2.42 (I think that was the cost of a certified mail piece then) and sent his return in with a $0.37 stamp. It never made it. He ended up paying nearly $1,000 in penalties and interest…but he did save $2.42...There’s a reason every client letter notes, 'using certified mail, return receipt requested.'"

King of Kerguelen. It's a rare Tax Court opinion that throws in a geography lessen at no extra charge, but it happened yesterday:

In 1772 Yves-Joseph de Kerguelen-Trémarec was commissioned by King Louis XVI to sail into the Southern Ocean in search of Terra Australis. He found instead a small archipelago almost three thousand miles off the southern tip of Africa, inhabited only by wildlife and battered by some of the worst weather in the world. In English, these small patches of rock are named the Desolation Islands. This is apt, for they are an awful place — thousands of miles from the nearest inhabited territory, windswept, bereft of useful resources; and home only to weather researchers, scientists of the extreme, and a very large number of penguins. They are still a part of France, but so insignificant a part that the French have grouped them with several rocks collectively called “Îles Éparses de l'océan Indien” (Scattered Islands of the Indian Ocean) into a district within the French Southern and Antarctic Lands — itself one of France's overseas territories, but a territory with no civilian population at all.

So what does this have to do with tax?

In April 2006 federal agents in Arizona, acting under the authority of a search warrant and looking for evidence of insider trading and money laundering discovered several license plates for the Kingdom of Kerguelen in the personal office of Ira Gentry. They also found a Quebecois birth certificate in the name of Don Williams and a passport from Kerguelen. The photo in this passport was of Mr. Gentry. Across town, other agents were looking for Randy Jenkins. They found him in possession of not just an ordinary Kerguelenois passport, but a Kerguelenois diplomatic passport, an ID card from the Kingdom of Kerguelen's Ministry of Transportation, and several more of the Kingdom's license plates. This is all quite odd — for the Kerguelen Islands have never been a sovereign nation. And they have certainly never been a kingdom.

If the penguins of those islands could speak, they would say: “Something's fishy” (or perhaps “C'est chelou”).

Unfortunately, Kerguelen and its penguins fade from the case, which centers on whether one of the Keruelenois passport holders should be taxed directly on income paid to corporations incorporated in the Bahamas, Belize and Arizona. In this case, the court ruled that yes, they should.

The Moral? Just because it's part of France doesn't mean the food is any good.

Hungry?  Today is "National Eat What You Want Day." If you crave a cheeseburger with jelly, it's your day!